Apple, earlier this year, had announced a host of new services which included Apple tv+, Apple Arcade, Apple News+ etc. In its World Wide Developer Conference or WWDC held today in San Jose, Apple has announced some new features and additions to its Apple tv+ service and Apple Arcade, and for the Apple tvOS in general. 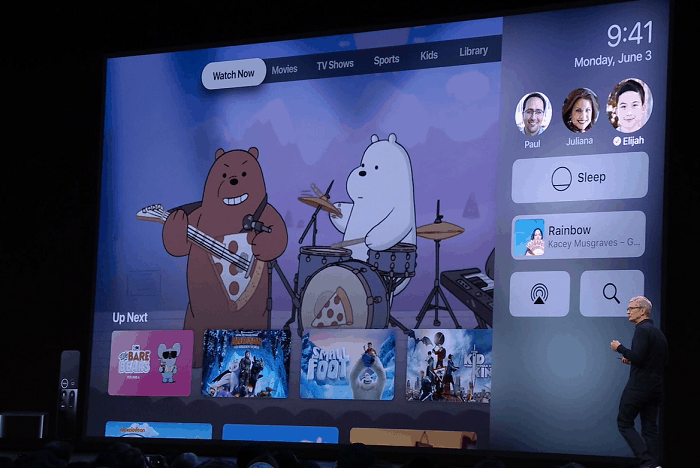 Since the Apple tv is meant to be viewed by multiple members of the family, the suggested playlist and recommended content was all appearing in a single place as a list, which was inconvenient for viewers who received suggestions for the content they didn’t want to watch. This issue has now been addressed and tvOS will now allow users to create multiple accounts on their Apple tv which can be logged into by the specific users and multiple accounts can be switched to or from the control centre, which looks similar to that on the iPhone or iPad.

Another improvement to tvOS is that icons are now less cluttered and content now appears as multiple, larger icons for better visibility and usability. Apple tv can now also play content from Apple Music directly on tvOS and the best addition to this platform is the new lyrics feature where the lyrics of the playing song will now scroll through on the Apple tv screen. The Apple tv also gets some new screensavers with some 4K HDR shots showing scenic underwater beauty.

Talking about Apple Arcade, Apple’s gaming service, the platform now supports third-party controllers and joysticks like the Xbox One S controller from Microsoft and the Sony PlayStation 4 Controller as well, which can improve the gaming experience multifold, and also saves users the extra cost of purchasing a proprietary gaming controller.

The Apple tvOS update will be available to download for users starting later this fall.