At the ongoing Worldwide Developers Conference in San Jose, Apple has announced a new version for its Apple Watch, the watchOS 6. The new update brings along a series of improvements, in addition to the inclusion of an independent App Store, new watchfaces, and new apps. 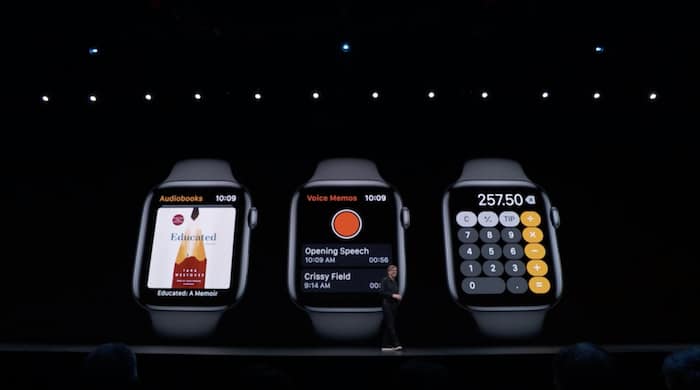 To begin with, the all-new watchOS 6 introduces a set of new watchfaces, adding to the existing lineup of watchfaces that has been updated over the years. The new watchfaces highlight different graphic designs and come with the ability to add more information and personalize accordingly. In addition to new watchfaces, watchOS 6 also introduces new apps like Audiobooks, Voice Memos, and the highly-requested, Calculator app. Apple says that the new apps will be able to run independently and no longer require a companion iPhone. Additionally, new APIs will also allow apps to stream audio directly to the watch and read data for a longer period of time.

Apart from watchfaces and new apps, watchOS 6 gets a major update with the inclusion of an independent App Store that will allow users to browse apps, find favorite apps, search apps, and purchase and install apps directly on the watch, without requiring an iPhone. Apple says that with the addition of an independent App Store on the watch, users will now be able to download software updates directly to the watch.

As for health and fitness, Apple announced a bunch of new features, in addition to a new ‘Trends’ option that allows users to see how their activities compare over time as well as Highlights and Favorites. In addition, there’s also an inclusion of the ‘Cycles’ options, which allows users to track their menstrual cycles with Apple Watch.

Along with updates to watchOS, Apple also introduced new watch bands, that it says would go perfectly with the all-new watchfaces that it announced with watchOS 6.

watchOS 6 will be available this fall as a free software update for Apple Watch Series 1 or later paired with iPhone 6s or later running iOS 13 or later, with the developer preview available to Apple Developer Program members starting today.

Was this article helpful?
YesNo
TechPP is supported by our audience. We may earn affiliate commissions from buying links on this site.
Read Next
With Football Manager 2023 Touch, Apple Arcade finally has its “killer ...
#apple #watchOS 6 #wwdc #WWDC 2019