Along with improvements and updates for tvOS, watchOS, and iOS, Apple has also today introduced a new OS at its annual Worldwide Developers Conference. The new OS, called, iPadOS, stems out of iOS and emerges into an OS, specifically for the iPad. Over the years, Apple has been emphasizing on its iPad as a device that could replace the computer, in a lot of ways. And continuing on that trend and making the iPad stand up to the high-demanding user requirements, it has now introduced a separate OS for its iPads. 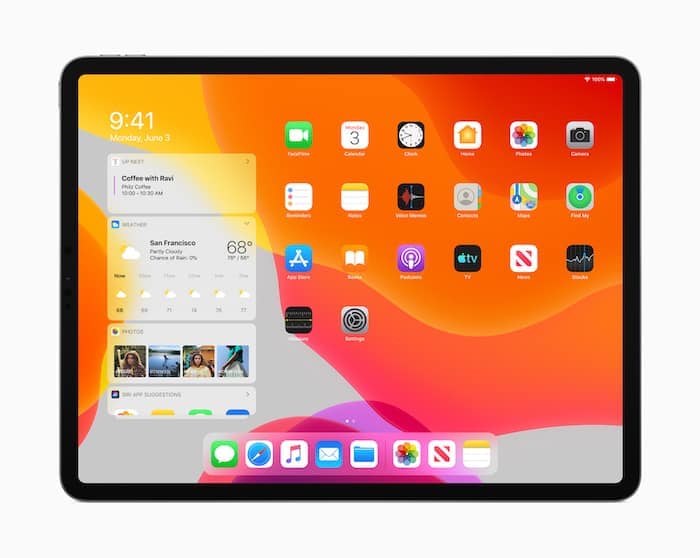 In a series of updates to the iOS, Apple has, over the years, announced various sets of features like split screen, multitasking, in addition to different tweaks, to increase the versatility of the iPad. With the iPadOS, it is introducing new ways to work with apps in multiple windows, get more information on a redesigned Home screen, and more ways to use Apple Pencil. The new Home Screen has been redesigned with a new layout to show more apps on each page and allows the Today View, to be added for quick access to widgets like headlines, weather, calendar, events, tips, and more.

To increase multitasking and allow users to do more on their device, Apple is introducing Split View – to allow users to work with multiple files and documents from the same app simultaneously and Slide Over – quickly view and switch between multiple apps. Additionally, to make it easier for users to check on different tasks, it is also introducing App Exposé, which provides a quick view of all the open windows.

Apple is also making efforts to better integrate Apple Pencil into the iPad experience by allowing users to mark up and send webpages, documents or emails on iPad by swiping Apple Pencil from the corner of the screen. It is also introducing a redesigned tool palette with access to different types of tools. In addition to these, Apple is also introducing new updates to Safari. And with the all-new iPadOS, it will be automatically presenting the desktop version of the website, scaled appropriately for the iPad display. Additionally, it will also add new features like download manager and 30 new keyboard shortcuts and enhancements to tab management on Safari.

Further, Apple is also improving Files and introducing some new features and enhancements, starting with iCloud Drive support for folder sharing. With this, anyone with access to a shared folder will now be able to see it in iCloud Drive and will always have access to the latest version. Apple is also bringing a new Column View with high-resolution previews in the Files app that will allow users to users navigate directories, along with support for Quick Actions such as mark up, rotate, and create PDF. In addition, iPadOS will also support external drives, which will allow users to easily plug in USB drives, SD cards or log into an SMB file server, all from within the Files app.

iPadOS will be available this fall as a free software update for iPad Air 2 and later, all iPad Pro models, iPad 5th generation and later and iPad mini 4 and later, with the developer preview available to Apple Developer Program members starting today and a public beta program available to iPadOS users later this month.

iPadOS 14 Announced: Features, Availability, and More
Apple doubles down on Privacy with iOS 14, iPadOS 14, and…
How to Use Quick Notes on iPad in iPadOS 15
Apple iPad Air 4th-gen vs 11-inch iPad Pro: What's New and…
How to Download and Use Safari Extensions on iOS 15 and…
Apple announces new 16-inch MacBook Pro with Magic Keyboard