Apple today announced a new high-end MacBook Pro, which comes in a 16-inch size and a completely redesigned keyboard, and replaces the existing 15-inch model. What’s different about this announcement is that the laptop will be available for pre-order starting today, unlike other Apple announcements where products go for pre-order much later after they are announced. 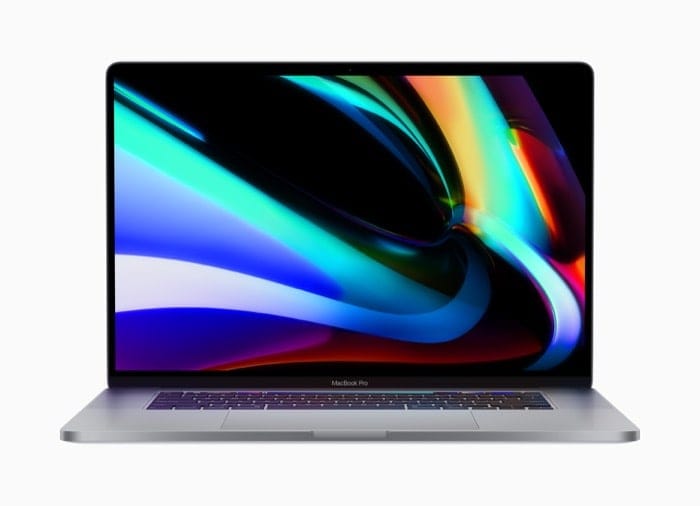 The display on the new MacBook Pro is Apple’s retina display that stretches 16-inches diagonally and offers a 3072 x 1920 pixels screen resolution at 226ppi, which is slightly higher than the 2880 x 1800 pixels found on the earlier 15-inch model. Further, comparing the 16-inch model with the 15-inch MacBook Pro, the newer model appears to be marginally bigger and heavier, but nothing too drastic.

One of the aspects where the difference becomes noticeable is Apple’s approach to this year’s keyboard. After being constantly bombarded with complaints related to various issues on its butterfly mechanism, it seems like Apple has finally paid attention and come up with a better mechanism. Apple calls the new keyboard, ‘Magic Keyboard’, and it features a scissor mechanism that replaces the butterfly mechanism found on earlier models. It says it has redesigned the new Magic Keyboard to offer a stable key feel and 1mm of key travel for a better typing experience that is comfortable, satisfying, and, most importantly, quiet. Additionally, the new keyboard also includes a physical Escape key, along with an inverted ‘T’ arrangement for the arrow keys.

The 16-inch Macbook Pro comes with 6-and 8-core 9th-generation processors with Turbo Boost speeds up to 5.0 GHz. Apple says the new processors make the new MacBook Pro up to 2x faster than the quad-core 15-inch MacBook Pro. Coming to graphics, the new MacBook Pro features the new 7nm AMD Radeon Pro 5000M series graphics that come with GDDR6 video memory and 8GB VRAM option. Furthermore, the new laptop offers up to 64GB of RAM, most ever on Apple’s laptop to date, along with 1TB of SSD on the standard configuration, which can be upgraded to a staggering 8TB.

With that much processing power under the hood, the new MacBook Pro comes with advanced thermal architecture to keep the air circulation going and prevents internal components from frying. The new fan design features larger impeller with bigger vents to offer a 28 percent increase in airflow, in addition to a 35 percent larger heat sink that offers significantly more heat dissipation than before. 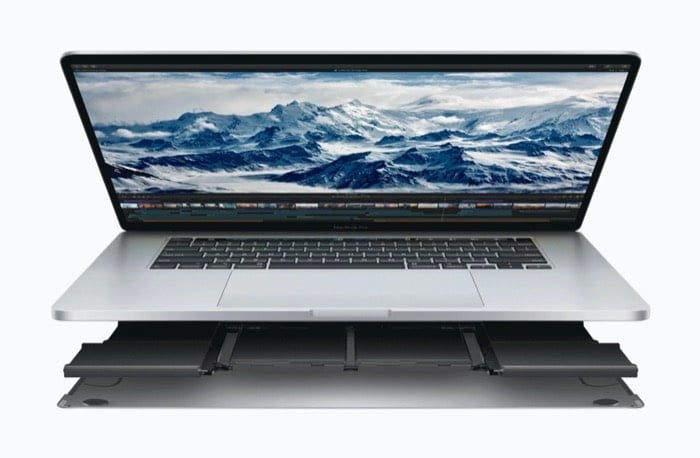 The new MacBook Pro also gets an upgrade in the audio department and includes a redesigned six-speaker, high-fidelity sound system, which comes with Apple’s force-canceling woofers that uses dual opposed speaker drivers to reduce the unwanted distorted sound caused due to vibrations. Apple says the new speaker system offers a 40 percent reduction in such unwanted noise and provides an improved signal-to-noise ratio.

To power everything, the 16-inch Macbook Pro comes with a massive 100Wh battery, which Apple says is the largest on its notebook lineup ever. Apple says the 100Wh battery can offer up to 11 hours of wireless usage on a single charge.

The 16-inch MacBook Pro starts at $2399 for the standard configuration and can go significantly higher with upgrades. It will be available for pre-order starting today and will go on sale in the US later this week. As for its availability in other parts of the world, Apple says that the new MacBook Pro will soon be available in other countries. Talking about India pricing, the 16-inch MacBook Pro starts at INR 1,99,900 for the standard configuration.

Alongside the new 16-inch MacBook Pro, Apple has also announced the all-new Mac Pro and Pro Display XDR, which build upon the previous generation and include a few updates. The Mac Pro is priced at $5,999, and it comes with Xeon processors up to 28 cores, up to 1.5TB of memory capacity, eight PCIe expansion slots, up to 4TB of SSD storage, and more. On the other hand, the Pro Display XDR features a 32-inch 6K Retina display with 1,000,000:1 contrast ratio, P3 wide color gamut, and is priced at $4,999. In terms of availability, both Mac Pro and Pro Display XDR will be available in the US starting December.