[First Cut] Samsung Galaxy A51: Another A Grade Performer?

The Galaxy A50 was one of the surprise hits for Samsung in 2019. The brand built on it by launching the Galaxy A50s, a slightly better-specced variant, later on the year, which again got a good reception. And now the brand has got 2020 underway with the next in the series, the Samsung Galaxy A51. 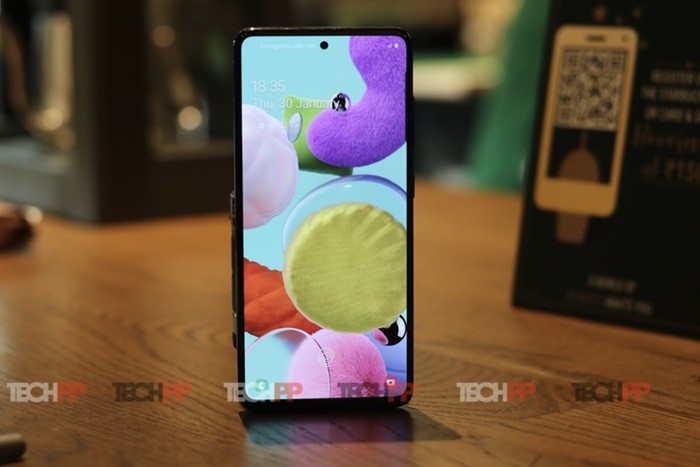 The phone is roughly the same length as the Samsung Galaxy A50s but is less wide and a bit thicker. The back of the phone is right from the Galaxy A50 series, being mainly what many call “glastic” (carbonate that looks like glass), and has a similar reflective pattern and texture like its predecessors. It reflects colors in rainbow patterns in which Samsung calls a prism crush design. It is not as unique as it once seemed but is still striking enough. And the phone itself cuts a smart figure from the back, although it picks up smudges and stains way too easily for comfort. The similarities extend to the specs to an extent as well. Both phones have Super AMOLED full HD displays, are powered by Samsung’s Exynos 9611 chip, both have a 48-megapixel main sensor, in-display fingerprint scanners, 128 GB storage (expandable to 512 GB) and both have 4000 mAh batteries with support for 15W fast charging. And alas, neither has dust or water resistance. 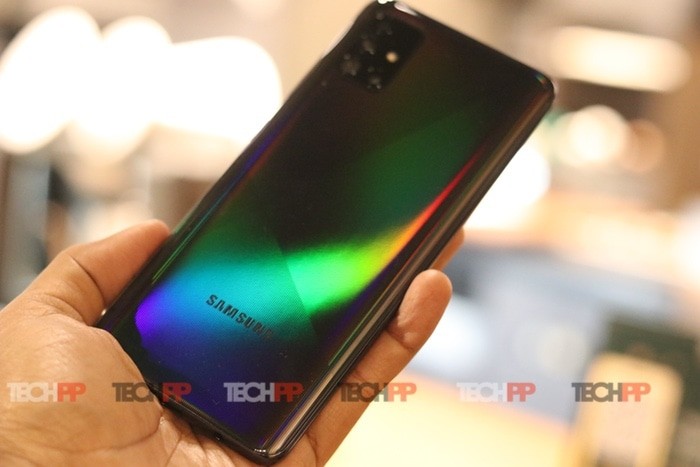 But there’s a lot there’s new here as well. For one, while the displays are both Super AMOLED, the Samsung Galaxy A51 comes with a larger 6.5-inch one, and with a punch hole notch (an Infinity O display as compared to the Infinity U on the A50s), which is far less intrusive. RAM has also been bumped up to 6 GB and 8 GB, up from 4 GB and 6 GB, and well, while the main camera sensor remains 48 megapixels, there are now three other cameras with it – a 12-megapixel ultrawide, a 5-megapixel macro (the first one on a Samsung phone in India) and 5-megapixel depth sensor.

The front camera in that punch hole notch is a 32-megapixel one, further adding to the camera muscle of the device (there are shooting modes and scene identification options on board too!). And rather significantly, it comes with Android 10 right out of the box with Samsung’s less cluttered OneUI interface on top of it. What’s more, Samsung has even added some deft touches to its messaging app, segmenting regular messages from offers and the like. There is an intelligent multilingual keyboard out there as well. Rounding off the software goodness are optimizations for gamers. 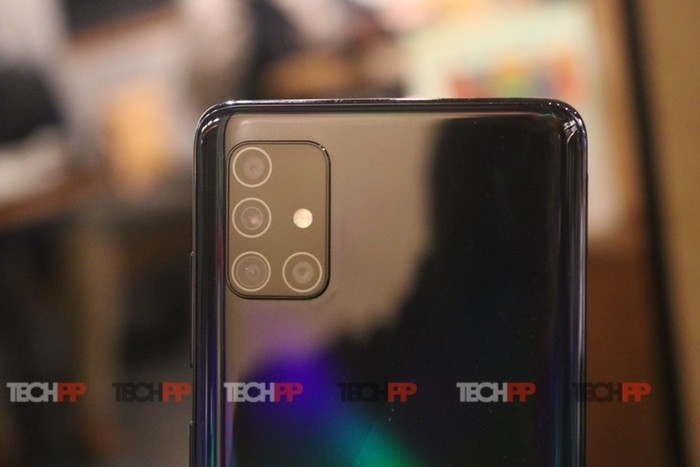 All in all, the Samsung Galaxy A51 seems a significant move up from the Galaxy A50s in both hardware and software terms – the display is bigger, there is more camera muscle at front and back, and while the processor remains unchanged, the software has been bumped to Android 10 (still a rarity in the Indian market). The phone also moves up a notch in terms of price, starting at Rs 23,999 as compared to Rs 20,999 for the Galaxy A50s and Rs 19,990 for Galaxy A50. Though it is mainly targeted at the offline market but there’s no denying that at Rs 23,999, the Galaxy A51 will run into tough competition from a number of online players like the Redmi Note 8 Pro, the Realme X2, the upcoming Poco X2 and its own sibling, the Galaxy M30s, which many say has been Samsung’s bestselling device of the previous quarter, and which offers a similar processor, a 48-megapixel main camera and a massive 6000 mAh battery at a lower price. Will the Samsung Galaxy A51 be able to repeat the success of its predecessors and live up to the “awesome” tag that accompanies it? Stay tuned for our review to find out.