Samsung has been trying to wriggle its way back into the mid-segment of the smartphone market and one of its biggest weapons to accomplish that mission is the M series. The smartphone brand has stepped into the online market and one of its biggest hits has been the M series, helping it gain some ground on the competition (check our stat story on online phone sales). It has now introduced a new smartphone in the series, the Samsung Galaxy M30s. The smartphone, as its name indicates, comes as an upgrade of the previously launched Galaxy M30, which we had called “one of the best in its price range” (read our review). 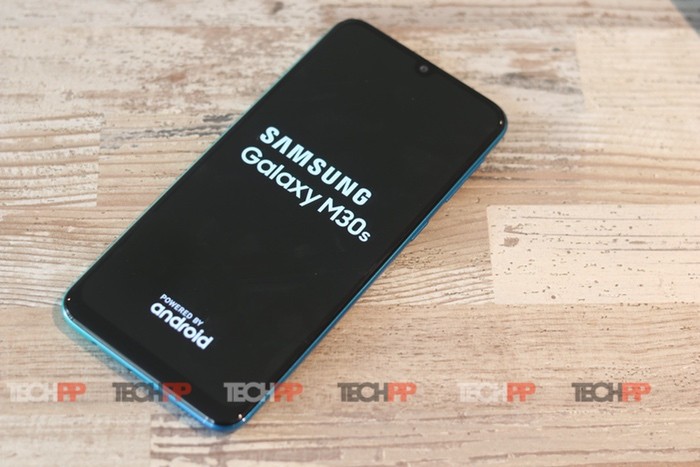 Samsung has been throwing AMOLEDs and Super AMOLED displays in the mid-segment like confetti, making it a much more familiar feature in the price range. The Galaxy M30s also comes with a Super AMOLED front, a 6.4-inch full HD+ one. The face of the phone is all about the tall display. There are very thin bezels on the three sides while a slightly thicker chin sits below it. Above the display is a drop notch that carries the front-facing camera. The display seems to be bright and colorful, in the best Super AMOLED tradition. 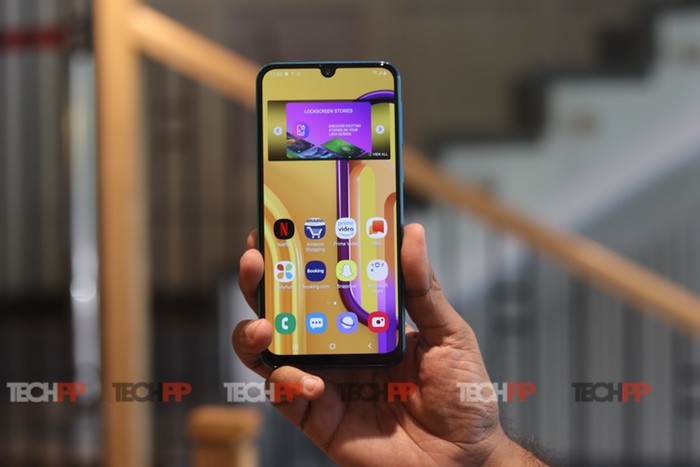 Flip the phone around and you will find a glitter-laden polycarbonate back encasing the phone. We received the blue unit with gradient finish. The color of the back deepens as it transitions from right to left. There is a squoval camera unit on the top left corner of the phone that carries a triple camera setup and LED flash. Slightly below the camera unit, you will find the physical fingerprint scanner (a bit of a surprise when you consider most AMOLED display devices in this price point have an in-display scanner) and right under it is the Samsung branding. The back of the phone curves out and extends all the way to the edges and meets the display on the front – there is no different material for the frame in between the back and the front of the phone.

The left side of the frame carries the dual SIM card and microSD card tray while the right side carries the volume rocker and the power/lock button. The top of the Galaxy M30s is plain while the base of the phone carries the speaker grille, the USB Type C port and the 3.5 mm audio jack. 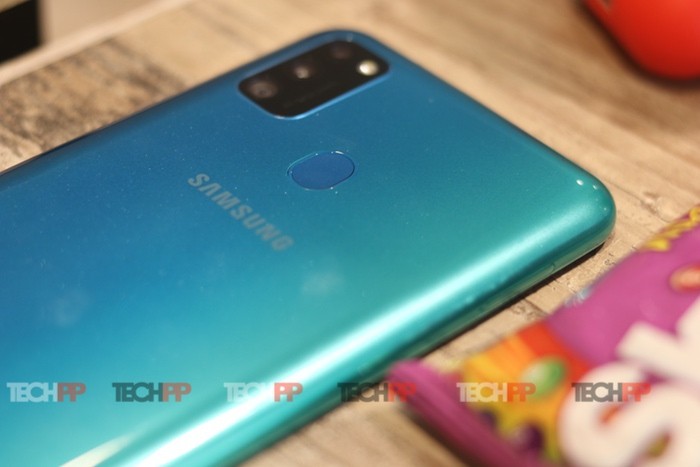 In the world of thin bezels, glass backs and different notches, the Galaxy M30s does not bring anything too exceptional to the table in terms of design. The squoval camera unit is striking but not in a positive way. It will get your attention but will not make you go wow. The rest of the design is not bad but it is not really stand out either. It is a mid-segment phone and hardly tries to hide that fact.

Specs that take it up a notch

The Galaxy M30s might not have an extremely eye-catchy design but Samsung has surely tried to put in some big numbers inside the hood to help it stand out. The phone comes with a 6.4-inch full HD+ Super AMOLED display with 420 nits peak brightness. Which means not only is there a lot of display but it should be very rich and colorful too. It also has Widevine L1 certification which means you will be able to stream high- definition content without any issues. 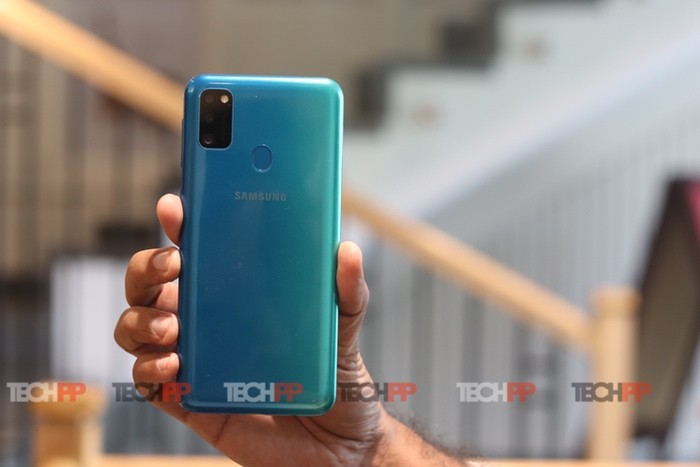 Powering the Galaxy M30s is the Samsung’s in-house octa-core Exynos 9611 processor bundled with 6 GB RAM and 128 GB storage. The storage can be expanded up to 512 GB via microSD card and because there is a dedicated space for the memory card, you will not have to sacrifice either one of your networks for storage. The phone will also be available in a 4 GB/ 64 GB variant. 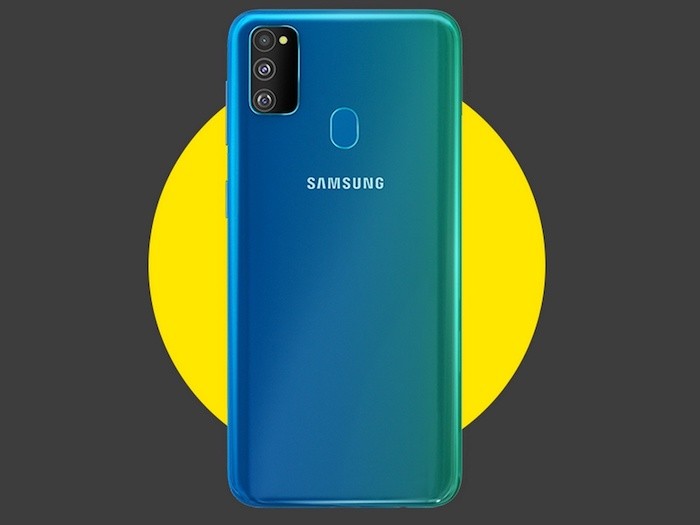 The M30s also brings a triple camera setup to the table, just like its predecessor. However, the brand has taken its megapixel game up a notch, giving it the “s” factor – its primary camera consists of a 48-megapixel main sensor with f/2.0 aperture. There is also an 8-megapixel ultra-wide lens with 123-degree field of view and a 5-megapixel depth sensor. On the front, there is a 16-megapixel camera for selfies and video calls. 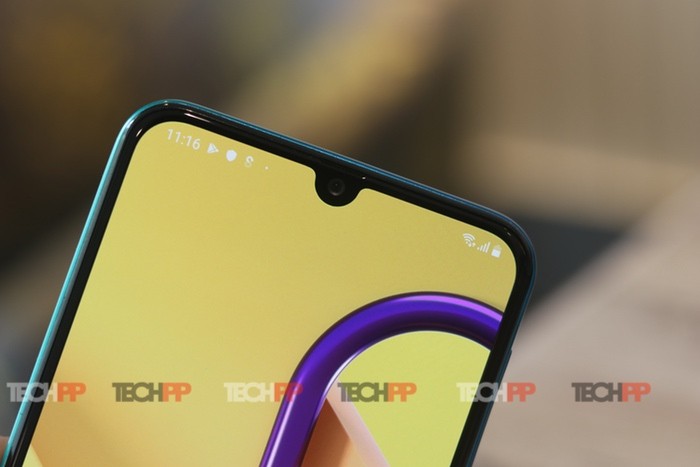 Also adding to the “s” experience is a much larger battery. The Galaxy M30 had come with a massive 5000 mAh battery. The M30s takes it to another level with an even bigger 6,000 mAh battery under the hood. As per Samsung, this should last you for two days on a single charge. We know charging such huge battery can take a while to charge but Samsung has provided fast charge support with the M30s and has bundled a 15W fast charger in the box as well. In spite of housing such a huge battery, the phone is quite slim at 8.9 mm thickness and weighs just 188 grams.

The device is powered by Android 9.0 (Pie) out of the box and comes with a layer of Samsung’s One UI. One UI has been pretty clean and clutter-free but does come with a number of third party apps pre-loaded.

Up against some tough competition 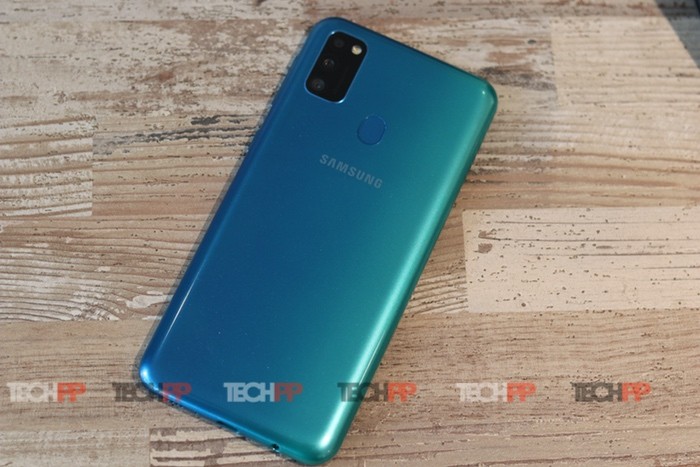 Priced at Rs. 13,999 for the 4 GB/ 64 GB variant and 16,999 for the 6 GB/ 128 GB option, the Samsung Galaxy M30s finds itself going right up against Realme XT, Realme 5 Pro and the Redmi Note 7 Pro, all of which are formidable contenders. A lot of how well the Galaxy M30s performs will depend on that processor, the cameras and how everything communicates within. Wait for our detailed review to find out how it fares.

Was this article helpful?
YesNo
TechPP is supported by our audience. We may earn affiliate commissions from buying links on this site.
Read Next
How to Take a Screenshot on Samsung Galaxy Devices
#First Cut #First Impressions #hands on #samsung #Samsung Galaxy M30s