Samsung announced two new smartphones, the Galaxy A51 and A71, under its A-series lineup, in Vietnam, back in December last year. Today, the company has announced the launch of the Galaxy A51 in India, and it is also expected to bring the A71 in the Indian market soon. Some of the highlights of the A51 include a 6.5-inch Super AMOLED display, quad rear cameras, in-display fingerprint scanner, and a 4000mAh battery. 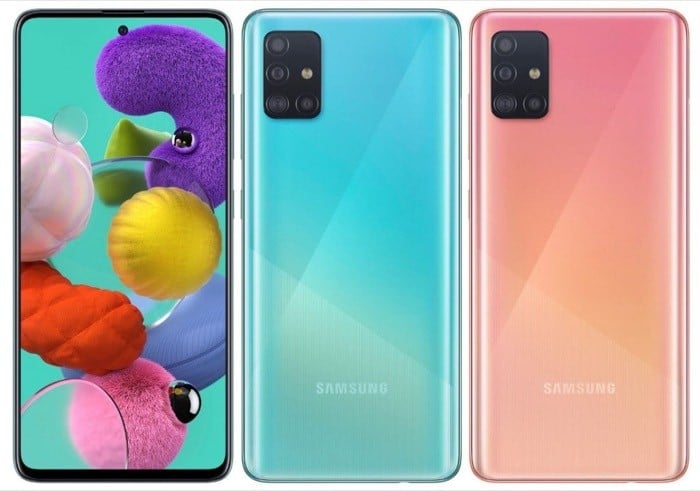 Samsung Galaxy A51: Design and Display

In terms of design, the Galaxy A51 comes with diamond-cut patterns on the rear with different color shades and a rectangular camera module for the cameras. Towards the front, it features a 6.5-inch Infinity-O Super AMOLED display with a 20:9 aspect ratio, a 2340 x 1080 screen resolution, and a hole-punch cutout to house the front-facing camera. The device will come in three color options: Blue, White, and Black Prism Crush.

Under the hood, the Samsung Galaxy A51 comes with an octa-core Exynos 9611 processor with Mali-G72 GPU, coupled with 6GB of RAM and 128GB of internal storage (expandable up to 512GB with microSD card). The device includes a 4000mAh battery with 15W fast charging support to power everything. As for other specifications, there is a 3.5mm audio jack, an in-display fingerprint scanner for authentication, USB Type-C, Dolby Atmos, and support for dual 4G VoLTE, Wi-Fi 802.11 ac, and Bluetooth 5.

On the software front, the phone runs on Android 10 (with Samsung’s OneUI on top) out of the box.

Samsung Galaxy A51: Pricing and Availability

The Samsung Galaxy A51 comes in only one configuration: 6GB + 128GB and is priced at Rs 23,999. It will be made available in three colors: Blue, white, and Black Prism Crush. It will go on sale starting January 31 across various online stores.

Was this article helpful?
YesNo
TechPP is supported by our audience. We may earn affiliate commissions from buying links on this site.
Read Next
Samsung Galaxy Fold 4 Tips and Tricks: Get the Most Out of Your Phone
#samsung #Samsung Galaxy A51