Apple has today announced a revamped version of its entry-level laptop, the MacBook Air. The new model comes with improved internals, the scissor-switch keyboard found on the 16-inch MacBook Pro, and more storage (twice), but at a comparatively lower price point than its predecessors. Let’s dive in and check out the laptop in detail. 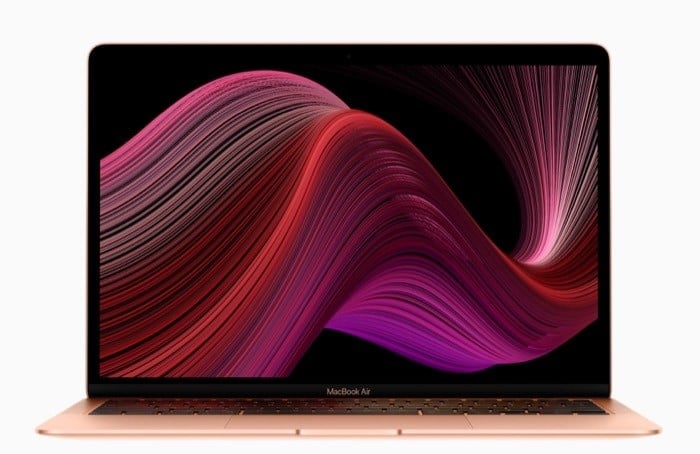 Overall, from the design perspective, the new machine looks pretty similar to the previous model and features the same recycled aluminum body in three different colorways: Gold, Silver, and Space Gray. Upfront, there is the same 13-inch Retina panel, which offers sharp and clear texts with accurate color reproduction, making it undoubtedly one of the best displays on a laptop.

According to Apple, the new MacBook Air will deliver up to two times faster CPU and up to up to 80 percent faster graphics performance — all this thanks to the quad-core (10th-generation Intel Core i7) processors, making their appearance for the first time, with Turbo Boost speeds up to 3.8GHz that makes it two times faster than its predecessor. Add to that, Intel’s Iris Plus Graphics that further aid the machine to stand to its promises of offering up to 80 percent faster graphics performance, and in turn, making playing games and editing video faster.

Besides its powerful processor, the revamped MacBook Air also features the new Magic Keyboard that made its debut with the 16-inch MacBook Pro. Essentially, the keyboard relies on the scissor mechanism from earlier days that has a 1mm of key travel to make the typing experience comfortable and at the same time, more accurate. Among other changes, as already mentioned, the new Air comes with double the storage, and it now starts with 256GB of storage (SSD) and goes all the way up to 2TB.

Talking about privacy and security — something that is at the top of Apple’s priorities — the new MacBook Air comes with the T2 Security Chip, which is Apple’s custom-designed (second-generation) chipset that provides data encryption and ensures that the software has not been tampered. Moreover, it also ensures that the TouchID information on the device is safe. Talking about software, the laptop runs on macOS Catalina, which is the latest offering from the company, out of the box.

TechPP is supported by our audience. We may earn affiliate commissions from buying links on this site.
Read Next
Apple Close to Something Greater than the Mac, iPod or iPhone
#apple #macbook air #MacBook Air 2020