Samsung seems to be on a spree when it comes to smartphone launches this year. A few days back, we saw the company announce the launch of the Galaxy M21, which is its latest offering in the mid-range segment, under the M-series. And today, after being teased for a while, it has now unveiled another smartphone, the Galaxy A31, for the A-series lineup. Let’s have a look at the handset in detail. 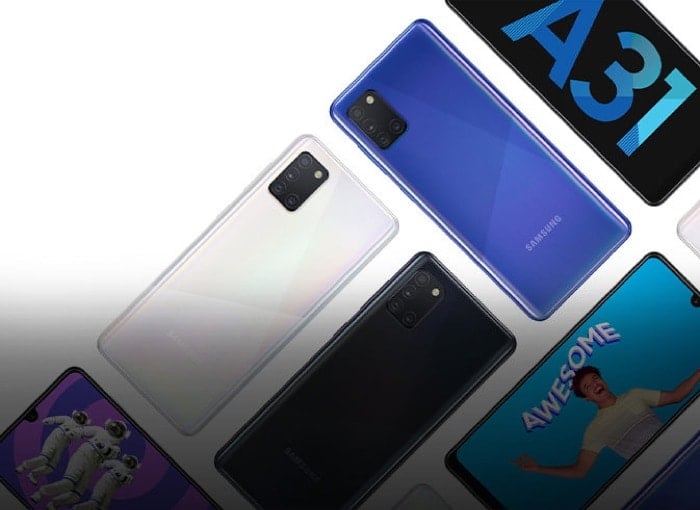 Samsung Galaxy A31: Design and Display

In terms of design, the Galaxy A31 features a glasstic (glass + plastic) design approach with a dual-tone finish on the rear. Towards the front, it has a 6.4-inch Infinity-U Super AMOLED display with a notch at the top for the front-facing camera. The phone comes in four colorways: Prism Crush Black, Prism Crush Blue, Prism Crush Red, and Prism Crush White.

Under the hood, the Samsung Galaxy A31 has a MediaTek Helio P65 running at its core, which is an octa-core processor built on the 12nm manufacturing process. It is coupled with 4GB / 6GB of LPDDR4x RAM and 64GB / 128GB of onboard storage (expandable up to 512GB with a microSD card). The device comes with a massive 5000mAh battery with 15W fast charging support, and it runs on Samsung’s One UI 2.0 based on Android 10 out of the box.

Among other things, the A31 provides support for dual 4G VoLTE, Wi-Fi 802.11 ac, and Bluetooth 5 for connectivity, and it includes an on-screen fingerprint sensor for authentication, along with USB Type-C, a 3.5mm audio jack, and Dolby Atmos.

Samsung Galaxy A31: Pricing and Availability

As of now, the company has not revealed the pricing and availability details for the device. We will update this article as soon as these details are out. So, do check back.

TechPP is supported by our audience. We may earn affiliate commissions from buying links on this site.
Read Next
Samsung Galaxy Fold 4 Tips and Tricks: Get the Most Out of Your Phone
#samsung #Samsung Galaxy A31