Ever since it launched its first phone in 2014, OnePlus has been really disrupting the market and teaching us to Never Settle. Helping the brand in its cause has been some very good communication. Yes, OnePlus did the “normal” videos and ads too, but it ever so often came out with some really outrageous ads to highlight its own smartphones and sometimes just bash the competition. Just like its strategy in the smartphone zone, OnePlus initially followed a very ‘in-your-face’ approach with its ads, not fighting shy of comparisons and sometimes actually going over the top in terms of shocking the viewer. 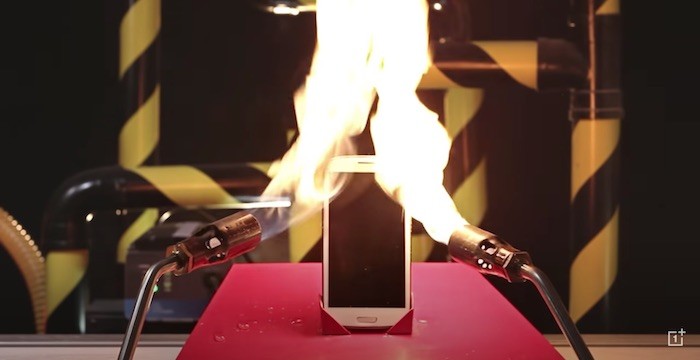 There have been conventional ads, and clever ads too but the ones that we really remember are the wacky, edgy ones. No, they might not have always pleased the purist and some might even have been borderline offensive (hey, some have been removed from the official channels), but they always – and in all ways – grabbed attention. Which suited the brand just fine. Mind you, OnePlus does seem to have got a little more conventional with its advertising of late, but we are confident that the wackiness is still there, waiting under the surface to emerge.

So as the OnePlus 8 arrives, we picked the seven most unsettling, edgy, in-your-face ads the company has released over the years: (warning: not to be seen if you are hypersensitive or like Apple a lot, or Samsung, for that matter)

This ad was all about smashing the past and joining the future. And tied in nicely with a real OnePlus offer in which the brand offered to send a hundred users a OnePlus One for just a Dollar if they sent them a dollar and a video of them smashing their current phone (yes!). The ad featured a machine in which a person puts in one dollar and his old (distinctly Samsung-y) phone. The ad then moves to show what happens inside the machine and how it smashes the old phone and gives the man a brand new OnePlus. While most of the ad focuses on all the torture that the old phone goes through inside the machine, like getting burnt, smashed and exploded, it also tries to establish how the OnePlus phone is your ticket to the future of smartphoning. Well, it could have worked a bit more on highlighting the USPs of the device rather than giving so much screen time to destroying another phone from another brand. But hey, it got attention (just what a new brand needs) and literally hammered a competing device.

This has to be our favorite ad in the list. The ad begins with showing all things that slip and give you trouble like soap, shoes, glasses and – wait for it – your iPhone. OnePlus had launched the OnePlus One and the OnePlus 2 with a textured Sandstone finish back which was anything but slippery and this ad was a clever way of highlighting that. In the ad, OnePlus highlighted accessories to combat slipperiness. It went ahead to show soap, shoes, glasses and iPhone 6’s back cover – all with a sandstone finish. The catch, the cover of the iPhone came with the OnePlus logo. The ad not only highlighted the USP of the two phones but also highlighted a very special feature of the OnePlus range – that textured back. It was subtle and yet in your face, and still ever so funny. A work of art, and one of our favorite ads, because of its sheer cheekiness!

Companies do all kinds of events while launching their smartphones, but OnePlus decided classic unboxing videos are too boring and took matters up a notch. It unboxed the OnePlus 3T up in the air inside a fighter jet. Yes, that is right. In the ad, while the pilot executes all kinds of stunts in the jet, the person sitting in the rear seat unboxes the 3T. The video is definitely full of adrenaline and all sorts of weird shouting, even though it does not say too much about the phone itself. The person unboxing does try to highlight the USP of the phone but because of all the flying in the jet (and his own screaming), that actually gets a little sidelined. But then, it remains an epic unboxing video.

A special Valentine’s Day ad which some might consider ludicrous, Who Do You Love shows different people talking in a very erotic manner in front of the camera about someone (well, actually something). You might think they are talking about their partner or object of lust (oh yes, it is THAT kind of talk) but then the OnePlus 3T comes into the picture. And it is revealed that these people were actually talking about a phone. The OnePlus 3T. What took this ad from being edgy to insane was all the licking and kissing and making out (with the phone!) that started happening once the phone was handed to these people. It was outrageous for many, Some were distressed at the lack of hygiene it projected. But no one ever forgot it. Mission accomplished!

This one seemed like a regular comparison ad but came with a shocking twist. In the Speed Challenge test, the OnePlus 5T competed against the iPhone X, the iPhone 8, the Samsung Galaxy Note 8 and the Samsung Galaxy S8. Users in the ad were asked to perform certain tasks on their phones like turning on the torch, playing music, and taking a picture and whosoever did it first won. The OnePlus 5T came first in all these contests against all these phones. Till this point, this looks like your everyday comparative ad, where the brand is highlighting the USP of its product. And then the “referee” (the person with the OnePlus 5T who challenges others) takes the losing phone from its owner and smashes it on the ground. This obviously upsets the owners (there is some swearing too). But then comes a twist where the referee reveals that he did not actually break their phone but a dummy, and hands them their phone and gives them a brand new OnePlus 5T as well. For a one-minute-40-second long ad, it is laden with twists. And well, the phone breaking did upset a few folks but then again, people watched. And watched!

Our video stabilisation test on the #OnePlus5T. 1 man, 1 dog and a meat suit. https://t.co/wzdWth1MXM pic.twitter.com/lp3kkdqXMQ

If you think it is an absurd title, wait till you see the ad. OnePlus has never been shy of making competitive and comparative ads and this ad falls in the same category. As the title says, it features a man, a dog and (yes!) a meat suit. So how does a phone, or phones, fit into this? In the ad, a man wearing a meat suit holds two phones– a Samsung Galaxy S8 and a OnePlus 5T on a selfie stick. A very hungry German Shepard is then released on the man with the meat suit who is videographing everything as the dog feasts away, ripping away the meat from his suit and keeping him off balance. The results are then shown at the end, the 5T comes out as the clear winner.

While the idea and approach of the ad are very offbeat, what brings it all together is the very edgy and sarcastic voiceover which actually mentions how the man testing the cameras on the two phones is a moron. The concept is basically to show how the phone captures video in a very shaky environment, which honestly could have been done using less scary situations but then that would have been just another ad, right? The sheer moron-ness of the man in the ad and the ad itself, make it memorable! Shockingly so.

The Cactus Test is a part of the same 5T ad campaign as the meat suit one. And just like that one, it also includes a comparison between two smartphones and what some would call moronic behavior. The ad features two men, neither of whom is wearing too much. One of them is using the OnePlus 5T and the other is using the Samsung Galaxy Note 8. They are testing the processing speed of the two phones. How? Well, they are asked to open twenty everyday apps and whoever does this first wins. Sounds simple enough? There’s a twist and a reason for the lack of clothing. While these men are launching apps, bits of thorny cactus are being thrown at their bare bodies. Hence, the cactus in the title. The man with the OnePlus 5T obviously wins this test and gets to leave, while the other is confined to a slightly longer thorny existence. A clever voiceover backs this ad as well. Like most other ads in this list, this one too is pretty edgy and in-your-face. We are not sure who would actually test the performance of their smartphones this way but if you are looking for inspiration, please look away.

Will we see anything remotely as edgy as these for the OnePlus 8 series? Well, OnePlus has been a little more traditional in its approach of late, but hope springs eternal. Imagine an ad with two cats, red cables, dash charge, a dog, three skeletons, some cake, a half-used tube of toothpaste and Robert Downey Jr? Well, OnePlus could make it happen. And make sense of it too (we couldn’t – if they do, we would be glad to claim credit for giving inspiration)!

Was this article helpful?
YesNo
TechPP is supported by our audience. We may earn affiliate commissions from buying links on this site.
Read Next
How to Pixelate or Blur Content on an Image on OnePlus Phones
#oneplus #OnePlus Blog #Tech Ad-ons