Samsung has today introduced two new smartphones in the Indian market, the Galaxy M11 and Galaxy M01. Of the two, the M11 is the successor to the M10, launched last year, whereas, the M01 is more of a new entrant in the budget category. The Galaxy M11 was unveiled in UAE in March earlier this year, and today, it makes its way in India. Let’s dive in to learn more about the two devices. 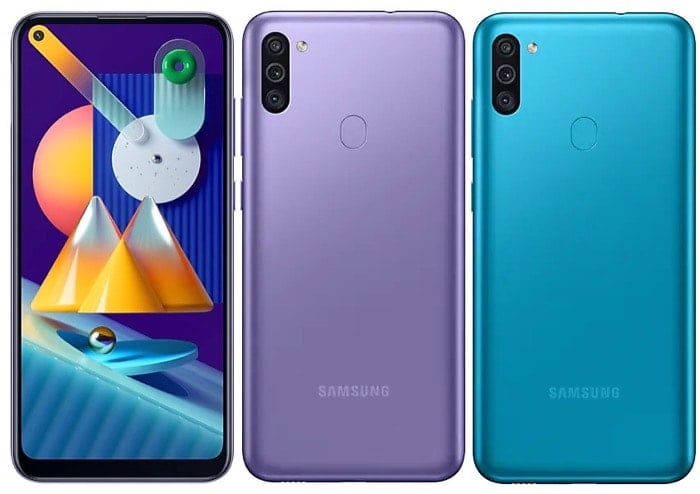 The Galaxy M11 features a 6.4-inch HD+ Infinity-O display that stretches along the edges and has a hole-punch cutout on the top left for the front camera. Towards the back, the phone has a curved design that promises to offer a comfortable grip in hand, and it also includes a fingerprint scanner for authentication. The Galaxy M11 comes in three color options: Black, Metallic Blue, and Violet.

At its core, the Samsung Galaxy M11 runs on a 1.8GHz Snapdragon 450 octa-core chipset, coupled with 3GB / 4GB of RAM and 32GB / 64GB of onboard storage, expandable up to 512GB with a microSD card. To power the internals, the phone includes a 5000mAh battery with 15W charging. It comes with a rear-mounted fingerprint scanner, a USB Type-C port, and a 3.5mm audio jack. For connectivity, the handset offers support for dual 4G VoLTE, Wi-Fi 802.11 b/g/n, and Bluetooth 4.2. It runs on Samsung’s custom OneUI 2.0.

Talking about optics, the Galaxy M11 sports a triple-camera setup on the rear, with an LED flash. The setup includes a 13MP (f/1.8) primary sensor accompanied by a 5MP wide-angle (f/2.2) and a 2MP (f/2.4) depth sensor. On the front, there is an 8MP sensor with f/2.0 aperture, housed within the hole-punch cutout, for selfies.

The Galaxy M01 is the latest entry in the budget segment, and it comes with a 5.7-inch HD+ TFT Infinity-V display with a notch for the front camera. It comes in three colorways: Black, Metallic Blue, and Violet.

Under the hood, the Samsung Galaxy M01 has a Snapdragon 439 chipset running at its core, paired with 3GB of RAM and 32GB of onboard storage, expandable up to 512GB with microSD card. The device comes with a 4000mAh battery and runs on OneUI 2.0. As for other specifications, the handset comes with support for 4G VoLTE, Wi-Fi, Bluetooth, and includes a micro-USB port. It also includes a 3.5mm audio jack.

As for availability, both M11 and M01 will go on sale starting today, June 2 at 3 PM, across Samsung offline stores and e-commerce sites like Amazon and Flipkart.

Was this article helpful?
YesNo
TechPP is supported by our audience. We may earn affiliate commissions from buying links on this site.
Read Next
Samsung Galaxy Fold 4 Tips and Tricks: Get the Most Out of Your Phone
#samsung #Samsung Galaxy M01 #Samsung Galaxy M11