Let us get one thing clear: no one makes big phones – and I mean big in terms of size as well as features – like Samsung does. There were many of us who shook our heads at the sheer size of the first Galaxy Note (waaay back in 2011) and there are still pundits who feel that Samsung’s phones come with a feature overkill. But at the end of the day, the fact is that the Korean brand has a way of putting things together in a manner that sees big become beautiful than makes excess a success. 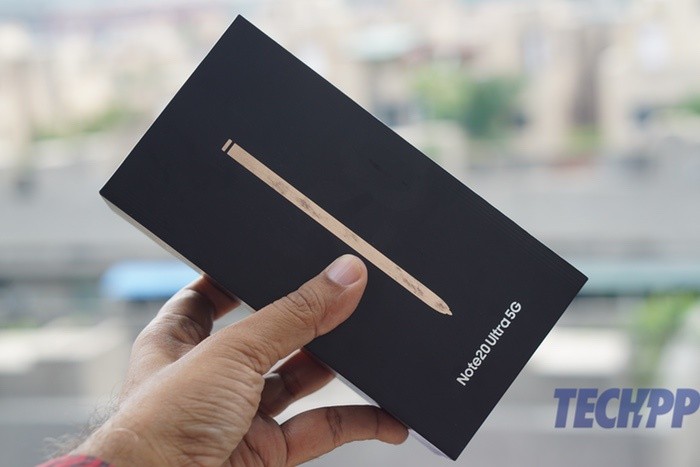 And the Note 20 Ultra reflects this King Kong ability of Samsung.

Let’s get one thing out of the way – the Note 20 Ultra is a big phone. If you thought that the iPhone 11 Pro Max at 158 mm in length was big, the Note 20 Ultra exceeds it comfortably at 164.8 mm. It is not exactly light at 208 grams but the size of the device actually helps here as the weight is distributed over a larger area. So actually even though it is large, the Note 20 Ultra actually feels light. And thanks to some very sleek finishing, it feels premium too. We got the Mystic Bronze version and it actually reminded us a little of Sony’s Xperia experiments with the color a few years ago.

The back, of course, is mainly dominated by a massive four-camera unit that follows Samsung’s recent penchant for placing cameras in a rectangular unit on the top left corner of the back. Three of the four cameras have huge lenses (shades of that Cupertino company) and the whole camera unit itself juts out very significantly indeed and perhaps provides the greatest reason to slap a thick-ish case on that back, even though it does not pick up smudges easily.

In terms of ports and buttons, there have been a few tweaks. The volume rocker and display button go on the right, the left side is totally plain, the top has the SIM card slot, while the base has the USB Type-C port, a speaker grille, and the S Pen’s slot on the left side, rather than the right. The Note 20 Ultra is a big phone and a pretty tough one (Gorilla Glass Victus front and back, and an IP68 rating) as well. There are sleeker and more stylish phones out there, but well, this is the Note and in Ultra mode. It will turn heads because of that Mystic Bronze shade and well, because of its sheer size. Which brings us to perhaps two of its most distinct features. 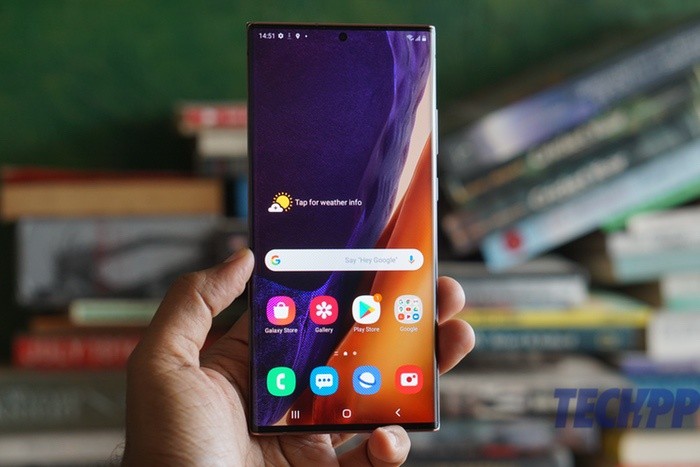 The two specs that make the Note series special are the display and the S Pen. And Samsung has boosted them both significantly. The display is a huge 6.9-inch AMOLED 2X Infinity O display with a quad HD resolution (3088 x 1440), giving it a staggering pixel density of 496 PPI. It also has a 120 Hz refresh rate for good measure. Well, it is a Samsung flagship display, which means that color pop and brightness levels are superb even in bright sunlight (it can go up to 1500 Nits!). The S Pen on the other hand has been given greater sensitivity and is expected to work even better on a 120 Hz refresh rate display. Of course, it still comes with its bag of tricks including handwriting recognition, sketching, screenshot annotating, air actions (it does stuff by just hovering over the display!), and of course, you can use it as a remote as well because it comes with Bluetooth. The S Pen remains Android’s greatest stylus, and the Note 20 Ultra evidently takes it up another level.

And then, of course, there is all the hardware muscle that makes the Note series. It comes with an Exynos 990 processor which might raise the hackles of the Qualcomm loving crowd but turned in quite a decent performance in the S20 series (oh yes it ran PUBG maxed out easily). It comes with 12 GB RAM, 256 GB storage (expandable to 1 TB, if you are ready to sacrifice one of the two SIM card slots), and a big 4500 mAh battery with support for fast charging (you can get up to fifty percent charge in half an hour), as well as Fast Wireless Charging 2.0. 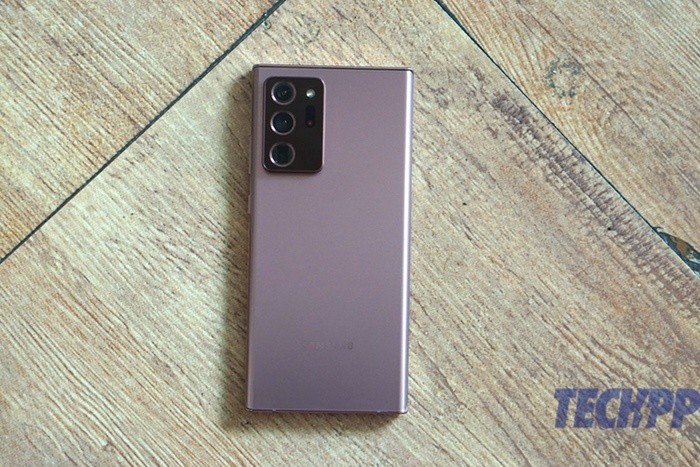 The cameras, of course, are heavy-duty – a 108-megapixel wide camera (with OIS), a 12-megapixel ultra-wide camera, a 12.0-megapixel telephoto and fourth laser autofocus sensor. There is 5X optical zoom, 50X space zoom, and support for 8K video. The selfie work is handled by a 10-megapixel snapper. In best Note and Samsung tradition, there is a sackful of effects and bells and whistles in what remains an at-times-overwhelming camera UI. The display and stylus might define the Note the best, but the cameras come a close third.

All of this with a software feature list that looks like one of that epic Rajasthani thaalis (dishes) in some ethnic Indian restaurants – there is almost too much of too many good things. From the ability to share content almost seamlessly with computers to linking with a TV using DeX, there is a truckload of features here. Yes, it is Samsung’s cleaner OneTouch UI on top of Android 10, but the Note is one of the few Android devices where you do not really worry about the version of Android. It is in a zone of its own. You also get 5G connectivity, and although there is no space for a 3.5 mm audio jack, there are stereo speakers.

Note 20 Ultra: Ultra…expensive (well, it would be!) 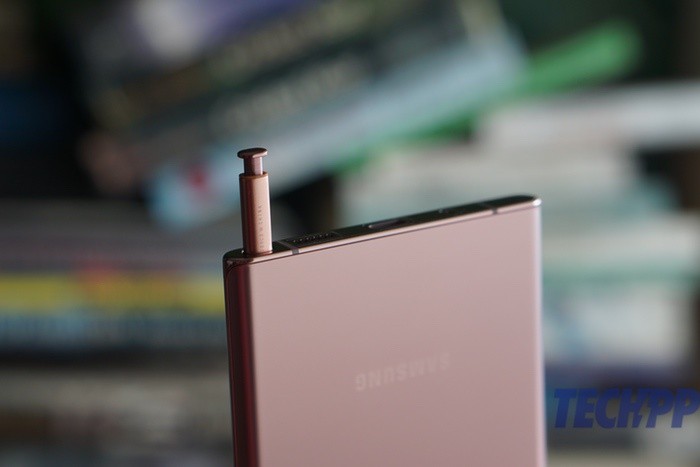 Quite the package. At quite a price when you consider that this comes for Rs 1,04,999. But then the Note series has not been known for ever being super affordable. There will be those who will compare it with the iPhone 11 Pro and 11 Pro Max and even the Galaxy S20 Ultra, but the stark fact is that the Note 20 Ultra, like its predecessors, is in a league of its own. It is the only smartphone with a stylus to have succeeded in the last decade. We can testify that it stretches your palm, and it stretches your wallet…just how much it stretches conventional flagship performance will be known in our detailed review.

Any other phone, it is likely we would have been complaining about its size and price. But then, this is the Note. A big phone with big potential and a big price. Needless to say, we say have great expectations.

After all, no one makes big phones like Samsung does…

Was this article helpful?
YesNo
TechPP is supported by our audience. We may earn affiliate commissions from buying links on this site.
Read Next
Samsung Galaxy Unpacked 2023: Galaxy S23 Ultra with 200MP, Galaxy Book 3 with...
#First Cut #First Impressions #hands on #samsung #samsung galaxy note 20 ultra