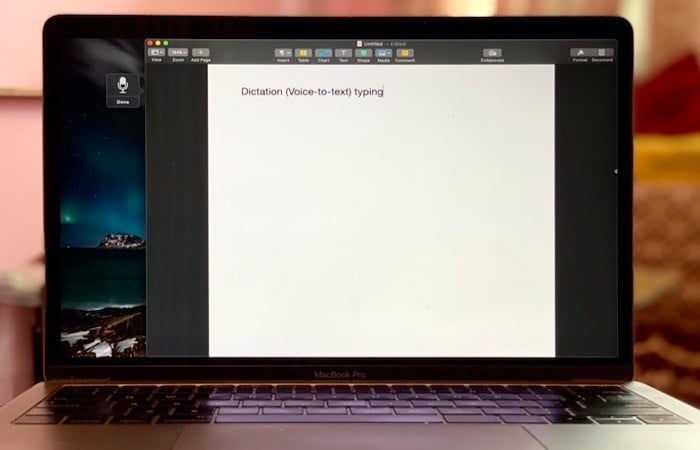 If you have been a Mac user for some time, you would be aware (or might have stumbled upon) the Dictation feature. Dictation, again, is an Accessibility feature on Mac. It allows you to speak text (instead of typing) and leverages the power of voice-to-text transcription to get the output in the form of text. Thus, allowing you to type-in text, without having to, well, actually type text. Since the feature can be used by anyone, for any of their use-cases, here’s a guide, with everything about the feature, including the steps on how to use Dictation (voice-to-text typing) on Mac.

What is Dictation and how does it work?

As already mentioned, Dictation is an Accessibility feature on Mac that allows you to speak text and get an equivalent output for the same in the form of text across any input field. You can use it anywhere on your Mac to enter your input using voice. Most importantly, it is not to be confused with Voice Control, which is another Accessibility feature, which allows you to control your Mac using commands.

When you initiate Dictation and speak text, the same is processed by Apple and sent to their servers, where it is analyzed using language data and converted into text in real-time.

How to enable and set up Dictation?

Before you can use Dictation to enter text using voice, the first thing you need to do is enable Dictation from the Settings. Here’s how –

1. Head over to the System Preferences, and select Keyboard. 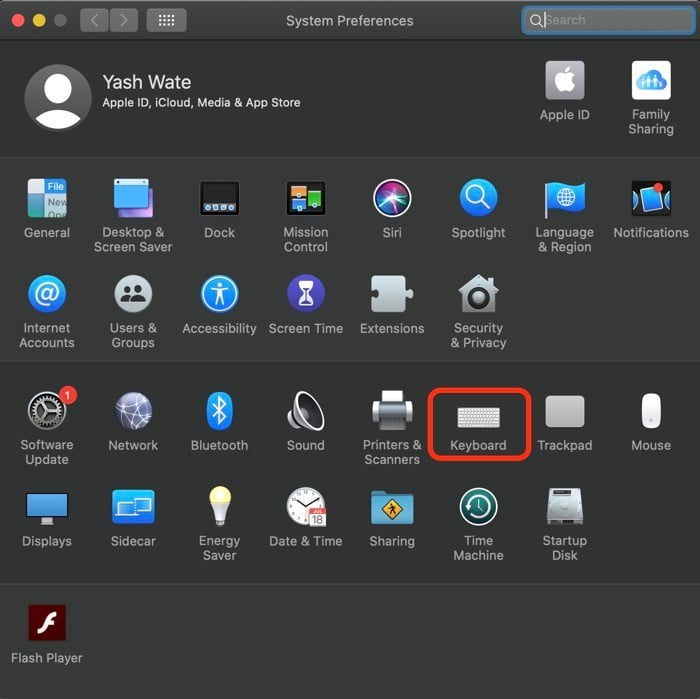 2. In the Keyboard settings tab, tap on Dictation and select the On radio button next to Dictation. 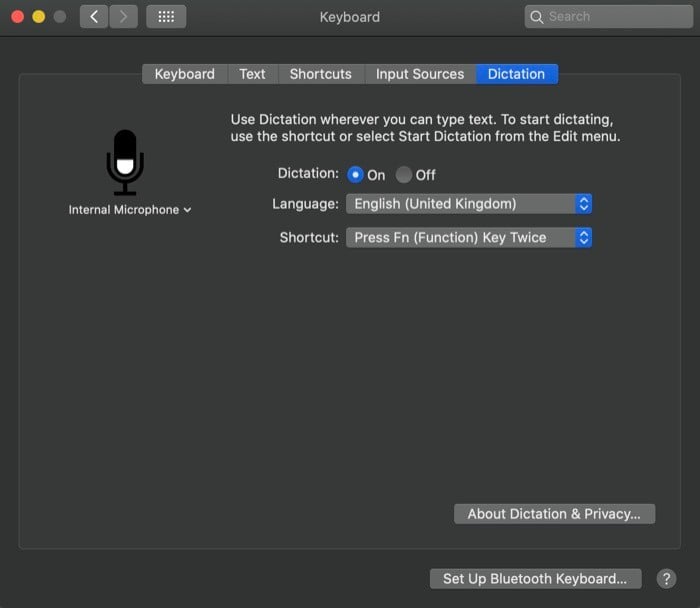 Once enabled, you can further change related settings for the same, like the input language, shortcut to initiate Dictation, and the input microphone.

1. Change input language – hit the dropdown button next to Language to choose your preferred input language. In case you do not see your language in the list, tap the Add Language button to search and add the language. 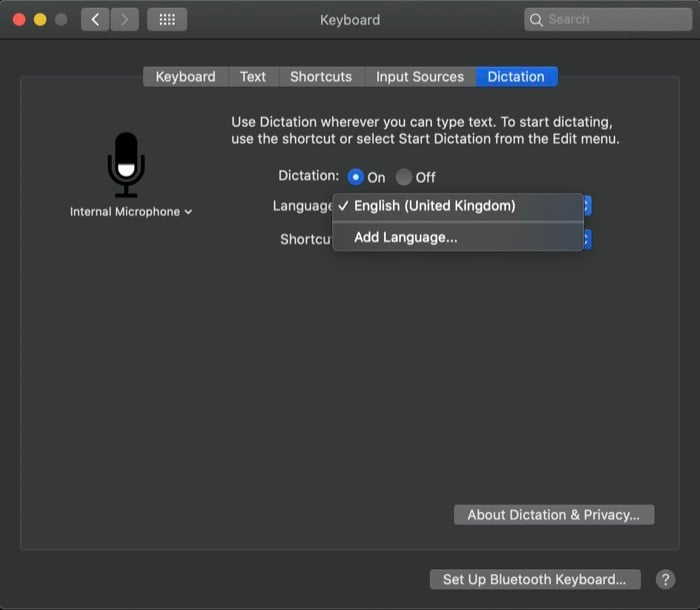 2. Set shortcut to trigger Dictation – to set the trigger shortcut to initiate Dictate, tap the dropdown button next to Shortcut and select a trigger option from the list. Alternatively, you can also set a custom key as the trigger for Dictation. 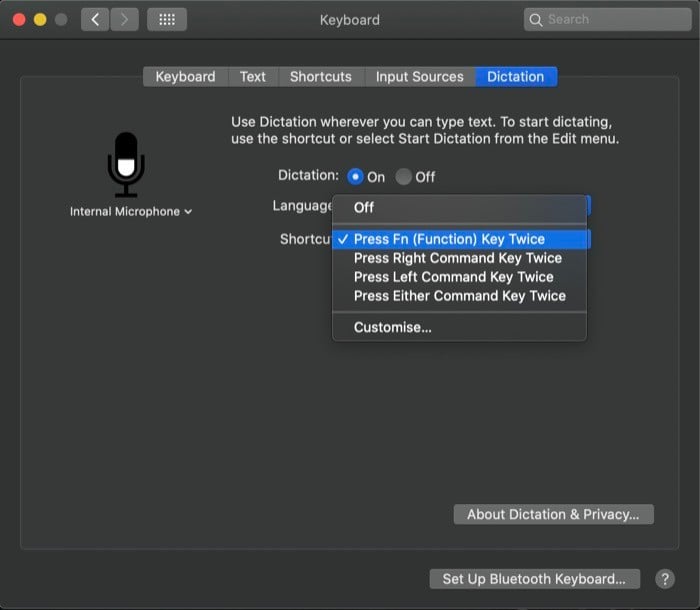 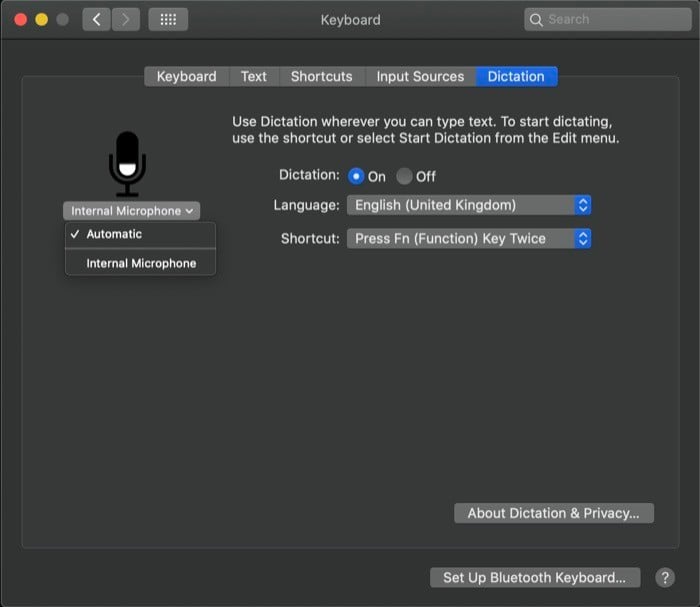 How to use Dictate to input text?

Once you have set the shortcut to trigger Dictation, in the previous point, you are ready to use the feature to dictate text.

1. Open the app/website/service where you want to enter text and place the cursor in the input field.

2. Double-tap the trigger key you set for Dictation, and in the two prompts that appear, hit Ok and Enable Dictation, respectively. [Note – you are only required to perform this step when you are using the feature for the first time].

3. Once you tap the trigger shortcut, you should see a microphone icon, indicating that your Mac is ready to accept dictation. Start dictating your text now. Apple recommends no longer than 40-second dictations for best results. 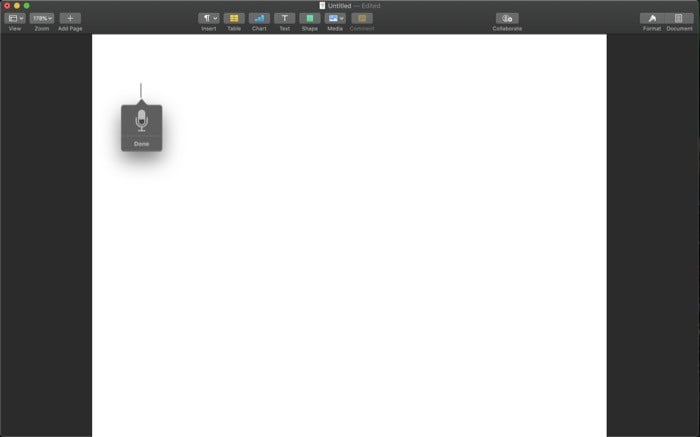 4. When you are done dictating your text, tap the Done button, or hit the return key to stop Dictation. 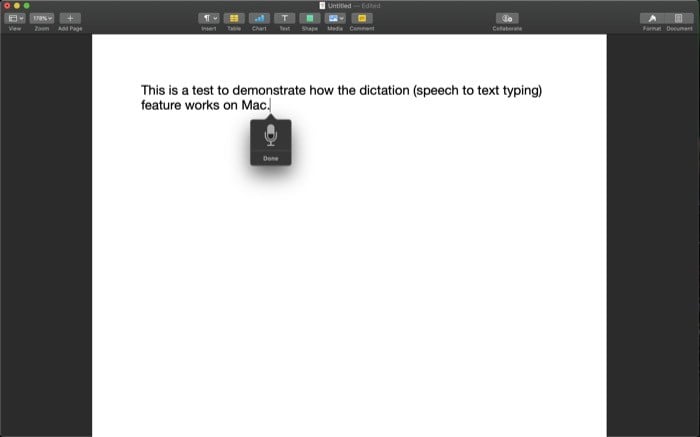 Since a lot of the text we type involves the use of various punctuations make the text easier to comprehend and better convey the message, Apple also allows you to input punctuation marks using voice with Dictation. For instance, if you need to enter a comma (,), you can simply speak ‘comma’ in your dictation to include the same in your writing. Similarly, there are a bunch of other punctuation marks that you can use with Dictation, the commands for which you can learn here.

Now that you have discovered Dictation and how to use it to input text without having to actually type it, on your Mac, you can use the same to input text under different circumstances — like when your keyboard is broken, or you do not feel like typing. Not to mention, it can also be of help to those having disabilities, as they can now input text efficiently without having to be completely reliant on someone’s assistance.

Was this article helpful?
YesNo
TechPP is supported by our audience. We may earn affiliate commissions from buying links on this site.
Read Next
How to Split PDF Online Without Downloading Any App
#apple #dictation #how to guide #MAC #voice-to-text typing