Android tablets are a thing. Of the past. As per most people. And that belief is understandable given the extent to which the iPad has dominated the tablet segment. But even while many manufacturers have given up the Android tablet ghost, Samsung to its immense credit has kept trying to bring Android tablets up to speed with the iPad phenomenon. And just as the iPad is beginning to show signs of notebook-ishness with its flagship Pro series, so too has the Galaxy Tab series, with its own flagship, the Tab S7+. 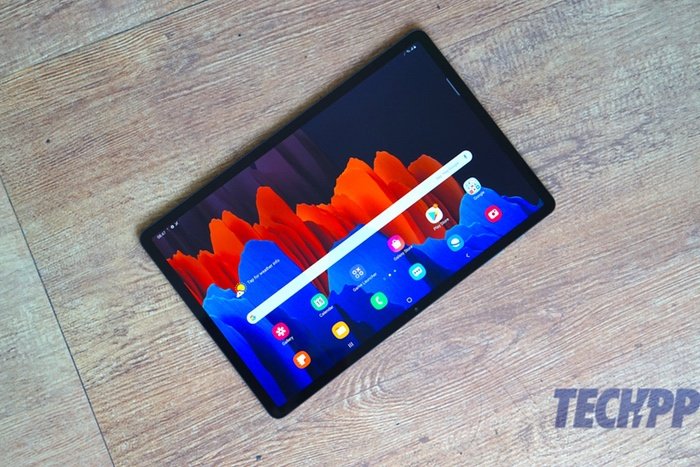 Let us get one thing out of the way – the Tab S7+ is an out and out premium device. Its price starts at a very princely Rs 79,999. And well, the design lives up to the price tag, in terms of material used. The Tab S7+ has a metallic build and at just 575 grams, it is very very light, lighter than the iPad Pro. And at 5.7 mm, it makes thin phones look, well, thick. The material quality seems very good but its lack of weight at times made us terrified of dropping it. We got the Mystic Black option and it looked smart enough, although the camera unit (thank God it is not a rectangular one as one the phones – it is a dual-camera set-up, perhaps that’s why) does protrude a bit and picks up a little dust. There’s also a magnetic panel on the back, right next to the camera unit for placing the stylus (it comes in the box, hooray).

Some might think that the Snapdragon 865+ chip is the most remarkable thing about the Tab S7+, but we disagree – the most notable thing about the device, however, is the 12.4 inch Super AMOLED 2800 x 1752 display, with 120 Hz refresh rate. It is rare to see Super AMOLED displays of this size, and needless to say, most people are going to be staring at it. With good reason. This seems a typically premium Samsung display, colorful and full of light. 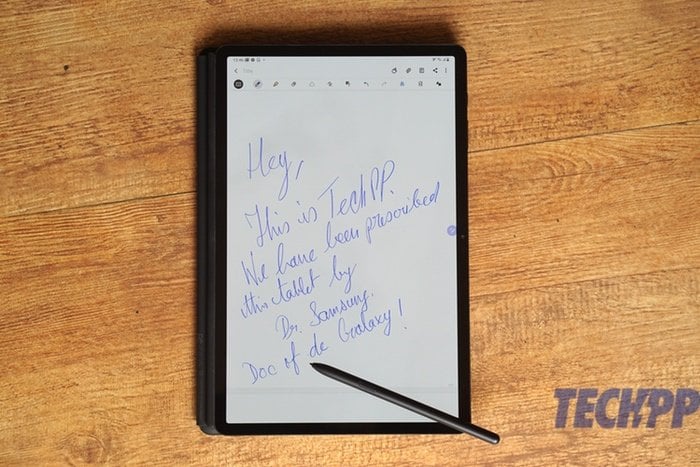 Interestingly, Samsung has persisted with its slightly “longer” form factor, which makes it appear almost as if the tablet has been designed to be used more in landscape than in portrait mode (even the branding on the back is in landscape), unlike the more “square-ish” iPad. Which makes the decision to place the in-display fingerprint scanner on the lower part of the display (in portrait mode) a little odd. Somewhere in the middle of the two sides perhaps would have been better? But then these are early days – you do get face unlock but it does not have the same level of security that the fingerprint scanner has.

Of course, there is 6 GB RAM and 128 GB storage that can be taken to 1 TB with a memory card. There is 4G/LTE on board as well, and so are GPS, Wi-Fi, and Bluetooth. And there is a 10,090 mAh battery as well, with the promise to see you through a reasonably rigorous workday. However, the real aces up the Tab’s sleeve, apart from THAT display, could well be its stylus and well, the additional keyboard accessory.

Handwriting or writing type: matters of pen and keyboard 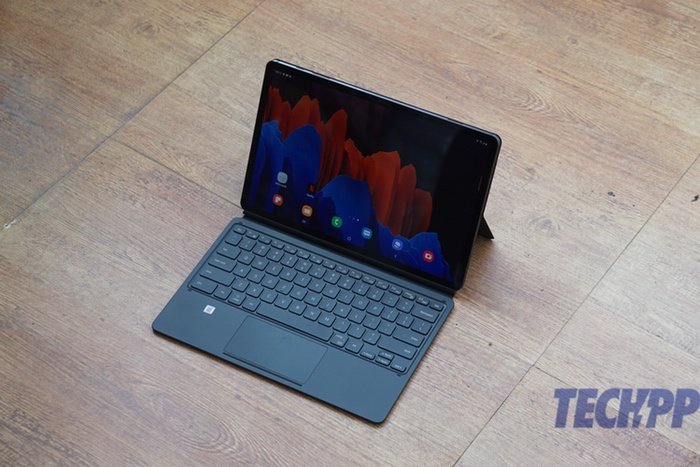 The stylus, the iconic S Pen, comes with the tablet. And while it does not have a rear tip that goes clickety-click (as in the Note), it is bigger and has a more pen-like feel to it. It comes with gesture support and can be used as a remote as well, and of course, this being Samsung, you can be sure there is a truckload of features packed into it, ranging from scribbling to sketching to handwriting recognition and much more. Yes, we do not quite like the “stick it on the back” option, as we kind of forgot it was on the back and put our tablet down only to see it wobble oddly, but we guess one can get used to that. Incidentally, it charges wirelessly off that panel on the back. THAT? Very cool.

Then there is the keyboard. No, it does not come cheap at Rs 17,999. But it does serve up a very spacious keyboard and a trackpad besides. Mind you, we think the magnets connecting it to the tablet could have been stronger – it just came apart too easily and sometimes did not even seem to incline properly with the display. The back has a (slightly stiff) kickstand that allows you to adjust your viewing angle and also has a very nice flap that flips open to let you take the S Pen out. That said, the S Pen’s protruding enclosure does make the back slightly unbalanced. Again a matter of just getting used to it, we suspect.

S Pen: From Note-worthy to Note-able to Side Note?
Read More

In an interesting twist to the normal keyboard cover plot, the keyboard cover for the S7+ comes in two separate pieces. And each attaches separately – the keyboard bit to the display using magnetic connectors, the back cover to the back using a magnetic panel. It actually has functional benefits – you can totally remove the keyboard section and still have the back covered (not an option with Apple’s iPad keyboards), but on the flip side, removing the back cover can be a bit of a pain – we often kept pulling out the kickstand. Mind you, WHY would anyone want to keep pulling off the back cover?!

Take this tablet…and notebooks will be worried? 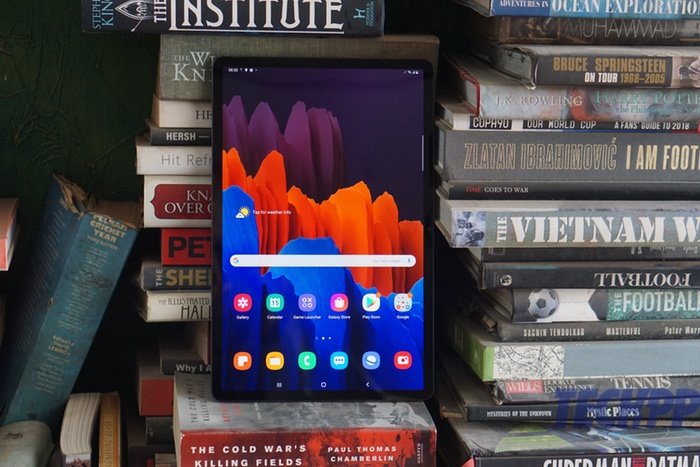 With the keyboard cover, the Galaxy S7+ gets not just into the iPad Pro range, but also, like its Apple rival, lays siege to the notebooks. And not just entry-level ones, but high-end customers. With a keyboard, the Galaxy Tab S7+ will be going up against the likes of the Surface range, the MacBook Air, and pretty much the cream of the laptop army. Of course, it brings its own weapons to the battle – the display, the S Pen, and if you choose to invest in it, the keyboard cover. Just how well it all comes together will depend on a crucial component – software, never an Android strength when it comes to tablet-land. But as Samsung has shown us with the legendary Note series, it has a few software tricks up its sleeve. How much closer that brings the Tab S7+ to being THE one device you need for everything from viewing to typing to sketching will be revealed in our detailed review.

Was this article helpful?
YesNo
TechPP is supported by our audience. We may earn affiliate commissions from buying links on this site.
Read Next
Samsung Galaxy Fold 4 Tips and Tricks: Get the Most Out of Your Phone
#android tablet #apple ipad #First Cut #First Impressions #hands on #samsung #samsung galaxy tab s7