To Never Settle or to be Mpowered?

Looking for a smartphone for around Rs 25,000? Well, two of the most recent options that will spring to most people’s minds are the Samsung Galaxy M51 and the OnePlus Nord. Both start at around the same price (Rs 24,999) but that is about where the similarity ends. These are two very different devices, aimed at very different users. So which one works for you? Let’s get into the Q&As and find out: 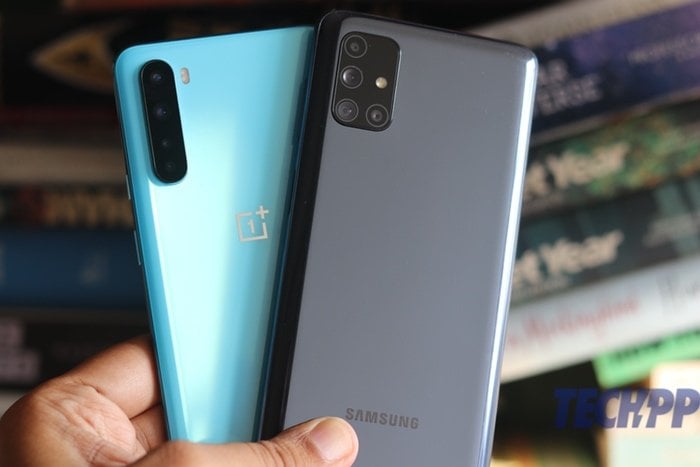 I want a phone to flaunt (so what if it’s a pandemic, aesthetics matter). Which one should I go for?

No brainer. The M51 is not a bad looking phone by any means, but it does look a little predictable. The Nord is lighter and more compact and it does some rather unusual shades – its Blue Marble and Grey Onyx (especially the Blue Marble) make the M51’s Celestial Blue and Celestial Black look rather plain. What’s more, the Nord has glass on front and back, while the M51 has a carbonate one. Not a dealbreaker for us, but it does put off some folk. This one is for the Nord.

I am going to be watching a lot of films and all. Which has got the better display?

This is interesting and is actually a tale of two AMOLEDs. Super AMOLED Plus on the M51 and fluid AMOLED on the Nord. They are both very good displays for the price they come for, and well on the surface, the difference does not seem that much. Yes, the Nord’s display seems a little brighter, but then the M51 gives you much more real estate (6.7 inches) as compared to the 6.44-inch display of the Nord. Those looking for a big display would prefer the M51, but the 90 Hz’s refresh rate wins it this one, as it does make the display a little more future proof, although the difference in the two is not really noticeable until you scroll a fair bit.

Got the films, got the games. We need some chips. Which one has the better processor? 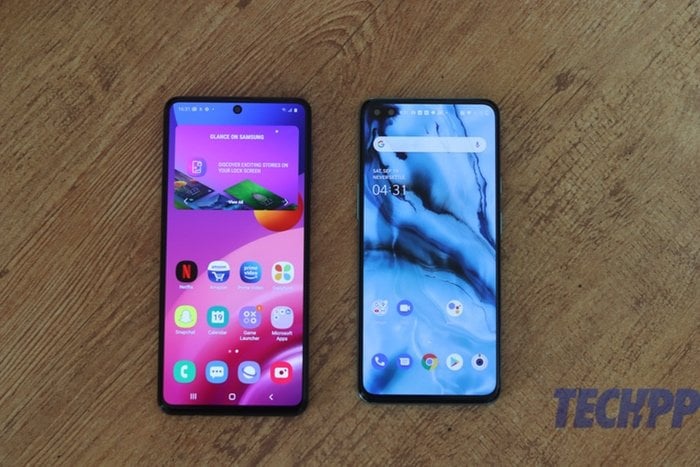 The Galaxy M51 is powered by a Qualcomm Snapdragon 730G chip, which might seem old to some, but is a very good processor, as anyone who has used the Poco X2 will testify. However, it is not quite in the class of the Snapdragon 765 that runs the OnePlus Nord. Yes, the M51 will handle most tasks very well, but the Nord has a clear edge the moment you up the multi-tasking or gaming ante.

3-0 to the Nord. This is becoming a massacre.

Memories do matter. Which one of these has got the better RAM and storage configurations?

Lights…action, oh wait, did we forget something? Who has got the better cameras? 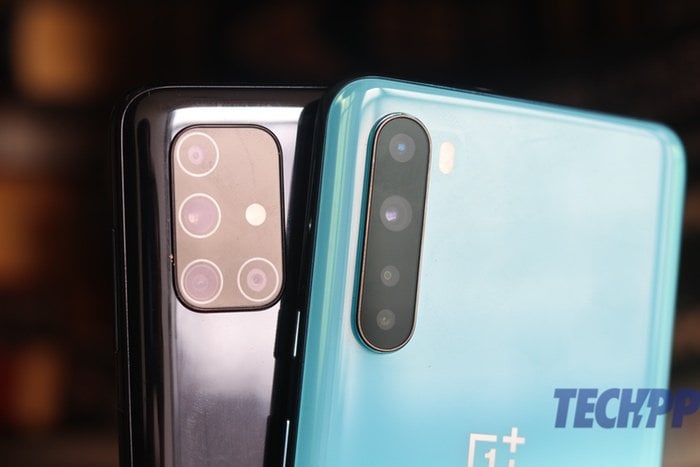 We are looking at two quad-camera setups, both similar in that they each have a main sensor, an ultrawide sensor, and a depth and a macro sensor. While the Nord comes with a 48+8+5+2 megapixel set up, the M51 packs in more with a 64+12+5+5 megapixel camera arrangement. The M51’s main sensor is also a Sony IMX682 which is a newer sensor as compared to the Sony IMX586 on the Nord. Both phones match each other broadly, although we felt the M51 grabbed more details and surprisingly, the Nord’s snaps had a slightly more saturated feel to them. Those who like more realistic snaps will like the M51, and we also feel that the M51’s supporting camera cast is significantly superior to the Nord.

The Nord pulls things back with its OIS, which makes for better low light and night snaps, and also a more stable video. All of which makes it rather close. We are handing this to the M51 mainly because of its greater detail ability and superior secondary cameras (as well as some very good camera UI software – the Nord is a little plain there), but if videos and low light are important, the Nord should be your option.

Sometimes others do not matter. Who takes better selfies? 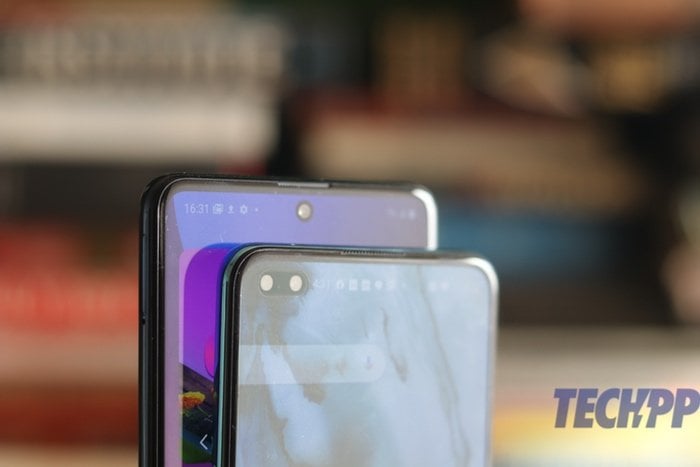 The 32-megapixel selfie snapper on the M51 is a very good vanity photographer. But it does not match up to the dual camera (32 + 8) selfie snappers on the Nord, which give you far more variety and literally more space.

It’s not just about sight, who has got the better sound out there?

Close. Very close. We felt the Galaxy M51 has a slightly louder sound, but the Nord scores on better quality. However, the M51 aces the Nord by bringing a 3.5 mm audio jack to the battle.

Stamina, stamina! Who has got the better battery? 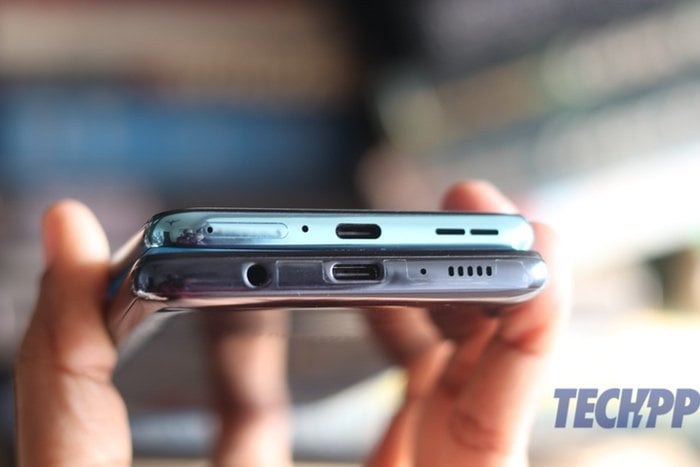 Let’s not even go there. This is the Galaxy M51 by a mile. Yes, the Nord is no pushover with a large 4115 mAh battery and Warp Charge 30T and a 30W charger. But then, the M51 comes in with a 7000 mAh battery and a 25W charger. We are looking at a phone that will last a day and a little more, and one that can last close to two days and a half.

Samsung Galaxy M51 vs OnePlus Nord: Is 5G an issue?

Well, it exists, but not in most markets. That said, it is a plus point. And the Nord has support for it while the M51 does not. No, it will not be a huge factor right now and perhaps not for another year or so, but it is an edge the Nord has. It simply is a more futuristic device (check the 90 Hz refresh rate display)

Ware were we? Oh yes, which has better software?

It really depends on how you liked your Android. If you like it bare with not too many additions, then the Oxygen UI on top of Android 10 on the Nord will be just dandy for you. But if you are looking for more features and add on applications, then the OneUI on the M51 will be more tempting. It is really a matter of preference. We tend to favor the richer experience on the M51 (especially in the camera interface), but then OnePlus’ formidable software update record makes the Nord a very good option as well. We are calling this one a tie – our hearts say M51, our heads say Nord.

Samsung Galaxy M51 vs OnePlus Nord: Anything else worth a mention? 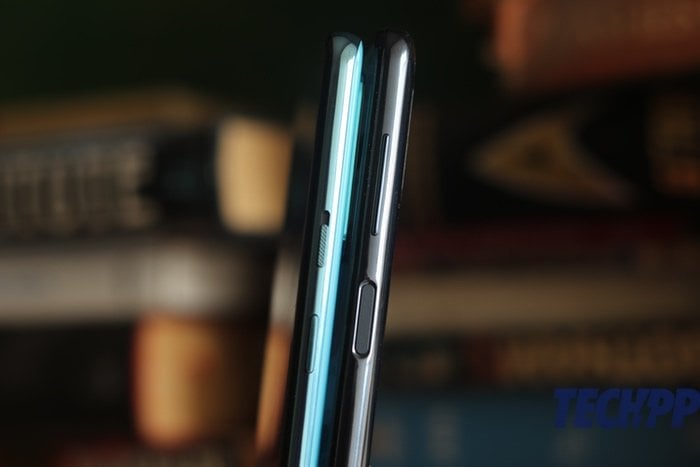 Well, the OnePlus Nord comes with that very handy alert slider on the right that lets you switch between silent, vibrate, and ring modes by just sliding the button. A very handy feature really which we wish other phones would get too. But then the M51 has a fingerprint scanner on its side which works a whole lot faster than the seemingly more snazzy but sluggish in-display fingerprint scanner. Call quality seems about the same on both. The M51 gives a bigger display so watching content might seem better on it, but then its volume rocker is almost near the top of the phone – the Nord is much more compact to handle in comparison!

Do we need to change the score? Naaah.

Let’s not pass the buck – which one has lower price tags?

Samsung Galaxy M51 vs OnePlus Nord: Pick one for me, please? 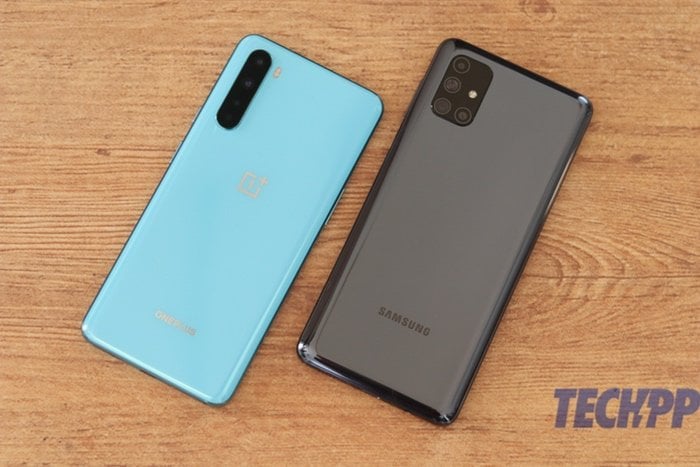 As always it boils down to those three magic words: WHAT YOU NEED. These are two very good devices, but they represent two different parts of the smartphone spectrum in the upper mid-segment. The Galaxy M51 is perhaps the better choice for those who are looking for a more conventional smartphone experience, with its blend of steady cameras, big display, and fantastic battery.

On the other hand, those wanting something more “edgy” and futuristic would prefer the Nord, with its more eye-catching design, higher refresh rate display, 5G, and minimalistic but rapidly updated software. It is a clash between a settled phone and a Never Settler. There are no winners here. Just two terrific options. What you consider important will decide the one – which may even be a OnePlus – for you!