While buying a new smartphone, the performance it provides is an important factor for a lot of consumers. Especially, in a spec-driven market like India, the SoC plays a major role in influencing one’s decision of buying a certain phone. With the mid-range smartphone segment being competitive as ever, brands are fighting to provide the best possible chipsets for the price and the Snapdragon 730G was a favorite in this segment. This is due to the fact that apart from being a solid performer, the suffix “G” emphasizes the gaming capabilities which is a huge attraction to the youth given the rise of games like PUBG in the country. 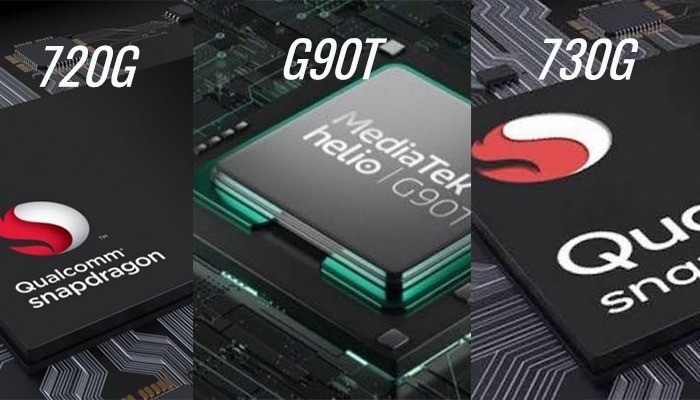 The MediaTek Helio G90T on the Redmi Note 8 Pro (review) and now on the Realme 6 (review) is also popular for the same reason – supreme gaming performance on a budget. Recently, Qualcomm announced the Snapdragon 720G specifically catered towards the Indian market and while we initially considered this chip to slot right between the Snapdragon 730G and Snapdragon 712, going by the moniker, it turns out, the Snapdragon 720G actually performs even better than the 730G in some scenarios. The Snapdragon 730G is relatively old now and the 720G also has a slightly faster CPU which gives us this surprising result. Let’s delve in a little deeper and see how we arrived at this conclusion.

Let’s first address the slightly more controversial comparison between Helio G90T vs Snapdragon 720G. The Redmi Note 8 Pro from just a few months ago came with the Helio G90T chipset which was indeed mighty powerful. The biggest highlight of the SoC was the fact that it could run PUBG on the smoothest graphics setting resulting in a 60fps frame rate. The newly launched Realme 6 also has the same capability.

However, the elder sibling, the Realme 6 Pro has the new Snapdragon 720G chipset which CANNOT play PUBG on the highest setting. The frame rate is capped at 40fps which naturally makes the general consumer believe that the G90T is more powerful than the 720G. This, however, is true only to a small extent.

When we benchmarked the two phones on Geekbench 5 as well as AnTuTu, the scores are clearly higher on the Snapdragon 720G, albeit not by a very high margin. Also, if you observe the split-up on AnTuTu, you can see that the G90T actually scores higher in terms of the GPU score whereas the 720G is ahead in terms of CPU points. This explains the fact that the G90T touting Redmi Note 8 Pro and Realme 6 can play PUBG on the highest setting whereas the 720G, or for that matter, even the 730G cannot.

What does this imply? In real-world usage, the Snapdragon 720G will perform slightly better than the G90T, although the difference isn’t enough to see an actual variation in terms of speed. Also, the Snapdragon 720G is more power efficient when compared to the Helio G90T which means you’ll get better battery life along with better thermals.

As much as the ‘+10’ in the nomenclature may suggest, the Snapdragon 720G achieves equivalent, or even better performance in some cases when compared to the Snapdragon 730G which was as surprising to us as it is to you. When the Snapdragon 720G was announced, we did a spec-based comparison where we concluded that the SD 720G would be providing equivalent performance to the SD 730G at a lower price. And in that same post, we highlighted the fact that the 720G has a slightly higher clock speed when compared to the 730G. And that certainly shows in the benchmark results as well.

When we ran Geekbench 5 and AnTuTu on the Poco X2 which has the Snapdragon 730G and on the Realme 6 Pro which comes with the Snapdragon 720G, we found that the 720G scored slightly higher in terms of the single-core performance which makes sense given the higher clock speed. In multi-core performance, both chipsets produced an almost-equivalent score. Even on AnTuTu, the Realme 6 Pro scored higher in terms of CPU performance and contrary to our belief that the 730G would perform better in terms of GPU as it is overclocked by 15%, both chipsets have a similar score.

This should give you a better general overview of both chipsets rather than comparing them just based on specifications. Barring a few improvements in AI and connectivity and the inclusion of NavIC, both the Snapdragon 720G and Snapdragon 730G are identical and the fact that Snapdragon 720G is newer gives it an upper hand in terms of newer updates to the components and chips onboard. In day-to-day scenarios, you surely won’t be able to tell both chipsets apart be it with regular apps or gaming.

We hope we were able to clear the air around the confusion regarding the chipsets as to which one is more powerful and why brands are opting for these particular chipsets in the mid-range segment. With the new Redmi Note Pro and the rumored Max variant right around the corner, let’s see what chipsets Xiaomi opts for on those phones and how they compare to phones from Realme and other brands.

Update: Sharun from 24x7techie YouTube channel ran these tests multiple times and has confirmed our analysis. Go watch it.

Was this article helpful?
YesNo
TechPP is supported by our audience. We may earn affiliate commissions from buying links on this site.
Read Next
Google Pixel 6a Vs Nothing Phone (1): How Do They Compare?
#AnTuTu Benchmarks #comparison #Helio G90T #Honor MediaPad T3 #mediatek #Snapdragon 720G #Snapdragon 730G