This is the season of having lower-priced flagship variants. Apple, OnePlus, and Samsung have all shown off slightly lighter (in terms of specs and price both) versions of their flagships. And it is now Xiaomi’s turn to join the party with the T variants (such Never Settling feels) of its flagship, the Mi 10, with the Mi 10T and the Mi 10T Pro. Both come at lower price points than the Mi 10, and like that worthy try to make space for Mi in the slightly more premium segment of the Indian smartphone market. That is quite a task given the competition they face. Here’s our take on the better specced of the duo, the Mi 10T Pro. 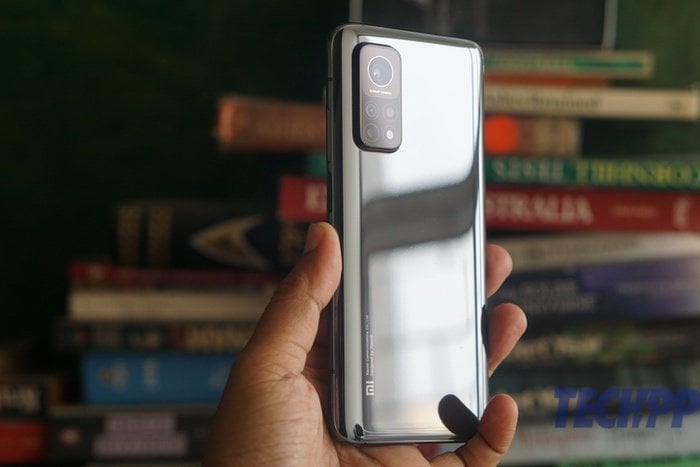 Getting those Mi 10 feels in looks…NOT

In terms of design language, the Mi 10T Pro is very different from the Mi 10. Yes, you get the glass front and back with a metal frame and the premium feels, but there the similarity ends. Whereas the Mi 10 had a curved display, the Mi10T Pro has a flat one. It also has a fingerprint sensor on the side rather than under the display as in the Mi 10. But the biggest difference is on the back, where the Mi 10T Pro has opted for a very Samsung-like rectangular camera arrangement unlike the capsule-like one on the Mi 10. It is a significant camera bump, reminiscent of the Galaxy S20 Ultra, which can be a good or bad thing depending on how much you liked that phone (for the record, we did).

The Mi 10T Pro is also a slightly bigger phone than the Mi 10. At 165.1 mm, it is longer than 162.5 mm long Mi 10, at 9.3 mm slightly thicker too (the Mi 10 was 9 mm), and at about 218 grams, a bit heavier (210 grams) as well. It is definitely a very handsome phone, although that shiny back will pick up smudges and dust. The phone is available in Cosmic Black and Lunar Silver variants, and we got the black version which looked very classy and stylish, in spite of picking smudges at the rate of knots (we hope there will be a case in the box). Those who like curved and slimmer phones will not like this one that much. It is a bit like the Pro and non-Pro versions of its never settling rival. We think it looks very good indeed, if a little on the big side, which is not necessarily a bad thing.

Getting those Mi10 feels in specs…LOTS 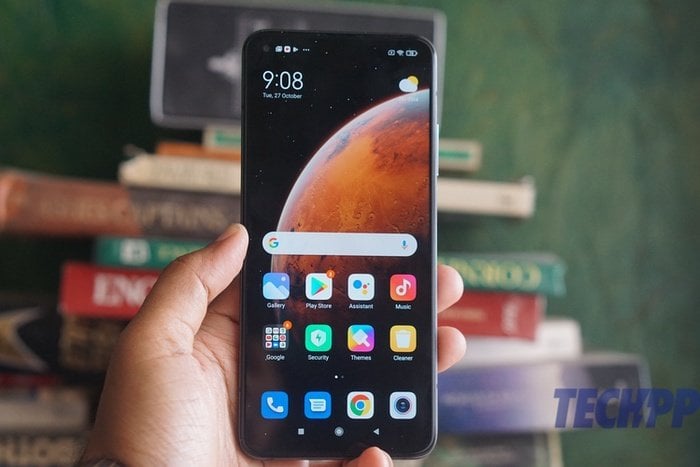 But if the Mi 10T Pro follows a different design language from the Mi 10, it mirrors its spec sheet to a large extent. It has a similar 6.67-inch full HD+ display but unlike the Mi 10, this one is an LCD and comes with a 144 Hz refresh rate, making it one of the few with that spec in India. Xiaomi has said that it comes with Intelligent AdaptiveSync which it says allows the phone to switch between seven refresh rate levels depending on the use case scenario. We do not know how THAT will play out but the display does look very bright and colorful.

The phone also sports two of the spec highlights of the Mi 10 – the Qualcomm Snapdragon 865 processor and a 108-megapixel main sensor with OIS and support for 8K video (the Lord alone knows where you would play it, but that is another story). There is also RAM and storage aplenty – 8 GB / 128 GB (non-expandable) is the variant we received and it is LPDDR5 RAM and UFS 3.1 storage. Whatever the 10T Pro will lack, it is unlikely to be speed. 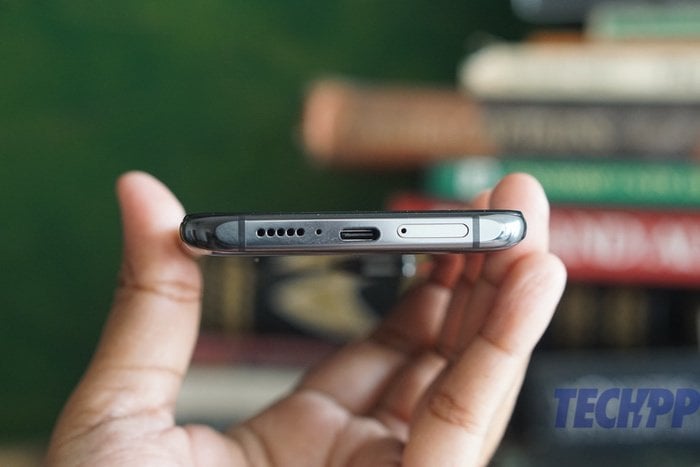 It does lack one of the cameras that the Mi 10 had though. Unlike the Mi 10, the Mi 10T Pro has three rather than four cameras at the back – a 108-megapixel main sensor, a 13 megapixel ultrawide, and a 5-megapixel macro sensor. Mind you, the back shows four camera-like components, one of which exists (we assume) mainly for aesthetic reasons. A little odd in design terms but if the camera performance is anything like what we saw on the very capable Mi 10, this could be one formidable smartphone in the imaging department. The front has a 20-megapixel selfie snapper in a punch hole notch on the top left corner – as in the Mi 10. 5G connectivity is present on the phone as well, notwithstanding its absence in India, giving it a certain future-proofedness. There are also stereo speakers, although, like the Mi 10, there is no space for the 3.5 mm audio jack! 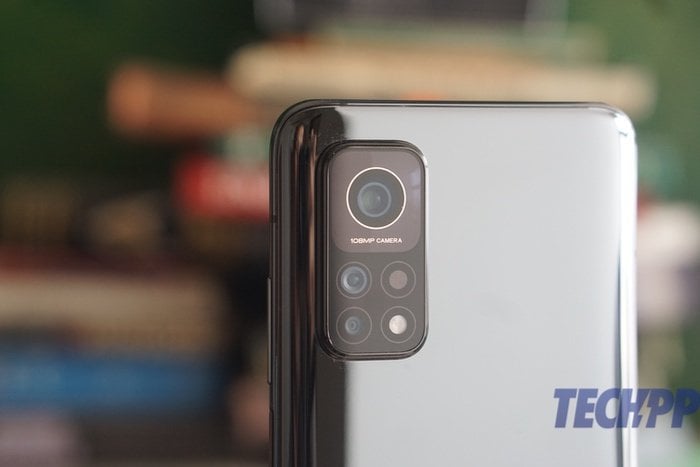 One department, apart from the refresh rate of the display, where the 10T Pro outguns the Mi 10 is the battery – it comes with a huge 5000 mAh battery with a 33W charger, which is bigger than the 4780 mAh battery on the Mi 10. This is one of the biggest batteries we have seen on a flagship device, and perhaps (!) accounts for the extra grams in weight and thickness. Of course, this being a Mi device, it comes with MIUI 12 on top of Android 10, with Android 11 said to be on the way.

A lighter Mi 10 or a contender in its own right? 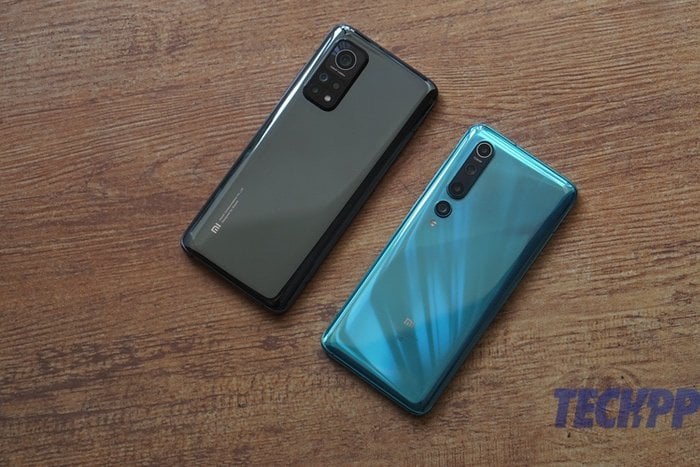 Its starting price of Rs 39,999 for the 8 GB/ 128 GB variant places it a full Rs 10,000 below the Mi 10. And notwithstanding its nomenclature, we really think that the Mi 10 Lite actually is a phone that has the potential to stand tall on its own. The display itself puts it in a zone of its own (although we expect the AMOLED fanboys will be outraged by its absence) and when combined with the potential of the cameras and the chip, there is a lot to like here. Of course, it faces tough competition against the likes of the OnePlus 8T, which was recently launched at Rs 42,999, and even Samsung’s Galaxy S20 FE which was launched at a slightly higher price (Rs 49,999) but is available at a lower price, thanks to festive season discounts. And then, of course, there is the shadow of its elder brother, the Mi 10 itself which comes with that curved AMOLED display that many love.

How it fares against that crowd will be revealed in our detailed review. But as of now, we think that the Mi 10T Pro brings a fair bit to the flagship table. It is a big phone with big specs and a not too big price. That could be a killer combo if the specs translate into performance. More in that review.

Was this article helpful?
YesNo
TechPP is supported by our audience. We may earn affiliate commissions from buying links on this site.
Read Next
With Redmi A1, is Xiaomi Resurrecting the Android One Dream, but Without Google?
#First Cut #First Impressions #hands on #mi 10t pro #xiaomi