It might have kind of ignored it for a while, but the last couple of years have seen Samsung take to the mid-segment with a vengeance, replicating the “great specs at affordable prices”: formula of other brands, and adding its own spin to the mix (generally generous servings of AMOLED). The M series in particular has been leading the brand’s charge in the Rs 10,000-25,000 segment. And now, joining it is a new series, the F series. It too claims to be targeted at Gen Z and millennials (clearly the others do not want affordable phones, but that is another story), and well, to be honest, it also seems to be trying to replicate the magic of the M series, albeit exclusively with Flipkart, with which it has been developed in “close partnership” (is that what the F stands for, really)? 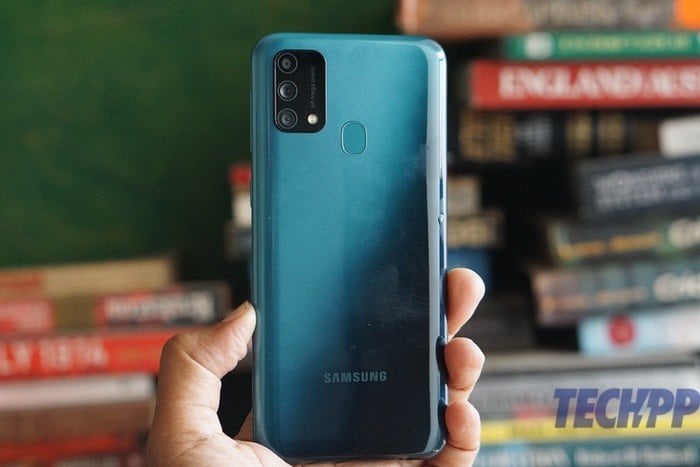 That M series formula with some (F)lair

For, make no mistake about it, the F41 does not deviate too far from the tenets of the M series. Which is not really a bad thing, when you consider how good (and successful) the phones in that series have been. It does look a little more flashy, though. Not in a loud manner. Whereas the M series have stuck to slightly sober and understated colors, the F41 comes with a design that will attract a bit of attention.

Yes, the back remains “glastic” (plastic that tries to be glassy in an attempt to be classy) but with a very distinct finish that we think looks rather nice – we got the Fusion Green variant and it definitely turned a few heads because of the way the green blended into a darker shade. There are also Fusion Blue and Fusion Black variants, but we will go with the Green one, as it seems to be the rose gold of 2020! Unfortunately, there’s no dust or water resistance, like in most of the M series.

In other design terms, the F41 is very similar to a classic Samsung mid-segmenter. The front is a large AMOLED display with a drop notch, and the back sort of curves out from the sides, and features a rectangular camera unit and a spherical fingerprint scanner. It is not a small phone at 159.2 mm in length, but is not over large and is handsome enough in a manner of its own. It is also surprisingly slim at 8.9 mm and not too heavy at 191 grams when you consider what it has inside. Which of course takes us to that part of the device.

Them (F)amiliar innards… including (an effing, as per some) processor 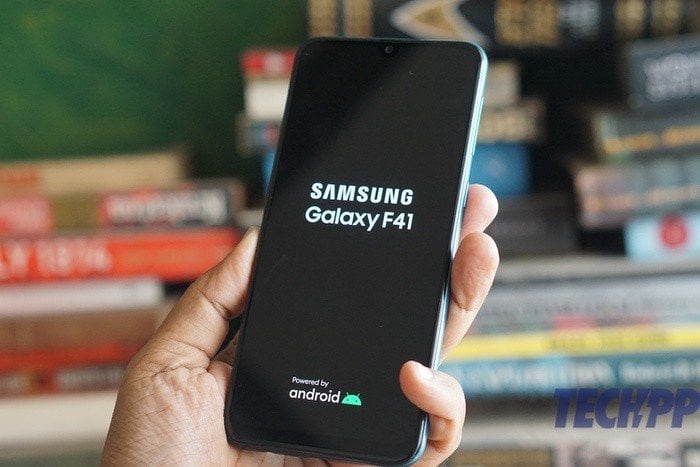 Like all mid-segment devices, the F41 fights on three major features – the display, the cameras, and the battery. The display is a 6.4 inch Super AMOLED full HD+ one, what Samsung calls an Infinity U display, and seems bright and poppy enough, although the refresh rate is 60 Hz. There is a three-camera set up at the back, with the main camera being a 64 megapixel one, backed up with an 8 megapixel ultrawide and a 5 megapixel “live focus” sensor (a depth sensor, in essence), which is a good line up at this price point, especially when you consider that it comes with Samsung’s camera software tricks like Single Take (which automatically generates edited stills and short videos for you, if you are too lazy for it). There is a 32-megapixel selfie camera, again a staple Samsung feature.

And then there is what is becoming a Samsung mid-segment trademark – a massive 6000 mAh battery (hence our surprise at the weight and thickness of the phone). Yes, the charger is not super fast at 15W but we do not see that as a massive deal-breaker. You get the usual connectivity options (4G, Wi-Fi, USB Type C, GPS), and hooray, the 3.5 mm audio jack is in place, although the speaker remains a single (and rather loud, by what we have heard so far) one. 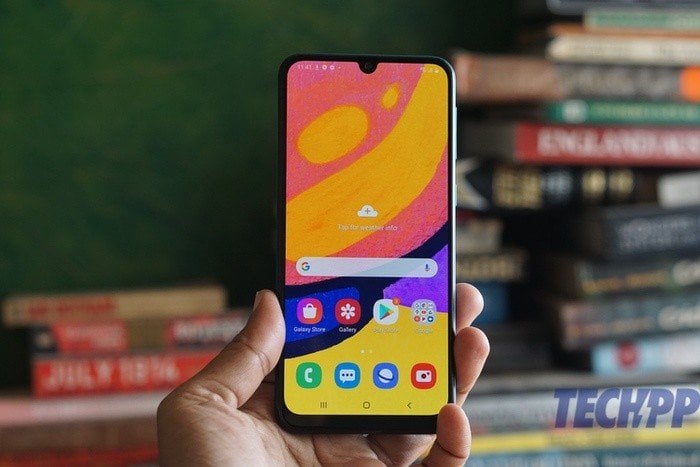 We left the one feature that some might find a sore spot for the end – the phone is powered by an Exynos 9611 processor paired with 6 GB of RAM and 64 GB or 128 GB of storage depending on the variant you choose. We have generally found the chip to be a decent performer but then it does provoke strong reactions from the Qualcomm fan brigade. It will be interesting to see how it copes with different tasks. Aiding it in its efforts will be Samsung’s OneUI on top of Android 10, which has proved to be a formidable proposition so far.

It ain’t M, but an eF-fective challenger nevertheless 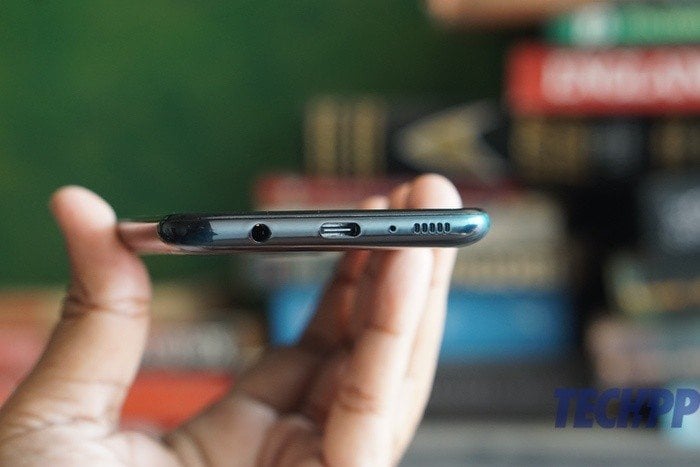 With its price tags of Rs 15,499 for the 6 GB/64 GB variant and Rs 16,499 for the 6 GB/ 128 GB one, the Galaxy F41 definitely gives off very M series vibes. And as we said, that is not a bad thing. It does face some very stiff competition, from the Redmi Note series and the Realme 7 and Narzo series and of course its own M-rated sibling, the M31s, which is priced a little higher but comes with impressive specs (a bigger display and more cameras). Just how well it fares against those worthies will be revealed in our review, but on paper, it certainly does more than enough to emerge as a challenger for the mid-segment crown.

Was this article helpful?
YesNo
TechPP is supported by our audience. We may earn affiliate commissions from buying links on this site.
Read Next
Samsung Galaxy Fold 4 Tips and Tricks: Get the Most Out of Your Phone
#First Cut #First Impressions #hands on #samsung #Samsung Galaxy F41