WhatsApp has, today, introduced the much-awaited feature on the platform, called Disappearing Messages. When available, the feature will allow users to indulge in conversations, wherein the messages automatically get deleted after seven days. For those unaware, other popular messaging platforms like Signal and Telegram have been offering disappearing messages for some time now. And WhatsApp was rumored to have been testing the feature since the start of the year. 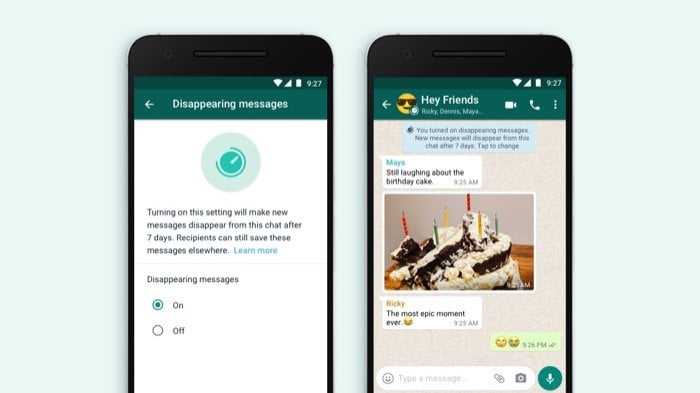 WhatsApp recently added a storage management tool on the platform to make it easier for users to clean up their storage and better manage all their media. And now, starting today, it will roll out disappearing messages to users on Android, iOS, and Web over the course of the month.

Disappearing messages, as you can guess by the name, will enable you to send temporary messages to other WhatsApp users, which will automatically get deleted after seven days. As of now, the auto-delete limit is seven days, by default. Here’s what the company has to say about the same: “We’re starting with 7 days because we think it offers peace of mind that conversations aren’t permanent while remaining practical so you don’t forget what you were chatting about.”

How to Enable Disappearing Messages on WhatsApp

How does the feature work?

Once the disappearing messages feature is enabled, the entire chat (messages + media) will disappear after seven days. However, during this period, if a user has automatic media download enabled, even though the media will disappear from WhatsApp, it will still be available on the user’s device.

Besides, even though the conversations will get deleted, there are still ways in which users can have a backup/record of the messages. For instance, they can capture screenshots or forward the messages to other contacts, which gives them a backup. Similarly, if someone replies to a disappearing message, the same exists even after seven days, and so do WhatsApp backups. However, once a user restores the backup, the messages vanish. Lastly, if a user receives a disappearing message, but they do not open it, the same gets deleted after seven days.

With disappearing messages, WhatsApp aims to “make conversations on WhatsApp feel as close to in-person as possible“, with the intention being when “conversations aren’t permanent, people can speak more freely and feel more comfortable being their authentic selves.”

Even though WhatsApp tags disappearing messages as ‘ephemeral’, they are really not that evanescent. And this is exactly why the company recommends only using the feature when you are in conversation with a trusted individual

Was this article helpful?
YesNo
TechPP is supported by our audience. We may earn affiliate commissions from buying links on this site.
Read Next
10 Ways to Fix WhatsApp Calls Not Ringing When Phone Is Locked
#WhatsApp