Hisense isn’t probably as well known in India as it is in China, or the US possibly because they have only worked as ODM (Original Device Manufacturer) for some local companies. The buzz in town is that Hisense is behind Vu’s Premium 4K lineup of televisions but we don’t know for sure. The company even acquired Toshiba’s television business back in 2017, so they really know their stuff when it comes to Smart TVs. 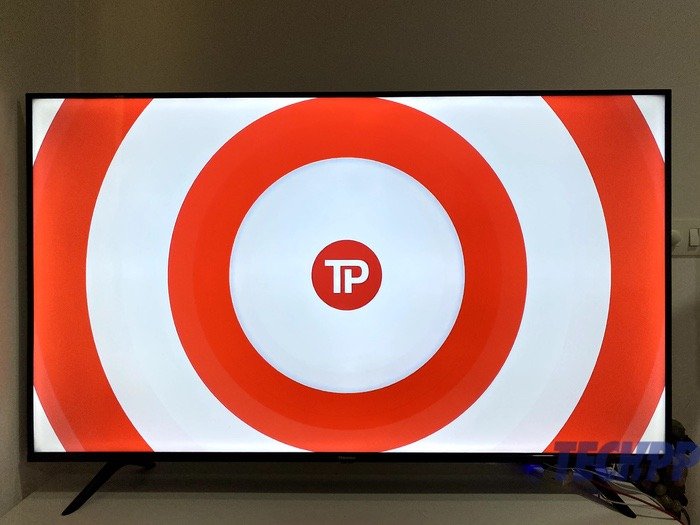 The Hisense 55A71F is one of the three new televisions which marks the entry of the brand into the highly competitive Indian Smart TV market. As you’d expect, it has a lot of similarities with the Vu 55PM but some neat additions as well. How well does it fare? Let’s find out in our Hisense 55A71F TV review.

Hisense has done well to cut down the bezels on all four sides of the display. Although the bottom bezel is relatively thicker thanks to the power LED, IR receiver, and down-firing speaker. Having said that, the design isn’t really one of the strongest points of Hisense 55A71F. It’s good but not as eye-catching as OnePlus TV U1 or Realme SLED or even the Mi TV 4A Horizon edition. But not an eyesore either. The package contains both the wall-mounts as well as table stands which is a very good thing. Do note that if you are planning to use it as a tabletop, the legs are quite wide, so you’d need quite a big table which can support a 12.6 kg TV.

The Hisense 55A71F is blessed with a plethora of connectivity ports which includes three HDMI 2.0 ports that are HDCP 2.2 compliant, two USB 2.0 ports, an optical digital out for your speakers, a headphone jack, an analog AV in, and finally an ethernet port. Of course, the TV supports WiFi (both 2.4GHz and 5GHz) and Bluetooth LE 5.0. Being an Android TV, it also comes with built-in Chromecast support. 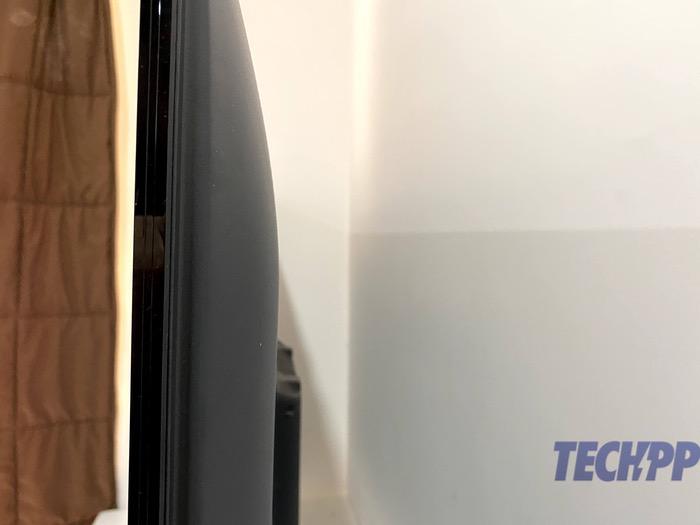 Hisense has done well to provide side-facing ports which is particularly helpful if you are wall-mounting the TV, but the ports are rather close to the center which can make it a little difficult to reach at times. The ports are placed too close to comfort which can be a pain if you are connecting multiple devices to the TV.

Coming to the most important part of the TV, the Hisense 55A71F comes with a 55-inch VA panel with UHD (4K) resolution and a 60Hz refresh rate. It’s one of the cheapest televisions to support HDR10 and more importantly, Dolby Vision. 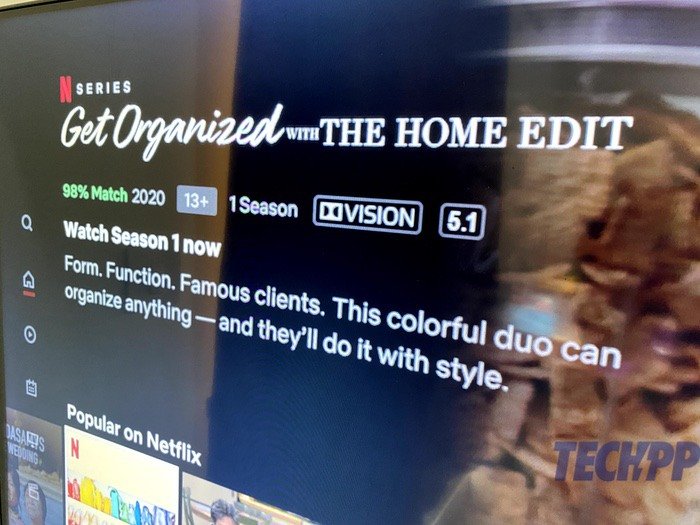 Thankfully, Netflix, Amazon Prime Video, and Disney+ Hotstar have a decent collection of HDR content and Dolby Vision content, so this is not unnecessary future-proofing. Shows like Our Planet are a pleasure to watch on Hisense 55A71F. The color reproduction is good but what’s better is the plethora of picture settings Hisense has provided on this TV.

This is by far the most comprehensive set of options I have seen on a smart TV. In addition to the basic settings like Hue, saturation, and brightness, you also get to tweak gamma profiles as well to control the contrast levels. Depending upon the level of natural light in your living room, you can adjust the gamma profile to deliver the right balance between black levels, shadows, and mid-tones. 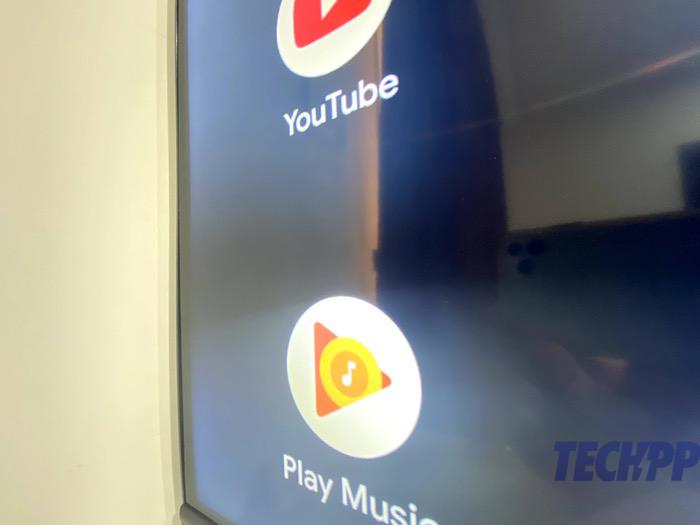 But one thing I observed on my unit of Hisense 55A71F was light bleeding at the corners. This was particularly visible within the default Android TV homescreen. Other than that, I’d rate the display performance of 55A71F pretty high for both 4K as well as FHD content, and not to mention HDR/Dolby Vision content.

There are a couple of bottom-firing speakers rated at 30 W which deliver very good audio output on the Hisense TV. It is by far the best audio performance I have seen on a LED TV in this price segment till now. Usually, the sound quality suffers at higher volumes but not here. In fact, I didn’t need to increase the volume beyond 20 even when used in a living room which is roughly 350 sqft in size. 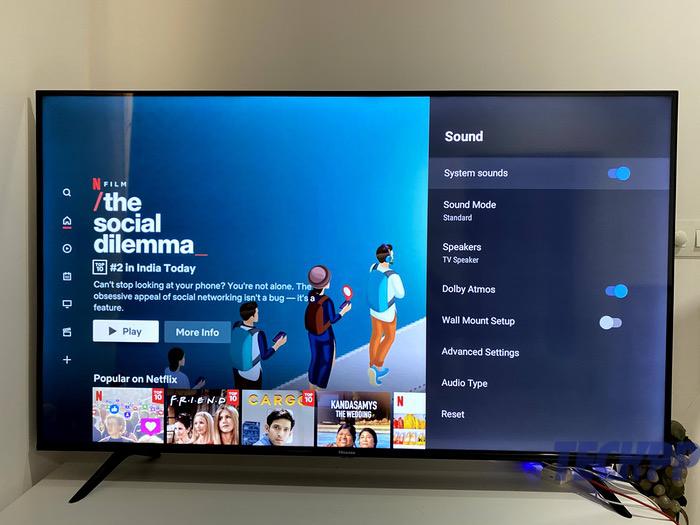 It can’t replace a high-quality soundbar but can easily do its job without disappointing you for the most part. The speakers are well-tuned out of the box, but just like the picture settings, Hisense has provided options to tweak the sound further if required. The speakers support Dolby Atmos which is getting popular on multiple OTT platforms of late.

The remote control has to be one of the most ignored aspects of smart TV these days. While the likes of Xiaomi and OnePlus have gone for minimalistic design, others like Samsung, LG, and Vu have usually opted for cluttered layouts with numpads and all. Hisense has opted for something in the middle. 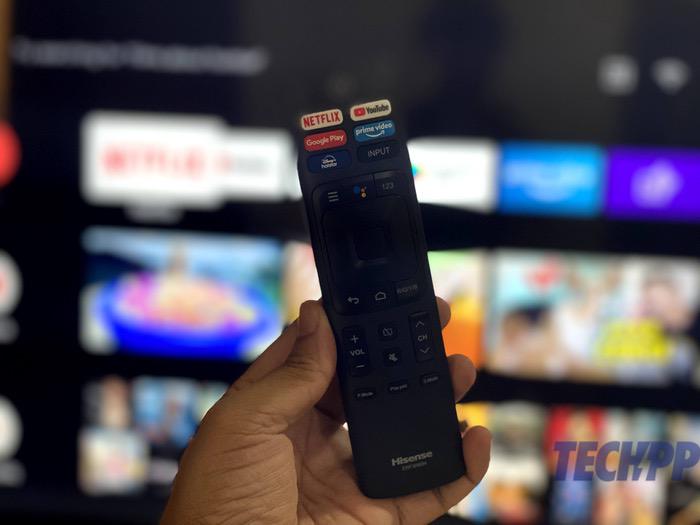 The remote has hotkeys for Netflix, Disney+ Hotstar, Prime Video, YouTube, and Google Play. While I’m all for hotkeys to major OTT players, I felt there was no need to have a Google Play button on the remote as it’s not something one would use every day. In addition to these hotkeys, there are the usual navigational keys, input keys, volume control, settings, and mute button (Hey Xiaomi!). The remote is voice-enabled through Google Assistant which is nice.

Interestingly, Hisense has also added a screen off button which I found to be very convenient while playing music on YouTube. There are hotkeys for picture and sound presets as well which are well-thought of. But the build of the remote felt too plasticky and cheap. 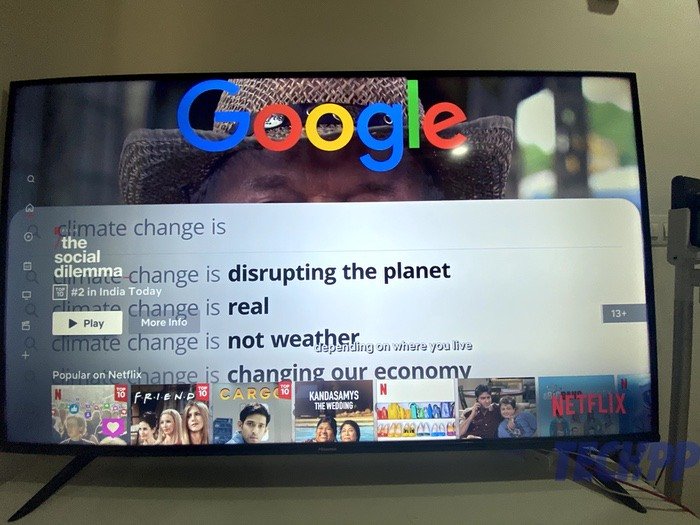 The Hisense 55A71F runs on Android TV 9.0 Pie and follows the stock user interface without any launcher on top that you see on the likes of Mi TV and OnePlus TV. Since its launch, we have seen Google launching Android TV 10 with Google TV UI but there is no word from Hisense about this TV getting updated.

One good thing on Hisense TV as compared to other Android TVs is the presence of the Settings button right on the remote along with hotkeys for picture and sound profiles. These are particularly helpful since you don’t need to exit whatever you are watching to access the settings panel or to switch picture/audio profiles. The interface is smart enough to show different presets while playing SDR/HDR/Dolby Vision content. Also, the TV supports an instant resume feature, so you can avoid the annoying 40-second bootup that you see on most Android TVs. 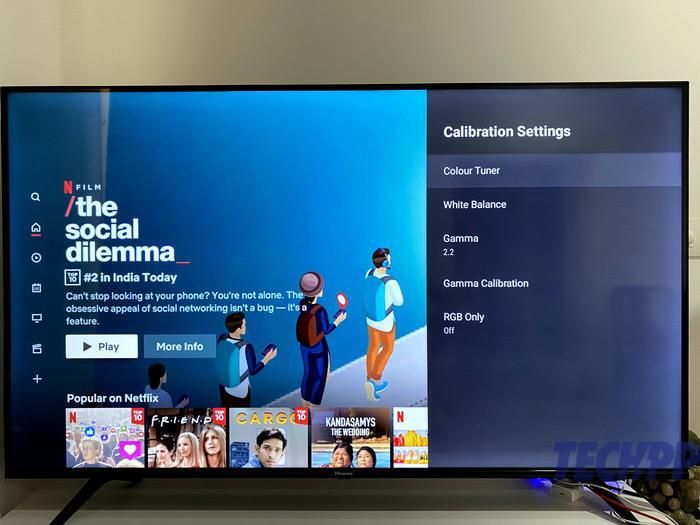 As with other Android TV devices, the Hisense 55A71F also has built-in Chromecast support and seamlessly links with other Google-enabled smart devices like smart speakers and other IoT products.

The Hisense 55A71F 4K UHD Smart TV is priced very competitively at Rs 34,990 in India and comes with the usual 1-year warranty. This is excellent pricing for a TV with Dolby Vision and Dolby Atmos support, a wide array of connectivity ports, and an excellent set of speakers. The display produces vibrant colors and sharp pictures despite the backlight bleeding on the corners. 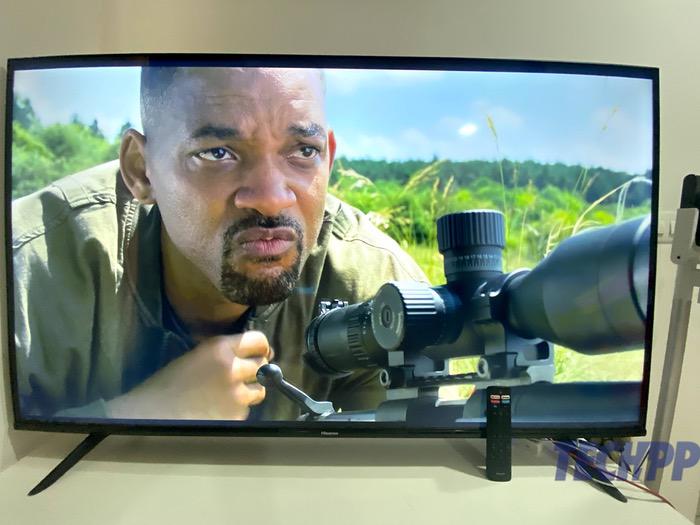 It easily matches, and at times, beats the competition from the likes of Xiaomi, Vu, and TCL (iFFALCON) in its price segment. The brand claims to have 450+ authorized service centers across the country which is reassuring when purchasing a TV from a new brand. Looking for a good 55-inch smart TV below Rs 40,000? You should definitely shortlist the Hisense 55A71F.