One of the most useful features on any system — be it a computer or a mobile device — is screenshots. Screenshot or screen capture is a way to instantly capture the contents on a screen and save it on your device in a convenient manner. That way, you can use it later in numerous different ways, depending on your use case. Besides, if you work with a lot of media, screen capture can prove to be a highly beneficial feature. However, it does have a snag. 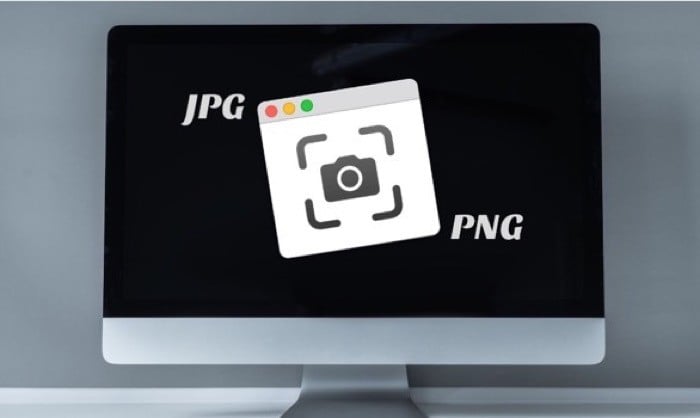 You see, depending on what system you use, the screen capture method is different across the board. However, what remains the same is the file format in which it is saved. By default, a screenshot is captured in the PNG (Portable Network Graphics) format, primarily because it is a lossless format, which does not affect the image quality of the captured image, unlike the standard image format JPEG / JPG (Joint Photographic Experts Group).

While PNG manages to retain more information, it does have a few drawbacks. The most notable ones are bigger file sizes and lack of compatibility. Since the file size of a PNG file is on the higher side, it takes time to upload. So, if you want to upload screenshots on your website, the loading times take a toll if you use files in the PNG format. On the contrary, if you use a JPG file, you don’t run into such an issue.

To work around this, a majority of computer users convert a PNG-captured screenshot into a JPG equivalent before uploading their screenshots. While that works fine perfectly, the process involves a few steps — even if you automate the PNG to JPG conversion workflow. To add to that, most PNG to JPG (or any other format) conversion methods do result in some loss of image quality. Although most people are fine with that, there are some who do not want to compromise on image quality. If you fall into the latter crowd, here’s a workaround to help you capture screenshots in JPG without losing image quality.

Our workaround involves capturing screenshots in JPG format by default. That way, you get an output with slightly better quality and do not have to go through the tedious image conversion process every time you want to use a screenshot.

1. Open Terminal on your Mac. To do this, open Spotlight Search [command + space] and search for Terminal.

2. In the Terminal window, enter the following command: 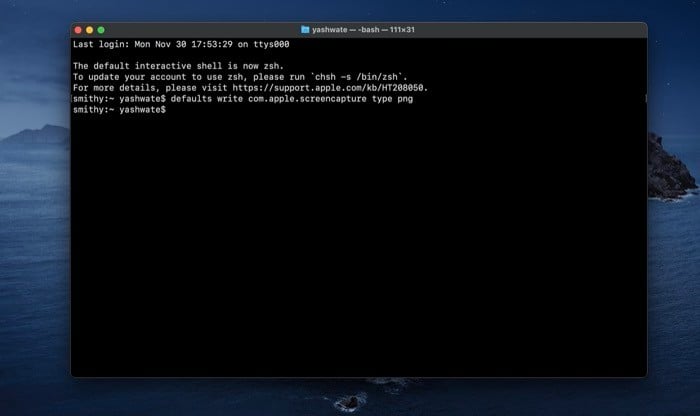 [Note: when you input the above command, make sure you enter it as is. You can either copy-paste the code directly or enter it manually.]

When you hit return, the command should run without throwing any errors. And you should now be able to capture screenshots in the JPG format. Hit the screenshot shortcut (shift + command + 3 [or 4, or 5]) to capture a screenshot. Now, head to the location where the screenshots are saved on your Mac. By default, they are saved on the Desktop. Once here, click on the screenshot you just captured and check the image format. If it is JPG, the command works. However, in case it still shows PNG, head over to the Terminal window again and enter the following command:

Repeat the process to see if the command worked. If it didn’t yet, restart the computer and try the steps again.

Moving right along, if your work involves working with screenshots or you take a lot of screenshots for personal use, we suggest you save all your screenshots in a separate folder so that they are well organized and easy to find. For, by default, the screenshots you take on a Mac are saved on the Desktop, which is not an ideal way to save files by any stretch. And therefore, we recommend you change the default location of screenshots to a custom one.

Related Read: How to Take a Screenshot on Mac

How to change the default Screenshot save location

There are two methods to change the default screenshot save location on Mac.

Method I: Using CLI (or Terminal)

1. Open Finder and go to the location (on your drive) where you want to save the screenshots.

2. Here, create a new folder and give it a name.

defaults write com.apple.screencapture location 'path to the folder you want to save the screenshots in' 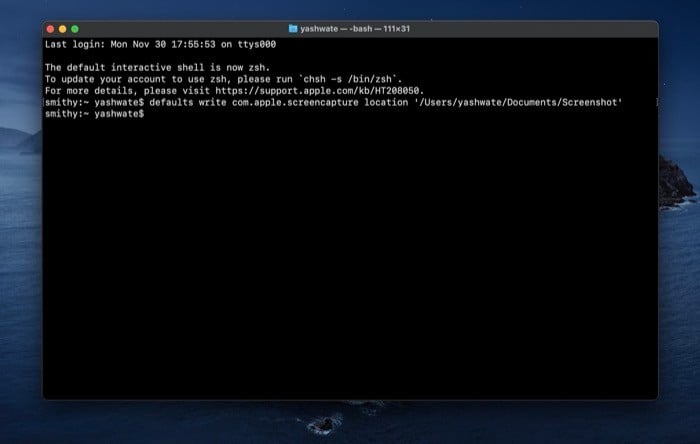 [Note: if you do not know the path to the folder you just created, simply open it in a new Finder window and drag it onto the Terminal window. Make sure the path is within single quotes.]

The default screenshot save location should now be changed to your preferred one. To ensure that the changes have been applied, take a screenshot again and look for it in either location. If it appears in the new location, the default location is successfully changed. However, if it hasn’t, go back to the Terminal and make sure you enter the command with the correct path. Furthermore, in case you want to revert the changes, enter the following command:

1. Press the shortcut (command + shift + 5) to open the screengrab window.

2. Here, click on the Options button on the small menu bar, and under Save to, select a location. If the location you want to set is not listed, choose Other Location…, and pick a location from the Finder window that pops up. 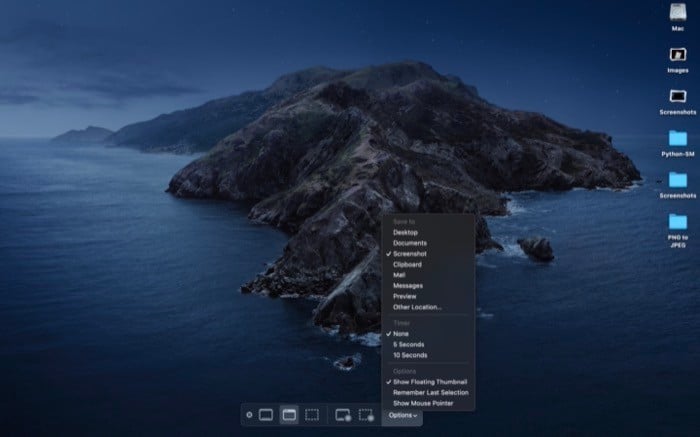 Your default screenshot save location should now be changed to the new location. If you wish to change it back to the factory default in the future, follow the same steps, and select Desktop under Save to.

Now that you have managed to change the default format and the default save location for screenshots on your Mac, you should have more control over your screenshots. And as already mentioned, in case you want to go back to the defaults, you can always revert the changes using the steps listed above.

Was this article helpful?
YesNo
TechPP is supported by our audience. We may earn affiliate commissions from buying links on this site.
Read Next
Best Places to Buy Refurbished MacBook or Mac [2023]
#apple #how to guide #MAC #macOS #screenshots #Tiny Tip