Facebook-owned messaging app WhatsApp today announced that it is postponing its plans to implement the new privacy policy changes by three months. This extends the standing February 8 deadline for the users — to accept the new terms of use that the company had in place — to May 15.

The move from Facebook comes at a time when several WhatsApp users complained about the new changes in its privacy policy — changes that suggested that the messaging platform will soon start sharing a few different types of user data with its parent company, Facebook. For which, users were required to agree to and accept the new policy update before February 8 or risk the chances of getting their accounts deleted.

While some users accepted the agreement and were fine with the new changes in WhatsApp’s new privacy policy, a lot of others started leaving WhatsApp and jumped on to the Signal and Telegram bandwagon — to a point where Signal faced a global outage last night due to a large number of new users getting on board.

Amidst all the misinformation that started floating due to WhatsApp’s call on sharing data with Facebook — for which the company had to come up with a clarification — along with user apprehension around data privacy, WhatsApp finally took matters into consideration and came up with a new update. As mentioned initially, the new update extends the deadline for users to accept the new privacy changes from February 8 to May 15. This means, if you ignored to accept the agreement, your account will not be suspended or deleted on February 8. And instead, you will have time — till May 15 — to review the policy and agree to the new changes. 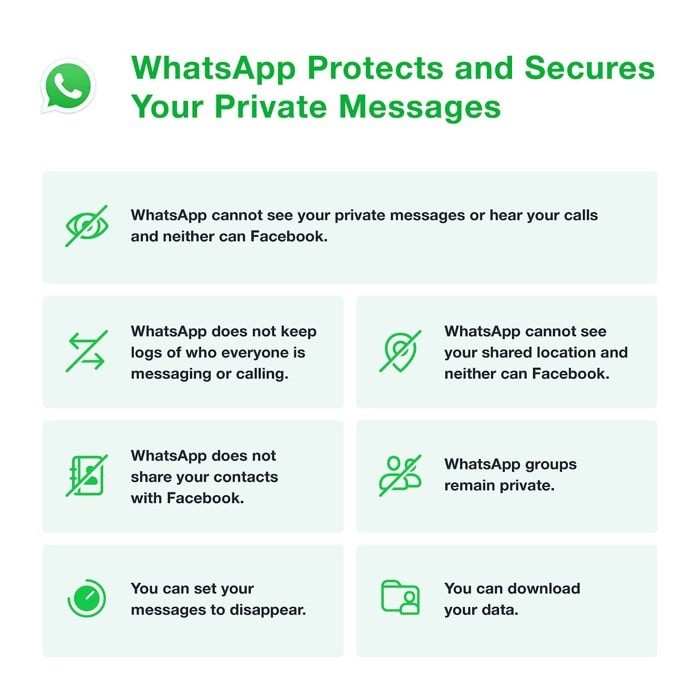 Besides extending the deadline, the company also seems to be taking matters into its own hands to clear misinformation around its new policy. In its (latest) release, WhatsApp said: “We’re also going to do a lot more to clear up the misinformation around how privacy and security works on WhatsApp. We’ll go to people gradually to review the policy at their own pace before new business options are available on May 15.”

Thank you to everyone who’s reached out. We're still working to counter any confusion by communicating directly with @WhatsApp users. No one will have their account suspended or deleted on Feb 8 and we’ll be moving back our business plans until after May – https://t.co/H3DeSS0QfO

“WhatsApp was built on a simple idea: what you share with your friends and family stays between you. This means we will always protect your personal conversations with end-to-end encryption, so that neither WhatsApp nor Facebook can see these private messages. It’s why we don’t keep logs of who everyone’s messaging or calling. We also can’t see your shared location and we don’t share your contacts with Facebook”, the company added.