[First Cut] Lenovo Chromebook Duet: The Chromebook that we need to talk about

There are some products that make you wonder why more attention is not paid to them. The Lenovo Chromebook Duet is one of them. It has gathered global acclaim as one of the best value-for-money notebooks around, but in spite of having been in India for a while, has largely been well off the gadget radar. This is curious when you consider that the product comes from a brand as well-known as Lenovo. 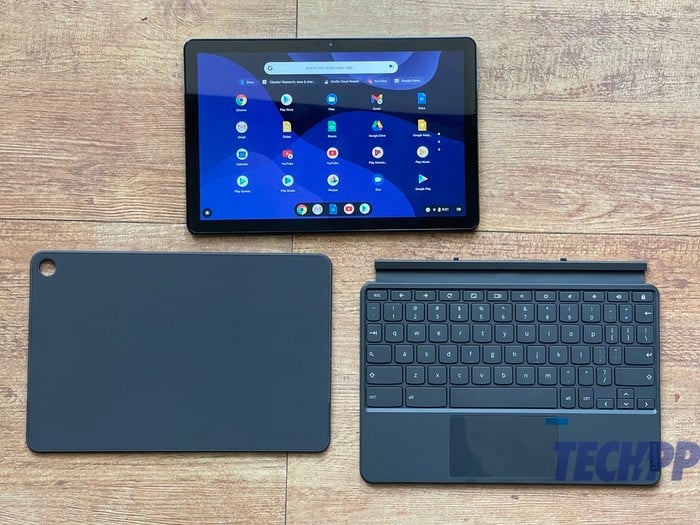 I got access to the device a day ago, and well, I must confess that I am a little confused as to why it has not got more attention. For, what you get with the Chromebook Duet is a 10.1 inch full HD tablet, a full QWERTY keyboard with a touchpad that can be magnetically attached to the tablet and covers its front, as well as a back cover that adds a kickstand to the tablet. All that is in the box.

And it all looks very smart and comes together very well too. The tablet itself is reasonably bright and has a very interesting light blue and metal finish on the back, which also sports an 8-megapixel camera. On its right side or the top (depending on the orientation) are a power/display key and buttons for volume, as well as a USB Type-C port for charging. On one of the longer sides are a pair of speakers and on the other are contact points for the keyboard.

The keyboard is a little on the smaller side, I guess as it had to blend in with the size of the display, which is smallish for a proper notebook. That said, the keys are reasonably well-spaced and seem to have decent travel. The keyboard attaches magnetically to the tablet through magnetic contact points. It is a snug fit and comfortable enough to use. This is not what can be said about the textured grey back cover with a kickstand. Maybe I have not mastered the art of getting the hinge on the stand out properly, but almost every time I have tried taking the stand out, I have ended up almost taking off the back cover as well (which also attaches magnetically to the tablet). Perhaps, things will improve with practice – the stand itself seems a little on the rigid side. 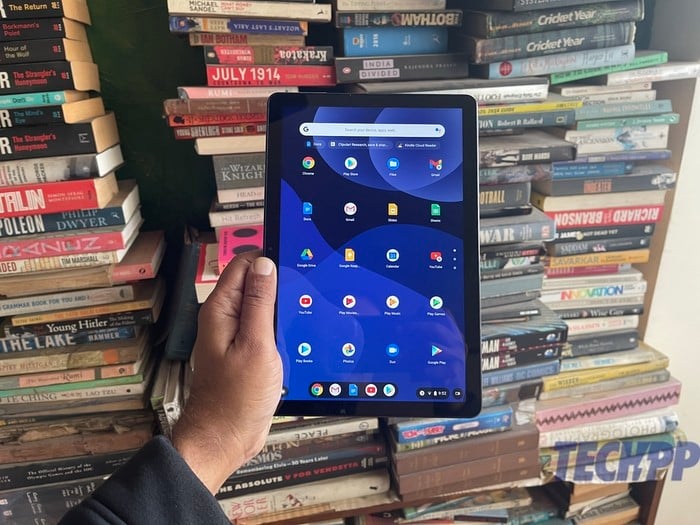 That said, when combined, the three elements make for a very smart looking and incredibly lightweight notebook. The tablet itself is about 420 grams, and with the keyboard and the back cover, the entire unit is about a kilogram in weight. That’s very lightweight by any standards.

“Lightweight” is also the word some might use to describe the specs of the device. Yes, the Duet comes with a 10.1 inch full HD display which is reasonably bright and responds well to touch, but it is powered by a MediaTek Helio P60T chip, which is not exactly high-end. It also comes with 4 GB RAM and 128 GB of storage, which is not expandable. There is an 8-megapixel camera on the back, while on the front you have a 1.2 megapixel one, which is just about all right for video calls. There are stereo speakers with Dolby sound, and connectivity wise, you have Bluetooth (4.2 though) and Wi-Fi. No, there’s no 4G on board. Battery life is said to be around ten hours, which is impressive, but the charger accompanying the device is a 10W one. There is incidentally, no 3.5 mm jack or any other port on the audio, although you do get a USB to 3.5 mm adapter in the box. Of course, running on top of all this is Google’s Chrome OS, now with support for Android apps and the Google Play Store. 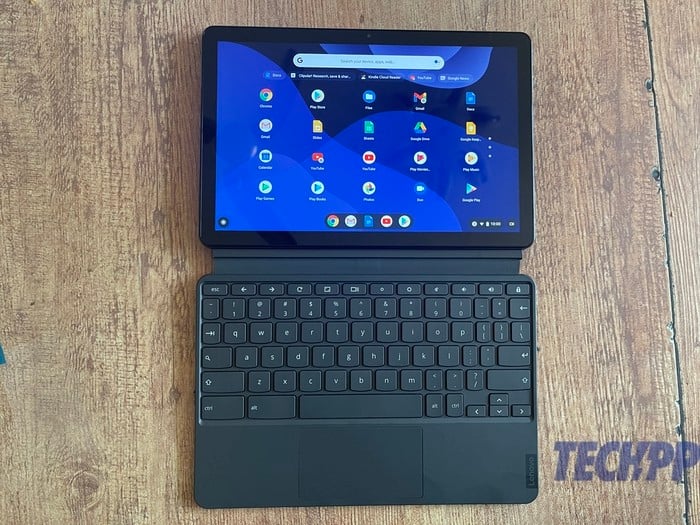 Those are not exactly path-breaking specs, but then Chromebooks are supposed to be light, low-cost, and swift devices, designed mainly to run apps off the Web (although it can run them offline as well), rather than be high-end gaming monsters. And from my experience so far, the Duet does tick those boxes – it starts up and shut down literally in seconds, can slip into any bag easily, and surfs the Web at a brisk rate. Then there is the price – the Lenovo Chromebook Duet is officially priced at Rs 27,999 but is often available at lower prices (such as Rs 24,999). Yes, that is in the range of Windows notebooks powered by Intel’s Celeron chips and also the base iPad, but there is hardly any other device out there that comes with the Duet’s versatility – you can use it as a tablet and a notebook, depending on your inclination, without having to shell out extra bucks for accessories. No, I do not expect it to bust gaming benchmarks, but it has the potential to be the perfect notebook for anyone into a lot of research and writing – folks like students, editors, and of course, writers and journalists.

To find out if it does achieve that potential, stay tuned for our review.