Apple held its first event for 2021 yesterday where it launched a host of new hardware products, the AirTag, iPad Pro with M1 and the new Apple TV 4K being the highlights of the show. Another product that a lot of people were expecting was a new and updated iMac with refreshed internals and outer chassis and Apple did exactly that. The 24-inch iMac has received a major overhaul both on the inside and the outside and is now trendier to look at and packs the power of Apple Silicon. 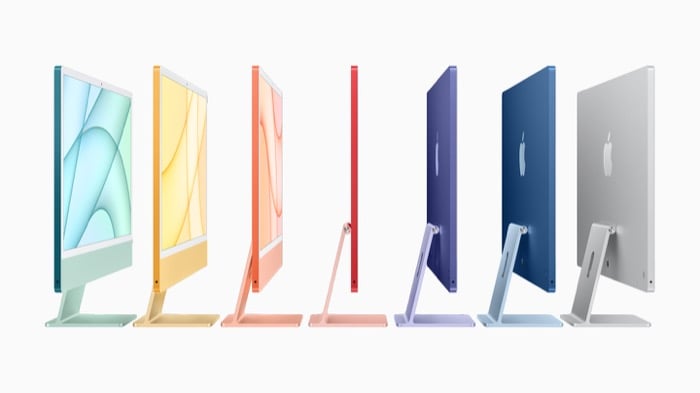 If you are interested in the new iMac and are planning to get one for yourself, we will try to highlight all the new improvements and features in this article to help you figure out if you should get the new iMac or not and how big of an upgrade it is compared to the older generation iMac that came with Intel chips and a bulkier, older design. 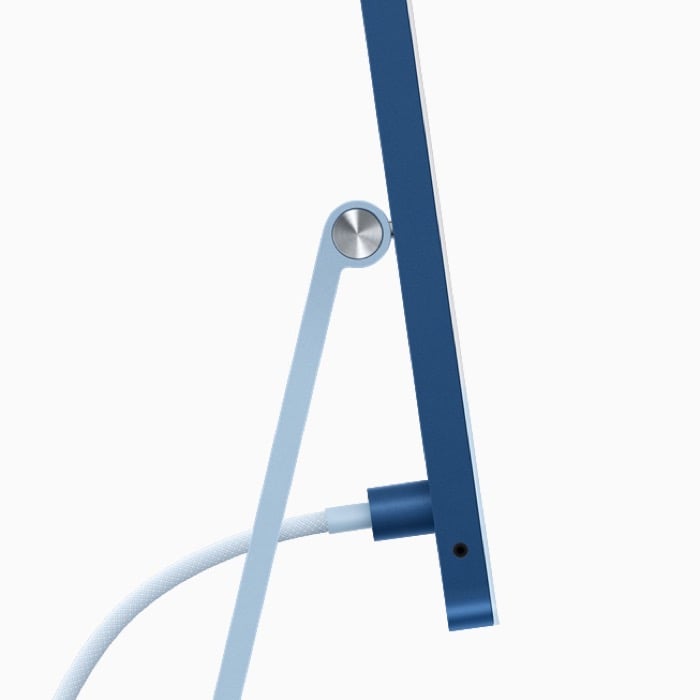 If you have seen older iMac computers, you would know that they were quite thick and bulky on the rear. This was understandable since the iMac is an AIO or All-in-One and fitting in all components inside a chassis that also houses the display does take a considerable amount of space. However, by doing away with the Intel chips from the older iMac, Apple has managed to reduce the cooling requirement for its homegrown M1 chip, hence reducing the bulk drastically. The new 24-inch iMac is just 11.5mm thin which makes it easier to move around as well as gives it a modern look. 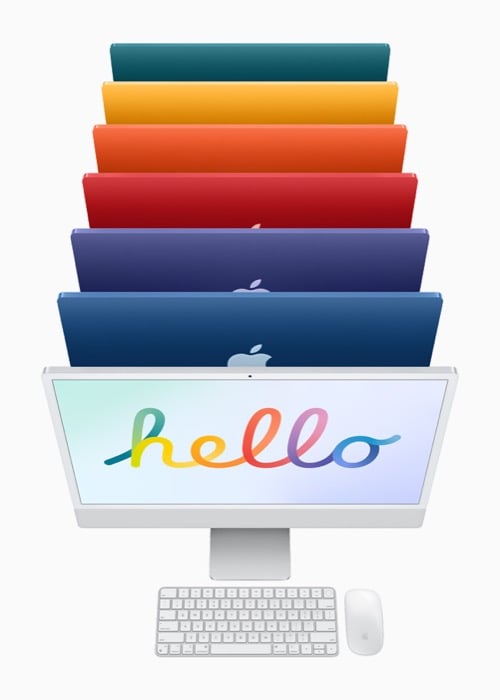 Unlike the older iMac that had a standard silver metallic look, the new iMac offers multiple color options to choose from which also adds an element of fun to the design. With the iPad Air last year, Apple adopted a fresh color pallet and have carried it over to the new iMac as well which makes it stand out. You can now choose from green, yellow, orange, pink, purple, blue, and silver, based on whatever suits you. 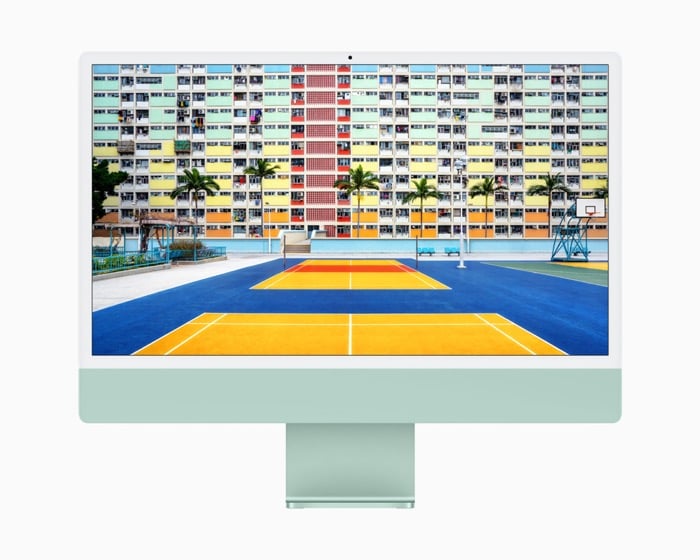 A major highlight of the iMac over the years has been the high-quality display that Appl offers and that in itself was a convincing factor for a lot of consumers to get an iMac over a PC or a computer with an additional monitor. The new iMac retains the gorgeous 4.5K Retina display that covers 24 inches diagonally and has 11.3 million pixels and a peak brightness of 500 nits which is plenty for a computer. Whether you are going to watch movies or edit videos on the iMac’s display, you are surely going to enjoy the immersive experience.

One gripe, however, is that Apple stuck to thick bezels on three sides with an even thicker chin on the bottom that takes away from the overall look of the new iMac. What can further be an eye-sore is that the display is surrounded by white bezels instead of the usual black which can be rather distracting or take away the immersive feel while consuming content. 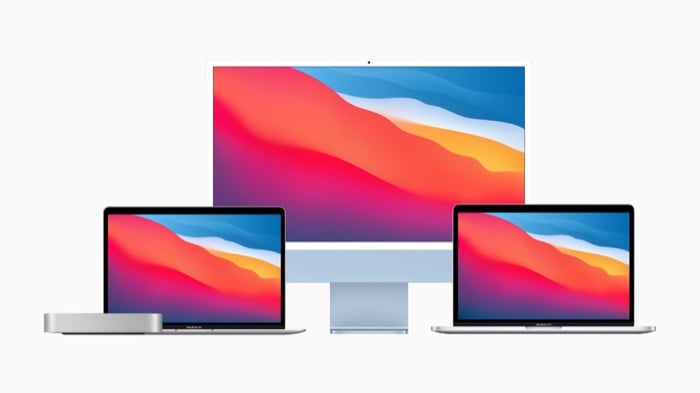 Apple is currently in its transition phase with regards to its computers and is gradually migrating all of its Mac computers to its own Silicon. The new iMac has also received the same treatment and now comes with Apple’s M1 chip that was unveiled last year with the new MacBook Air, MacBook Pro 13, and the Mac Mini. By replacing Intel’s chips with the M1, Apple has managed to boost the performance on the iMac considerably both in terms of CPU as well as GPU capabilities and has also been able to achieve a slimmer design due to the fact that the M1 runs a lot cooler.

The 8-core M1 CPU is reportedly up 85% faster in terms of CPU performance and offers twice the amount of GPU performance of the 21.5-inch iMac with a discrete GPU. It can even edit up to 8K video and the 16-core Neural Engine aids with 3X faster Machine Learning in apps.

After years of pleading, Apple has finally listened to consumers and has replaced the potato FaceTime camera with a 1080p sensor for video calls which Apple refers to as the best camera in a Mac that can even deliver reliable performance in low-light. Along with an improved camera, Apple has also included studio-quality microphones that capture crisp audio and can cancel out background noise during calls and recordings.

Finally, Apple has also updated the speakers on the new iMac by including two pairs of force-canceling woofers placed side by side for improved bass response. Each pair is coupled with a tweeter as well resulting in a six-speaker surround-sound setup that supports spatial audio when playing content that supports Dolby Atmos. 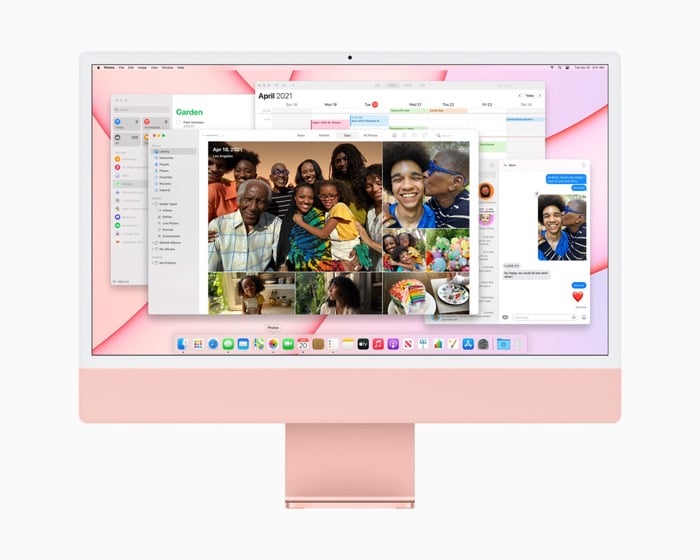 The new iMac runs macOS Big Sur and the fact that it is using Apple’s M1 chip enables it to run iOS and iPad OS apps natively. This means you can have a seamless experience while using all of your Apple devices and you can also run some apps and games that are not available on the Mac App Store but can be sideloaded from your iPhone or iPad. More and more developers are working on supporting their iOS and iPad OS apps on Mac so the list will keep growing. 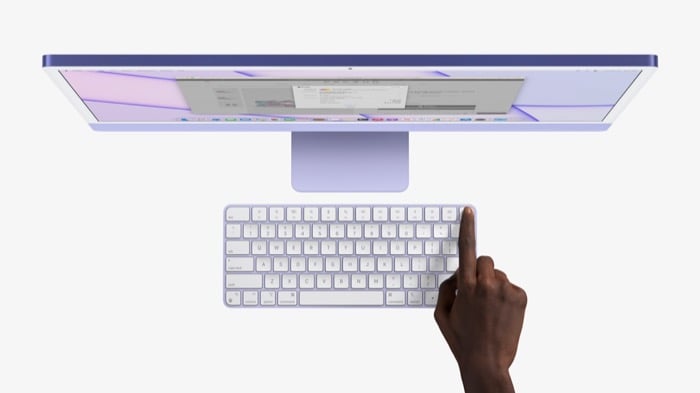 The new iMac comes bundled with Apple’s Magic Mouse and Magic Keyboard which are now color-matched to the color of the iMac you pick. A welcome improvement along with the new colorways is that the keyboard now includes TouchID to help with a seamless login process while using the iMac. TouchID can also be used to authorize payments, use Apple Pay, access KeyChain, and also switch between multiple users. Note that the base variant of the new iMac does not come with TouchID. 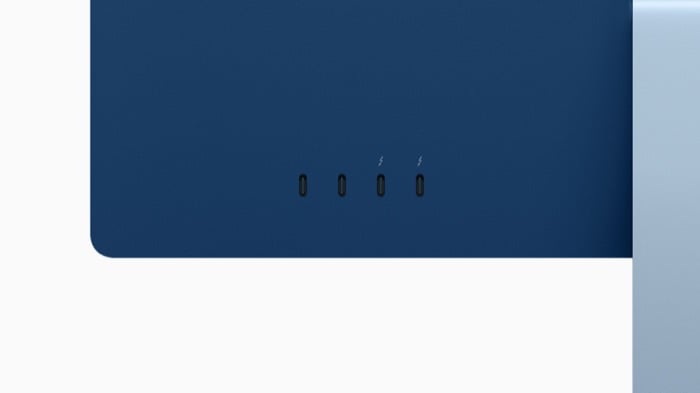 The new iMac features two Thunderbolt ports that support up to a 6K display including Apple’s Pro Display XDR and Wi-Fi 6 for faster connectivity. The 8-core config additionally gets two more USB-C ports along with a 1Gbps Ethernet port on the power adaptor.

The new 24-inch iMac will be available to purchase starting Friday, April 30th on apple.com as well as select offline authorized retailers in the second half of May. The base configuration with a 7-core GPU starts at $1,299 in the US and Rs. 1,19,900 in India and will feature 8GB of RAM and 256GB of SSD storage. The higher-end config with the 8-core GPU and the same amount of RAM and storage will retail for $1,499 in the US and Rs. 1,39,900 in India.

Student Discount on the new iMac

Students can avail up to a 10% discount on the new iMac by registering with your University email ID on Apple’s website. The base config iMac can be bought for Rs. 1,07,910 and the variant with the 8-core GPU will be available for Rs. 1,25,910 which is a good deal if you are a student.

Was this article helpful?
YesNo
TechPP is supported by our audience. We may earn affiliate commissions from buying links on this site.
Read Next
With Football Manager 2023 Touch, Apple Arcade finally has its “killer ...
#apple #Apple M1 #iMac