It is the most popular computer OS in the world and now it is set to get a new version. Yes, we know there had been some talk of 10 being the final Windows, but then the good folks at Redmond decided that one never said never and now, we have Windows 11 on the tech horizon. So even as the door opens for a new Windows in our lives (pun SO thoroughly intended), what better time to look back at some really quaint facts about the operating system that rules PCs around the world? For, while Windows is extremely popular, it still has a few facts that are relatively lesser-known. A bit like the popular kid in school that everybody likes but does not really know.

Without any further ado here are ten amazing facts from the Windows history vault.

Imagine if the most used computer interface in the world was called something as boring as Interface Manager? Well, it almost was. Microsoft co-founder Bill Gates actually wanted it to be called Interface Manager. Fortunately, Microsoft usually uses one-word names for its products and because the UI had multiple windows that allowed the users to run various tasks at once, the name ‘Windows’ came up. Rowland Hanson, the head of marketing at Microsoft then convinced the team that the name Windows would be more suited to users and saved us from what could have been a very boring name for our computer interface.

Windows One, and (less than) One MB 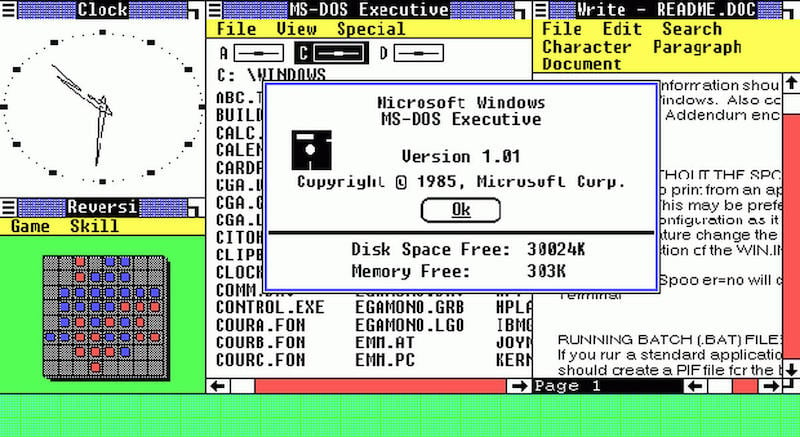 Naming Windows has not quite been a linear process for Microsoft. The latest version of the OS might have you believe that the interface has simply climbed up the number ladder over the years but Microsoft has very conveniently gone sideways, in circles, and in every shape and axis possible while coming up with a name for the different versions of the OS (we do not know what happened to Windows 4,5,9 and a few others). But the first Windows went hand in glove with its numerical suffix and was called Windows 1.0. And well, it was special in terms of resources consumed – it was less than 1 MB in size, which many say is another reason for it being called “1”! Incidentally, it required a massive 256 KB (yes, KB) of RAM to run.

Introducing the very first Windows version in November 1983, Bill Gates mentioned that it was a “unique software designed for the serious PC user”. The project was led by Bill Gates himself and it ran on top of MS-DOS. It relied heavily on the use of a mouse to work with its point-and-click programs, something which was extremely rare back in those days. To make users more familiar and comfortable with the software, Microsoft included a game called Reversi which was mouse controlled. The OS also came with applications like Paint, Notepad, Write (a word processor), and Calculator. 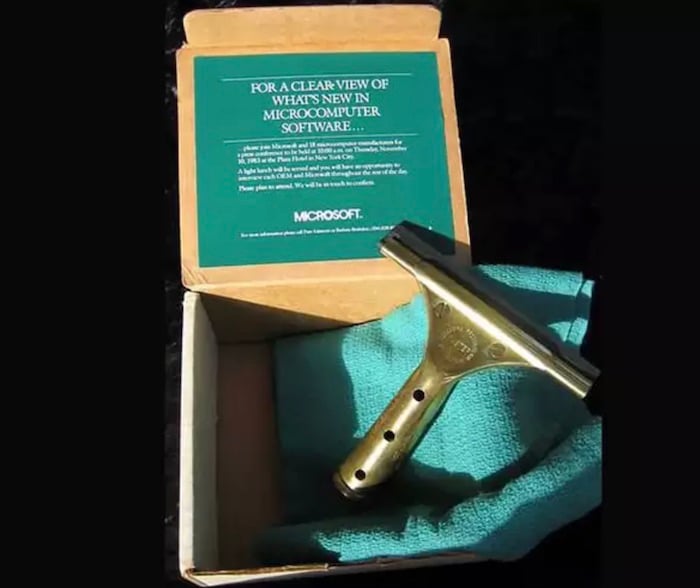 Microsoft might be seen as a serious brand but the company has had a knack for cheeky humor as well. During the launch of Windows 1.0, Microsoft reportedly sent out a press kit with a Squeegee (a window cleaning tool) and a washcloth to journalists, in a box with a note that read “For a Clear View on What’s New in Microcomputer Software.” A clean game? We think so!

Many know Steve Ballmer as the super-in-your-face former CEO of Microsoft but long before he climbed that corporate ladder up to the very top, he was actually the first-ever business manager of the company. And he had been working for Microsoft for six years when Microsoft launched Windows 1.0. To advertise the software in 1986, a typically enthusiastic and aggressive Steve Ballmer channeled his inner salesman and delivered the hardest selling pitch one could at that point.

He brought excitement, enthusiasm, and a head of hair to the commercial. Now THAT is something worth remembering. Of course, he would later do the famous “Developers Developers” cheerleading act, but that was perhaps the first time we got a hint of what Steve Ballmer was about.

When do you get to see a tech giant’s top executives dance during a product launch on stage? Well, that a rather rare phenomenon occurred during the launch of Windows 95 when Bill Gates along with his executive team was seen shaking a (rather sheepish, in some cases) leg to the Rolling Stones’ iconic “Start Me Up” – check it out above, and yes, Ballmer is, as usual, having more fun than others. The song was used as the theme song for Windows 95 launch and the brand paid a hefty USD 3 million for it back in the day. The song became so linked with Windows 95 – it was believed to reflect the Windows 95 philosophy of simply starting up without having to type at DOS prompts – that for the 20th birthday of Windows 95, Microsoft made it available for free for one day for people to download.

Starting up Windows…on a Mac!

Windows 95 had a pretty massive marketing budget. After all, it was the first Windows that came with a totally graphical user interface (no need to mess around with DOS prompts). To compose its startup sound, Microsoft turned to one of the most influential figures in the music world, Brian Eno. Eno, who has worked with the likes of U2 and David Bowie, was evidently given a list of adjectives and was told that the start-up sound had to represent and reflect all of them. Oh, and it was to be about 3.25 seconds long. No pressure!

Eno was fascinated by the challenge (he compared it to making a tiny jewel in an interview) – and claims to have produced 84 pieces of music, one of which was accepted.

The result was a rather distinct sound, although it never became quite as iconic as the most popular startup sound of all. But that is another story and another point in this story. The irony is that he composed the startup sound of a PC OS on a device seen by many as its biggest rival – a Mac. Eno had never used a PC!

When Windows came crashing down on Gates!

Everyone remembers the time when an iPhone presentation crashed on stage but did you know the same happened to its arch-rival? Well, it was the launch of Windows 98 and the software glitched right in the middle of Bill Gates’ presentation at Comdex on 20 April 1998.

Chris Capossela, who is now the Chief Marketing Officer and Executive Vice President of Consumer Business in the company, was supposed to plug a scanner into a Windows 98 computer. This was to show the plug-and-play feature of the OS. But then something that every presenter dreads happened as the famous Blue Screen of Death covered the screen. A very surprised Capossela muttered “Woah” and honestly, we get the same feels even when we see the video today.

Gates gave this disastrous moment a light edge by saying, “This must be why we are not shipping Windows 98 yet.” The next time your presentation crashes, remember it could happen to anyone – heck, it happened to Steve, it happened to Bill. It generally will be okay. Windows 98 certainly was.

The most viewed image in the world…is a Windows wallpaper! 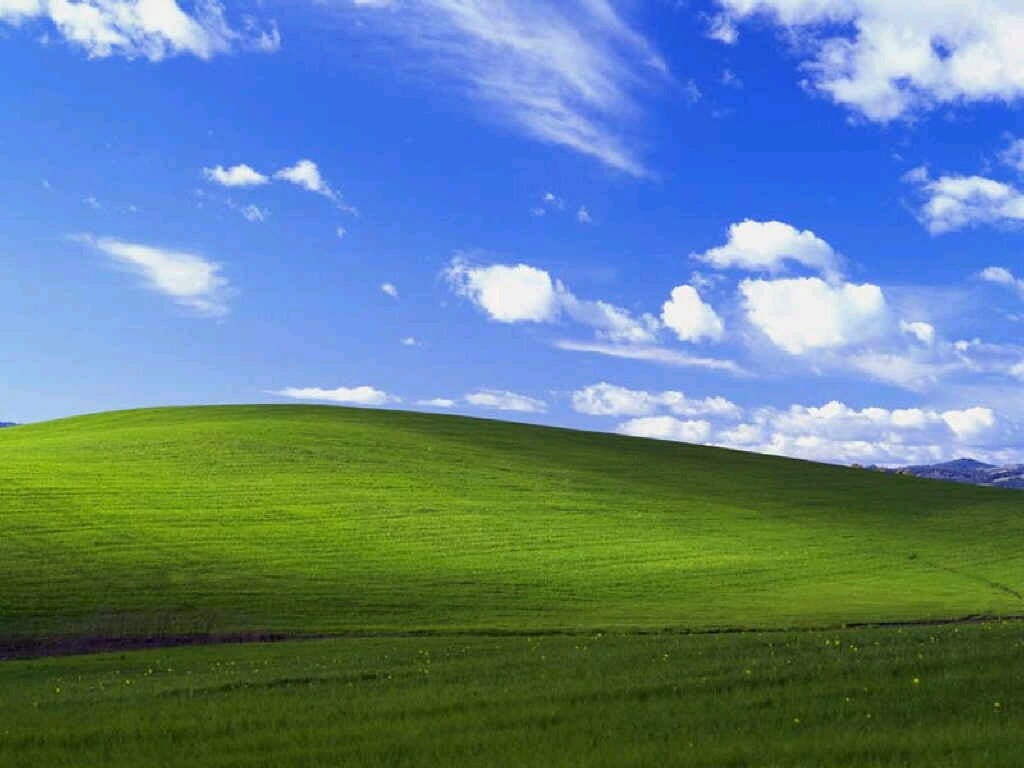 All Windows devices have had their own distinct wallpapers and interfaces, however, there has perhaps been no Windows “look” that has been as famous as the default wallpaper on Windows XP. Windows XP came with a default wallpaper called “Bliss” which consisted of a bright blue sky and a small green hill. For years many assumed it to be a painting only to find out later that it was an actual photograph taken by Charles O’Rear in California. The photo is believed to be the most viewed image in the history of the world.

Windows has always come with different startup sounds for its machines (and as we saw in an earlier point, some have been composed by big names in the music business). Some have been hits while some did not really stick in the mind, but unarguably the most iconic of all was the one that accompanied Windows XP. That shimmery, startup chime was based on live orchestral recordings and was composed by Bill Brown who worked with Emmy-award-winning sound designer Tom Ozanich to create the audio. It goes without saying, what “Bliss” was for wallpaper on Windows, the chime was for startup sounds.

Was this article helpful?
YesNo
TechPP is supported by our audience. We may earn affiliate commissions from buying links on this site.
Read Next
How to Use Android Phone as Webcam for PC
#bill gates #Case in Point #Facts #microsoft #Steve Ballmer #windows #windows xp