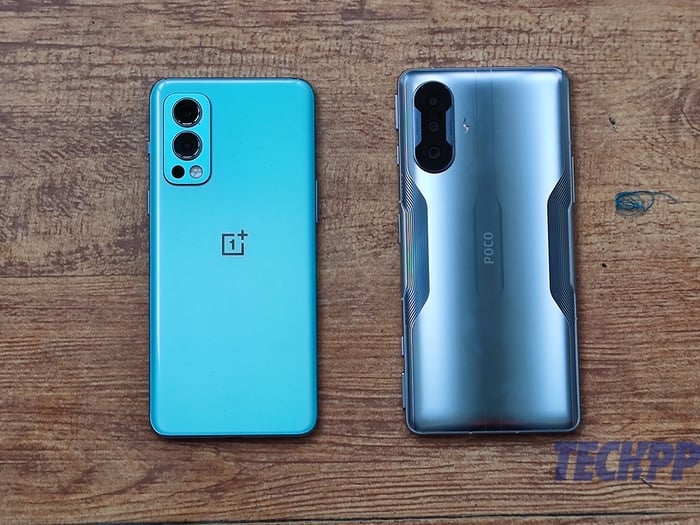 So which of the two should you be going for?

Design: Totally one-sided, and there’s no plus on that one!

(Disclaimer: This is as one-sided as it gets. Yes, the Nord 2 is a good-looking phone, but it does not really stand a chance in the design battle against the Poco F3 GT. Sorry, not sorry.)

The two phones are polar opposites when it comes to design, with one following a more traditional design blueprint while the other is anything but traditional. A tall display with thin bezels, paired with glass on front and back with a plastic frame sandwiched in between, is the story of pretty much every other smartphone these days, and The Nord 2 is one of those smartphones. It walks down a very similar design aisle that the original Nord had once walked before and comes with a tall glass front coupled with a glossy glass back. Even though the back of the Nord 2 is glossy, glassy, and shiny, it does not really get smudged too easily. The phone’s design is in line with what is in trend, making it very smart and giving it a familiar yet fashionable look. The phone also feels quite solid, which is another plus. There is a sizeable camera unit on the top left corner of the back with a significant bump, but it is again something we are seeing a lot in smartphones and is nothing perplexing.

The Poco F3 GT could not be more unconventional. Even though it follows the same basic design principles – tall display with thin bezels, glass on front and back – it is the implementation of these basics that make it a stand-out design. In fact, it is perhaps the most eye-catchy design we have seen in this price segment in a long, long time. The glass back and front of the phone are paired with a metal frame. We received the Gunmetal Silver color of the phone, and it took us straight back to the metal-phone days as the glass back of the F3 GT mimics the look of metal so brilliantly. The back also dons some engravings and patterns that help the metallic color stand out even more. There is a capsule-shaped camera unit on the top left corner, but the sensors inside are highlighted with black, which adds a pop to the back. We love the small bolt-in flash (the flash is bolt-shaped) – it is tiny but so cool that it deserves chef’s kisses. 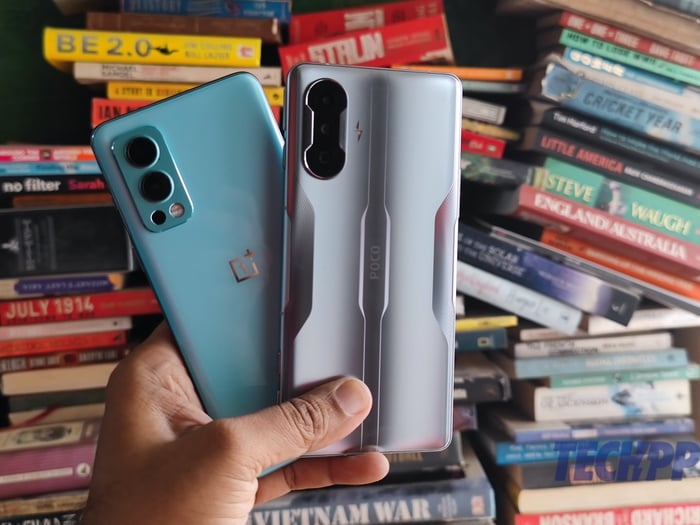 The sides of regular phones are often plain and boring that only house some run-of-the-mill features and functions, but the Poco F3 GT is no regular phone. Instead, the phone’s sides are a blend of flat and curved, giving you a better grip in both landscape and portrait mode. It especially makes it much easier to handle the phone while gaming. And to take your gaming experience up another notch on the phone, Poco has added two sliders on the right side. These sliders, when pushed, pop up two triggers that can be used as physical controls for hardcore gaming sessions. In order to have the flat sides again, you can simply push the sliders back in. The phone also has L-shaped stereo speakers, another design anomaly that made it not-so-ordinary looking. It may be glass, but the phone feels quite solid and comes with a splashproof IP53 rating. The Poco F3 GT is bigger than the Nord 2 thanks to a bigger display and battery, but the smartphone is almost just as slim as the Nord 2, which is a pleasant surprise.

Between the Nord 2 and the Poco F3 GT, we think the Poco F3 GT is the clear winner in terms of sheer design. It not only brings the head-turning-ly, eye-popping-ly, jaw-dropping-ly good design to the table, but its design elements also add value to the overall smartphone experience, which is a major tick for us. 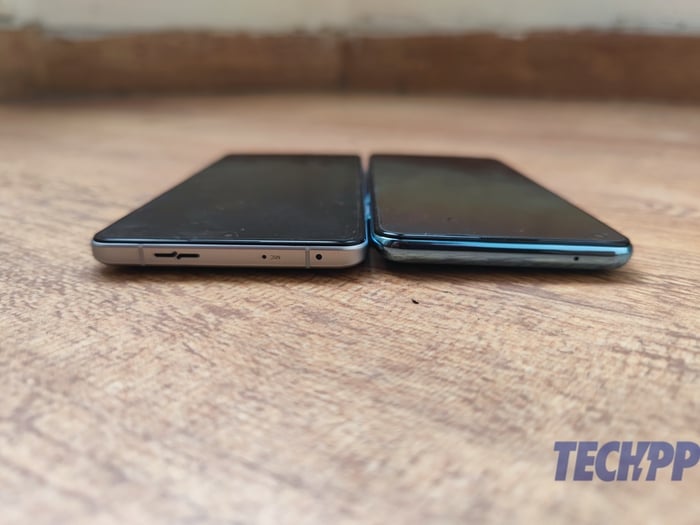 The two phones may be poles apart in terms of looks, but they are not so different on the inside, well, at least in terms of processors. The MediaTek Dimensity 1200 processor powers both the Nord 2 and the Poco F3 GT, but the Nord 2 comes with a Dimensity 1200 AI chipset which OnePlus created in collaboration with MediaTek exclusively for the Nord 2. The AI suffix adds to the better image processing performance and some other tasks, as per OnePlus. These two Dimensity 1200s are paired with 6 GB RAM and 128 GB storage. Both phones have an 8 GB/ 128 GB variant as well, but it is only the Nord 2 that has a 12 GB/ 256 GB version as well. Unfortunately, neither comes with an expandable memory option. So we are calling this one a tie unless you are looking for 12 GB variants.

Performance: Scoring on display and gaming 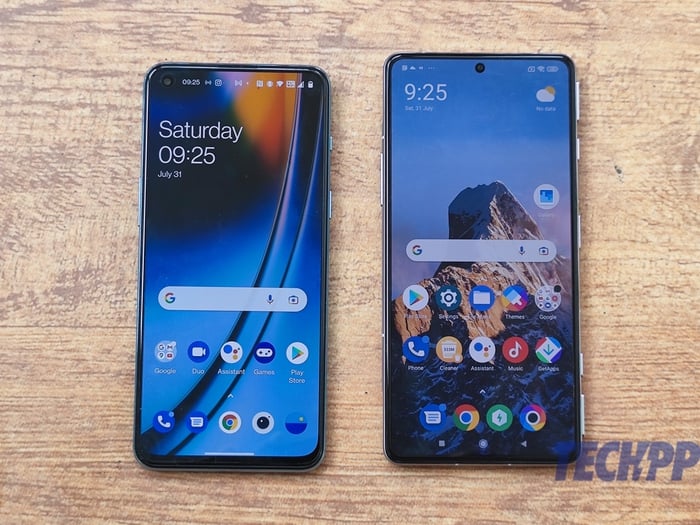 The two phones run smoothly through daily chores. Everyday activities like social media scrolling, multi-tasking, calling, texting are as smooth sailing as it gets on both phones. We found the physical fingerprint scanner on the Poco F3 GT to be swifter than the in-display scanner on the Nord 2. That said, the Alert slider on the Nord 2 is a convenient addition to change sound profiles.

Their performance remains neck to neck in the casual gaming zone as well, but in the high-end gaming zone, that Poco F3 GT edges out the Nord 2 a little. Because the two phones run on similar (read same) chipset, there is little to no difference in the actual gaming experience of the two devices. Still, the flat sides and the physical control buttons on the Poco F3 GT make it more of a gaming device as compared to the Nord 2. Furthermore, the lead of the Poco F3 GT gets even bigger with its display. The OnePlus Nord 2 brings a 6.43-inch full HD+ fluid AMOLED display with a 90 Hz refresh rate to the table, while the Poco F3 GT sports a bigger, 6.67 inch 10-bit Turbo full HD+ AMOLED display with an even higher 120 Hz refresh rate. This means not only does the F3 GT have a bigger display, but it is potentially smoother too with games that support a high refresh rate, making it more ideal for gaming as opposed to the one on the Nord 2. 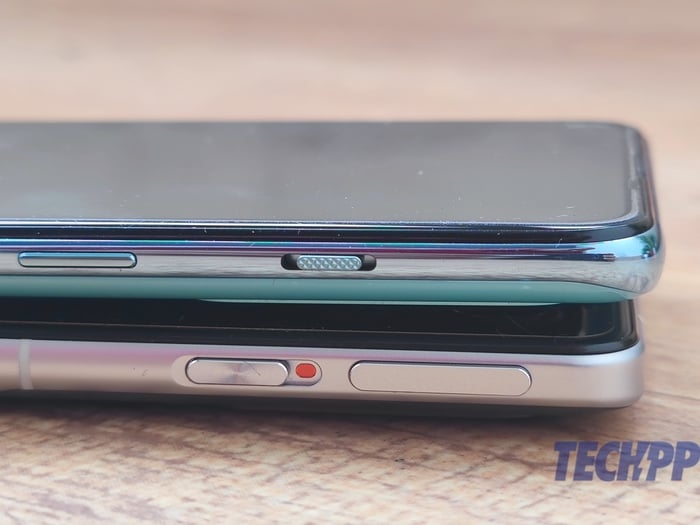 Both the Nord 2 and F3 GT come with stereo speakers, and the audio output on both is pretty good. However, because the Poco F3 Gt has one speaker at the base and one at the top, its output felt superior (and more surround-y) to the Nord that has one speaker on the base and uses the earpiece as a second speaker. Unfortunately, neither comes with a 3.5 mm audio jack.

The call quality on both smartphones is the same, i.e., good. We did not face any abrupt call drop issues. Both the phones come with support for 5G, which makes them future-proof. While the two phones are awfully close in this round, the Poco F3 GT is just slightly ahead in the game with a better display and overall gaming experience.

Cameras: Defying the megapixel gap at back, making it count in front 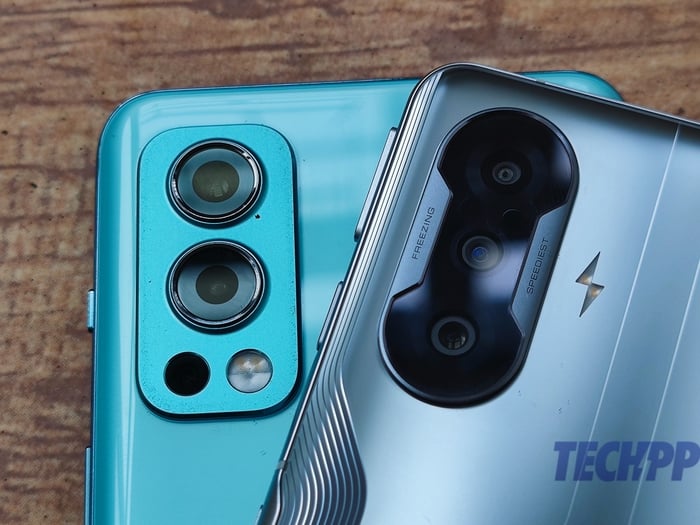 It may be looking like a one-sided battle so far, but (spoiler alert) the OnePlus Nord 2 makes up lost ground in the camera department. Both Nord 2 and the Poco F3 GT come with triple camera setups on the back with 8-megapixel ultrawide and 2-megapixel (monochrome on the Nord 2 and macro on Poco F3 GT) secondary sensors in supporting roles.

That said, there is a substantial megapixel difference between their main sensors, with the Nord 2 sporting a 50 megapixel Sony IMX766 sensor while the Poco F3 GT comes with a 64-megapixel sensor. This may again seem like it is Poco’s war to win, but the Nord 2 actually takes this one home. No, the F3 GT is not a bad shooter. It actually delivers some really decent pictures in well-lit conditions, albeit a little over-saturated. The Nord 2, on the other hand, nails both details and colors as it produces more realistic colors. The low light performance of the Nord 2 was also much better than that of the F3 GT, which churned out some noisy low light images. The Nord 2 maintained this edge in the video department as well. We suspect the OIS on the Nord 2 made a difference here – the Poco F3 GT has no OIS.

On the front, the Poco F3 GT has a 16-megapixel sensor, while the Nord 2 brings a 32-megapixel shooter (no dual selfie cameras here, unlike the OG Nord). While both phones can capture selfies good enough for your social media feed, the difference between the megapixel count comes forth in terms of detail, although the Poco F3 GT seems to handle portrait shots better than the Nord 2. With better performance in both front and rear camera zones, the OnePlus Nord 2 takes the camera round home.

UI: A fresh breath of… Oxygen for U(and)I

The Nord 2 and the Poco F3 GT are miles away from each other when it comes to software. One is clean, simple, and very close to stock Android while the other is loaded with features. Both phones run on Android 11 out of the box, but the Nord 2 is topped with OxygenOS, while the Poco F3 GT comes with a layer of MIUI 12.5. Now, MIUI 12.5 is the most decluttered and clean version of MIUI from Xiaomi. It comes loaded with features minus the intrusive ads. But the OnePlus Nord 2 is much more clean and uncomplicated. So while some might prefer the extensive features that the Poco F3 GT brings, we prefer the simpler OxygenOS vibes.

Battery Life: Nothing warped here… except for the charging speed! 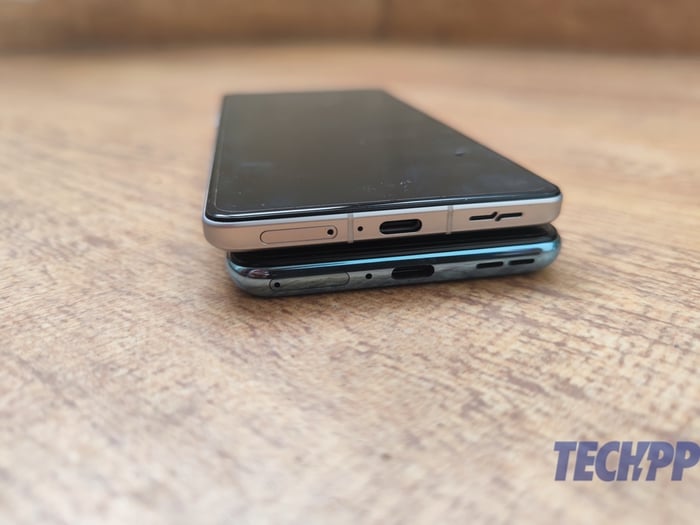 Both phones come with big batteries paired with extremely fast charge support. The Nord 2 brings a 4,500 mAh battery with 65W Warp Charge support, while there is a 5,065 mAh battery on the Poco F3 GT paired with a 67W charger – and both phones. The two phones can easily see off a day of moderate usage on a single charge with maxed-out refresh rates. That said, the Poco F3 GT can last slightly longer, which might surprise some when you consider that the Nord 2 has a slightly smaller display with a lower refresh rate. The two phones can go from zero to 100 percent within 45 minutes, although the Nord 2 charges a tad faster and is closer to forty minutes. This one is a very close round, but we are giving it to the Poco F3 GT because of the bigger battery.

Price: Not much between the two 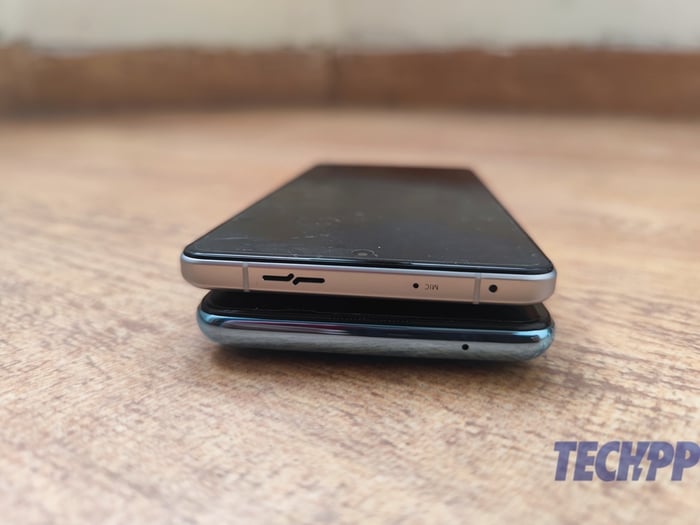 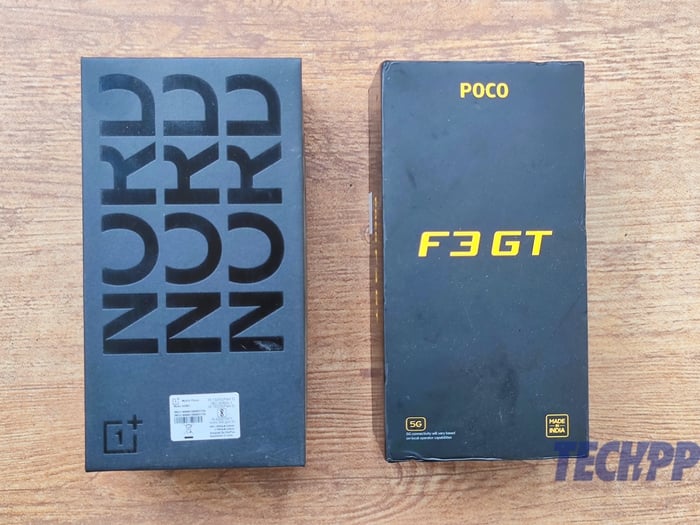 This has been one tough fight between two really powerful smartphones, and the results reflect it. That said, we think. The Poco F3 GT is the clear winner of this battle as it has won four rounds out of seven, with one round being tied. But this does not mean that the OnePlus Nord 2 is not worthy of consideration. The phone wins major rounds like camera and UI and only gets marginally left behind in areas like performance and battery. Both phones are likely to meet all your expectations when it comes to premium mid-segment performance. In the end, it basically depends on what you are seeking from a phone. If it is better camera performance and cleaner UI, the Nord 2 is the phone for you, but if eye-catchy design, better gaming performance, bigger display, and battery are what you are searching for, then the Poco F3 GT would be the one for you.

Was this article helpful?
YesNo
TechPP is supported by our audience. We may earn affiliate commissions from buying links on this site.
Read Next
Redmi Note 12 Pro+ vs Pixel 6a: Comparison
#comparison #Face Off #OnePlus Nord 2 #Poco F3 GT