Fitness trackers are a common sight these days! And so are the brands manufacturing them.

As such, while certain players have managed to establish themselves under specific price segments over the years, others aim to bring a chunk of those offerings at a considerably lower price point. 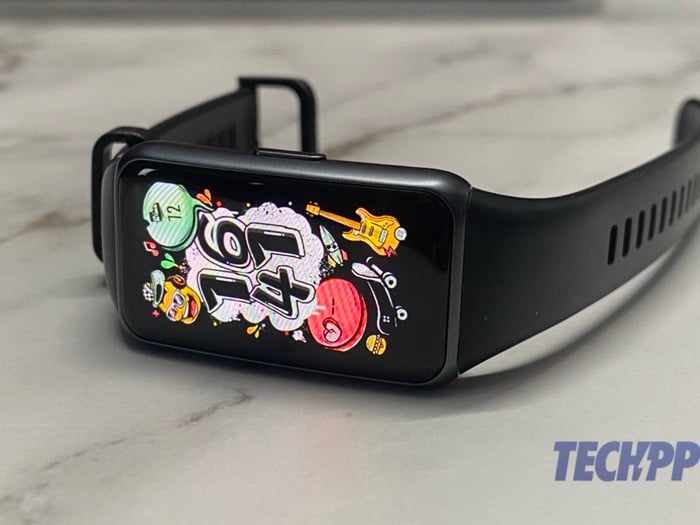 Huawei happens to be one such brand in this regard, with various fitness trackers — both smartwatches and smart bands — under different price brackets. And its latest offering, the Huawei Band 6, corroborates the same to a great degree.

It’s essentially a fitness band with a relatively bigger display (than traditional fitness bands), which brings features such as all-day SpO2 monitoring, 24-hour heart rate, and sleep monitoring at a lower price point. As a result, it takes on the offerings from the likes of Xiaomi, OnePlus, Amazfit, etc.

But does it have what it takes to be the best budget fitness tracker? Follow along as we discuss our experience with it in this Huawei Band 6 review to help you decide if it can be the next fitness tracker on your wrist.

Right off the bat, the Huawei Band 6 looks like a smaller (trimmed-down) version of the Huawei Watch Fit (available globally), which makes it a perfect blend of both a fitness band and a smartwatch. It features a 43mm polymer case that comes in at 10.9mm thick and is available in two colorways: dark gray and gold.

Overall, the build of this case feels solid and premium to touch. And despite being on the bigger side, it doesn’t feel bulky when worn and sits around the wrist comfortably. As for the build-essentials, the Huawei band comes with up to 5ATM (50 meters) water resistance, which means you can easily take it in the pool to track your activity without worrying about damaging it. 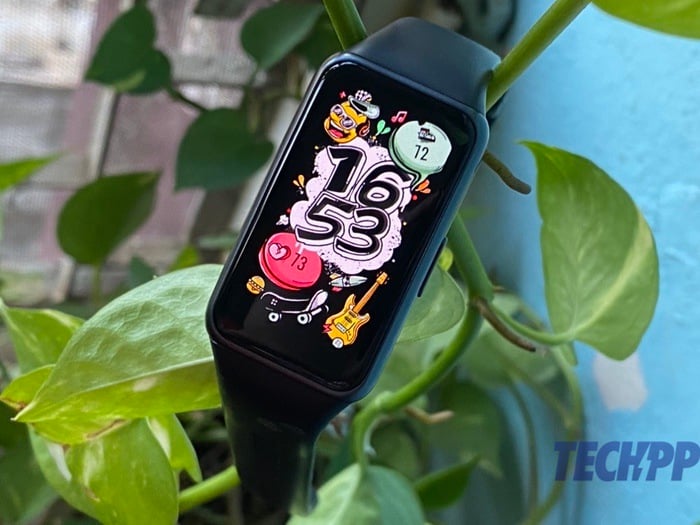 On its right, the case has a multi-functional button that lets you turn on the screen, access the menu, and return back to the home screen. Its placement seems appropriate, and because it isn’t flush with the case’s body, you get solid tactile feedback.

Moving to the back, the Band 6 has a matte plastic finish housing the essential sensors and charging connectors. While this back panel sits well on the wrist, we experienced that the raised sensor grid it incorporates often leaves impressions on the wrist when worn for long hours. 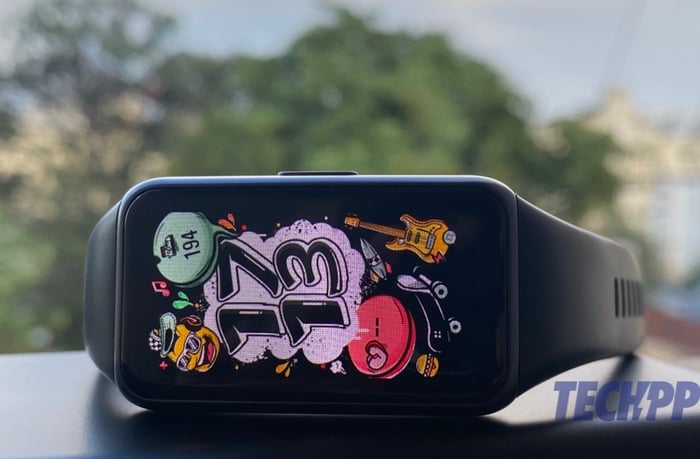 To speak of the key component in a fitness tracker—display—the Huawei Band 6 sports a 1.47-inch (194 x 368 pixels) AMOLED panel. It’s a colored display that extends to the edges and offers a clean and legible viewing experience.

As we mentioned earlier, the band looks like a miniaturized version of the Huawei Watch Fit, and therefore, it has several advantages. In our opinion, having a tall aspect ratio makes the band’s display significantly more useful, as it can pack in a lot more information at the same time without cluttering it up. As a result, you can clearly read the text or readings for different activities you’re tracking, not to mention, it also makes it easy to read notifications (messages and email) from your connected smartphone.

Likewise, since the display is AMOLED, you get a good (bright and vibrant) viewing experience. Plus, outdoor visibility is also pretty good, which means you can easily keep track of your outdoor runs and other activity records on the move. 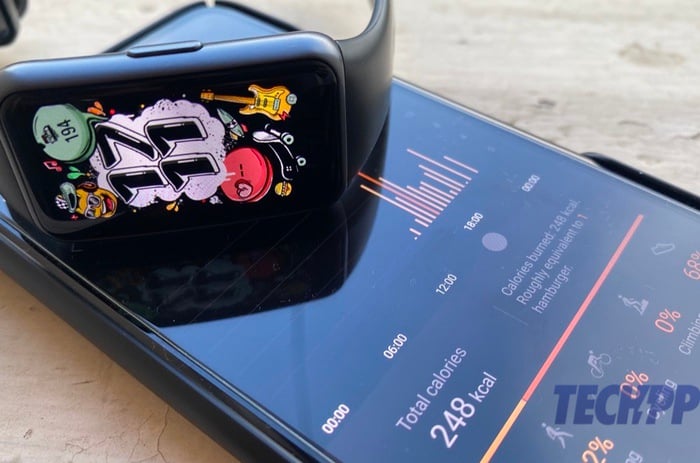 In terms of usability, the touch response on the screen feels intuitive and doesn’t have any kind of input lag. Although the band lacks an always-on mode, the raise-to-wake functionality works well enough most of the time.

To sum up Band 6’s display, we’ll go so far as to say that Huawei has done a great job with its latest offering, so much so that it wouldn’t be wrong to say that it beats the display on pretty much all fitness trackers in this range.

Being a fitness band, the major highlight of the Huawei Band 6 is its fitness and health-tracking capabilities, for which it offers a bunch of different modes and functionalities.

Starting with the basics, you get metrics for different kinds of activities such as steps, calories burnt, heart rate, blood oxygen (SpO2), stress, and sleep. During our testing, wherein we used the Band 6 alongside a Fitbit Inspire HR (and Charge 3, on a few occasions), we found the steps count on the device to be slightly off. It registered more steps during walks and failed to keep up with actual step counts during runs. However, having said that, we’d like to point out that these recordings aren’t totally inaccurate and can do the job for most users in an everyday scenario. 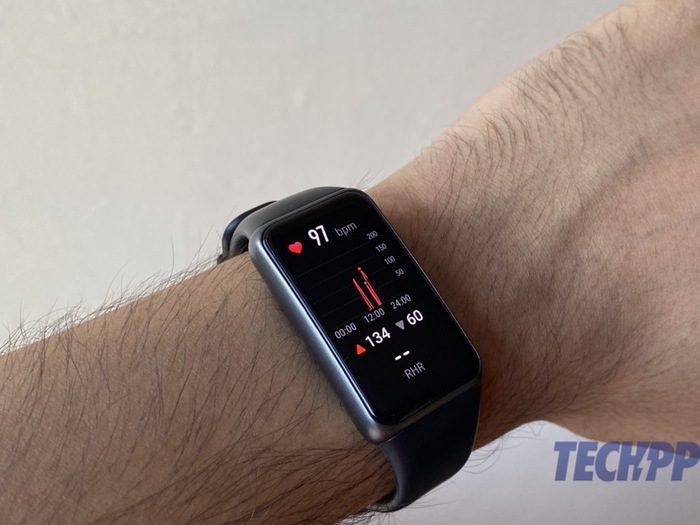 When it comes to heart-rate monitoring, we noticed a spike in the readings pretty much every time on Band 6, with the actual heart rate reading differing by around 8-10 bpm. Surprisingly though, the readings recorded during workouts were close to that on other trackers, and we didn’t encounter any consistency issues in this regard.

Activity tracking is also very much on point on the Huawei Band 6. It features different modes under the menu, which you can select accordingly to start tracking an activity. Or, you can simply use the automatic workout detection mode to allow the band to identify your workouts automatically. Our experience with automatic workout detection was satisfactory, as the band managed to identify most workouts by itself correctly.

Moving on to the blood oxygen tracking, we found the ratings recorded by the band to be accurate almost all the time: the mechanism worked seamlessly and didn’t throw any errors, which is rare on fitness trackers with SpO2 tracking at this price range. 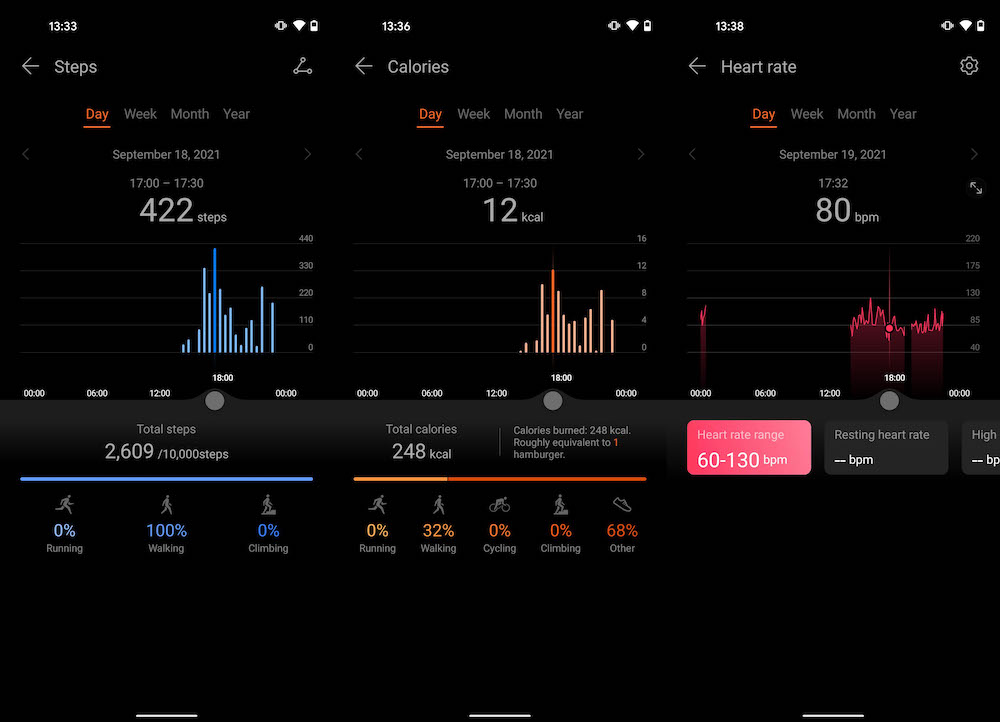 However, when it came to stress-tracking, we weren’t really impressed. And to be fair to Huawei’s effort, this functionality feels more like a gimmick at this point than anything else. As a matter of fact, this applies to pretty much all fitness trackers offering this functionality, as there isn’t a standardized way to measure stress, which makes it hard to determine which stress measuring approach is the most effective or accurate.

In line with these complaints, another problem we experienced with the Huawei Band 6 was with regard to the pairing process. Just like any other fitness tracker, Band 6 also connects over Bluetooth and has a dedicated companion app to keep a record of all your health and fitness data. However, the experience on offer here is inadequate, to say the least, as getting the band to pair with a smartphone and then have it visible on the Huawei Health app was very frustrating and annoying.

Not just that, though, at times when the device did pair successfully, data syncing issues took over the charge of hampering the experience. On multiple occasions during our time with Band 6, we noticed that it failed to sync data correctly with the app and required multiple refreshes to get the same data (as on the band) to show up in the Health app.

But besides those issues, the Health app offers enough in-depth look at your different stats over the day, week, month, or year, so you can use that data to your advantage to stay on top of your goals. 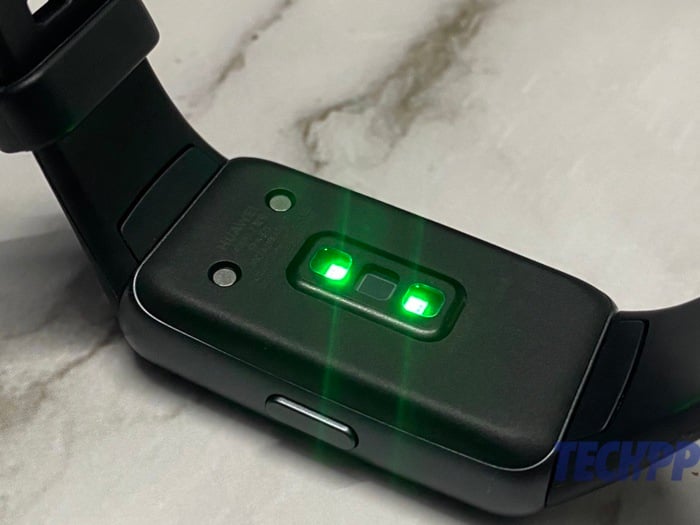 In terms of features, the Huawei Band 6 has you covered in terms of the staple fitness tracker features, along with a few additional ones. For starters, you get the ability to view notifications from your smartphone right on your wrist. And the sizeable screen size ensures viewing them isn’t a problem.

Similarly, the band also lacks a built-in GPS. As a result, it relies on your smartphone’s GPS to map out your routes and record runs. So if you’re looking to buy a tracker primarily to track your runs, this is something you need to take into account. 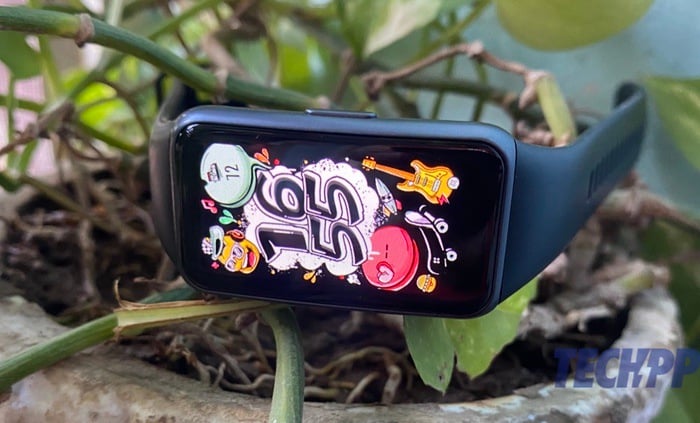 Besides that, though, the Huawei Band 6 comes with a bunch of bundled apps, such as weather, timer, stopwatch, alarm, and flashlight, which add to the experience. Moreover, you get the ability to control music on your smartphone through the band and a Find Phone app that buzzes the connected phone to help you locate it.

Of course, Huawei bundles a decent collection of watch faces—both free and paid—on its store so you can customize its appearance to your preference. 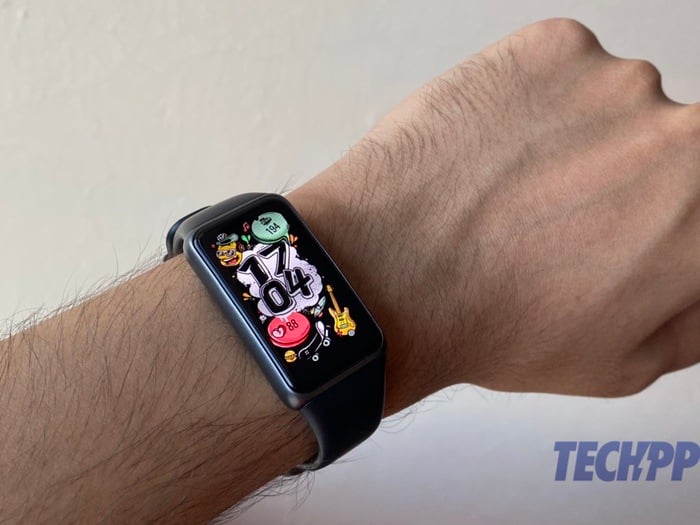 Battery life on the Huawei Band 6 is impressive. According to the company, the band can easily last up to 14 days on a single charge. However, during our testing, which included all-day activity tracking (except for sleep tracking), it lasted us 11-12 days on a charge. So, of course, your mileage may vary depending on how you use the tracker.

When compared to some of the other fitness trackers, this is really impressive, as most active-tracking bands run out of juice in a week or so. In terms of charging, the Band 6 employs a two-pin thimble, which attaches magnetically on its back. In our opinion, this isn’t the most secure connection, and you risk the chances of accidentally knocking the charger off if it isn’t positioned on a surface properly.

As for the charging time, the Band 6 charger is pretty quick (from fitness tracker standards) and takes around an hour to charge the battery from zero to full. 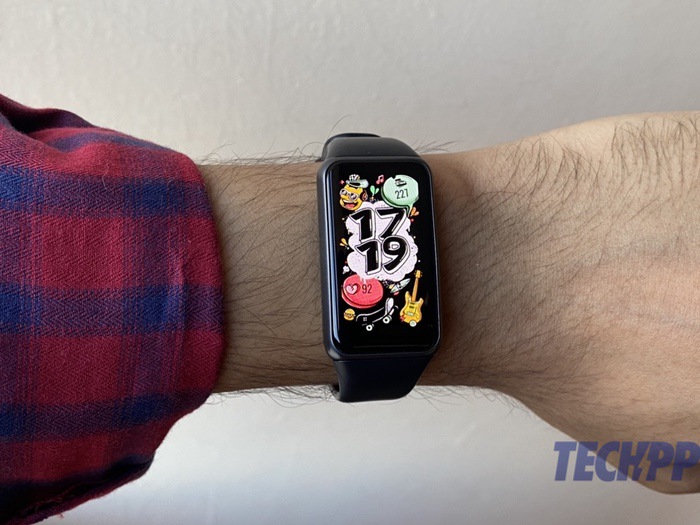 For a price of Rs 3990, the Huawei Band 6 is a solid offering. It’s got an overall good build quality with a fairly large screen estate that efficiently displays all information and a generally accurate health and activity monitoring to help you stay on top of your goals. So if you’re looking for a fitness tracker with all the essential tracking functionality and good battery life, the Band 6 is a good option.

However, if you want a tracker with built-in GPS, interactive notifications, or more accurate tracking, you can check out other options in the lower or higher price segment.

Review Overview
Was this article helpful?
YesNo
TechPP is supported by our audience. We may earn affiliate commissions from buying links on this site.
Read Next
Skullcandy Mod Review: Betting on doing the basics well
#Huawei #huawei band 6 #review