We finally have an

The word mini is generally used to denote something that is a smaller version of a product or service. And with the size reduction inevitably comes a perception of being a little “lesser” than the “real” thing. The iPad mini has had to suffer from this perception as well. While its spec sheet has never been inferior to the “normal” (namely, non-Pro and Air) iPads, it was always seen as a slightly inferior iPad because it had a smaller display and a smaller form factor. It was not a “real” iPad, just a shrunk version of the original, even if its specs and performance were similar to that of the “real” iPad. 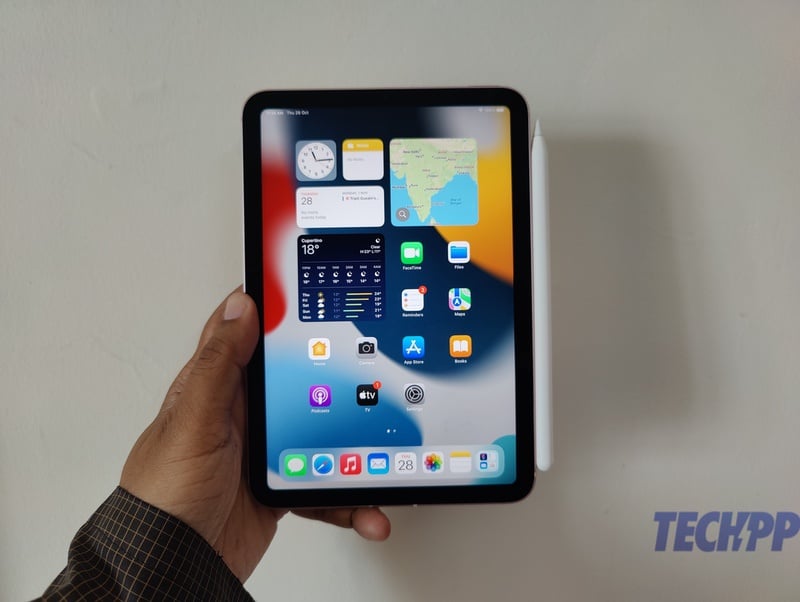 The similarity to the iPad Air (4th generation) strikes you the moment you see the iPad mini. It has the same smaller bezels and straight sides look that the iPad Air has. In addition, the round home button in earlier iPad mini models is no longer there. Adding to the similarity is the charging panel on the right side of the device for charging the Apple Pencil (2nd generation). The volume buttons are on the top, as is the power and display button, which also doubles up as a fingerprint scanner (more iPad Air feels)! Completing the Air-y feeling is the presence of a USB Type C port at the base (yay) and the total absence of a 3.5 mm audio jack (nay).

The removal of the home button has allowed Apple to squeeze in more display into the new iPad mini. So even though it is actually slightly shorter than the previous one – 195.4 mm against 203.2 mm – it actually has a bigger display. While iPad mini devices have had 7.9-inch displays in the past, the new one has an 8.3-inch one. And while it is slightly thicker (6.3 mm to 6.1 mm), it is still lighter than the previous iPad mini – 195 grams as compared to 203 grams.

All of which gives it the look of a slightly shrunk iPad Air. That’s a very good look. The straight sides give it a somewhat box-y and reassuringly solid appearance. It also gets new shades – space grey, starlight, pink and purple – all of which look very classy. We got the pink one incidentally. The slight decrease in height and weight also means that this is the most compact iPad mini ever. So those with slightly large hands can actually hold it in one hand more easily than in the past. 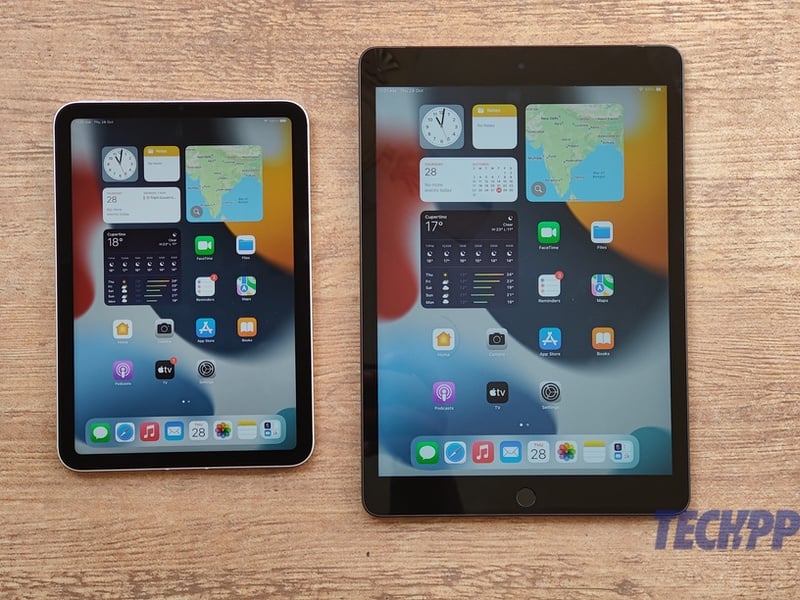 It is also perhaps the only iPad you do not have to sit down and use – you can use it easily while standing or walking. It is smaller than a hardcover edition of a bestseller and about the size of a slightly oversized diary – compact enough to fit into an overcoat pocket. Small wonder that Apple shows it on its home page as being held in one hand, almost like an oversized phone (remember the phablets?). And that actually makes a big difference, as we will explain later.

The most powerful non-Pro iPad?

It is not just the looks of the iPad mini that have been given an overhaul. In spec terms, it now moves firmly to the forefront of the non-Pro iPad model line. Yes, the pixel density remains 326 PPI as in the case of the previous iPad mini even though the resolution has been bumped up to 2266 x 1488px, and the brightness too remains steady at 500 nits. However, this is a liquid retina display, a step up from the retina display on the previous iPad mini and the current iPad. Even the cameras have been upgraded – a 12-megapixel rear camera as well as a 12-megapixel ultrawide front camera. 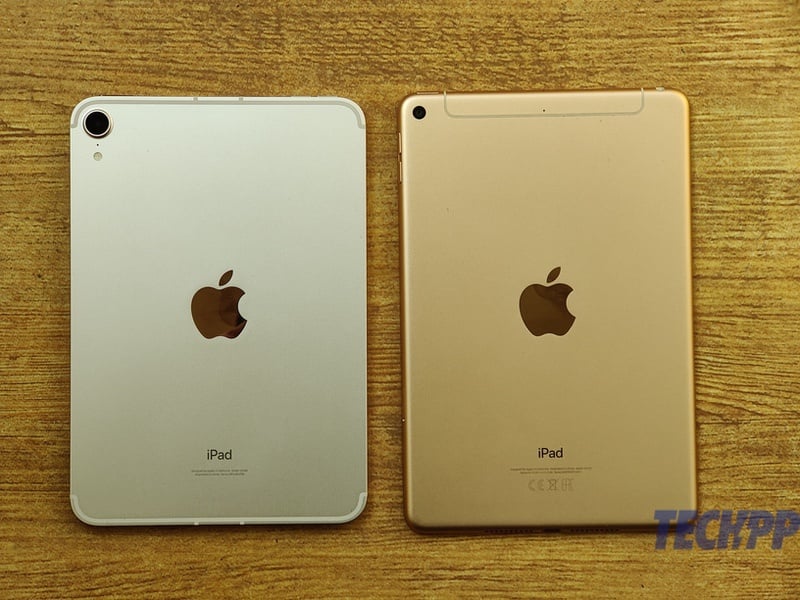 It comes with the A15 Bionic chip with a neural engine, similar to the one that powers the iPhone 13 series, a level above the A14 Bionic on the latest iPad Air (4th generation) and two levels above that of A13 on the new iPad (9th generation). That display has a resolution of 2266 x 1488px, giving it a pixel density of 326 PPI, and there are stereo speakers on the base of the tablet. This is 2021, so 5G has replaced 4G connectivity in the variant with a SIM card. You get a Wi-Fi-only variant as well, although the storage remains at 64 GB and 256 GB and is not expandable. The battery remains a very formidable ten hours.

All of which makes this iPad the closest thing we have seen to an (even larger) iPhone Pro Max in a while. 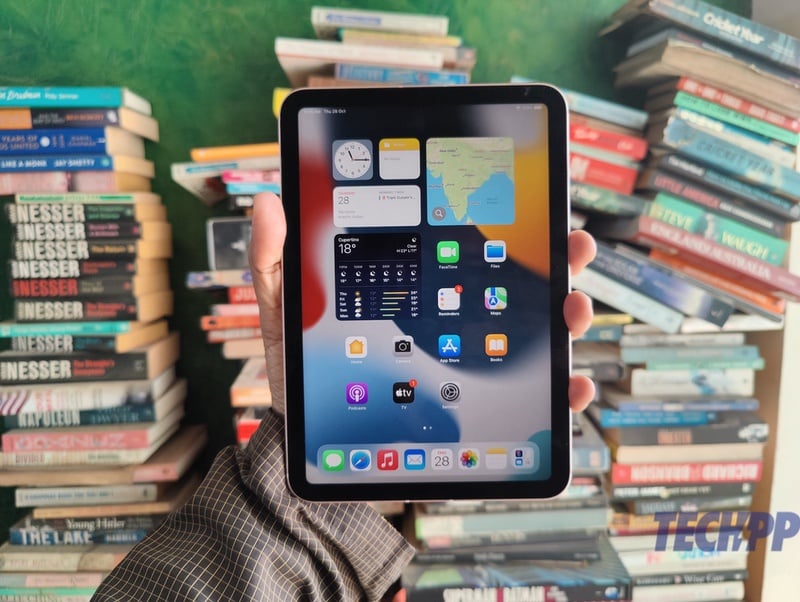 It is hardly surprising that the iPad mini turns in an outstanding performance with all that on board. No, you will not really be able to tell the difference between its performance and that of the latest iPad Air, but it is clearly miles ahead of the new iPad and the previous iPad mini. The very good speakers and display combination make it good for multimedia consumption, especially when you want something a bit bigger than your phone but not AS big as a regular iPad (say when you are standing in the Metro). Thanks to that processor. Without worrying about lags and crashes, you can run any game on it – be it Call of Duty or Genshin Impact.

Multitasking on the more notebook-like iPad OS works a treat, and well, this is an iPad, so normal apps like mail, social networks, and messaging work very smoothly on it.

However, the impact of the processor really hits you when you get into tasks like editing videos and images, which is basically the Pro zone. The iPad mini is very comfortable there. Yes, the lack of real estate, as compared to, say, the latest iPad Air, does strike you, but things go very smoothly indeed. While on the subject of images and videos, this is a good place to point out that the rear camera on the iPad mini is rather good, and can shoot 4K videos, while the ultrawide front camera comes with the Centre Stage feature, which keeps the subject in the frame, even when they move slightly away from the center. We did end up shooting and editing footage and images on it far more often than we have done on other iPads. 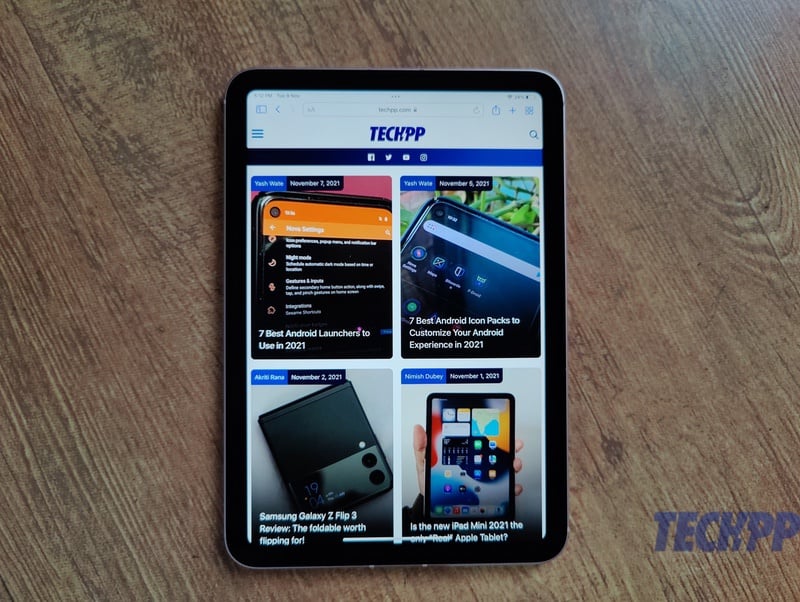 This iPad mini can also be paired with a Bluetooth keyboard to get into a notebook (the laptop type) mode of sorts. Unfortunately, there is no “keyboard cover” for it from Apple (the only iPad for which there isn’t), perhaps because the keys themselves would be too small, but for the record, that display is actually quite big enough for working on documents and tweaking presentations. Add support for the Apple Pencil (2nd generation) to the mix that 10-12 battery life, and the new iPad mini becomes an incredibly powerful handheld workhorse, and indeed an “iPad mini pro” in all but name.

The keyword here is “handheld.” And that takes us to the big matter of the relatively little size of the new iPad mini.

In our opinion, the 0.4 inches extra in the display do not make that much of a difference to the new iPad mini experience, but the smaller frame and design do make it even more, single-hand friendly. It was the only iPad that you could literally work on while moving or type on easily even when it is in portrait mode, just as you would on the phone, and the straight sides and slightly more petite frame just make that easier. 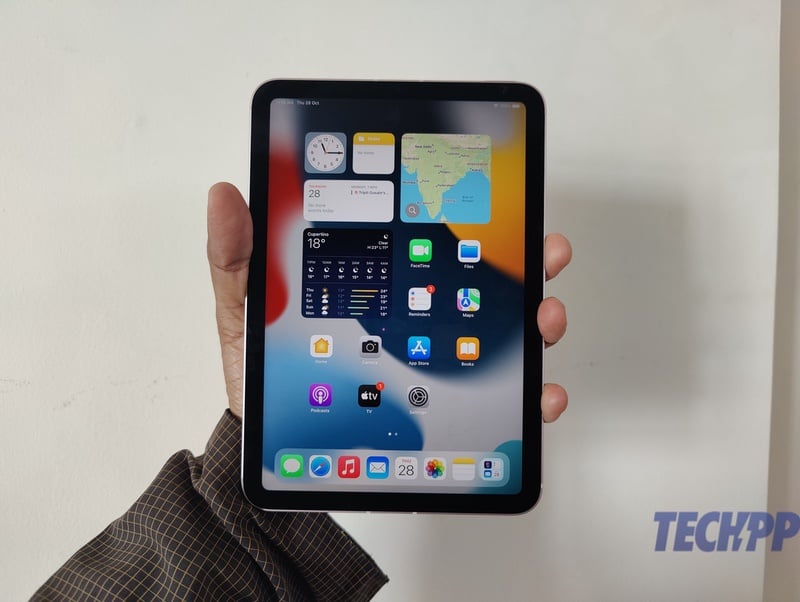 The fact that it is easier to hold also makes it one of the easiest to use tablets with the Apple Pencil. It can act as the perfect scribble pad for those who have to make notes or sketches on the move – folks like us writers and even engineers and doctors – because you can actually hold the tablet in one hand and write on it with the other, just as you would a real notepad.

The iPad mini is small enough to go inside a large pocket or a regular handbag. You do not need an elaborately large sleeve or bag to carry it, which just makes it that much easier to take out and use, almost like a slightly oversized phone. This is one of the two reasons we used its cameras far more often than we had done on other iPads (the cameras being better than we had seen on previous generations of the iPad mini was the other reason). The fact that your fingers can easily and quickly move across most of the parts of the display make this one of the best mobile gaming devices we have seen in recent times. Of course, you can simply use it as a digital book reader too. 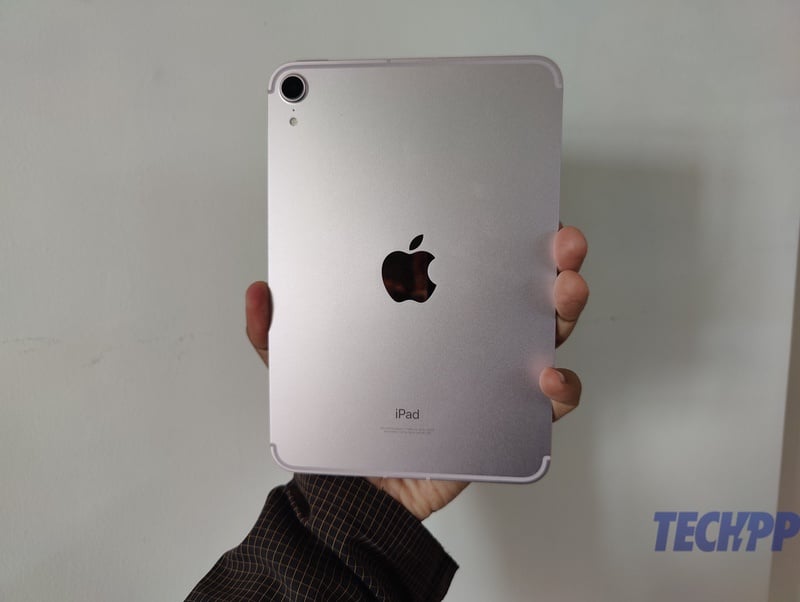 This is not to say that it is all smooth sailing for the new iPad mini. For example, its display is significantly smaller than even the base iPad, which has a 10.2-inch display, and this becomes very apparent when you are watching films and shows. And while the display is perfect for scribbling and rough drawings with the Apple Pencil, it might appear a little small for those who love to sketch.

The placement of the volume and display/power keys right on top of the tablet is also a bit odd, not least because the fingerprint scanner is in the power/display button. Moving your finger to the top of the tablet to unlock it or to change volume is not really intuitive, although we are sure one can get used to it. Having the fingerprint scanner on the side of the device would definitely have made the tablet easier to use, and the same goes for the volume buttons, although that would have meant lesser space for charging the Apple Pencil. 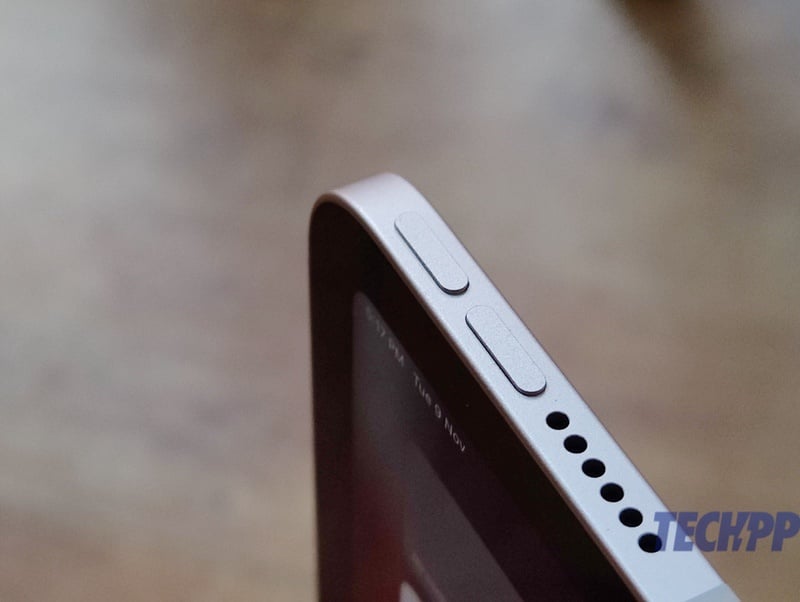 Speaking of which, while we love the support for Apple Pencil, the fact that it has to be charged by being placed on the right side of the tablet can make things a little awkward, especially if you are using the tablet while charging the Pencil. The Pencil also sometimes got detached from the iPad when we placed both in our crowded backpacks. The Apple Pencil is an awesome stylus, but it always seems to be in need of a better charging solution.

The default font settings were a little too tiny for comfortable reading. Yes, they can be tweaked to a larger size, but it just felt odd to do so, as iPads have always been comfortable to read on out of the box.

Worth purchasing? What about the bigger iPads? 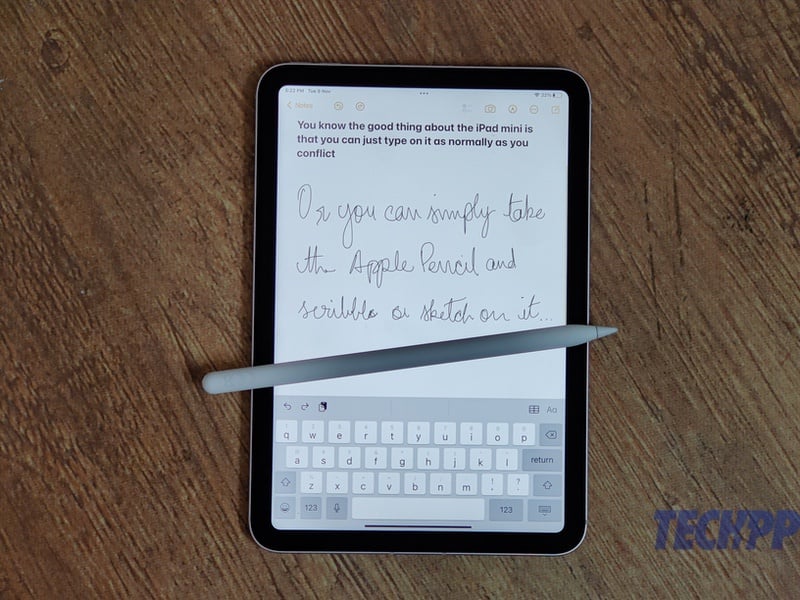 The iPad mini (6th generation) is available in Wi-Fi only variants of 64 GB for Rs 46,900 and 256 GB for Rs 60,900. The Wi-Fi and 5G version comes at Rs 60,900 for 64 GB and Rs 74,900 for 256 GB. This means its base version finds itself within touching distance of the latest iPad Air, which is now available from some stores at slightly less than Rs 50,000, whereas its top variant gets into the new iPad Pro zone. It is more powerful than the latest iPad Air but is unlikely to outmuscle the M1 chip-driven iPad Pro, and of course, both of those tablets have bigger displays, as indeed does the latest iPad.

To some, that might make the new iPad mini feel expensive. But this iPad mini’s audience is likely to be those looking for a tablet that is almost as convenient to carry and use as a phone without compromising on processing power. In that zone, the new iPad mini hits it totally out of the park, slotting in almost perfectly in the middle ground between the 6.7-inch display of the iPhone 13 Pro Max and the 10.2-inch display of the iPad. It gets you oodles of power, superb hardware, and ease of use, thanks to being the most portable iPad ever. We think Apple just maximized the iPad mini. This is a no-brainer if you want a powerful yet (overcoat) pocketable tablet.