The greatest foldable out there by some distance

When it comes to foldable phones, there is Samsung, and then there are others trying to make foldable smartphones. The Korean brand, as we wrote earlier, is a clear step ahead of the competition when it comes to devices that fold up. And with the Galaxy Z Fold 3 and the Galaxy Z Flip 3 (check its review here), it has just widened that gap. 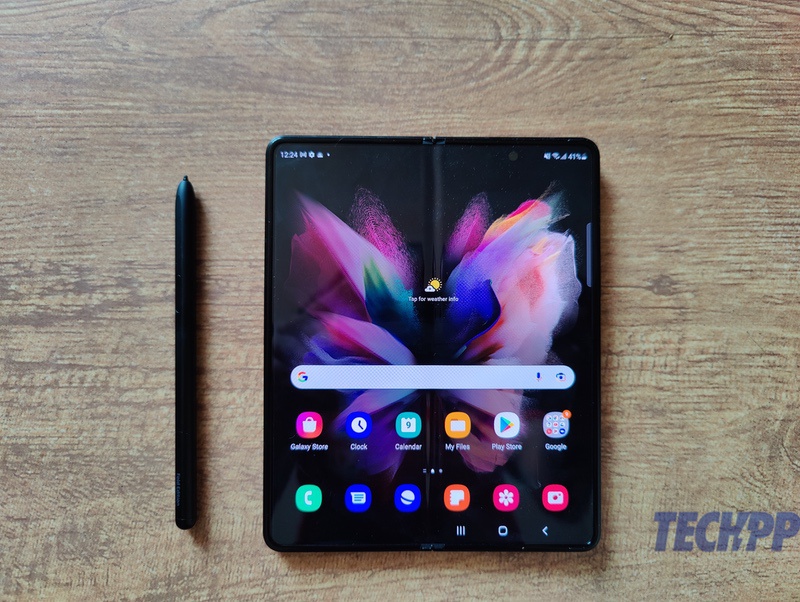 For, with these two devices, Samsung has moved the foldable phone a step closer to being a full-fledged productivity device rather than just technological quirks. The Galaxy Z Fold 3 is similar to the previous Fold devices – it’s a phone that folds out and becomes a tablet. And yet, it is different. Different enough for us to call it perhaps the most functional foldable phone ever. And this is not based on a few weeks with a review unit – we have been using the Galaxy Z Fold 3 for a few months now and have seen nothing to change our opinion.

The biggest attraction of the new Fold is, well, how it folds out. This had been a slightly iffy experience in earlier devices in the range, but with the Z Fold 3, Samsung has pretty much got that fixed. The Z Fold 3 opens smoothly (not too easily, there’s enough resistance to ensure that it does not simply open by a movement) and comes with none of the dainty, fragile feels of its predecessors. Yes, we would not suggest you treat it recklessly (that applies to all phones, actually), but you can treat it normally without worrying that a wrong turn – literally – will harm it. Relax, it will not. This Fold is made of sterner stuff – Gorilla Glass Victus on the front and back and an aluminum frame and an IPX8 rating which means it can easily survive a dunking in the water as well. We have been using it for months, and it seems as solid as ever – although getting a screen protector for it is a nightmare, do be careful with them displays.

The 7.6-inch Dynamic AMOLED, 1768 x 2208 display is a brilliant one and has a 120 Hz refresh rate. Yes, you can see a line across where it “folds” in the middle if the background is light, but it sort of fades out when things are darker. And well, while you will feel the crease of the Fold when you run your finger across it, it sort of blends more easily into the entire experience than it did in the past.

The experience of the Fold 3 in tablet form is excellent too. The display has a smooth feel to it, a far cry from the plasticky one of the first Fold (some folks peeled off the display, thinking it was a screen protector of sorts). What’s more, the transition from the external display to the internal one is incredibly smooth as well. That actually is the most magical element of the Z Fold 3 – simply unfolding it and seeing yourself move from a conventional phone display to something near a tablet. 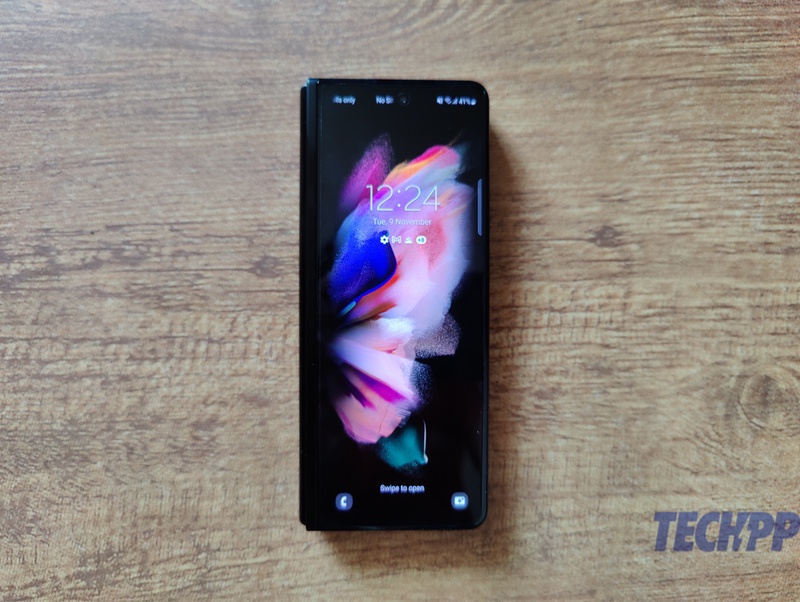 It is particularly brilliant when you watch a video, work on a detailed document, or scan a website. The stereo speakers just add to the immersive experience when you are gaming or watching a show. You can even half-open the Z Fold 3 and use it as a mini notebook of sorts – supported apps will make the lower part a keyboard and let the upper part be a display. Mind you, the utility of this is limited as the “display” is a little on the smaller side – we preferred folding out the device completely and typing!

Samsung’s addition of S Pen support is the perfect icing on the cake – no, you do not get the same level or class of functionality as on a Note (the S Pen is also a special Fold edition S Pen), but you get more than adequate freedom to scribble, sketch and mark, and that big display is a treat to work on. The Z Fold 3 unfolded is a thing of wonder. 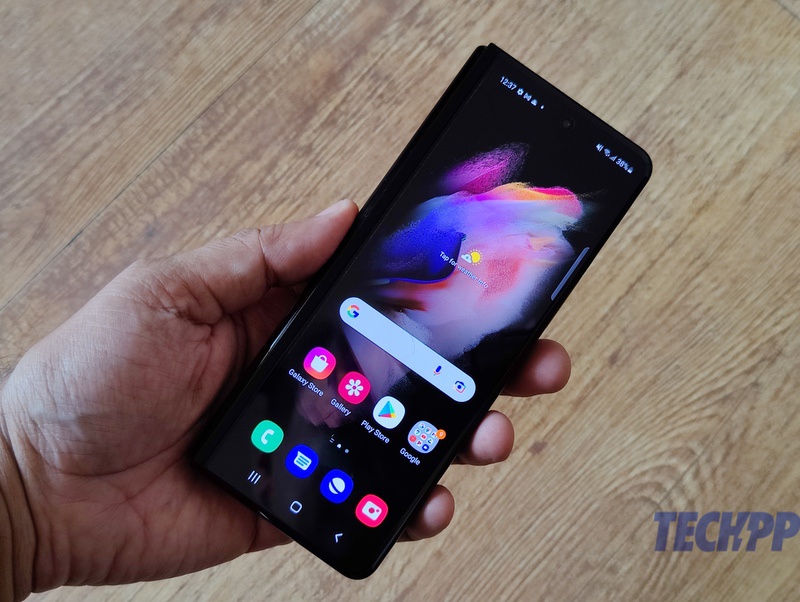 But if the folded out (opened) Galaxy Z Fold 3 is a thing of wonder, its folded-up avatar is a little underwhelming. The 6.2-inch Dynamic AMOLED display does look gorgeous, but its rather odd 2268 x 632 px resolution means that things look a little stretched and odd on it, although its 120 Hz refresh rate does make scrolling smooth and snappy. At 67.1 mm, the external display is also rather narrow – even something like the Redmi Note 10 Pro is 76.5 mm wide (the iPhone 13 is 71.5 mm wide) – and this means that typing on it can sometimes be a little trying. The S Pen does not work on the external display, but that is really not too much of a minus point.

Do not get us wrong – the external display of the Galaxy Z Fold 3 is not bad at all. It is very usable and literally gives you a proper phone’s eye view of everything. And as long as you are doing basic tasks like receiving and making calls, responding to the odd message (briefly), checking social networks, and doing some basic web browsing, it is more than enough. However, it just pales in comparison to the display within, so to speak. 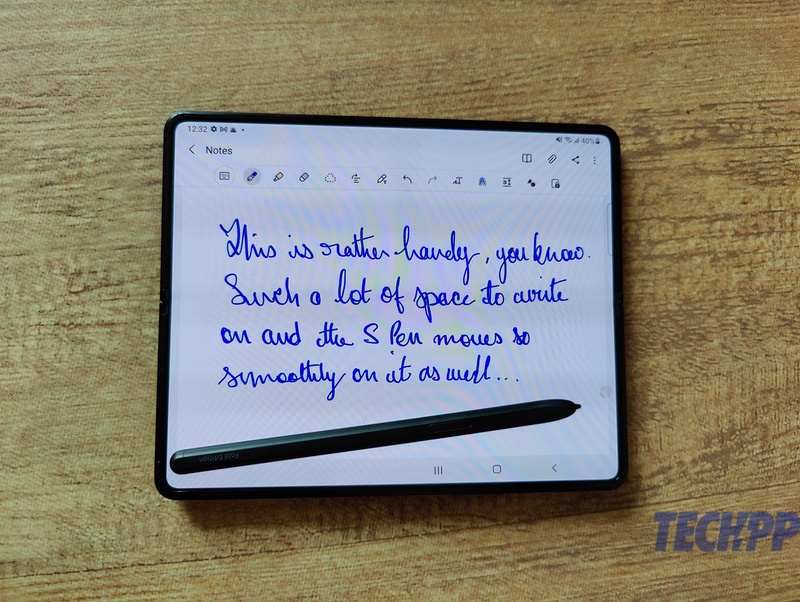 All of which combined with some terrific hardware – the device is driven by a Qualcomm Snapdragon 888 chip and comes with 12 GB RAM and storage variants of 128 GB and 256 GB. That is a recipe for a blisteringly brilliant performance, and whatever the Z Fold 3 lacks, it certainly is not speed. You can pretty much do anything from high-end gaming to video editing on it, and heck, shooting a photograph or video and then opening the device and editing it on that large display right away and uploading it to a site, complete with detailed captions, all from the same device, suddenly makes you understand the amazing potential the Galaxy Z Fold 3 has.

The number of use case scenarios is simply mind-boggling. Editors can literally get stories mailed to them and edit them in detail on the larger display with the S Pen or just by typing. Incidentally, you can sign forms pretty effortlessly with that stylus. You would have to purchase the S Pen separately, though – it is a special S Pen Fold Edition and can be purchased along with a special case for Rs 7500 (and we definitely recommend getting both, as getting screen protection for a foldable remains a challenge even now). You can also play a game on the larger display, fold the phone to take a call, and simply open it to resume playing. This is the closest thing we have had to a device that is a tablet and a phone in one simple package. And the level of hardware Samsung has packed into it, from flagship-level processors to lots of RAM and storage to bright, high refresh rate displays, means that it is a powerhouse with immense potential for productivity. The support for 5G means that it is future-proof to an extent as well.

…If not quite perfect 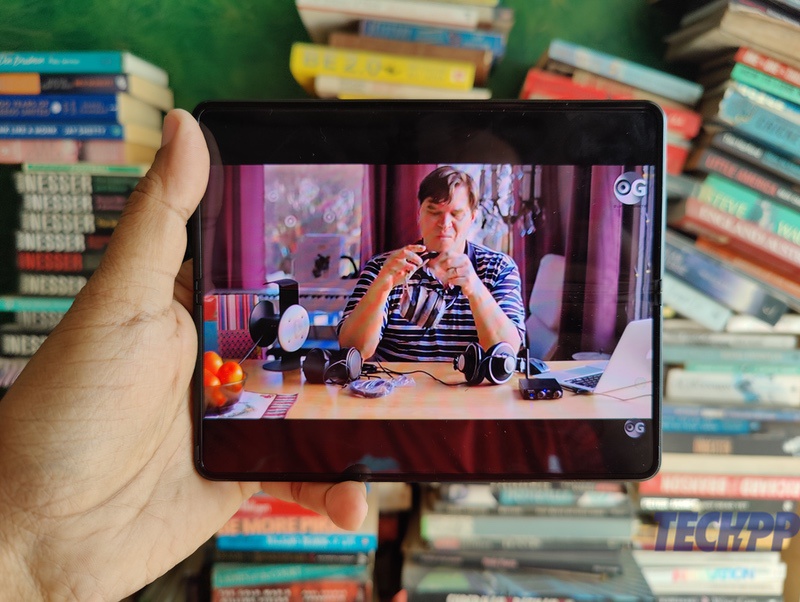 That is not to say that the Galaxy Z Fold 3 is perfect. It has its weak points. The biggest of these are the cameras. The rear array of three 12-megapixel cameras, one main, one telephoto, and one ultrawide, two of which come with OIS, is impressive enough and churns out some very good daytime shots but is not quite in the class of the shooters we have seen on the Galaxy S21 series in terms of overall performance – mind you, editing any content from them is sheer joy. In addition, the much-hyped under-display 4-megapixel selfie camera is impressively barely visible on the folded-out display but is barely usable, even for video calls – the 10-megapixel camera in front does a much better job in that department. The cameras are, in general, good enough for most users, that said. 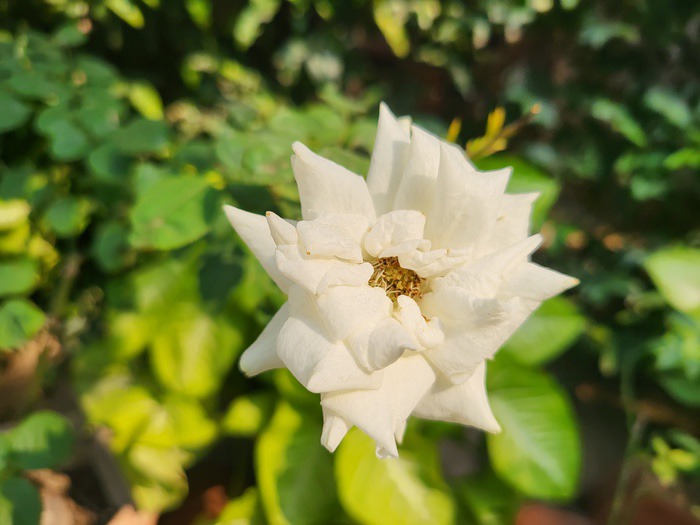 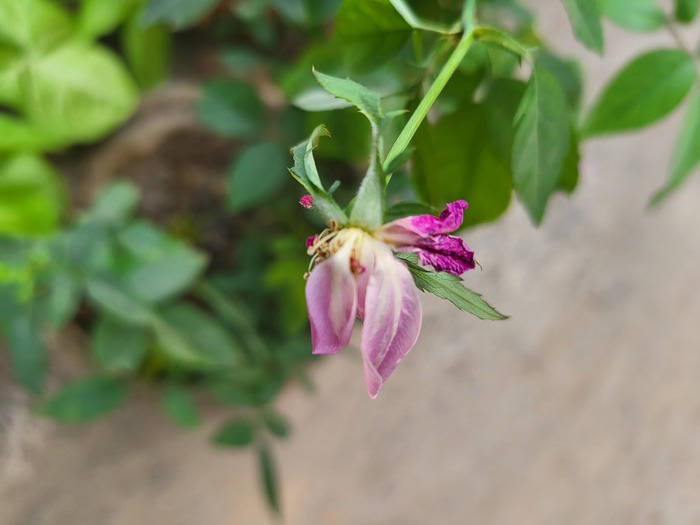 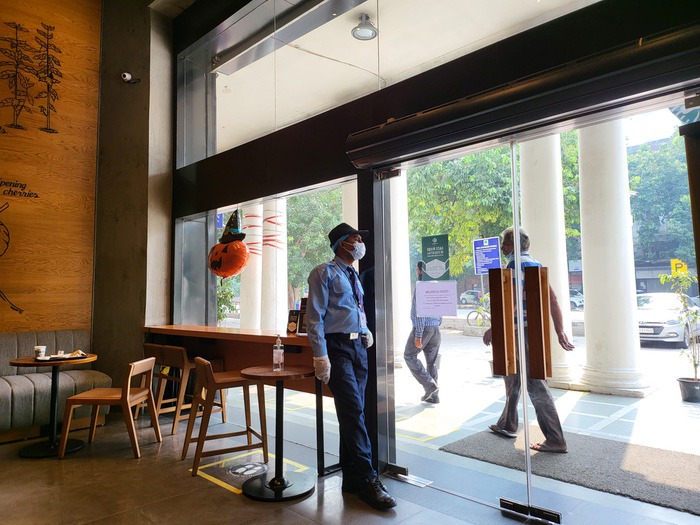 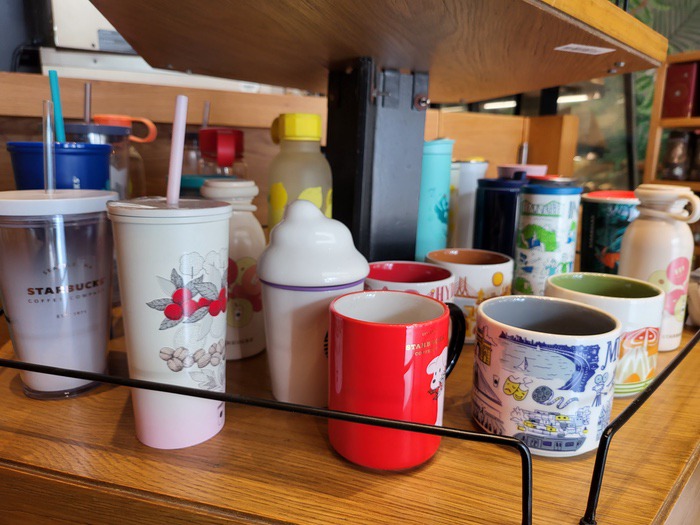 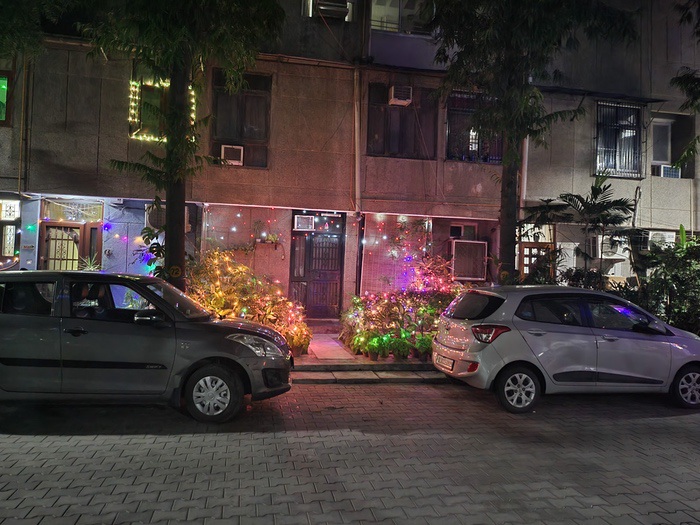 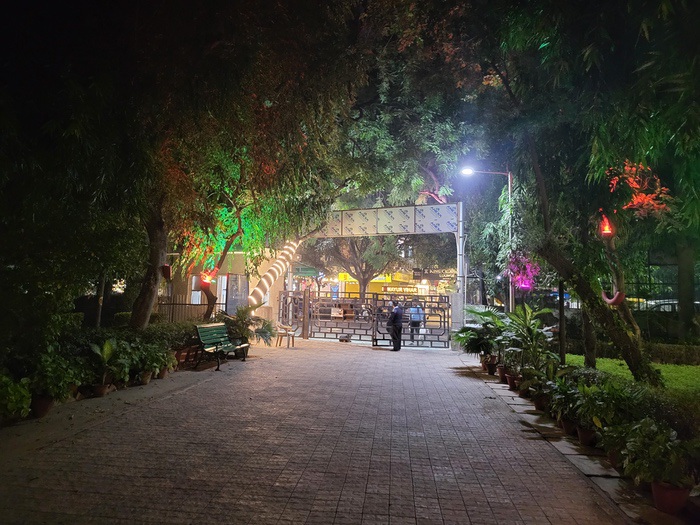 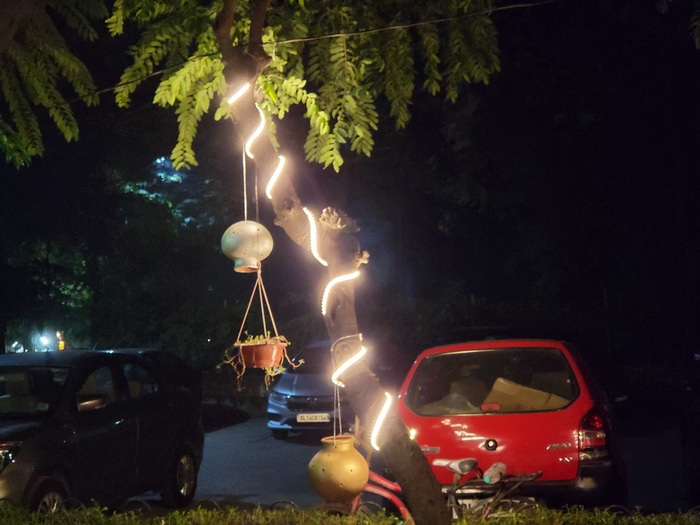 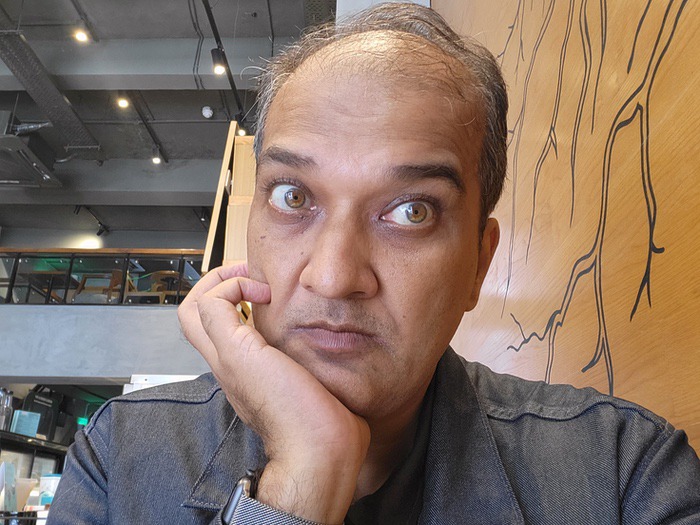 The same can be said for the battery, which is a tad on the smaller side at 4400 mAh and comes with support for 25W fast charging, although there is no charger in the box, in keeping with the latest premium flagship fashion in some quarters. If you are really using the device to its full potential, you will be about to just about see off a day of normal use. We would recommend turning down the refresh rates to get a bit more out of the battery. There is support for 11W wireless charging too, but a 25W charger can get this foldable from 0 to 100 in about an hour and forty minutes. A little sluggish by the “charge in half an hour” standards set by some Never Settlers, but really not too shabby. 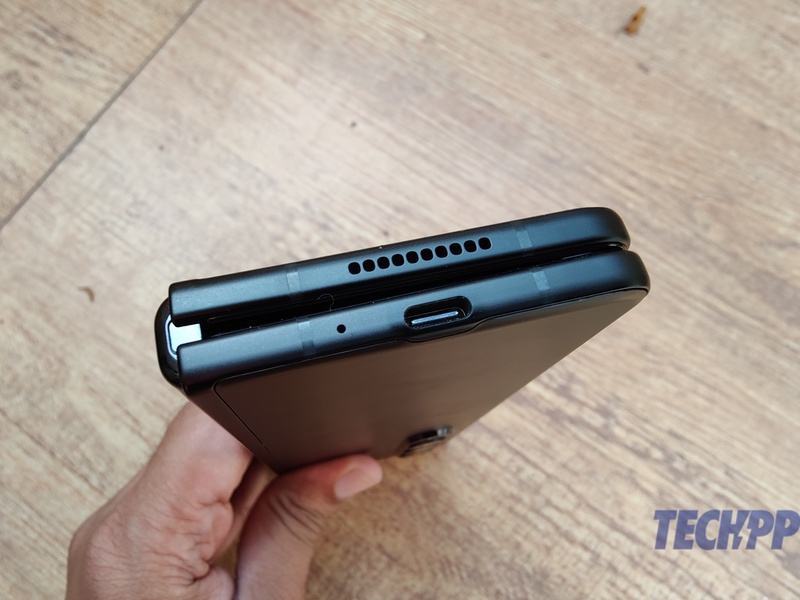 The software – the Fold runs on Samsung’s One UI on top of Android 11 – is a little bit of a work-in-progress, with not all apps really optimized to run properly on that larger display. You often end up with black bands above and below in videos and in many games.

That said, the games that DO occupy all the display (yep, Call of Duty does) look stunning. There are also cases of apps crashing when you move from the front display to the inner one and vice versa. But nothing on deal-breaking levels. Finally, there’s the design, which remains a little bulky and thick, and we do wish Samsung would figure out a way to close the Fold snugly – right now, there’s an ungainly gap between the upper and lower portion. You are unlikely to mind the design that much once you start using the device, though – such is its performance. The foldable design also means that getting display protectors and cases for the device is a problem (Samsung’s official case with a slot for the S-Pen is easily the best option, although its flappy front might put off some).

Expensive? Yes, but compared to what? There ain’t nothing like it! 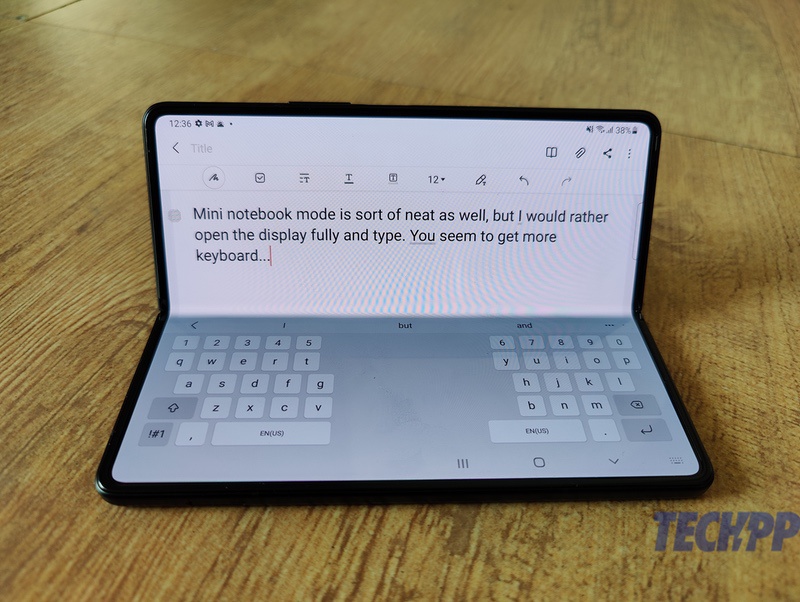 At Rs 1,49,999, the Samsung Galaxy Z Fold 3 starts at an extremely premium price. Of course, there will be those who will claim that you can get a flagship phone and a tablet in that price segment (indeed from Samsung itself) and still have change left over. But then comparing the Galaxy Z Fold 3 with normal flagship devices is unfair. For, this is a device that actually tries to do away with the need for having a phone AND a tablet and brings them into a single form factor. What’s more, it does so more successfully than any other foldable we have seen. And we have seen a few.

That is what makes the galaxy Z Fold 3 unique. In the current market, it is literally in a class of one. Its own predecessors are flimsy in comparison. Until now, the Fold series was mainly about form and flaunting. With the Galaxy Z Fold 3, Samsung has added functionality and solidity to the mix. In a big way. The Z Flip 3 might be the fun foldable, but the Z Fold 3 is simply the most useful and most usable foldable smartphone around. By some distance. Even months after its release.