The name pretty much says it all. Xiaomi has clearly bet heavily on charging speed to sell its first phone of 2022 in India – the Xiaomi 11i HyperCharge. While fast charging is rapidly becoming a part of even mid-segment smartphones in India, it is rare to see a brand bet so heavily on charging to push a device. Especially when the device is as fully-featured as the Xiaomi 11i HyperCharge. Does the move work? We have been using the phone for a while now and here are our thoughts. 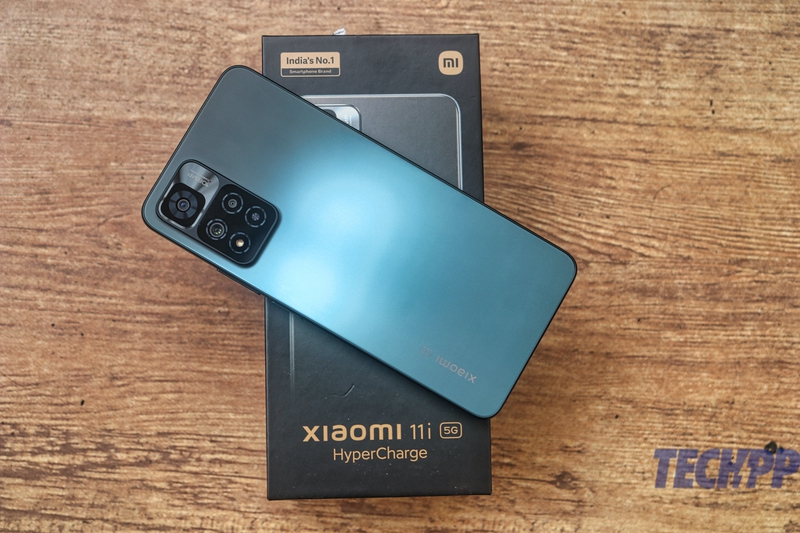 Delivering on the HyperCharge hype

First things first – the HyperCharge tagline is totally justified. We have recharged our phone from 0 to 100 a few times and each time it charged in twenty minutes or lesser. That is frankly the fastest we have ever seen on a smartphone. The battery is not a small one either – it is a 4500 mAh battery. There will be some quibbling about the charging speed not being exactly as fast as what Xiaomi claims it is – 15 minutes is the figure that has been used by the brand – but take it from us, if you want a phone that charges crazy fast, this one is it.

Making this happen is a 120 W charger that comes in the box with the phone, along with a special cable (Type A to Type C). The charger itself is powerful enough to charge tablets, notebooks, and other smartphones too. A point to remember is to enable Boost Charging Speed from the Settings on the phone to be able to get optimum charging speeds. It is turned off by default. Mind you, even when Boost Charging is turned off, the phone STILL gets charged in well under half an hour. This pretty much redefines phone charging speeds as we know them.

A big, rather good looking phone

The charging might be making headlines, but the rest of the Xiaomi 11i HyperCharge is very good too. There are definitely features other than charging that will catch attention, beginning with design. Xiaomi has come out with a whole new design for the phone, one which draws a lot of inspiration from the iPhone with sides that are flat and also have the same shade as the back. The back itself is rather attractive with subtly shiny colors like Camo Green (which we got), Pacific Pearl, Purple Mist, and Stealth Black. We think that the Purple Mist is the one that stands out the most. The back has a frosted glass-like finish which makes it smooth to touch and also does not pick up as many smudges and scratches as other glass backs do – it has no Gorilla Glass protection, though, which is why we would recommend using the transparent glass case that comes in the box. 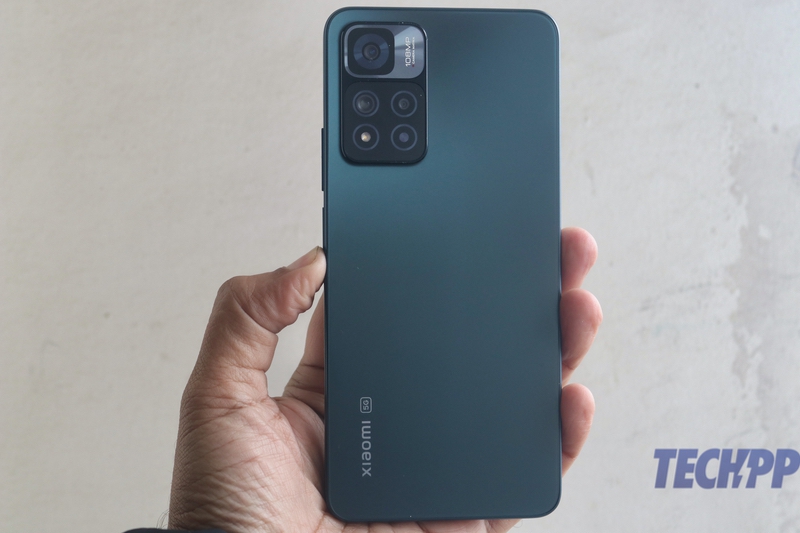 The case also helps in balancing out the very large rectangular camera unit on the back, which sticks out rather prominently. There is space for five camera lenses on the back, but only three of them are actually occupied by cameras. One is occupied by the flash and another is pure decoration, which seems a little misleading. As in many Xiaomi phones, there is a chrome enclosure around the lens at the top, with the words “108 MP” on it.

The front is a 6.67 inch AMOLED display with a punch-hole notch in the top center, and tiny bezels all around. It comes with Gorilla Glass 5 protection. The frame is carbonate which might annoy those who prefer metal frames but is perfectly fine in our book. The fingerprint scanner is on the side, doubling up as the power/display button, and there is a 3.5 mm audio jack on the top – a welcome sight in this price segment. There are also stereo speakers – one at the top and the other at the base. 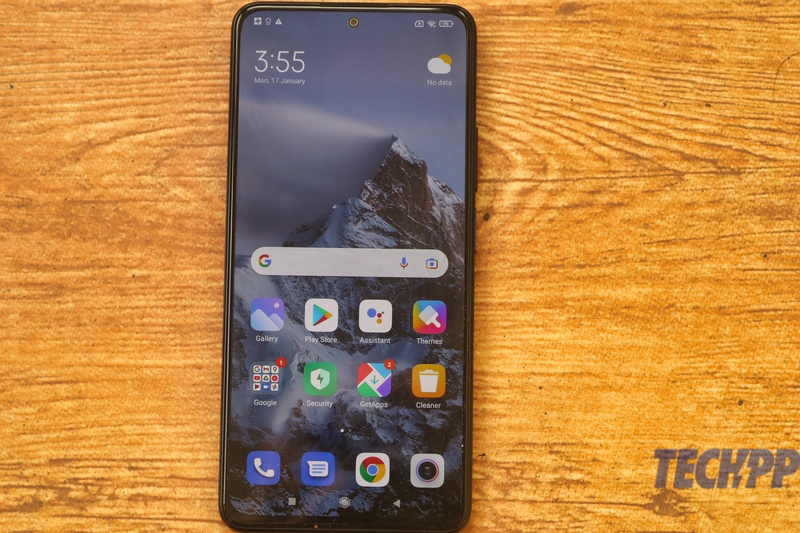 This is a large phone (163.5 mm long) and at 204 grams, is definitely on the heavier side, but we would still say that it is one of the most distinct-looking phones in its segment, thanks to those shaded, flat sides. The green and purple shades look very good indeed. Some might find the flat sides a little hard to grip, although we had no such issues. It also comes with IP53 dust and water resistance and feels reassuringly substantial.

The Xiaomi 11i HyperCharge by and large delivers a good performance. We would call it a very mid-segment phone in performance terms. The 6.67-inch full HD+ AMOLED display is wonderfully bright and colorful and the stereo speakers at the top and base, make this a great phone for viewing multimedia. The MediaTek Dimensity 920 chip driving it is not exactly designed for heavy-duty editing and gaming but handles most routine tasks very smoothly indeed. 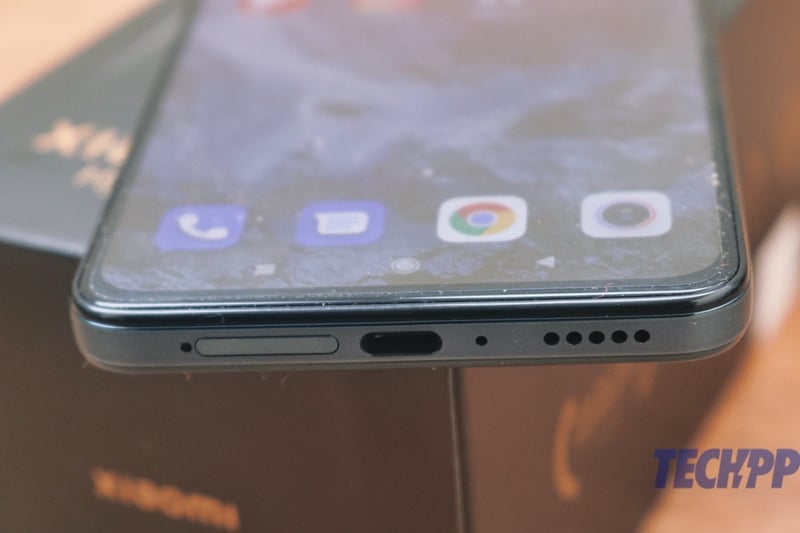 You can even play high-end games like Genshin Impact, Call of Duty and the Asphalt series with a few settings tweaked. RAM and storage stand at 6 GB/ 128 GB and 8 GB/ 128 GB, with support for microSD cards through a hybrid SIM slot.

Cameras that do the job

The cameras on the 11i HyperCharge are good operators in good light conditions. The main camera on the back is a 108-megapixel Samsung HM2 sensor which delivers lots of detail if slightly subdued colors by Xiaomi standards. The 8-megapixel ultrawide sensor is good for a wider view but more megapixels would have helped us get more details, while the 2-megapixel macro camera is a largely token presence – it can take some decent shots, but is a step down from the 5-megapixel macro cameras we have seen on some Xiaomi devices. Low light performance is decent enough too, with colors being reproduced well, but you do lose out a bit on detail. The 16-megapixel selfie camera took some very good selfies as well as a few ordinary ones – there is a certain amount of beautification but you will get good enough vanity snaps for social media. 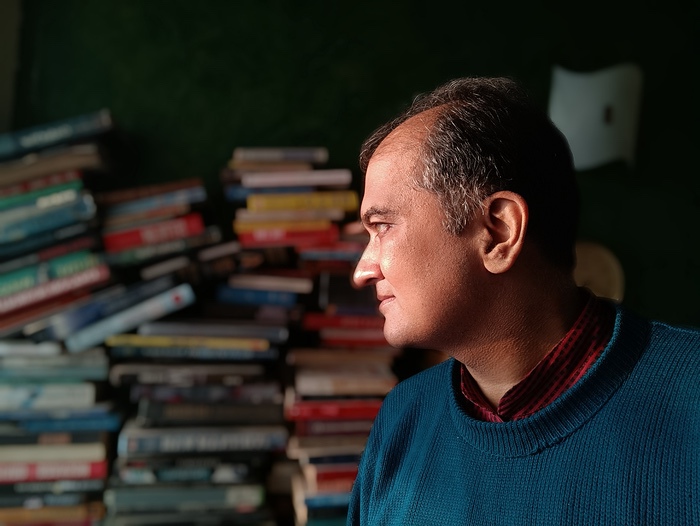 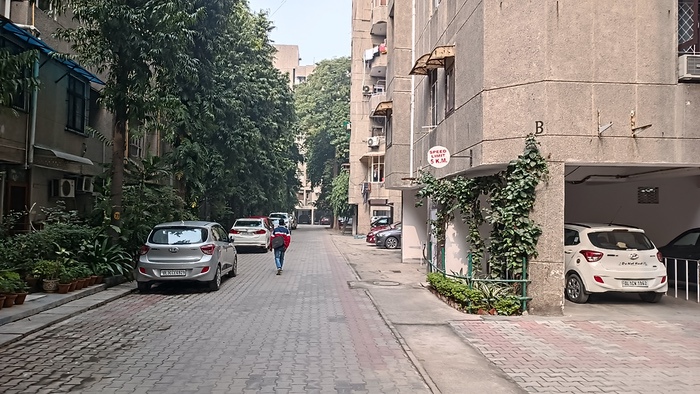 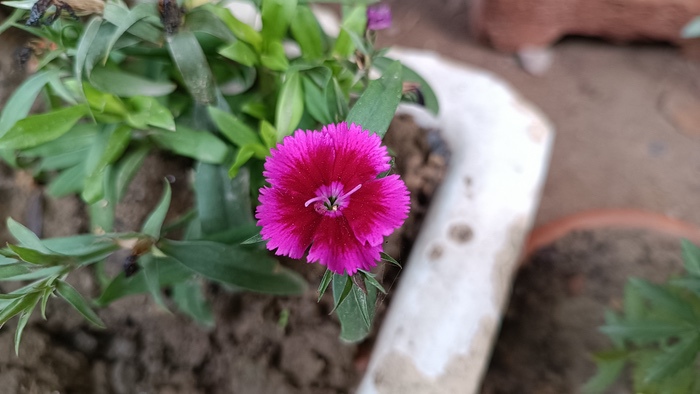 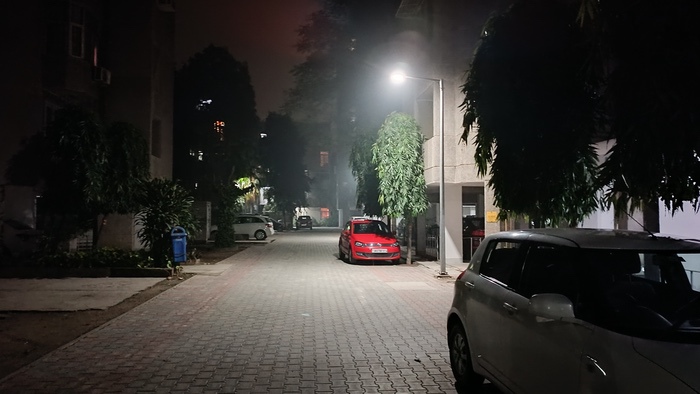 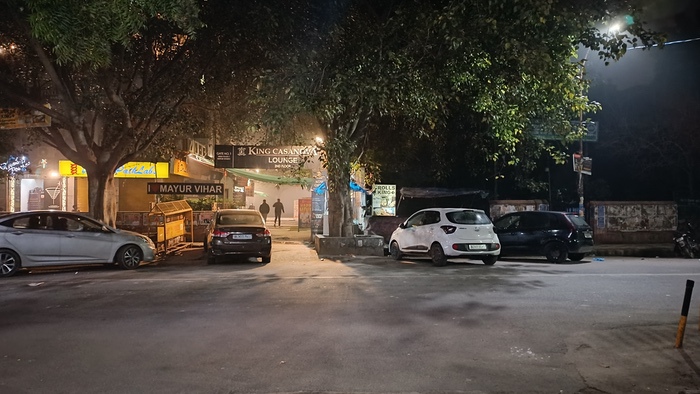 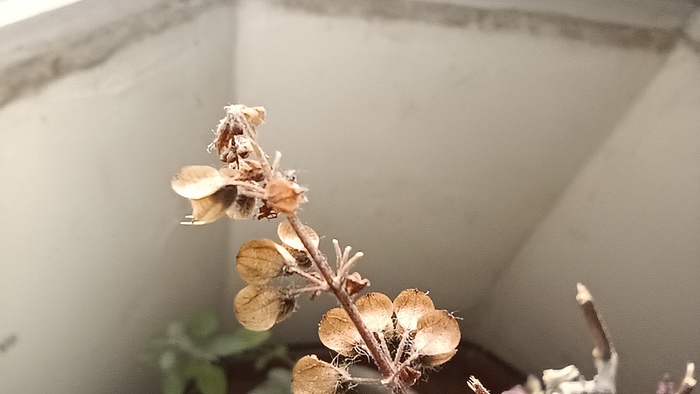 There are plenty of editing options for both photographs and videos onboard, so one can play around with content to an extent. The main sensor also supports 4K video, and video quality, in general, is acceptable. We would not call this a content creator’s device- the cameras are good, but not really exceptional.

The “good but not exceptional” tag can be slapped onto the battery as well. Yes, the 4500 mAh dual-cell battery charges very fast but in terms of lasting, it generally sees off a day of normal usage, which is acceptable but is less impressive than what we have got from the likes of the Redmi Note Pro series. Mind you, the speed at which it charges means that even if you are running low on charge, fifteen minutes will get you close to full again! 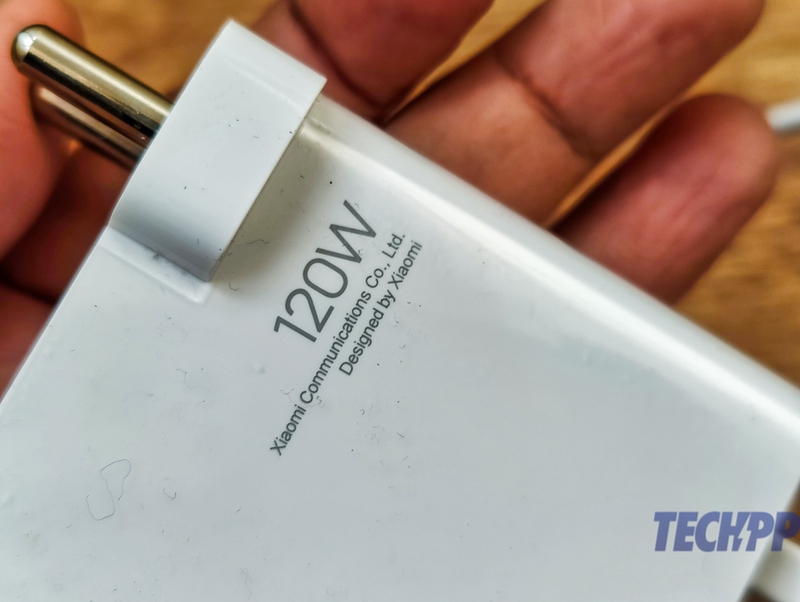 The phone runs on MIUI 12.5 on top of Android 11 (a bit disappointing now). We know there are those who do not like Xiaomi’s Android skin but we have no real issues with it and like the utilities and features it brings. The fact that you can now uninstall most apps and that there are no ads helps. The fingerprint scanner on the side works perfectly, and you have all the connectivity options you would want, including Xiaomi’s standard IR port and even 5G (eight bands). 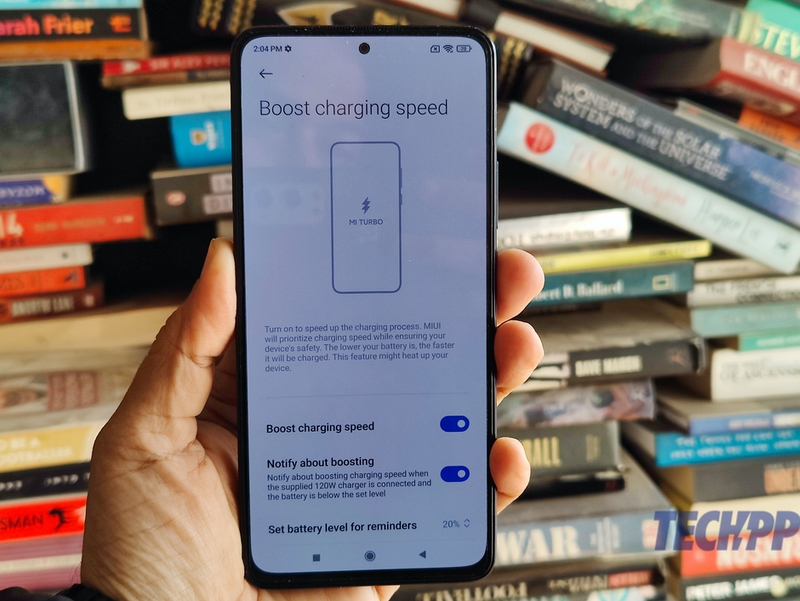 What, however, makes the 11i HyperCharge special is its charging speed, and there ironically its biggest headache is its own suffix-less sibling, the Xiaomi 11i, which comes with exactly the same specs as the 11i HyperCharge except for a slightly larger 5160 mAh battery and a ‘slower’ 67W charger. That said, it still gets charged in about half an hour, which makes it a great option for anyone wanting a super-fast charging device with a slightly bigger battery at a lower price – the Xiaomi 11i starts at Rs 24,999.

But if you want the fastest charging phone in the market, and one which does everything else pretty well too at mid-segment performance levels, the Xiaomi 11i HyperCharge is a no-brainer. This one is for those with a need for speed. Charging speed, that is.

Review Overview
Was this article helpful?
YesNo
TechPP is supported by our audience. We may earn affiliate commissions from buying links on this site.
Read Next
Nothing Ear (Stick) Review: A treat for the eyes… and ears too!
#review #xiaomi #Xiaomi 11i Hypercharge