It is always spicy when two brands launch competing devices but it gets especially fascinating when OnePlus and Xiaomi lock horns. This is because the two brands have a lot in common– they are both amongst the few brands that have managed to make a significant name for themselves in the country in a relatively insignificant period of time. Both have primarily used the ‘relatively powerful specs at a comparatively affordable price’ strategy. Both brands rose to fame without using any traditional means of advertising and now both are going head to head in a very competitive price segment – sub-Rs. 45,000. 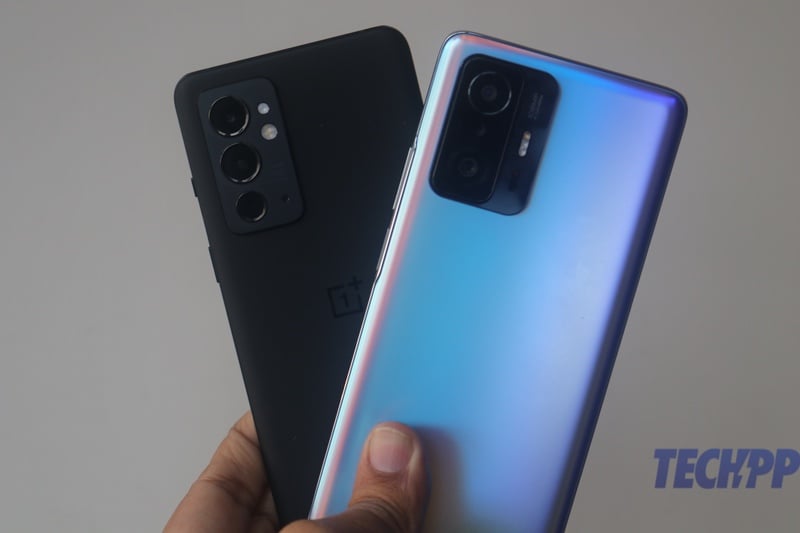 This Tech Face-Off is between the recently launched OnePlus 9RT and the recently launched Xiaomi 11T Pro. The two phones have some specs in common and their price tags are very close to each other. So if you are faced with the dilemma of which one to purchase, we are here to help you choose the one(plus) that will suit your (xiao)mi needs.

The Xiaomi 11T Pro and the OnePlus 9RT are quite different when it comes to design. One is a slightly more routine-looking smartphone while the other is edgier and style forward.

Both phones come with glass backs but the handling of that glass is poles apart. The Xiaomi 11T Pro follows in the design footprints of the Mi 11X Pro that was launched last year and brings the slightly curved color changing back, tall front, rectangular layered camera unit with a flat fingerprint scanner on the side – basically the design language of every other smartphone at the moment. We received the Celestial Blue edition which is more silver than blue but changes color when light falls on it. In no way does the phone look bad but it will not be able to stand out in a crowd.

The OnePlus 9RT on the other hand brings a fresh take on the glass back. We received the Hacker Black edition which comes with what OnePlus calls “Silk Glass” and the name justifies its look. The back of the OnePlus 9RT comes with a smooth finish which might fool some as metallic. Contrary to the usual loud, color-changing backs, this one is more subtle. There is shine to this back but it is just more classy. Even though the phone comes as a 9R upgrade, the camera arrangement of the device will remind you of the OnePlus 9 rather than the OnePlus 9R. 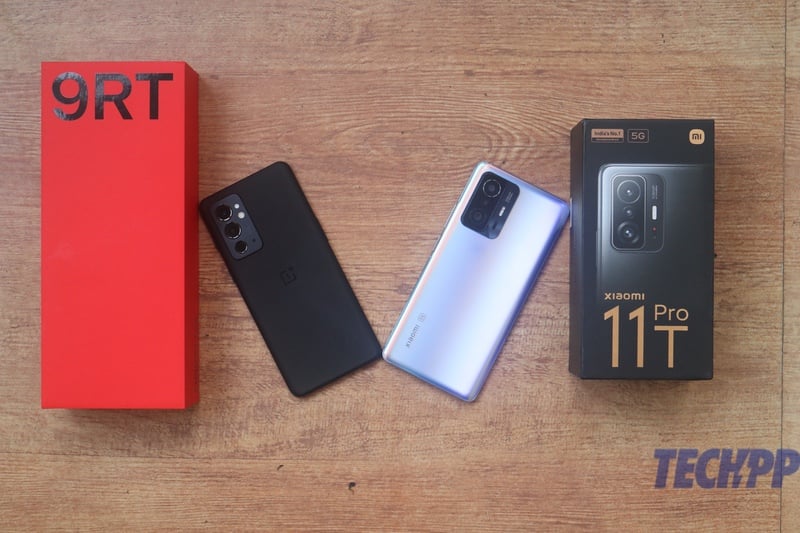 Between the two, we prefer the OnePlus 9RT simply because not only does it stand out, the design of the device is quite fresh and classy, making it the winner of this round. 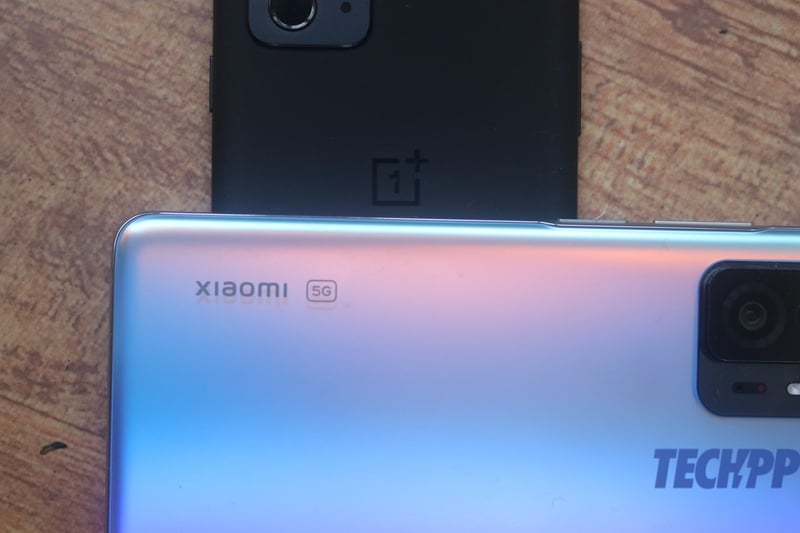 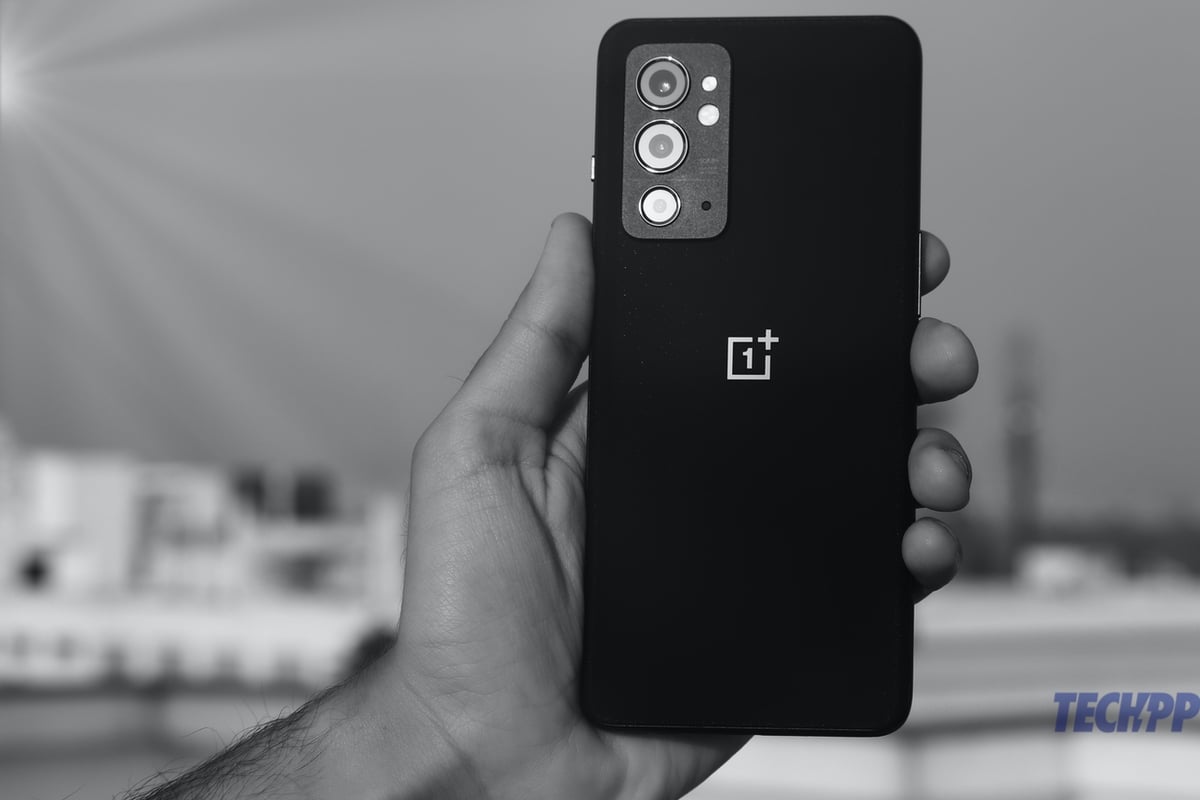 OnePlus 9RT Review: The 9R Gets into the Flagship (Killer?) Zone
Read More

Both phones come with dual stereo speakers with Dolby Atmos support but the ones on Xiaomi 11T Pro come with Sound by Harman Kardon and have Hi-Res audio support for wired and wireless audio.

In terms of specs, both phones put up a tough fight but numbers simply favor the Xiaomi 11T Pro more as the phone comes with an extra RAM/ storage variant, brings in more megapixels, and features a bigger and faster-charging battery. 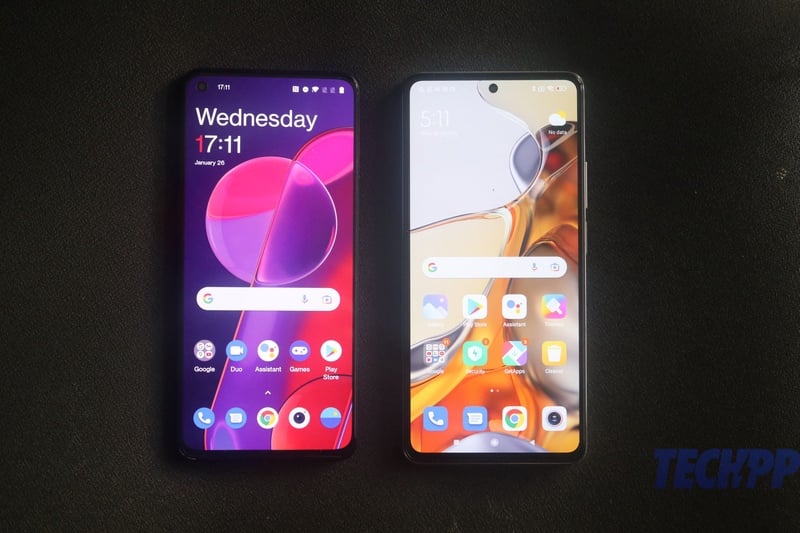 The displays of the two phones have a marginal size difference. The Xiaomi 11T Pro comes with a 6.67-inch AMOLED display while the OnePlus 9RT has a 6.62-inch AMOLED display. Both phones are equipped with HDR 10+ support and have a 120 Hz refresh rate on board. The touch sampling rate of the Xiaomi 11T Pro is 480 Hz, while the OnePlus 9RT comes with a 300 Hz touch sampling rate which goes all the way up to an impressive 600 Hz while gaming.

The Xiaomi 11T Pro also has a few display tricks. It comes with a 10-bit color panel display which allows the phone to handle colors significantly better than the 8-bit displays that usually feature on smartphones. It also comes with Dolby Vision certification. 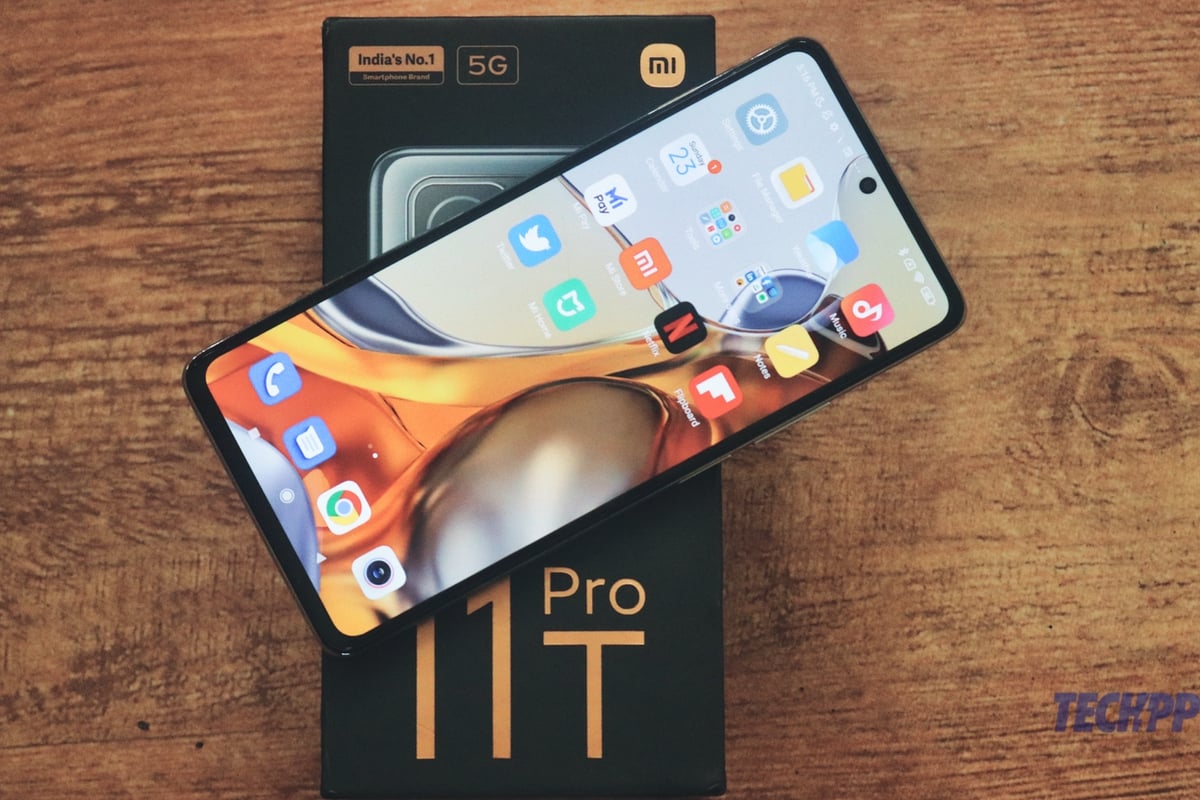 The two phones are quite close when it comes to the display. Both feature beautiful tall displays that will not only meet your daily requirements but can easily handle even the most intense tasks that may come their way. That said, the display on the Xiaomi 11T Pro handles color slightly better and offers rich contrast, and is also brighter which is the reason why this round goes to Xiaomi 11T Pro as well.

Performance: Two Snappy Dragons snap at each other

With the same processor, Snapdragon 888 powering the two devices, the general and gaming performance of the two phones is pretty much on par with each other. Both devices can handle your everyday business with ease, may it be scrolling social media or using multiple apps. The same stands in the gaming department as well. Whether you are a casual, non-serious gamer, or a hardcore gamer, both OnePlus 9RT and Xiaomi 11T Pro can handle your gaming needs, even at maxed-out settings. Both have a 120 Hz refresh rate but the OnePlus 9RT has a better touch sampling rate, while gaming. That said, the difference between the two does not really come to the fore. 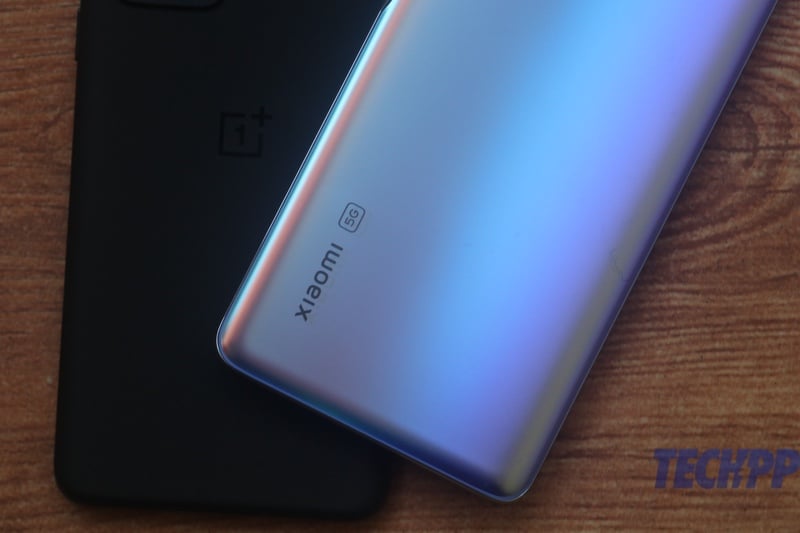 The OnePlus 9RT features an in-display fingerprint scanner which works well but does not really stand a chance in front of the physical fingerprint scanner on the side of the Xiaomi 11T Pro. It is simply faster and more accurate.
We wish the two phones came with proper water and dust resistance but at least the Xiaomi 11T Pro comes with IP53 certification making it splashproof. The OnePlus 9RT on the other has no IP rating.

Cameras: Not just about megapixels 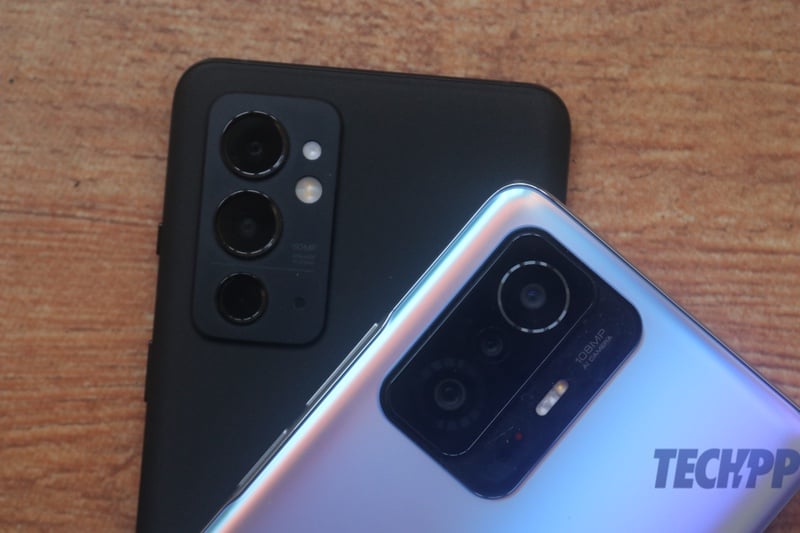 This has been a pretty one-sided battle so far with Xiaomi pretty much bossing most rounds. The megapixel count may suggest that the 11T Pro has this one in the bag as well. However, the megapixel difference between the two phones does not really show in their performance. The OnePlus 9RT performs slightly better despite the lower megapixel count if anything.

In well-lit conditions, both phones can produce some really good snaps. The main sensors on the phone capture a ton of detail and surprisingly, both devices reproduced colors that were more realistic than saturated, something we are not used to seeing in smartphones.

That said, the OnePlus 9RT performs better in low light conditions as it delivers snaps with a lot of detail and better colors as compared to the 11T Pro which struggles a fair bit in low light settings. The 9RT’s results are much more consistent as well.

The OnePlus 9RT also delivers better video, especially in low light as compared to the Xiaomi 11T Pro. The lack of OIS definitely comes as a big hurt for Xiaomi in this department.

That said, macro videos on the 11T Pro are definitely a major plus and the macro sensor also delivers some really good close-ups while the same cannot be said about the macro sensor on the OnePlus 9RT, which seems more for show than anything else.

The 16-megapixel front-facing cameras on both phones are more than capable of capturing a good enough selfie for the Gram. Both will smoothen up your skin but 11T Pro’s front-facing camera does better and delivers more detail and realistic colors. Xiaomi has also loaded the phone with a number of editing options and modes while OnePlus only brings a handful of basic options to choose from.

Both phones have been very toe-to-toe in this round. But the main sensor of the OnePlus 9RT performs better and delivers more consistent results which is why it is the winner of the camera round.

Software and UI: Loaded vs Bare

A brand new smartphone coming with an older version of the software is always a bit disappointing. This is what has happened with both the OnePlus 9RT and Xiaomi 11T Pro. The two phones run on Android 11, which is a letdown considering other brands are releasing phones with Android 12 now. That said, it kind of levels this playing field between them. 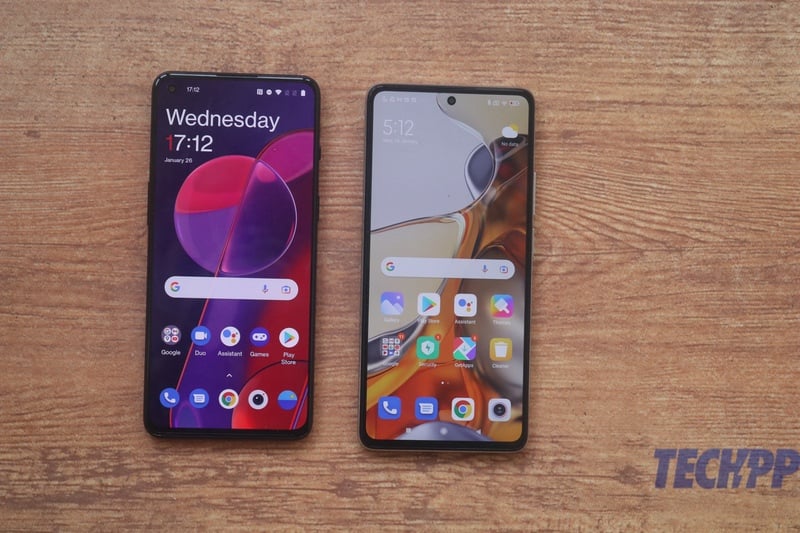 OnePlus and Xiaomi have two very different skins. OnePlus’ OxygenOS 11 is clean, simple, and uncomplicated but does not offer too many features or a rich UI experience. Xiaomi’s MIUI 12.5 on the other hand is pretty feature-loaded and rich. This round basically depends on what you prefer in your smartphone. If you like bare, clean skin, the OnePlus 9RT is the phone to choose from, but if you want to do a lot with your phone right out of the box, Xiaomi 11T Pro is the phone for you.

The 500 mAh difference between the battery of the two phones reflects in their performance. The Xiaomi 11T Pro with a 5,000 mAh battery can easily see more than a day of usage while the OnePlus 9RT with a 4,500 mAh battery with the same usage will see about a day. 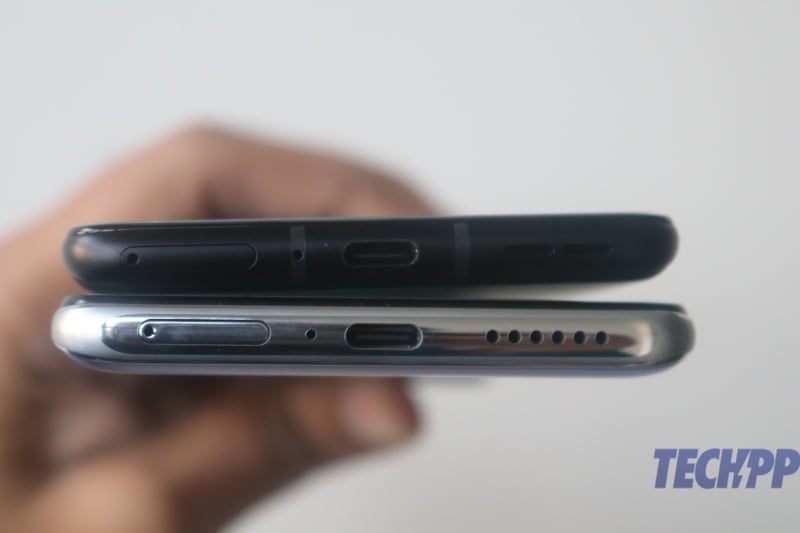 Fast charge support is present on both phones but Xiaomi brings the ridiculously fast 120W fast charging ability to the Xiaomi 11T Pro while the OnePlus has its 65W Warp charge on the OnePlus 9RT.

Xiaomi 11T Pro can be fully charged in about 20-25 minutes while the OnePlus 9RT takes about 30-35 minutes. The difference is not that great but there is a clear difference.

Price: Battle of the bucks 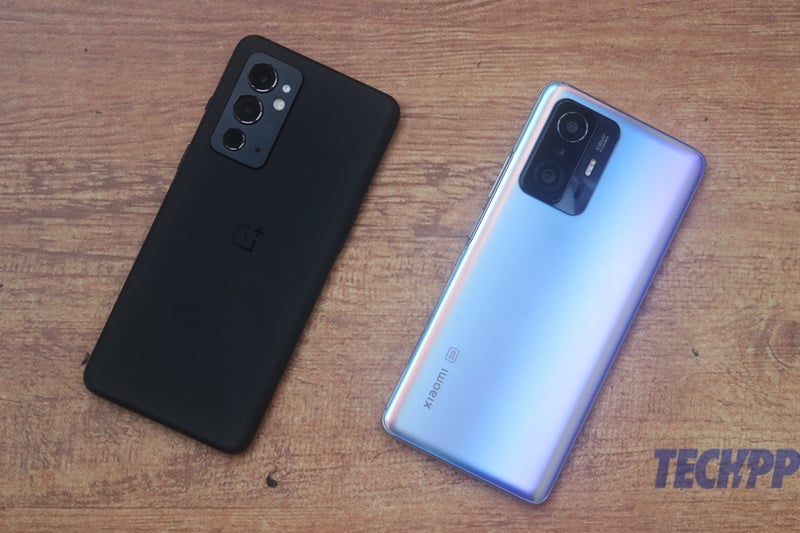 This has truly been the battle of the budget flagships with both, the OnePlus 9RT and the Xiaomi 11T Pro putting their best foot forward. The Xiaomi 11T Pro seems to be the clear winner of the duel as it has won five rounds out of eight with one being a tie.

The Xiaomi 11T Pro not only has better specs and is more affordable, making it more value for money but also performs better compared to the OnePlus 9RT.

That said, all hope is not lost for the OnePlus 9RT as it delivers better camera performance and has a classy, fresh design that stands out far more than the Xiaomi 11T Pro’s.

That said, whichever phone you pick, you are sure to get top-notch performance, a beautiful display, and great battery life with really fast charging.

Was this article helpful?
YesNo
TechPP is supported by our audience. We may earn affiliate commissions from buying links on this site.
Read Next
OnePlus Buds Pro 2 Review: Great buds for pro bros with OnePlus devices
#comparison #Face Off #oneplus #OnePlus 9RT #xiaomi #Xiaomi 11T Pro 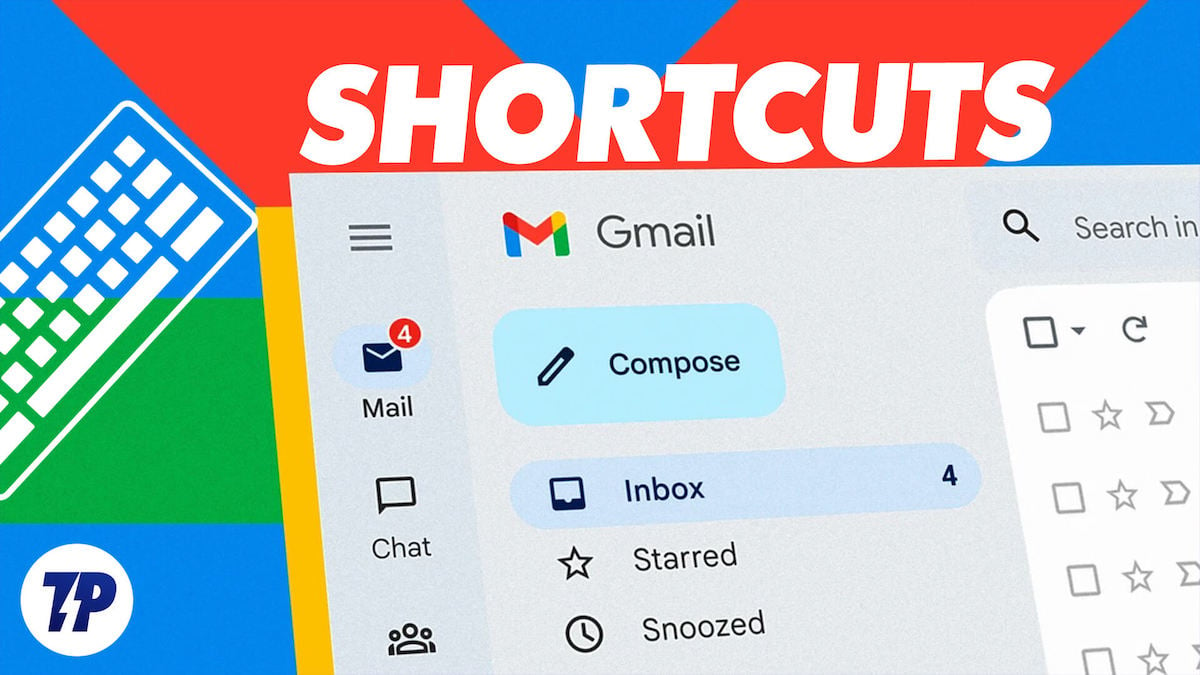