When it comes to wearables of the wrist-y kind, the world is divided into two camps – those who prefer smartwatches and those who swear by fitness bands. However, recent times have seen a zone emerge between these two extremes. This comprises those folks who find smartwatches too bulky and heavy and fitness trackers a little too small to read comfortably. It is this “middle” segment that Xiaomi is trying to attract with the Redmi Smart Band Pro. 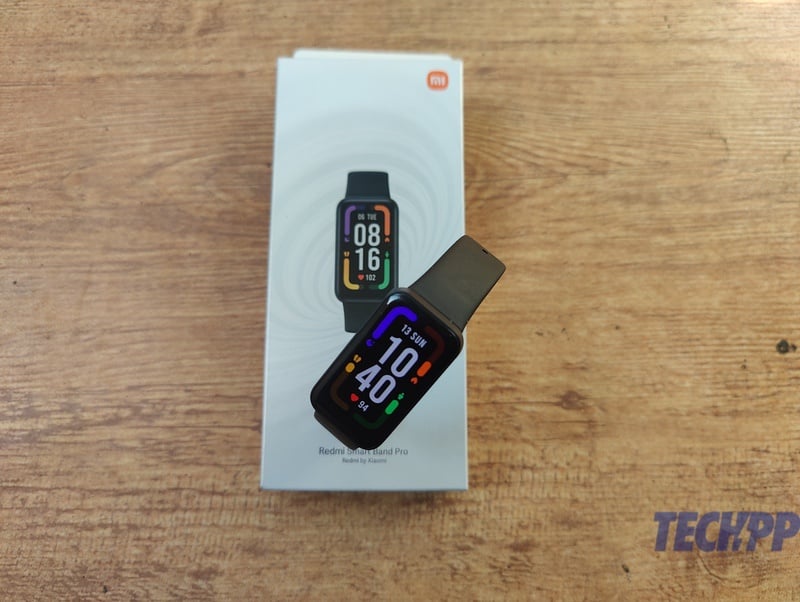 Bigger than a band, smaller than a watch

Xiaomi has been using the term “Redmi Smart Band Pro SportsWatch” to refer to the Redmi Smart Band Pro, clearly revealing its watch aspirations. In design terms, it is definitely closer to a fitness band, but its extra width does give a slight watch-like look. There are no navigation buttons on it at all, although the bezels around the display are not very slim.

The main unit is made of plastic with glass on the front and sensors and charging points on the back. It is more rectangular and a bit more box-like, as compared to the general capsule-shaped, curved fitness tracker units we see. We got a black TPU strap in the box, which is comfortable to wear. Xiaomi says straps in other colors will be available soon. The band comes connected to the strap, which is a good touch in our opinion, as it saves time and can be tightened and loosened using a dot-like insertion point – we would have preferred a normal buckle, but this one works too. Incidentally, the connector of the main unit is a proprietary one, so you can only attach specific bands to it. Equally proprietary is the two-pin charger which attaches magnetically to the back of the band.

The Redmi Smart Band Pro is a very smart-looking device that is discernibly bigger than a conventional smartband but is still smaller than a smartwatch. It looks better and is easier to read than most fitness bands – that extra width helps. At about 25 grams (with the strap), it is light enough to be worn and be barely noticeable. It comes with 5 ATM water resistance which means you can wear it comfortably in the pool. We do not know about the kind of glass covering the display, but the build seems pretty tough and has shown no smudges or scratches in our week or so of usage. 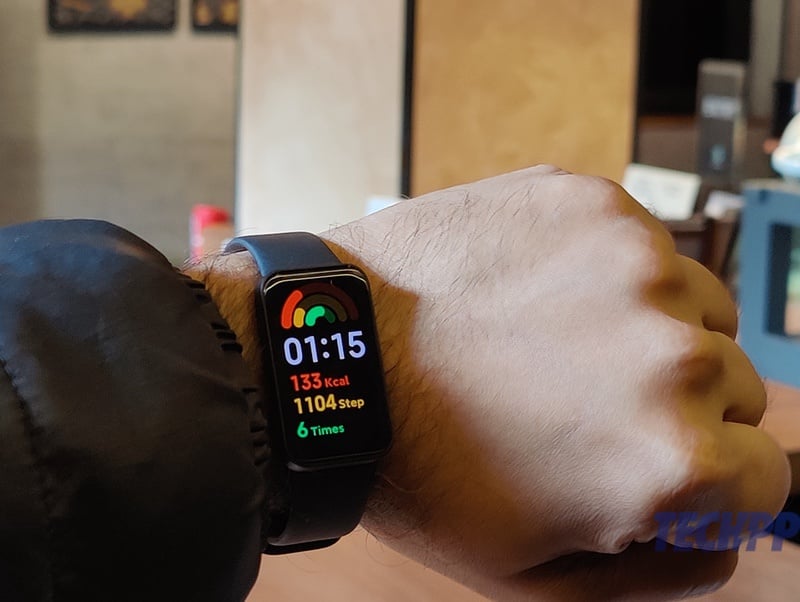 It comes with a number of sensors and features, but let’s get one thing clear – the most outstanding feature of the Redmi Smart Band Pro is that beautiful, large display. It comes with bright colors and about 450 nits of brightness.

In purely numerical terms, its 1.47-inch AMOLED display might seem smaller than the 1.56-inch one of the Mi Band 6 released last year. Still, it actually is wider, making it appear significantly larger and giving us more reading space. This gives it an almost watch-like feel.

More importantly, it allows us to actually read more on the device itself with just a turn of the wrist, with no need to squint at tiny numbers and fonts. We had seen this on the Huawei Band 6, and think it is the most convenient form factor for those who actually want to read data on their fitness bands. This is close to the reading convenience you get on smartwatches – we could even see heart rate graphs clearly, without having to bring the band too close to our eyes. Auto brightness works surprisingly well on it – it actually chooses from five brightness levels depending on the light conditions around you. We found the band very easy to read in pitch darkness as well as bright sunshine.

There are plenty of watchfaces available, ranging from iPhone complete-the-activity-circle clones to analog faces to retro digital ones, some focused on time, others on blending time with some activity and health data. There is plenty to choose from, and Xiaomi says that there are more to come. No matter which one you choose, viewing it will never be a problem.

An always on display too 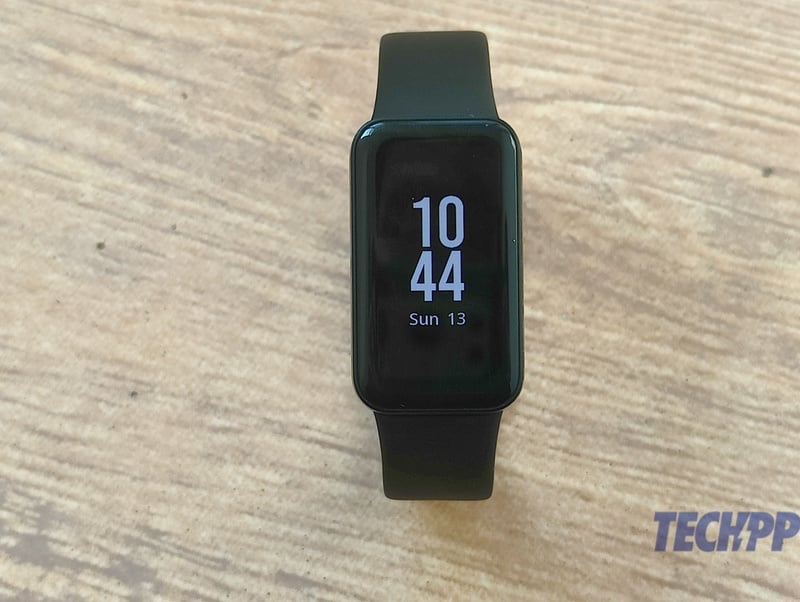 The band also comes with an always-on display option, a rarity in fitness bands and watches at this price point. When the display is locked, you can still see the time and date on it in a rather minimalist but clear format. You can keep it running around the clock or even schedule for how long it works, as some folks might see no purpose in having a screen shining when they sleep. Yes, it does drain battery life, but that is unlikely to be a major issue, given the good battery life of the device. In a neat touch, you can actually lock the display by just placing your hand over it, which is very handy (pun not intended).

This is the first fitness band that we are actually comfortable reading and viewing information on. But, is it as convenient for viewing content as a proper smartwatch, or even something like the Redmi Watch launched last year? Not quite – the Watch’s larger display size does make a difference – but it is way more compact and discreet, and that surely counts for something. We just wish there were a few more options for the always-on-display format.

A truckload of features 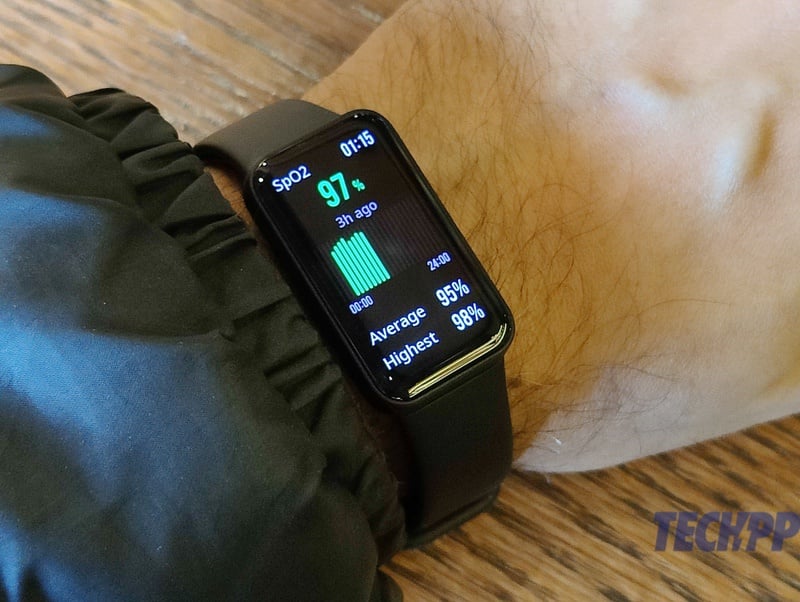 The display might be the star of the Redmi Smart Band Pro, but the device comes with a stack of features as well. There is a heart rate sensor and an SPO2 sensor, although there is no GPS, for which the band relies on the phone with which it is paired. You get options like sleep tracking, the ability to track more than 110 workout modes, women’s cycle tracking, stress tracking, and even some automatic tracking modes. You can also get notifications from different apps on your phone on the band. That large-ish display means that you can actually read most of them, although you generally just get to see a line or two and cannot interact with them. You can also view incoming calls and choose to reject them if you wish, but no more than that.

The band pairs with Android devices using the Xiaomi Wear app and iOS ones with Xiaomi Wear Lite. And in both cases, the pairing is relatively smooth, although we had to pair the camera separately on our Xiaomi 11T Pro. Using the band is simple. The interface is a blend of taps and swipes. You swipe down for notifications, swipe up to access different apps and features. A swipe to the right takes you back, and a swipe to the left takes you to the next option. Swiping left from the watch face lets you view heart rate, blood oxygen, weather, activities, targets, and basic settings. Swiping right from the watch face will give you the same options in the reverse order.

There are some smart features on board as well – you can control your phone’s camera and the music playing on the phone from your wrist. 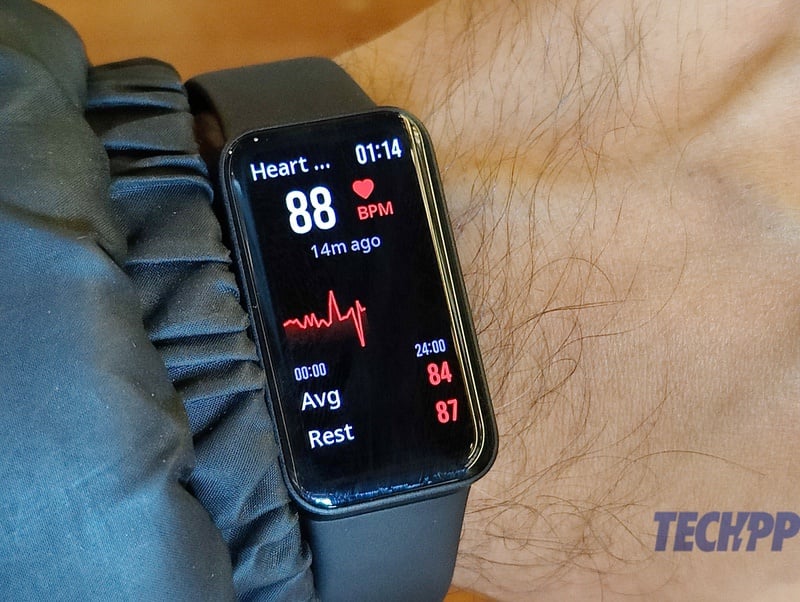 The real forte of the band is its fitness and activity tracking. It turns in a very good performance on this front. It can recognize walking, running, and running on the treadmill automatically and was surprisingly accurate. We were initially surprised to see our wrists buzz lightly whenever we started walking briskly or went on a jog, but then got used to it. The tracker even pauses when you stop for a while. It did a decent job with workouts as well, and even counted the number of times we jumped rope and let us know when we hit our calorie goals in steps and other exercises.

A slight irritant is a fact that the band buzzed when we started our run, buzzed again if and when we paused, and then buzzed yet again when we started running once more. Also, turning off the tracking required keeping an onscreen button pressed till a circle was formed around it. Unfortunately, our fingers covered the button entirely, so we really could not know to what extent the circle had been completed! However, we got the hang of it and got used to the frequent buzzing (which is sharp enough without being uncomfortable). 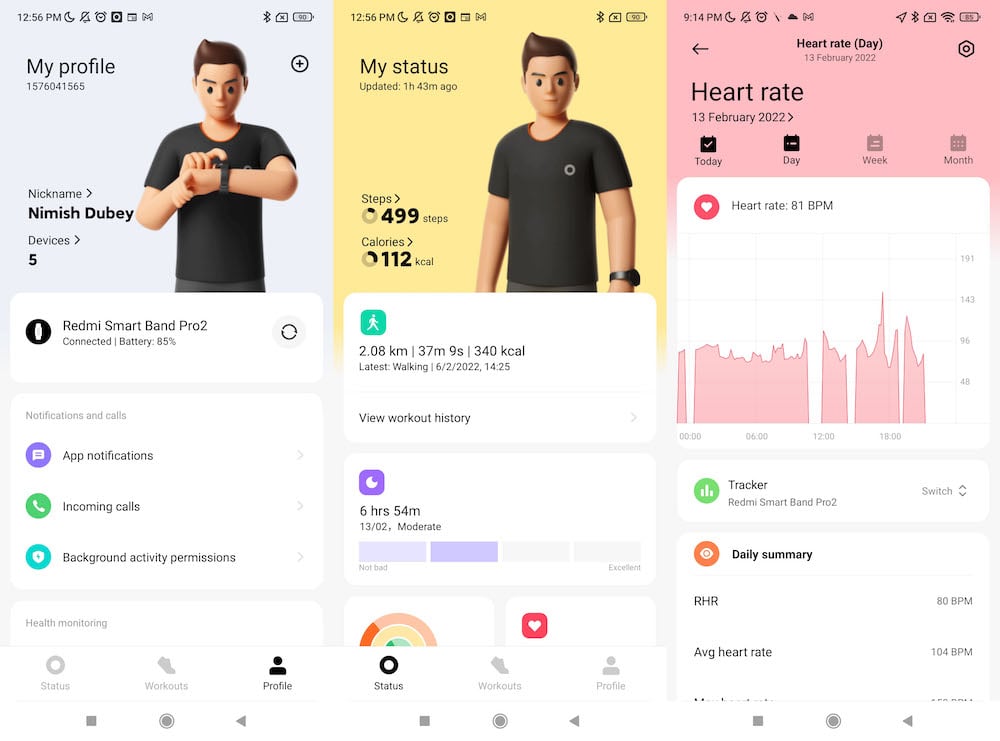 Step counting while walking or running was close to accurate, with the best results coming when we took our phone along too (the GPS, we think). Both heart rate and blood oxygen measurements were in line with what we got from other wearables. While heart rate is measured automatically around the clock, blood oxygen measurement is automatic only while you are sleeping. You can check it manually whenever you wish, though. There are also stress readings for those who follow them, and the band can help you through some breathing exercises to calm you down as well.

Over-sleeping a little and a battery life that won’t keep you awake!

The one area where things went a little wrong initially was in sleep tracking, where the band often kept insisting that we were sleeping a very healthy seven or eight hours, although we seldom slept more than four to five hours. However, things seemed to improve after an update. There sometimes seemed to be a bit of a lag in syncing data between the phone and the watch, but things worked fine by and large. The display is very responsive to touches and taps, and the only time things seemed to stutter was when we tapped the display to wake it up – sometimes it would take a few taps, sometimes just one. 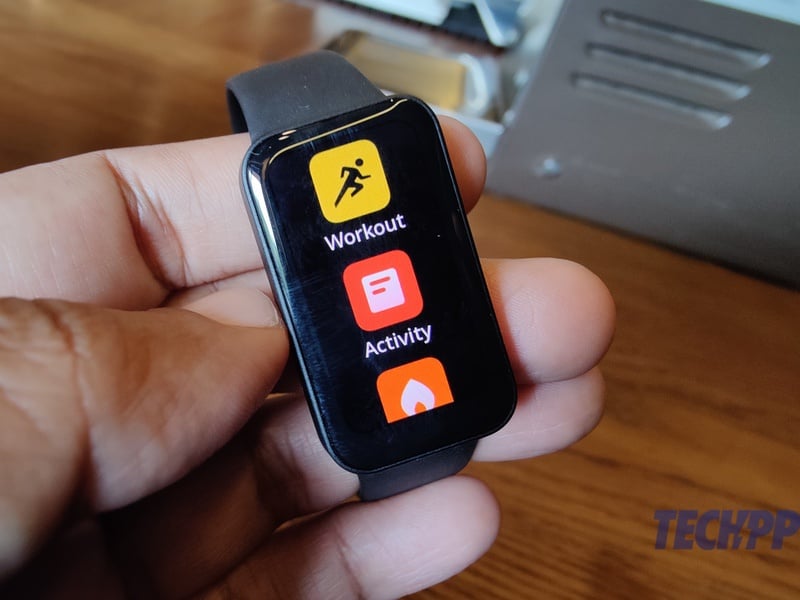 The band’s battery life is supposed to be 14 days in normal mode and 20 days in power-saving mode. Well, if you turn on the always-on display, enable blood oxygen measurement, sleep tracking, and monitor stress and other features, you will end up with about five days to a week of usage. That is very manageable, considering just how many functions and features are available. The band itself got charged in about 70 minutes using the 33W charger we got with the Redmi Note 11.

Do you need to watch out for this band?

The Redmi Smart Band Pro is priced at Rs 3,999, although it is available at an introductory limited offer price of Rs 3,499 at the time of writing. That price puts it right in the zone of its two siblings, the Mi Band 6 (Rs 3,499) and the Redmi Watch (Rs 3,999). We think that the wider and always-on display gives it a clear edge over the Mi Band 6, but the Redmi Watch is a little more formidable, thanks to its bigger display (not AMOLED though) and inbuilt GPS. Also in contention are the likes of the Amazfit Bip U smartwatch and fitness bands from the likes of Bolt, Noise, and Goqii. But, of course, the biggest challenger is the Huawei Band 6, which has a similar Rs 3999 price tag and comes with a very similar form factor, with round-the-clock blood oxygen tracking but misses out on an always-on display. 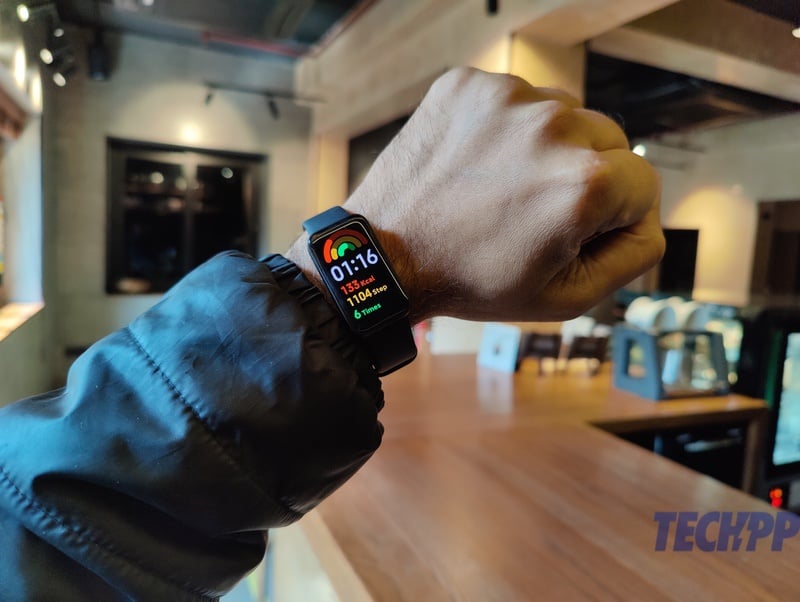 So should you be getting a Redmi Smart Band Pro Smartwatch? A lot depends on how much you value that display. It is a very good fitness and activity tracker, but it is the unusually broad and bright display that sets it apart. You will get fitness band options that are equally feature-rich and cost much less from the likes of OnePlus, Realme, Oppo, Noise, and of course, from Xiaomi itself. But if you want a larger display that lets you actually read text and figures easily without squinting or getting into the bulk (and/or price) of a watch, the Redmi Smart Band Pro should fit the bill.

There is a middle ground between smartwatches and fitness bands, and at this time, the Redmi Smart Band Pro is the boss of it!