Better late than never. Thanks to the indifferent attitude of Apple towards Indian consumers, I had to wait this long to get my hands on the magical (pun intended) iPad. I was one of the many guys who openly criticized Apple iPad the day it was announced. Most of those points still stand valid, but after having used the iPad for a fortnight, here is what I think about it. 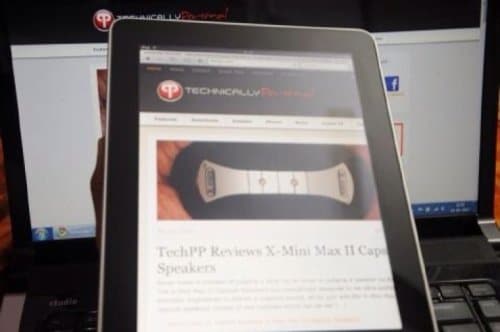 1. Irrespective of how many photos you have seen and how many videos you have watched, iPad still manages to amaze you with its near-flawless display and picture quality.

2. It’s heavier than you might expect it to be. The moment I took out the gadget from the box (which is really compact), I felt like dropping it. Definitely not meant to be used with one hand for a longer time. You better look for a couch or a bean bag if you plan to plan with it for a longer duration.

3. The backside is way too smooth to be used naked (without the case). Couple of times when I used it bare dressed, it nearly slipped out of my hands.

4. The battery life is amazing. It works as advertised by Steve during iPad launch.

5. It is not possible to charge the iPad via USB. I was scared the first time I tried doing that, as the battery icon on top right started showing “Not Charging”. But then I got to know that the normal iPhone charger simply doesn’t have the oomph to charge this beast.

6. One can’t help but miss the USB port, specially if you travel frequently. Personally, I don’t see this as a big issue but I can completely understand why it’s a deal-breaker for many. 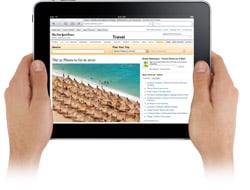 7. Browsing the web with iPad is a real treat. It surely gives the best browsing experience amongst all the gadgets I have used till now and by far as well. Browsing the web on Portrait as well as landscape modes are equally good.

8. The inability to optimize the homescreen to our likings is a big minus. The icons look spread out and you can’t fit more than 20 apps in one homescreen at any time.

9. The virtual keyboard rocks! Specially in the landscape mode, it’s a breeze to type using the iPad. I almost regret getting a wireless keyboard. But then I realize its the auto-correction in iPad helps to minimize the spelling mistakes.

10. Most of the “iPhone-only” apps looks crappy on iPad due to lower resolution. Apple does allow you to “2x” the size to fit the screen, but that doesn’t help at all.

11. Having used iOS 4 on iPhone, I badly miss the multi-tasking on iPad.

12. Watching Videos on iPad is an experience on its own. Even if you hate iPad for everything else, you will still love it as a multimedia device. With apps like cineXPlayer, one can easily watch .avi videos too. The screen display is optimized for multiple viewing angles which is another huge plus for me.

13. As much as I love the screen quality I hate it for being a magnet towards fingerprints. Make sure you buy a proper screen protector.

14. Many of the iPad ready apps are still US-only, which is a big minus for international users like me. But then, there are fool-proof ways to create a US iTunes account (without a credit card) which makes it manageable to download and use these apps.

15. Kids love to use iPad. Not only that it is easy to use, the apps make it even more exciting for them. Drawing apps, piano apps and even games keep the kids glued to the iPad.

16. The apps add value to the device. Be it the iBooks or the Kindle, be it Flipboard or Twitterific, they make interacting with the web a real pleasant experience. The apps are rich in user experience. On the flip-side it makes the iPad apps pricey. Most of the apps are priced in the range of $2.99 to $30. With time, I expect the price to come down, but for now I am happy exploring those few free iPad apps.

17. Checking mails on iPad is a treat by itself. You would know what I mean if you are an iPhone or iPod touch user. With iPad, Apple has introduced a new UI element, which they’re calling popovers, that enhances the email experience.

18. Lack of Flash – do I even need to talk about it. Having been an iPhone user for an year, I no more consider this a huge setback, but others have every reason to complain and crib.

19. iPad as an ebook reader is a killer. Every time I show iBooks to someone, they want to flip the page themselves. But yeah, absence of support for ePub format is a negative.

20. So, do I recommend buying an iPad? Most certainly YES! I believe it is decently priced at $499. In spite of some shortcomings, it is still a gadget you can use and admire every day!

Expect a lot of news and reviews about iPad accessories soon.

Want to make your 32 GB iPad a notebook? Grab these five accessories!
Read Next