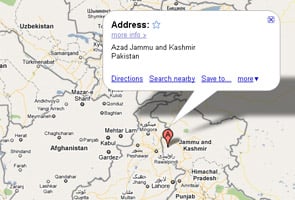 Google India has been given a notice by the Indian government or showing Pakistan Occupied Kashmir (PoK) as part of Pakistan. The tool in question is not Google Maps directly, but its Google’s Insights For Search which shows search volume patterns across specific regions, has depicted PoK as part of Pakistan – when in actually is still a disputed area.

This is not the first time Google has found itself in midst of geo-political controversies. As pointed out by NDTV, a year ago, Google’s popular maps service Google Maps was mired in controversy for showing Arunachal Pradesh as part of China. Then Google had admitted that it goofed up and rectified the mistake.

Google risks getting banned in India if it doesn’t correct the mistake, but when contacted, Google said that they have asked the product team to correct the mistake immediately. The Indian IT minister, Mr. Sachin Pilot also said the IT Department has been asked to survey all such companies showing inaccurate maps.

Free Video Conferencing: Google, Microsoft and others to…
Stepping outside in Covid Times? Look at Google Maps before…
How to get personalized restaurant recommendations on Google…
Need to choose a dish at a restaurant? Use Google Maps!
Delhi government uses Google Maps to fight hunger in…
How to Find Air Quality of a Place Using Google Maps