Notion Ink Adam has to be one of the most awaited new gadgets this holiday season. Earlier this month, we had reported that Adam is sure to land before Christmas and pre-ordering will start in December. Now, we seem to know the actual date for the pre-orders – December 9th.

Some eagle eyed folks at Android Police have come out with the date (Dec 9th) based on the number listed on Notion Ink’s redesigned homepage which was 10001 two days back, 10000 yesterday and 1111 today. For those who are not familiar with the binary code, the initial number listed there was said to have been 17, followed by 16 yesterday, and 15 today. 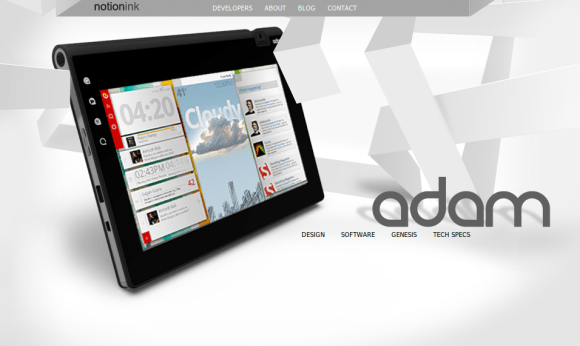 Since the number changes each day, it supposedly counts down to December 9th, most probably the day when the new tablet PC would be made available for pre-order for all of those who are interested in purchasing it. Now that is exactly in line with Notion Ink’s CEO – Rohan Shravan’s announcement of an early December date for pre-orders.

As you might know, Adam tablet was supposed to be launched in Q1 2010 and the date was dragged on due to investor issues. Now that everything seems settled and in-place, the Bangalore based company is confident of Christmas launch of its Android based tablet.

Strategically as well, December 9th seems to be an ideal date for pre-orders to start, since the holiday season would have just begun in US and other countries. According to a recent survey, Apple iPads have outdone Microsoft’s Xbox 360 as the in-demand gadget this holiday season. Adam, being touted as the strongest competitor to iPad, can really make the most of the holiday season if priced properly.

We have reached out to Notion Ink for their comments on the pre-order date and will update the post as and when we get a reply.

Was this article helpful?
YesNo
TechPP is supported by our audience. We may earn affiliate commissions from buying links on this site.
#adam tablet #notion ink adam