These days, looking for the best ‘All-in-One’ PC isn’t so easy. There are so many options available. Gone are the days where you only had to choose between the expensive high end units like the iMac and the low end units such as ‘Net-tops.’

As Tech has moved on, so has the range and availability of these machines to a much wider audience, this has meant that anybody from the minimalist office to the space starved bedroom can now utilize these machines to suit their needs.

Below we have listed some of the best all-in-one PCs you can buy this holiday season and in 2011. 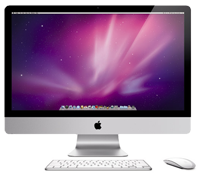 iMac may not be a PC but that shouldn’t stop it from appearing the best all-in-one computers, isn’t it? You are now able to specify a Solid Sate Hard Drive at 256Mb on top of the 1Tb, however given the high price of this model in its base form is adding a SSD for an extra £600 really a good option? I have spoken before about the upside of using SSD tech in computing and believe that the prices will soon come down.

The iMac uses the SSD as the boot volume which makes start-up nearly instant, applications run seamlessly and quickly and the machines quad core i5 processor makes light work of anything you throw at it, and using the ATI Radeon HD 5750 graphics card on top makes this a fantastic all-in-one PC. 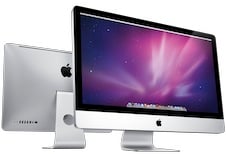 As of mid 2010 all new iMacs now use Intel’s Core i-series processors, with the mainstream models using i3 chips and the most expensive model using the i5 quad core, this is a very welcome move by Apple as it means the new iMac’s can utilize the Core i3’s Hyper Threading facilities, this means the machines are great at multi-tasking and are fast when it comes to running applications which require more than one core. The iMac’s ATI Radeon HD 4670 graphics card adds much to its multimedia and gaming capabilities and as we have come to expect from Apple the screen is as excellent as ever, and can be viewed from almost any angle without the colors shifting. 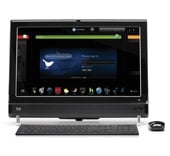 This is the latest in the HP TouchSmart range from HP, which incidentally has been the range leading the pack since the beginning of All-in-one PCs and quite frankly they don’t come much more powerful than this model, driving the 23″ touchscreen is a 2.13GHz Intel i3 processor, with 4GB of DDR3 and a huge 1TB hard drive. HP has designed the TouchSmart with entertainment in mind and as such it comes with TV in ports and a dedicated graphics card for video playback. There’s no Blu-ray included which is a bit of an issue, but HD movies will look fantastic on the 23” display. 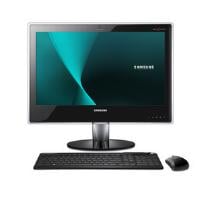 Samsung have produced probably the closest thing you’ll get to an all-in-one computer that looks just like a monitor. Ok so it’s not state of the art, but is decently powered by a Core 2 Duo processor and Nvidia GeForce 310M graphics as well as 4GB of memory and a 500GB hard drive. To say this is an entertainment PC it is unfortunate that there is no TV tuner in my option a missed opportunity. To redeem itself there is plenty of connectivity, including Wi-Fi and 6 USB ports, this is how a touchscreen Windows 7 PC should be, and the quality of the finish is typical of Samsung. 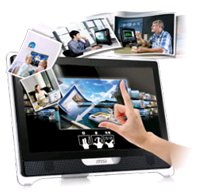 While this isn’t exactly a budget choice, this upgraded version of MSI’s WindTop uses Nvidia’s Ion graphics technology as well as a reasonable 2.2GHz Intel Core 2 Duo chip, this machine also boasts 4GB of memory and a 640GB hard drive plus a 5W integrated speaker system delivering a beefed-up sound – ideal for gamers who want a computer that doesn’t look out of place in a living space. It’s all finished off with an integrated TV tuner should you want to use it as a spare TV. 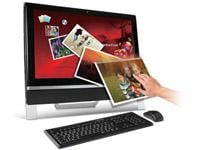 Packard Bell has come a long way recently, both in terms of its components and aesthetics, this attempt at an all-in-one computer is worth consideration. The Packard Bell does suffer from a lack of power in the processing department. The Pentium processor (which is still used in thin and-light laptops where battery life needs to be conserved) is a little weak compared to competitors, and the graphics, too, are a little disappointing plus the Packard Bell is the only model in our test not to feature dedicated Nvidia graphics. However this machine does have 3Gb of memory and a large 640Gb hard drive that might impress some, as might the crisp 20-inch display, TV tuner and beefed-up Dolby Home Theater audio. 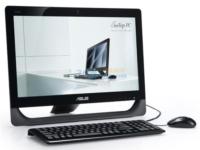 This 20” offering from Asus is certainly a good looking machine, the first impressions of the hardware is amazing. Asus has installed Intel’s Atom processor which is usually used in netbook PCs Presumably to make it a little spritelier, while the chip is still dual-core, it still lacks poke. In my opinion this PC is fine for general web surfing and video streaming as the graphics are boosted by Nvidia’s Ion graphics chip plus there is even an HDMI port to connect to an HDTV – but serious gaming is completely out of the question and there simply isn’t enough power to edit video, etc. 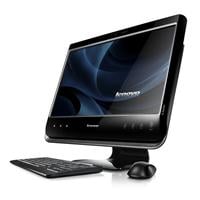 This is an entry level all-in-one PC, good for basic web browsing and email, this machine features a 18.5″ touchscreen which means you can work without a keyboard should you wish to while the Atom Processor and 2GB of RAM mean that it will easily handle basic tasks not only that but, it’s packing the Nvidia Ion graphics chip, so video playback won’t be a problem either. The small body and desktop footprint mean that it will fit in neatly to pretty much any space.

This is a guest Post by Andrew Johnson, expert in electronic products. For further information about desktops, laptops or if you are searching for a reputable computer retailer please visit Ebuyer.

Was this article helpful?
YesNo
TechPP is supported by our audience. We may earn affiliate commissions from buying links on this site.
Read Next
Lenovo Legion 5i Pro Review: Legion Or Legend?
#best all in one pc #guest-post #lenovo #samsung