This has to be one of the most promising tech concept of 2010. Infinitec’s IUM Drive (Infinite USB Memory drive) is a USB based dual WiFi device designed to allow a user to share their entire hard drive without running back and forth between PCs.

Make no mistake, IUM is not a Flash drive as it doesn’t contain any memory storage unit inside. It instead contains a small computer and 802.11n WiFi module within. IUM connects two PCs over an ad hoc WiFi network, thereby allowing content to be shared between the two computers. By computer, I don’t mean just a PC or Mac. It can be your Xbox 360 or DTH set-top box. This is why I referred the concept behind Infinitec IUM drive as ‘mind-blowing’. Let’s check if the final product is as exciting as the concept itself? 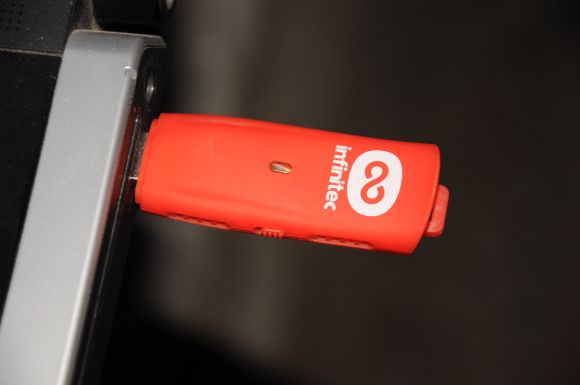 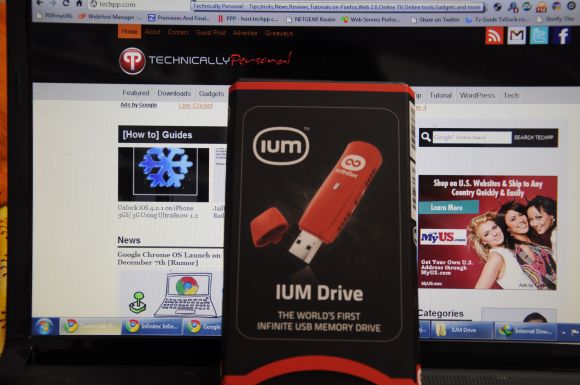 IUM has a very simple yet sexy design. The red colored USB dongle has curves and edges perfectly designed to catch your attention the first time you hold it. But the setup isn’t as simple as the design. Conceptually, IUM has a 802.11 WiFi module inside and hence can be used with any device with a USB port, irrespective of the availability of WiFi support, but you do have to pair the stick with a WiFi-ready host computer.

Pairing requires you to install the drivers and software which are included in the internal flash of the device. Once you install the drivers, in order to pair it with your Windows PC, you are required to assign it an SSID, password, choose your WiFi encryption settings and pick an “upload” folder for any items you might have copy onto the drive. You also need to choose how large the drive should appear to be to devices that you plug it into.

Though IUM supports infinite transfer and hence the transfer of the entire hard-drive, it is not as easy as right-click and choose to transfer. You need to manually select each file you need to ‘stream’ over the WiFi network. Once you are ready with your files, unplug IUM from the host PC and connect it to the secondary device and wait for at-least a couple of minutes for it to setup the connection automatically, assuming you had not made any mistake with the config settings.

Things can get worse depending upon the security software you are using. This is because, IUM is supposed to create a pair of firewall exceptions and also install Adobe AIR in the background. For me this happened without any issues on Windows 7. But on Windows XP, I had to troubleshoot a lot before I figured out the firewall exceptions. 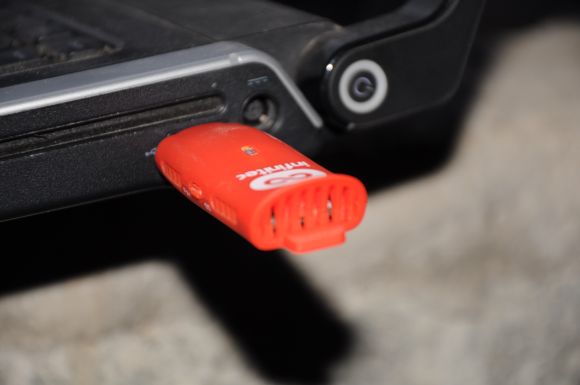 Initially when I tested IUM on my desktop PC, it took a good minute and a half to auto-connect on Wifi and show the files ready to be transferred. The actual transfer was painstakingly slow as it wasn’t even hitting 500KBps transfer speed. I then tried bring the host notebook PC close to the desktop PC and the transfer speed started clocking 3-4MBps! At this point even the HD video streaming was freaking fast. But IUM expects the devices to be very close to each other, which defeats the purpose of “wireless transfer”.

Not just that, even the resource usage is a major concern. The CPU usage of both the host and client PCs started spiking once the transfer was initiated. The fan of my Windows 7 notebook PC was at it’s peak speed, though the transfer speed was chugging along.

Though IUM doesn’t carry the “beta” tag, it shows why you must think before buying a debut product. Make no mistake, the concept behind IUM is amazing and can only get better from now. Infinitec has done exceptionally well to come up with the concept, but need to fix some of the basic limitations the device comes with. At $129, it is tough to convince many people to go for the intro version of IUM drive, but keep your eyes on them. They have every reason and chance to come up with a winner product in the near future.

Was this article helpful?
YesNo
TechPP is supported by our audience. We may earn affiliate commissions from buying links on this site.
Read Next
Skullcandy Mod Review: Betting on doing the basics well
#flash drive #gadget review #review