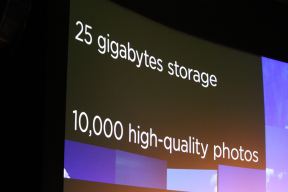 HTC’s new lineup of smartphones – HTC One X, HTC One S & HTC One V has to be the most leaked information at this year’s Mobile World Congress. HTC must have thought it’s fine to leak all the information before the actual announcement when they have a secret masterstroke up their sleeve – a new deal with Dropbox, which now offers 25GB of free storage for 2 years.

This should sound like music for our ears, considering Dropbox to be the most popular cloud storage service and by associating with them HTC will surely be able to sell more smartphones. Right? Wrong. Apple realized that having compelling devices is not enough to stay ahead of competition, for that one needs to have compelling services as well. iCloud is one such compelling service. Fortunately, HTC has realized the importance of having compelling services, but it is unfortunate that they are relying on a third party for that. I mean, you don’t really sell your phones using some other company, do you? Even I day-dream to sell millions of smartphones by having a deal with Talking Tom. That’s Lame.

Samsung was able to sweep away the competition with Super-AMOLED display technology in 2011. Apple did the same with their Retina Display technology in 2010 and Siri/iCloud in 2011. If HTC is hoping to emulate that success in 2012, it has to be in terms of their own innovation. I must note here that I’m really impressed with HTC One series of smartphones, for the fact that, irrespective of the price-points, all the smartphones will feature best-in-class camera tech and best-in-class audio tech. Their enhanced video services & enhanced integration to use the device in-car is also impressive. But relying on Dropbox to provide the edge in cloud storage is not impressive.

Mind you, the 25 GB free storage is available only on One series of smartphones right now and will be for 2 years after which users are expected to upgrade their Dropbox account (which costs $9.99 per year for 50GB storage) and the free period will last till the partnership between the two companies last.

Was this article helpful?
YesNo
TechPP is supported by our audience. We may earn affiliate commissions from buying links on this site.
Read Next
10 Best Free Cloud Storage Services for Backups and File Storing
#dropbox #editorial #Free Dropbox #HTC #HTC One S #HTC One V #HTC One X #icloud