biNu Transforms a Regular Phone Into a Smartphone With Cloud Computing

As you can see around the web, everyone is talking about smartphones, about how to make them more powerful and how to add more features to them. As we saw, with Samsung Galaxy S III, more power under its hood, more connectivity and bigger and better screen, the world was amazed.

But little did we realize that on a global level, feature phones outnumber smartphones 4 to 1. And it’s normal, because some of the best feature phones have smartphone-like features and can connect to the Internet via 2G networks. Although these networks are slow, and users have to grow a beard before they can actually do anything, there is still a solution.

biNu is a Java service that gives regular phones smartphone like features and blazing fast connections and apps. The service was developed by Gour Lentell and Dave Turner and it aims to “smarten up” feature phones, giving them cloud access to very fast apps. And because the rise in mobile phones is set to come to previously under-developed countries, feature phones will get another big boost in usage, and so, a service giving these phones extra features was needed, that service is now biNu.

What does biNu give us? 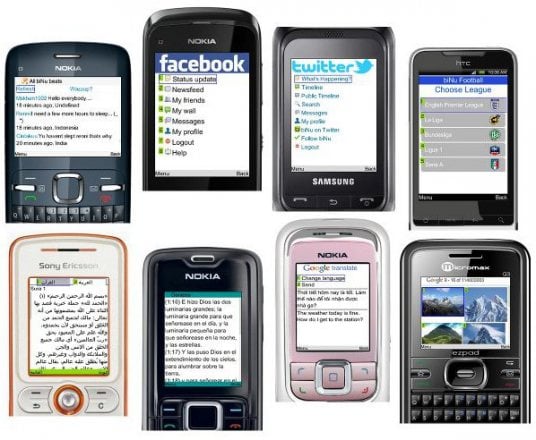 biNu can give its users access to news, social sites, email and much more and it only needs a 2G connection to do so. After connecting to the biNu cloud, you can have access to smartphone-like apps that work great and they allow quick switching between them, a feature reserved until now for smartphones only.

Also, users of biNu can surf the web via the Google Search app with much better speeds that the integrated browser of the phone using the biNu portal, also, biNu tries to give users content in their own language, so it provides quite a few customization options.

All in all, what biNu represents is a smartphone inside your feature phone, or a “cloud smartphone“. It will give you speed and apps that previously were available for smartphones. All this in a cloud-based service available for anyone with a 2G connection.

biNu is available on just about any platform, a full list of the supported devices can be found on their website. The service is pretty much available for anyone, although it was intended to promote the use of phones in African countries that are just now stepping in the world on mobile communications. For you to enjoy this service, all you need to do is visit their website and input your mobile number. A text message with a download link will be sent to you and then you can download biNu and start enjoying all its goodies.

How much does it cost?

For now, the service is free, but you will have to play your carrier’s fee for 2G traffic. Later on, things might change, but for now we greatly appreciate the services biNu provides for absolutely no money.

Oppo Reno 3 Pro Hands on: the most regular looking Reno…
[Tech ad-ons] Google Duo: Your regular next door ad
OnePlus Nord Review: Definitely Nord your regular Mid…
Redmi Note 11 Pro+ 5G Review: Bringing the regular…
Love bass? The Skullcandy Crusher ANC are available at HALF…
Apple M1 and its prospects for the future of computing on…