Now that Windows Phone 8 is now up and running, we can start playing with all the cool features that the new OS has. And one of those cool things is NFC support. Of course, Android phones had this feature for some time now, but the implementation in Windows Phone of NFC will make sharing a lot easier. Albeit Apple hasn’t introduced NFC in iPh0ne 5, they have still opted for Pasbook, which shows that contactless actions is one wanted feature.

The feature, called “tap + send” allows Windows Phone 8 users to send files to each other via NFC, but also allows cross platform sharing with Android devices. Although, it has some limitations, it’s still a big step towards multi-platform sharing of files in a very short time and with next to no effort. And it’s also nice to see Microsoft being open to help users from “rival” companies. 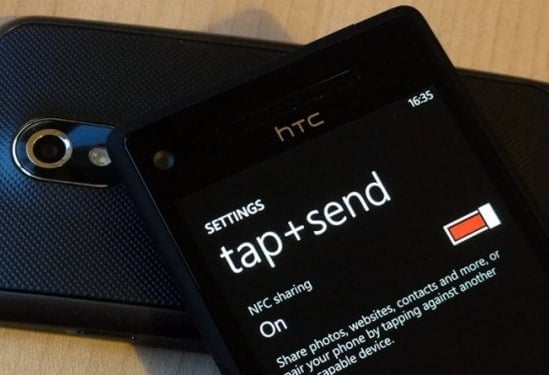 The process is fairly simple, on the Android device, you do exactly the same as with any other Android phone. Just bring together the two devices and the file will be transmitted. A pop-up message on the WP8 device will ask you if you accept the transfer and you are all done. However, on the WP8 device, you have to go into the menu, select “Share” and choose “tap+send”. The files will be transmitted immediately.

This method is perfect for sharing bookmarks, web pages or contacts, but it is, however, limited. If you try to send larger files, such as images or videos, it will not work. Although you can do this between two Android devices or between two WP8 devices, these files cannot be transmitted from one platform to another, but let’s hope a future version will solve that. If you want to see just how the files transfer between the two platforms works, check out this video where the process is explained in details.

Why do I need NFC?

NFC, or Near Field Communication lets us interact with other smartphones or devices wirelessly, at close distances and send or receive information. We have brought you some of the uses of NFC technology in the past, there we showed you how NFC can help with:

Although using NFC technology has its risks, it is still safer than other wireless connections, thanks to its limited operational range. It’s up to you to figure out if the advantages outweigh the benefits, but for me, I think it’s a great technology that can truly give us more use of our mobile devices. While some might bother comparing Bluetooth versions, others will instantly adopt this innovative feature.

We hope that the future updates to both operating systems will let users transfer bigger files and make the NFC a more wide spread method of sharing media and information between mobile devices. We all choose these smartphones because they have the ability to share information quickly and this is but the first step in a unified method of sharing, we hope that other OEM will implement it in the near future, and help us become more “connected”.

TechPP is supported by our audience. We may earn affiliate commissions from buying links on this site.
Read Next
How to Use Android Phone as Webcam for PC
#android #NFC #windows phone 8