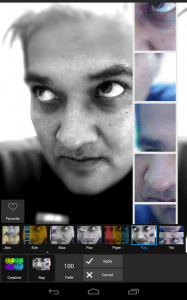 Rare is the person who takes an inch perfect photograph every time they get their mitts on their cameraphone. Which is one of the reasons why image editors are such a rage on mobile devices, from the relatively simple Instagram to the mightily complex and powerful Pages. Autodesk have already forged a reputation for themselves by attempting to deliver powerful formatting options through a simple interface through the amazing Pixlr-o-matic. Not content to rest on that particular pic tweaking laurel, the company has had another go at the keep-it-simple-and-deliver-stunning-results formula with Pixlr Express for iOS and Android.

The app is a relatively light download – around 11 MB on iOS and 5 MB on Android. You can start off by either choosing to take a new picture or selecting one from your existing library. That done, get ready to unleash editing hell, albeit without too much of difficulty. The app basically offers you editing options under four headings – adjustment, effect, overlay and border. In simpler English, ‘adjustment’ lets you play around with elements of the photograph. You can do stuff like sharpen, denoise, remove red eyes, add focal blur effects (yep, Bokeh), and of course, do the crop and rotate routine as well. And if you do not want to be bothered by all that, just hit ‘auto fix’ and hope for the best – you will be surprised at just how well it works. 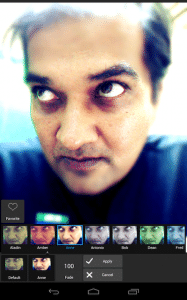 And that really is the tip of the image tweaking iceberg. For, believe you us, the real fun begins when you move to ‘effect’ territory. This is filter territory and Instagram fans will blush to see the sheer number of options being offered here – there are subtle touches, old black and white related add-ons, and some creative touches as well. And as if that were not enough, there are the ‘overlays,’ which add different effects (why weren’t they called ‘effect’ then? Ah, the joys of tech nomenclature), from making your picture appear like something on a cloth or a wall to plonking fireworks on your image (why would you want that? Well, it does look nice sometimes, trust us.) And no, that by no means is all, you can also get to pick the kind of border you want around your picture and once again, whatever the app lacks, it is certainly not variety.

You can also control the level of fade on an option on your picture, undo effects, save your picture (without compromising on resolution, we may add) and also share it across social networks and mail. It is difficult to ask for more. Yes, there are a few irritants – some of the editing options get downloaded when you first click on them, which can be a bit of a dampener when you start out (we recommend downloading the entire lot straightaway by tapping on each option when you download the app to prevent “oh hell, it is now downloading” groans). But for the most part, it is smooth sailing, although we would recommend using it on a relatively powerful device for fast results.

And did we mention that it is totally free? Well, it is!

Yes, many of the effects can be seen in Pixlr-o-matic too. But we love the arrangement and layout of Pixlr Express much more. The best free image editor in app town? Heck, to quote Marlon Brando in The Waterfront, this one is a contender. Take a bow, Autodesk!

Was this article helpful?
YesNo
TechPP is supported by our audience. We may earn affiliate commissions from buying links on this site.
Read Next
Voila AI Artist: Cartoon Yourself with the Power of AI
#app review #daily app #iOS app