Apple has quietly introduced a new 16GB iPod Touch model boasting a stripped down specs sheet at a cheaper price. This is not a new generation iPod touch by any means as it greatly resembles the fifth generation model which was announced early this year. It carries the same 4-inch retina display enclosed in a body of identical dimensions, powered by the same dual-core A5 processor and carrying the same FaceTime HD front camera. 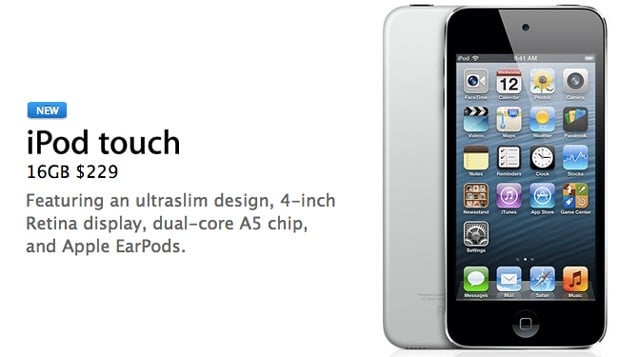 What’s changed though, is that the new model is just 16GB (as compared to 32GB and 64GB), and doesn’t have any rear camera (as compared to 5-megapixel shooter in the earlier model). And yes, it has lost some weight too (0.06 ounces). It seems Apple has decided to discontinue the sales of the older 4th generation iPod touch in favor of this new model, which is available to order in US apple online store for $229 with shipping in less than 24 hours. Surprisingly, it comes in a single black & silver design unlike various colors for 32GB & 64GB variants.

It’s interesting to note that Apple quietly listed the new 16GB model without even a press release (till now). There are a couple of things to consider here.

Is this aimed to revive a dying product?

It definitely looks like that. If you remember, the sales of iPod series has been going down over the past couple of years. Apple’s Q1 2013 earnings revealed that the iPod sales dropped by nearly 3 million units year-on-year. Yes, it does include all models of iPod, but the trends tell a story. People don’t really want to own an additional device exclusively for music and games, specially at a high cost. Mind you, fifth generation iPod touch starts from $299, which is not a small price at all. Now, Apple has come out with a cheaper $229 model (with stripped down specs), and should be hoping for a revival of a dying but extremely lucrative segment.

Will we see a cheaper iPad & cheaper iPhone soon?

The next logical guess is about the cheaper iPhone. The rumors of a stripped down & cheaper version of iPhone have been going around for a long time, but today’s news should give them a shot in their arms. Is Apple preparing the customers for a cheaper iPhone? Or is this just a part of their new approach aimed at the emerging markets?

TechPP is supported by our audience. We may earn affiliate commissions from buying links on this site.
Read Next
Is Apple Working on an Apple Arcade device?
#iPod Touch