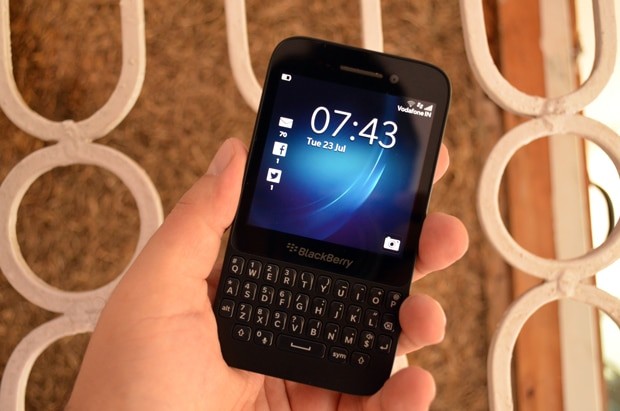 Very recently, this editor met with the India country head of a smartphone company, and caught him using a BlackBerry Bold 9790. Intriguing, since the outfit referred to isn’t BlackBerry, but one that makes touchscreen Android devices. When asked why he uses a BlackBerry as his daily driver and not a handset that bears the name of his own brand, his reply was, “I’ll switch, as soon as I can find something that can give me a matching email and typing experience.” And that, in a nutshell, is what BlackBerry is all about. This brings us to the shiny new device we hold in our hands — the BlackBerry Q5, a relatively affordable QWERTY-toting handset that’s entrusted with taking the BB10 platform to the masses. The BlackBerry Q10 is definitely more accomplished and appealing, but the Q5 offers something it can’t, and that’s affordability. Being the entry point into the BB10 platform, the Q5 is pretty much the most important launch for BlackBerry in a long time.

In a way, the Q5 does feel like a trimmed-down version of the Q10, and therefore, cuts down on the specs and a few connectivity options. We’ll point out the relevant details as we go along. In a lot of other ways, it matches the Q10, and we’ll also be referencing our review of the premium QWERTY at various points in this review. Without further ado, let’s put the Q5 under the microscope, shall we? 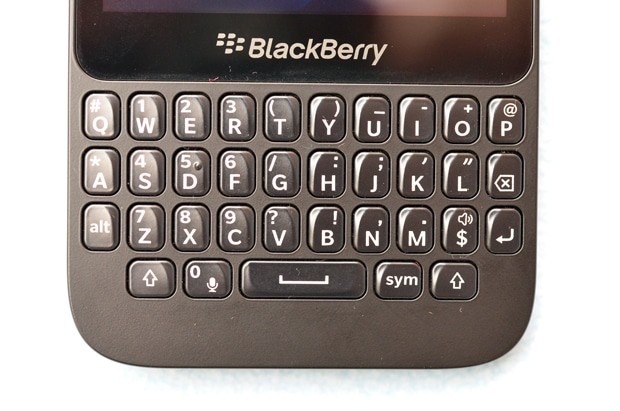 We think that the Q10 is one of the most well-built devices we’ve seen in the recent past, and as much as we’d like the Q5 to bring some of the same goodness, it’s clear from the get-go that this won’t happen. The BlackBerry Q5 is clad in plastic and comes in black, white or glossy red… with the latter being the standout color if you’d like to make a style statement. The build is quite decent and it doesn’t feel cheap, but then, it doesn’t really feel premium either and can’t match the Q10.

As far as the design is concerned, the form factor is the same — a square screen with a physical keyboard sitting below. The one aspect that stands out at first glance is the wide bezel all around the screen, and we think it’s a good thing since it makes the swipe-up gestures more convenient. A more significant departure from the norm is the use of a unibody design, and this is the first BlackBerry device that has this. This also means that the battery is sealed inside, and there’s a flap on the left that hides the slots for the micro-SIM and the microSD cards. 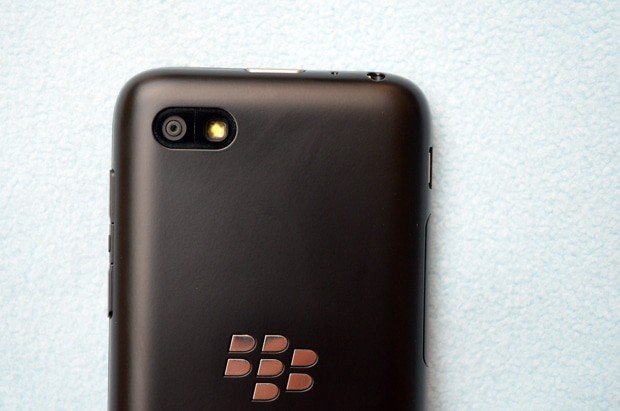 BlackBerry branding sits on the bezel between the screen and the keyboard, while the front-facing camera, the sensors and the earpiece are found on top of the screen. Apart from the aforementioned flap, the micro-USB port is also on the left. The right is home to the volume keys, with the voice command key placed in the middle. On the top, you’ll find a secondary mic, a 3.5mm audio socket and the power / sleep key, while the bottom is where the phone mic and the speaker are placed. At the rear, the large BlackBerry logo in Chrome will likely catch your eye first, and then you only need to shift your gaze to the top to check out the main snapper and the LED flash. A sticker carrying the regulatory info adorns the bottom.

The Q5’s display is exactly the same size and resolution as the Q10 — 3.1-inch and 720 x 720 pixels to be exact. However, while the Q10 had a Super AMOLED display, the one on offer here is an IPS LCD panel offering a pixel density of 329 pixels per inch. In terms of quality, it’s pretty good, with strong viewing angles and great sunlight legibility. The colors are vivid and the text and graphics are quite crisp too — no complaints there. 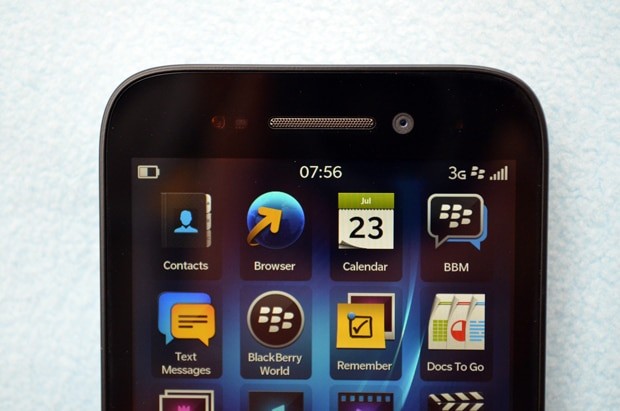 The only gripe, and a big one, is of course the aspect ratio. Typical of all fixed QWERTY phones, the Q5’s display isn’t ideal for media consumption and web browsing because of the square shape. However, this really goes with the territory and isn’t just an issue with the device in question… we believe anyone who opts for a device like this knows what he or she is getting into. 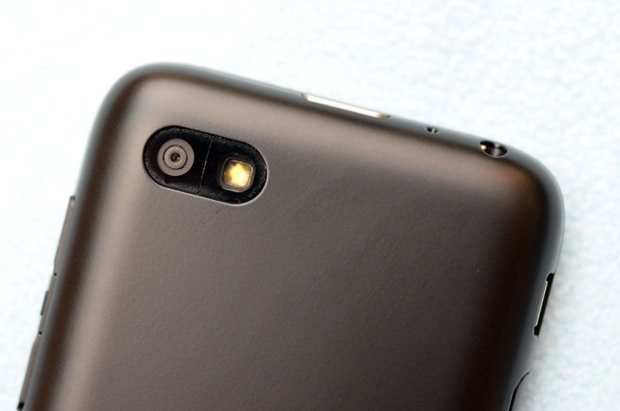 The main snapper on the Q5 is a 5-megapixel affair, as against the Q10 and the Z10 which boast 8-megapixel cameras. However, the front camera is rated at the same 2-megapixels. The features and the UI are pretty much the same, and the Q5’s camera offers the same touch-to-capture interface and 1080p video recording, along with niceties like an HDR mode and the Time Shift mode we’ve seen previously. In a nutshell, the latter lets you choose the best from a series of shots and make sure you get a nice group shot. A panorama mode is noticeably missing though.

As with the Q10, you also get to choose between 1:1 (square), 4:3 and 16:9 aspect ratios. The image quality isn’t bad, with stills and video captured in daylight turning out quite usable, but the quality goes down with receding light levels and as such, low light shots and videos tend to display a fair bit of noise. Not so much of a party animal this. 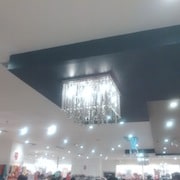 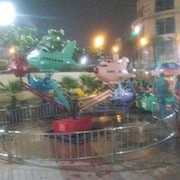 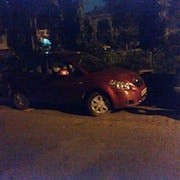 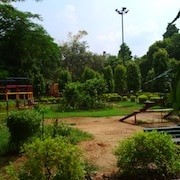 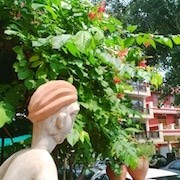 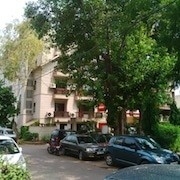 Running BB10, version 10.1 to be precise, the operation is exactly the same as the Q10, and we won’t go into too many details here. For a more detailed overview, please refer to the software section in our BlackBerry Q10 review. To put it in a nutshell, the Q5 offers the same swipe-driven interface, complete with swipe-up to minimize, swipe-down for the settings pane, swipe right for BlackBerry Hub and swipe left for the apps. Folder support, Active Frames, keyboard shortcuts and even Instant Actions that let you type out commands for calling, texting, emailing and BBMing etc are all there, and so are the features central to the BB10 experience, i.e. BlackBerry Hub and Peek. 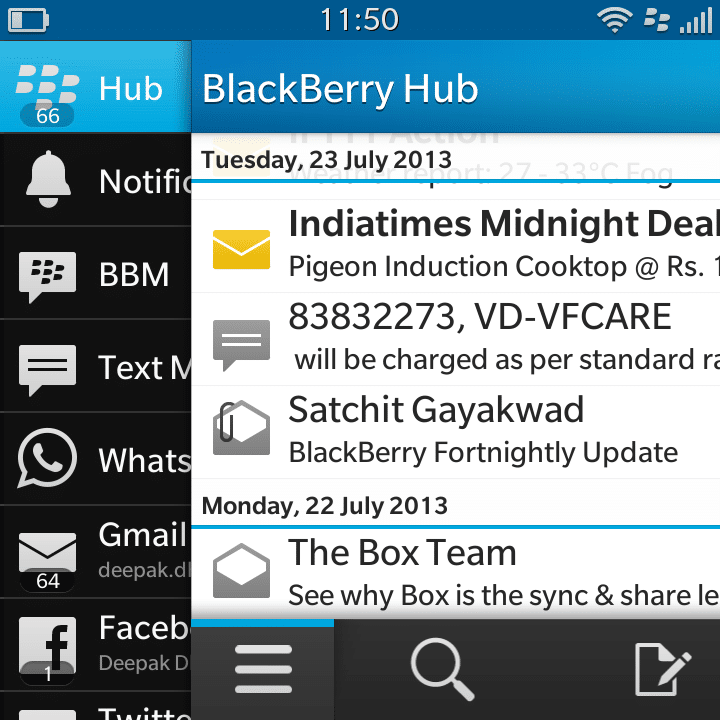 The important difference to note is that due to the gap between the screen and the keyboard on the Q5, swipe-up gestures are more convenient to perform and that bodes well for this handset since you need to do this action very often. The story is the same when it comes to pre-installed software, and as expected, the device plays well with social networks such as Facebook, Twitter and LinkedIn, along with cloud services such as Dropbox and Evernote, support for which is baked right into the platform.

The app ecosystem may be growing day by day, but there’s still no sign of the coveted Instagram, Flipboard, NetFlix and Google’s suite of apps. On the positive side, many of the other popular ones such as Whatsapp and Skype are yours for the taking. App junkies may not like it, but BB10 does offer a fair share, and it’s really up to you to figure out whether all your key requirements are covered or not.

The BlackBerry Q5 hides a 1.2GHz dual-core Snapdragon processor under the hood, down from the 1.5GHz chip that runs the show on the Q10. The RAM stays at 2GB, but the internal storage has been cut down to 8GB, a little over half of which is user accessible. This means you can’t really afford to leave that microSD slot vacant. A few connectivity options have been given the axe as well, and the one that’s immediately apparent at first glance is the missing micro-HDMI port. This may be a deal breaker for executives looking to use the device for presentations or those hoping to use it as a media player by hooking it up to a large screen telly. On the plus side, DLNA and NFC support is still there. 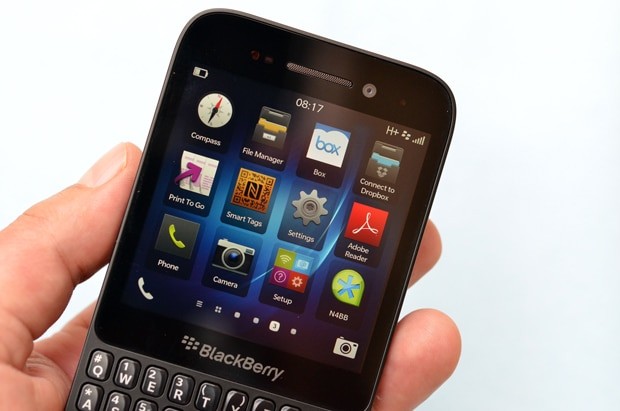 What’s also heartening to see is that the lower-specced CPU doesn’t really seem to have an impact on performance, and the goings remain almost as smooth as what we saw on the Q10. Transitions are silky, multi-tasking is breezy and you won’t find the device lacking as far as all day-to-day tasks are concerned. The square screen doesn’t make things exciting for movie or game lovers, but considering this is primarily a messaging device, you should be still able to find quite a few games (especially arcade ones) if you’re looking to kill a few minutes during the commute to work or while waiting for a meeting to begin. The on-board speaker’s fine for speakerphone use, but we’d recommend using a pair of headphones if you want to enjoy your music. Call clarity is superb — no gripes there.

The phone’s raison d’être, the keyboard, comes with flat, well spaced out keys that are reminiscent of the Curve series. They feel a tad plasticky and lack travel, and don’t really match up to the typing experience on the Q10 — something that those switching from any of the Bold models will notice immediately. However, they do their job well and once you get pally with them, allow you to type accurately at a reasonably fast clip.

When it comes to battery life, the 2,180 mAh pack sealed inside packs enough juice to keep the smartphone alive for well over a workday… but if you prod and poke at it all day long, you just might need to tank it up in the evening. 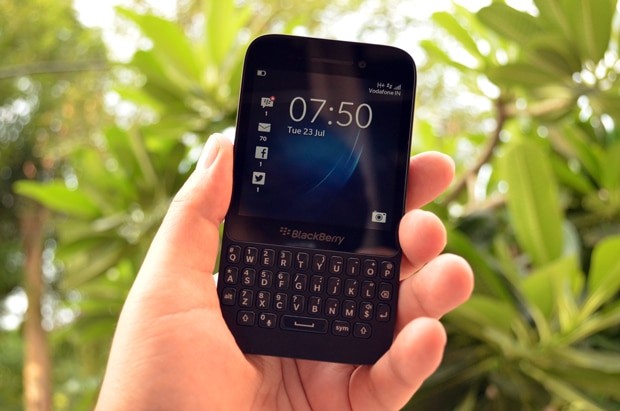 The affordable BlackBerries have been a lot about fun (apart from being faithful companions to execs) thus far — tools that quickly sparked a social revolution when thrust into the hands of excited youngsters, eager to connect with their BFFs and get in with the rest of the BlackBerry-toting crowd. The revolution was mainly due to the popularity of BBM as a free instant messaging service, along with the low pricing of the Curve series of handsets. Times have changed, however. Alternatives like Whatsapp have stolen BBM’s thunder and the slew of affordable Android smartphones have increasingly found their way into the hands of the user base that once swore by a BlackBerry. Let’s face it — priced at Rs 24,990 (~ $411), the BlackBerry Q5 is nowhere near Curve pricing (despite a Curve-like keyboard), not to mention the other options available at this price, the Nexus 4, for example.

The plastic body also leaves something to be desired and doesn’t feel at par with the price. On the other hand, the outlay involved isn’t the same what it was a year or two ago, and since the flagships are now pushing the Rs 40k mark, the Q5’s pricing is decidedly mid-end. ‘Relative’ is the key word here — the BlackBerry Q5 is definitely more affordable compared to its other two BB10-rocking siblings and is the cheapest device available if you’d like to get on board the BB10 bandwagon. The combination of this modern and intuitive OS with a physical QWERTY, and a brand renowned for its messaging prowess results into a device that could be exactly what you need, provided you’re looking for a handset mainly for calling and communicating over social networks, email and IMs.

Was this article helpful?
YesNo
TechPP is supported by our audience. We may earn affiliate commissions from buying links on this site.
Read Next
Stuffcool PB9018W Magnetic Wireless Powerbank Review: Actually the perfect iP...
#BB10 #Blackberry #BlackBerry Q5 #review