You don’t need to wait for April Fool’s day to prank with your friends or family. The methods and the jokes have changed significantly over the years, being now more and more complex and overwrought. The ultimate ways of making your friends to break out into laughter or craziness are now at your fingertips. 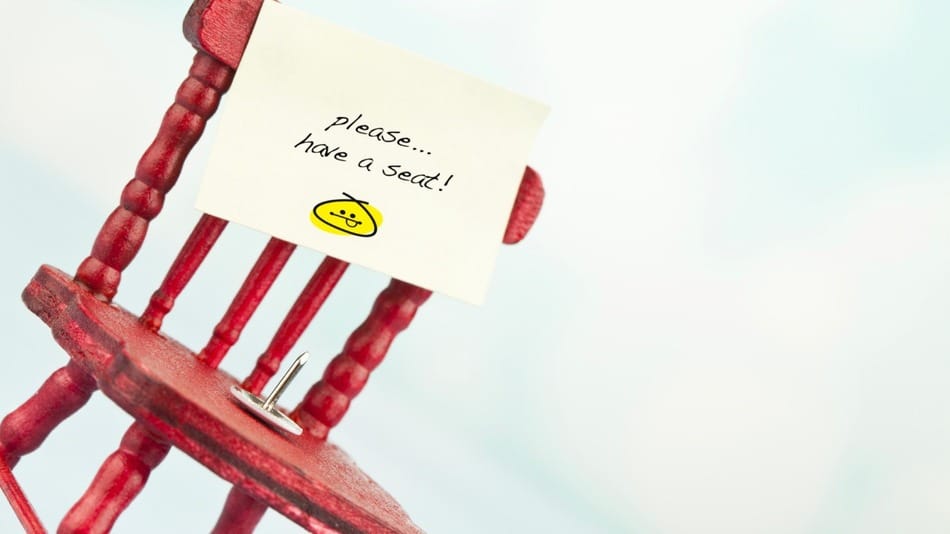 Bored of the same old pranks that your friends are making? Then it’s time to step a little further and make more elaborate pranks than the classical ones and what’s better than using your mobile device to do this? In this article, we’ve gathered around the best prank apps available for your mobile device, specifically the Android and iOS. 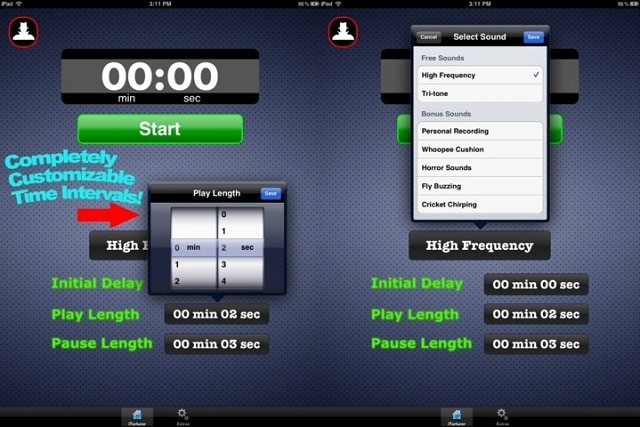 The sound pranks are ones of the most used and popular jokes that you could try on your friends and colleagues. The Prank* application makes the whole process easier because now you have the leverage of portability and you can use this whenever and wherever you want.

The application has the ability to create various sounds which can be very useful when you are in a crowded room. It’s one of the best solutions for pranking your relatives at a family dinner, by using one of the following sounds: High Frequency, Tri-Tone Text Sound, Whoopee Cushion, Horror Sounds, Fly Buzzing, Cricket Chirping and the new additions, White Noise and Cat Meow.

Also, the app has a great feature that lets users to record their own sounds right from their phone. It’s perfect for using it in loud situations when the other persons cannot locate the source of the sound and thanks to its high frequency sounds, it will drive your friends crazy. In this scenario, it’s best to pretend that you don’t hear anything so that you will annoy your friends more and the best thing is that they will not know that you are the source of the their madness.

Prank* is a free for download application and is available only for iOS devices. It can be downloaded from iTunes. The app comes only with the High Frequency and Tri-Tone as free sounds and for $0.99 the other can be unlocked. For another $0.99 users can also remove the ads within the application. 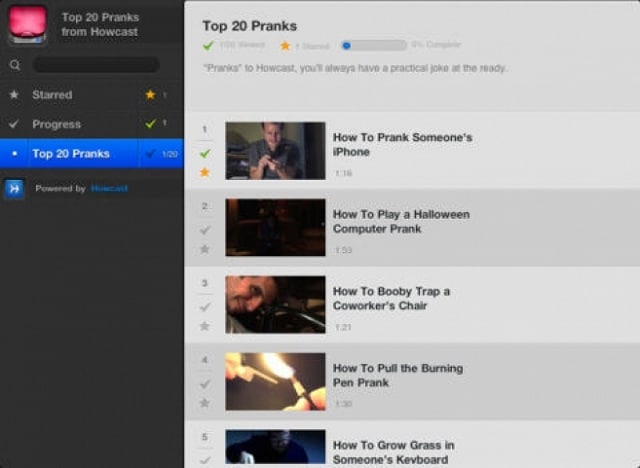 Top 20 Pranks from Howcast, a company that is specialized in how-to content, is an application that gathers around the most tricky and interesting pranks, jokes and gags. Whether it’s a simple one, like a prank call, or a more complex and ingenious one, like hacking your coworker’s computer, this app represents the starting point for each one of you.

The big advantage of this app is that it provides step-by-step videos for each prank so that even the beginners can use it. Using this application, users can discover how to set up their friends’ toilets, computers, showers, food and many more. Furthermore, the app permits users to track their progress, having at their disposal even a progress bar where they can check which videos they have already seen.

Another great feature is the one that permits to mark your favorite pranks so that you’ll find them easier. Just star them and search them in the “Starred” section of the app. Also, you can always pause, stop, rewind or fast forward your videos arbitrary. All of these features are embedded in this beautiful and handy application that offers the best pranks at just fingertips.

The application costs $0.99 and can be downloaded from iTunes. Also, be aware of the fact that the app contains a number of pranks that can easily turn your funny moments with friends into malicious actions that can affect them. 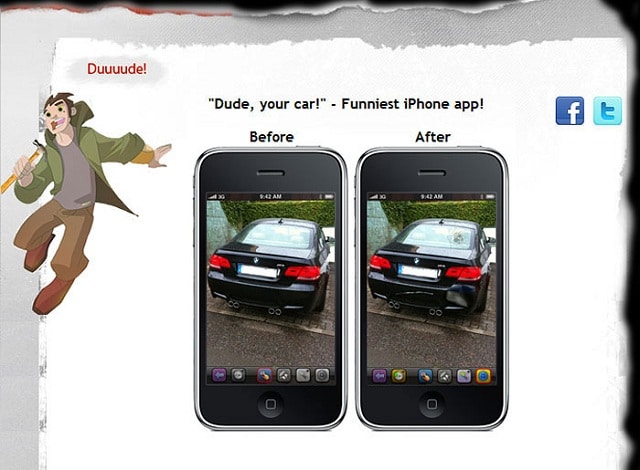 Dude, your car! is one of the best prank applications that were ever made. It’s perfect for bamboozling your parents by making them believe that something happened to their car. You can choose to let them thinking that their car was scratched or totally damaged, depending on how much you think that they can take.

Basically, everything goes like this: you have to take a new picture or use one from your camera roll, apply one or more damages to the car, adjust it (size, shape, orientation, contrast, opacity and more), save it and send it via email or your favorite instants messaging app. It will have an instant impact when the other person sees what “happened” with their car.

The damages that can be added using the app are categorized in: dents, scratches, broken glass, car boot, fire or smoke. Add one of them and create a hit-and-run accident that will drive your friends or parents round the bend. They will instantly break into a run outside to see what happened with their car and when they will actually see it, the surprise will be big.

The applications is available only for iOS devices and all users have to pay $2.99 for downloading it from the specific Apple store, iTunes.

April Fools Pranks is an application that has a big collection of pranks that can be done on April Fools’ Day or whenever you want. The app presents over one hundred ways of fooling your friends or colleagues, using only simple and ingenious techniques. In addition, it has a special section for every year where they have the best pranks of the year presented.

Also, the app permits users to rate the pranks and share them via their favorite social networks, like Facebook and Twitter, or by email. If you are interested in this application it’s good to know that is free for download only for Android mobile devices, so go to the following link and install one of the completest prank applications available on the market. 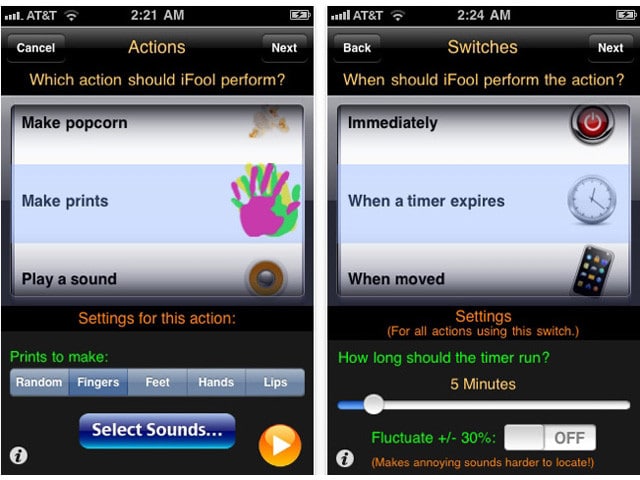 iFool is an application which impresses every user who tries it, because it’s very versatile, letting them to change the pranks so that they will be more suitable for the person that gets it. Users can find both simple and complex pranks that will confuse, shock or amuse their friends and colleagues.

The basic features that are included in the app are: 14 pre-made tricks, 60 images and 47 sounds. The good thing about the app is that the users can bring their own modifications to the pranks, so practically, they can edit the ones already provided or create new ones from zero. All of the tricks are combinations of only three parts: backgrounds, actions and switches.

The background represents the image that is displayed on your phone’s screen and can be a screenshot of your friend’s favorite game or a black screen making your device look that is sleeping. Furthermore, the actions can be a playing sound, an image, some ripples on the screen, fingertips, waves, etc., while the switches are the triggers of the prank, for example when somebody shakes the phone or when a timer runs out.

The application is available only on iOS devices, and can be downloaded for a price of $0.99. Also, developers offer a more comprehensive application, iFool Plus that is loaded with even more features (35 pre-made tricks, 150 images and 77 sounds) that costs $1.99. 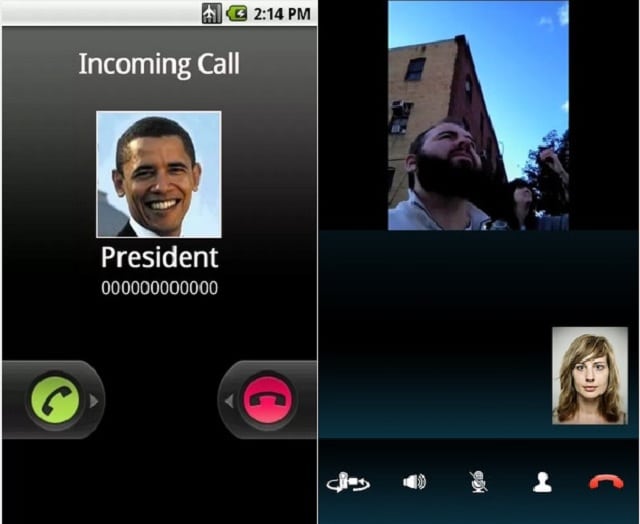 Was this article helpful?
YesNo
TechPP is supported by our audience. We may earn affiliate commissions from buying links on this site.
Read Next
NothingOS Made Me Realise How Much Overrated Pixel UI Is
#android #apps #Best Apps #ios