Apple seems to have managed to bring the hugely popular handset subsidy model to India. According to the Hindu Business Line (HBL), the Cupertino giant has signed a deal with Reliance Communications (RCom) who will be offering the 16GB versions of the latest iPhone 5s and iPhone 5c for Free on a 2-year contract, pretty much like how it works in countries like US & UK. RCom will offer unlimited voice calls, SMS and 3G data for a fixed monthly fee ranging between Rs 2,500 and Rs 2,800. The subscriber will have to sign a 2-year contract which will ensure that he is locked in to RCom’s network for that duration. 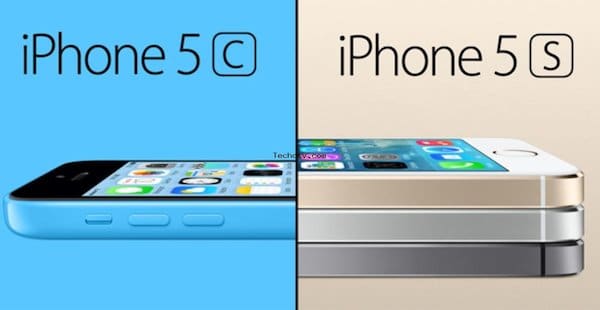 This is the first time ever we are seeing phone subsidy model being implemented for a leading smartphone in Indian market. There were reports of Apple pressing for this for a long time, but operators have been shying away owing to the concerns of subscribers dishonoring the contract and manually unlocking the iPhones themselves to be used on other carriers’ networks. Unlike the US, Indian telecom space comprises mainly of pre-paid subscribers who account for almost 90% of the user-base according to HBL.

Apple and RCom seems to have cracked the subsidy model as they will be restricting the offer to credit card users, thus putting the onus of user verification on partner banks like ICICI bank and HDFC bank.

Let’s try to understand the deal with an example. Consider the 16GB iPhone 5s model which comes with an MRP of Rs.53,500. Under this scheme, an RCom subscriber can get the iPhone 5s for free by signing a 2-year contract. He will be subscribing to a monthly plan of Rs.2,800 for 24 months, which would amount to Rs.67,200 at the end of 2-years. That’s close to Rs.14,000 over and above the MRP of iPhone 5s. But then, RCom is sweetening the deal by providing unlimited calls and data over these 24 months, which would roughly equate to Rs.583 per month. Not bad at all, isn’t it?

It’s important to note that RCom is yet to make the scheme official. HBL expects the announcement to be made later today. It remains to be seen if other carriers like Airtel and Aircel jump into the subsidy model bandwagon. We shall surely update you as and when we get to know anything.

Will you be buying the iPhone 5s under this scheme? If you’re not an RCom subscriber, will you be willing to make a jump? Do let us know via the comment section below.

Update: Reliance Communications is teasing the offer on its website here, but isn’t disclosing much. But we have some details from our sources who confirm that the offer mentioned above is indeed true, but the monthly subscription plan mentioned excludes the 12.36% service tax. With that added, the fee for iPhone 5c and iPhone 5s will become Rs.2599 and Rs.2999 respectively, which sours up the deal somewhat.

Also, RCom will be blocking the amount from subscriber’s credit card for a period of 24 months and will provide the bill every month. This is pretty much like any EMI scheme, but comes with a pre-loaded voice & data plan. We still await the confirmation and details on ‘unlimited’ plans from RCom.

Update 2: NDTV has more details on this. Truly unlimited calls and data with free national roaming. 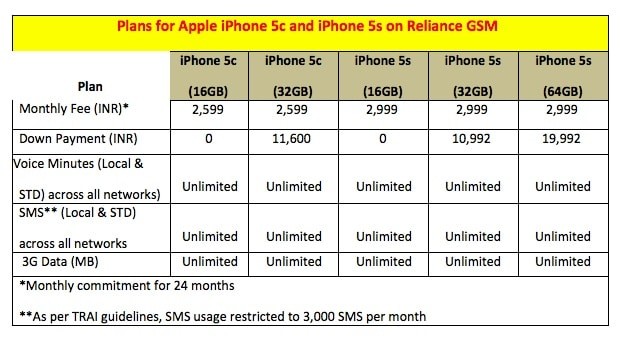 Update 3: We now have a clear picture of this ‘deal’. As mentioned above it’s truly unlimited data and voice plan, and the rates mentioned in the chart above includes the service tax. In order to get the deal you need to have a credit card from one of these 4 banks – ICICI, HDFC, StanChart and Citi. You will be blocked Rs.61,856 on your CC for the iPhone 5s (16GB). And then you’ll be paying Rs.2,999 to the bank every month. This means, if your credit limit is, say, Rs.90,000, almost Rs.62,000 will be blocked immediately, and you get to have a credit of just Rs.28,000 on your CC. Also, you’ll be paying a 15% interest on the loan which further increases the total money you’ll be spending on the iPhone at the end of 2-years. Since there are many people who don’t have a CC with enough credit limit to start with, RCom is offering an alternative deal, wherein, users can buy the iPhone outright by paying approx Rs.66,000 for the iPhone 5s and get the same ‘unlimited plan’ for 2-years. Thing to note here is that the iPhones are not locked to RCom for either deals.

In case you’re not able to make up your mind on this, here is my suggestion.