Crowdfunding is an awesome invention of modern times and it allows for the creation of impressive products by independent engineers and creators. Novena is such a new project aimed at hackers, as it’s a completely open source device built around open hardware designs. It runs open source Linux software and the plans for the printed circuit boards and everything can be downloaded for those interested in building their own version or customizing a pre-built one. 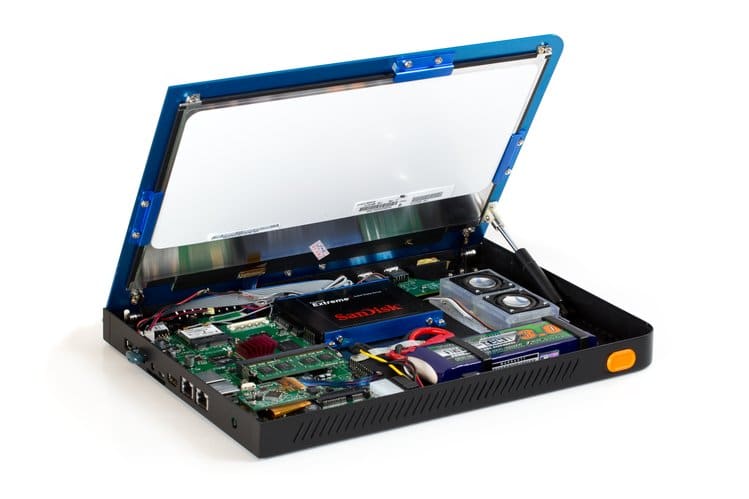 The bright minds behind this project are Andrew Huang and Sean Cross, who spent over a year working on the Novena laptop. Huang is widely credited as the man who broke open the original Xbox. Since the laptops and all the instructions are aimed at a small number of buyers, they aren’t exactly cheap.

Just the Novena board will cost you $500 and ships November this year while a pledge of $1,995 to the Novena campaign at Crowd Supply will land you a laptop with an estimated shipment deadline in January, 2015. The open source Novena laptop is powered by a 1.2 GHz Freescale i.MX6 quad-core ARM Cortex-A9 processor, 4GB of RAM, a 240GB solid state drive, a 45Whr battery, WiFi, HDMI, and Debian Linux for the operating system.

There is also an “all-in-one desktop” model available for $1,195 at a 13.3 inch 920 x 1080 pixel IPS display, but it doesn’t have battery and you also need to buy your own mouse and keyboard. If you really like this idea, you can get the exquisite “Heirloom Laptop” version for $5000, featuring a hand-crafted wood and aluminum case. Almost half the space inside the laptop case that it comes with is empty, letting users build a system with the features they’d like. Speaking of this project, Haung said the following:

To be clear, this is not a machine for the faint of heart. It’s an open source project, which means part of the joy – and frustration – of the device is that it is continuously improving. This will be perhaps the only laptop that ships with a screwdriver; you’ll be required to install the battery yourself, screw on the LCD bezel of your choice, and you’ll get the speakers as a kit, so you don’t have to use our speaker box design – if you have access to a 3D printer, you can make and fine tune your own speaker box.

This definitely isn’t a regular laptop, as it will come with a screwdriver to help you install the battery, attach a bezel around the LCD, and install a speaker kit, of course, of your own choice. Most of the inside parts, just like the Freescale processor, were chosen mostly thanks to the large amount of documentation available. At the time of writing this, the project has managed to reach more than 30% of its initial funding goal of $250,000 with 45 days left, so if the trend continues, they will most likely meed and pass the goal.

Another important aspect of the Novena laptop is that anyone with the needed skills and knowledge could make sure there are virtually no bugs and security flaws, which would ensure that the system would be completely secure, a concern that’s raising nowadays.

What we think of this
It’s not thin, light, cheap, and definitely not easy to use but it will definitely become an interesting proposition for hackers looking to create their very own customized rig.
Was this article helpful?
YesNo
TechPP is supported by our audience. We may earn affiliate commissions from buying links on this site.
Read Next
Acer Predator Triton 500 Review ft. Intel 12th Gen Alder Lake CPU
#Crowdfunding #Kickstarter #laptops