Just as we were telling you last week, the first Lumia phone not bearing the ‘Nokia’ moniker has been unveiled. The smartphone is officially called Microsoft Lumia 535 and its standout feature, besides that it’s Microsoft first Windows Phone device, is its affordable price – $130. 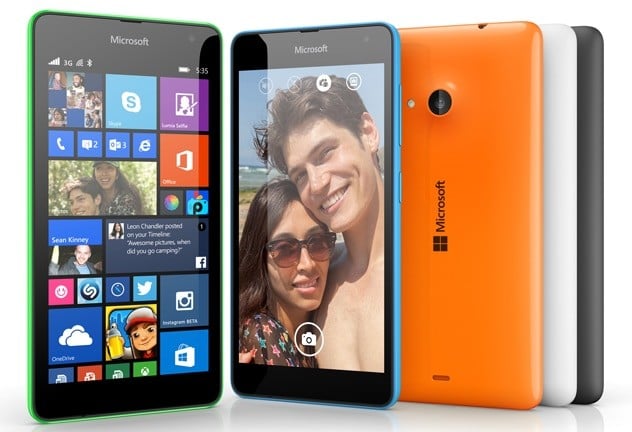 Microsoft is promoting it as a “5x5x5” package which brings a 5-inch screen, 5-megapixel front- and rear-facing camera, and free integrated Microsoft experiences – Skype, Office, OneDrive, Cortana, and OneNote. Microsoft has recently made its Office touch apps available for free to iPhone, iPad and Android tablet users, and this is valid for Windows Phone devices, as well.

The Microsoft Lumia 535 comes in 3G Single SIM or 3G Smart Dual SIM, running Windows Phone 8.1 and the Lumia Denim Update right out of the box (which brings features as one-swipe Action Center, Word Flow, Live Folders and Cortana). Despite its affordable price, the smartphone features the same wide-angle, 5-megapixel front-facing camera as the Lumia 730 and Lumia 735.

There’s a rear-facing 5-megapixel camera with flash and the Lumia Camera app for those who are not so interested in taking selfies. The smartphone has a 5-inch display, 1.2 GHz Snapdragon 200 quad-core processor, 1GB RAM, but just 8GB of internal storage. However, with a microSD card, you can get storage support up to 128 GB. There’s also 15 GB free of OneDrive storage, if you don’t feel like spending money for a storage card.

The smartphone’s thickness is at 8.8 mm and it weighs 146 g. Speaking of its battery, it comes with a maximum talk time on 2G of 11 h and a maximum music playback time of 78 h.

Following the ‘colorful’ tradition of Lumia devices,the Lumia 535 will be available in cyan, bright green, bright orange, white, dark grey, and black. There is also a special cover available for it which also allows owners to store credit cards. The Lumia 535 also supports Bluetooth LE and can connect to the Portable Wireless Speaker.

The Lumia 535 3G Single SIM and Lumia 535 3G Dual SIM will be available in selected markets in November, estimated to cost around 110 euros ($130) before taxes and subsidies.

Was this article helpful?
YesNo
TechPP is supported by our audience. We may earn affiliate commissions from buying links on this site.
Read Next
How to Request Read Receipts in Microsoft Outlook
#lumia #microsoft