Vivo is still a pretty much unknown company, but it wants to make sure that it enters the mobile market in style. The incredibly thin Vivo X5 Max has just been made official, according to the folks over at GizmoChina. The device is also set for an official launch in India 5 days from now, so make sure you write that down in your calendar. 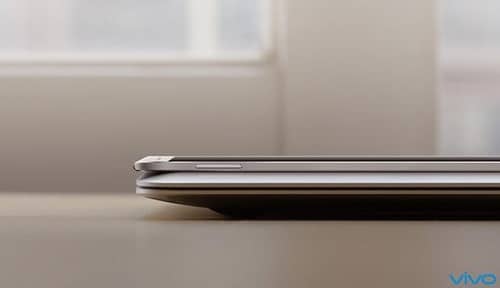 Said to be the world’s slimmest cell phone at just 4.75mm thin, the Vivo X5 Max 4G packs is the fruit of some smart engineering done by the guys at Vivo. They have managed to create a motherboard for the Vivo X5Max that is only 1.7mm thin, and the device also uses a 3.98mm chassis which is said to be the thinnest among all phones.

The Vivo X5 Max features a 5.5-inch 1080p super AMOLED display screen which is also the world’s thinnest screen with a thickness of only 1.36mm. So, if there’s one word that can describe this product, then you know it already – thin. To go on, it also features the world’s thinnest speaker box at just 2.45mm. However, this doesn’t seem to compromise the sound quality, according to Vivo. The smartphone also supports Hi-Fi 2.0, which, at the moment, could be nothing more but a marketing gimmick. 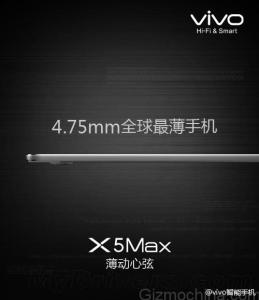 The handset is dual SIM, with one slot for a Micro-SIM card and another one for a nano-SIM card or TF card. The super thin smartphone is also 4G LTE-capable. As for Vivo X5 Max’s core specifications, you should know that it packs a 1.7GHz 64-bit Qualcomm Snapdragon 615 octa-core processor and 2GB of RAM. There’s 16GB of internal storage which can be expanded to 128GB.

The Vivo X5 Max comes with a 5mp front-facing camera and a 13mp rear-facing camera with a Sony IMX214 sensor. The device also comes with a Karaoke function and uses the YAMAHA YSS-205X CHIP, which is a feature that’s meant to make it a multimedia tool. As for the operating system, the Vivo X5 Max comes pre-installed with the Android 4.4.4-based Funtouch OS 2.0. We didn’t manage to find any details regarding its battery at the moment.

GizmoChina says that the phone will go on sale on December 22nd for 2998 RMB, which is around $485. However, an online shopping website – OppoMart – has the device listed for a price of $399. We will update this piece once we know for sure which is the right price, but we hope it’s the one that benefits consumers the most.

TechPP is supported by our audience. We may earn affiliate commissions from buying links on this site.
#vivo max