Whether you are a designer, a programmer or a hobbyist wanting to create some cool visual work, it takes you a few serious apps to make that happen. Since designers are known to have a long-term love affair with anything Apple, we’re pretty sure that most of you have an iPad somewhere around the house. The device is certainly lots of fun and comes with many compatible apps to download from iTunes. 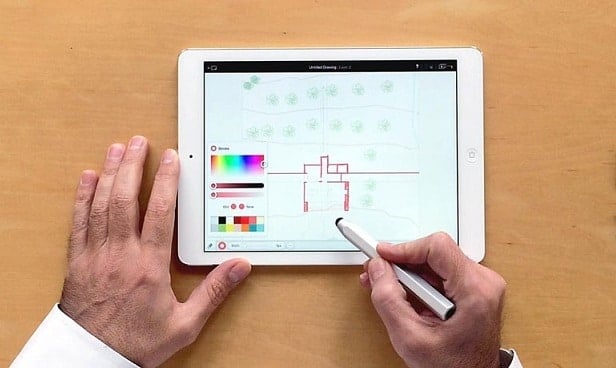 While some of them are cost-free, the other ones might require a bit of money, but they’re definitely worth it. It’s true that you might also need the power of a computer, more RAM, a powerful processor and so on, but the iPad can help you do some of your work while you’re away from the big screen.

SketchyPad, together with similar apps like iMockups, makes it easy to play around with various visual layouts. It comes with many pre-made items that you can use in terms of graphics, so that it saves you a lot of time. Instead of having to re-draw something that you use a lot all over again, you can simply insert it into the project.

Apart from that, it lets users to directly import photos from their albums, insert text and modify its font size, as well as the color. A pretty basic, but very useful and easy-to-use kind of application that you can get from iTunes for only $4.99. 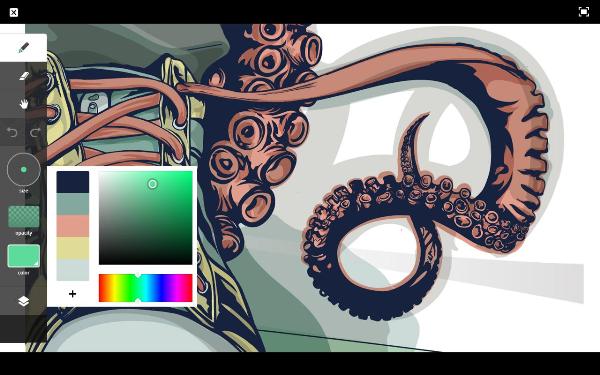 If you’re looking for a tool to use for basic drawing, Adobe Ideas might be a lifesaver. This app includes brushes that you can customize quite easily, as well as layers, Eyedropper, Eraser, many tools for drawing vectors and the usual undo/redo tool. The cool thing about the last one, though, is that you can use it for up to 50 different actions.

Once you download the free application from the iTunes store, you also get 2GB included cloud storage. In case you get serious about it and feel like you need a little more than just that, it might be worth getting the 20GB of Creative Cloud Storage for $2.24 per month.

The moment you get into it and start working, the software automatically keeps track of your most frequently used tools. This way, you can add shortcuts for easier access to these ones. Easy access is also provided for those who want to sync the work between different devices or share it with others.

SketchBook Express is very intuitive, comes in a bunch of different languages including Portuguese, Japanese and Korean, and it’s free to use. It can be used on iPads running on version 6.0 or a new one of the iOS operating system, and you can find it right here.

It comes with 3 different layers letting you build up a perfect design while you can also import more layers from your photo albums. You can merge, duplicate and rearrange any of these ones, scale, rotate and move the layers using multi-touch, but also adjust the opacity of each one of them.

If you tend to use iCloud for storing various existing projects, you can also opt for saving these ones on the cloud, as well. This allows you to switch from one device to the other one – just in case you like working on your iPad when you’re on-the-go, but go back to the laptop or computer when you get home. 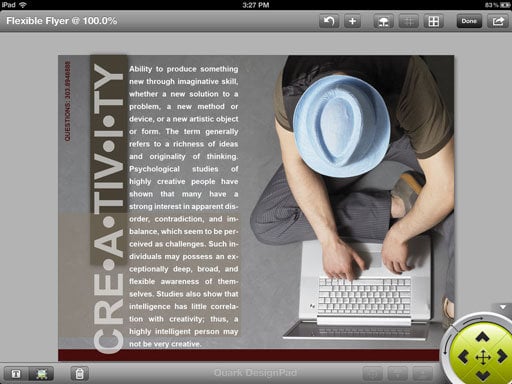 Layout designers out there will certainly appreciate Quark Design Pad. If you want the basic version, you can get it for free and start creating invitations, posters, brochures, postcards, business cards and many more. The grid-based design setup is easy to control, and you can insert text, images, as well as various shapes into the design.

The Pro Feature Pack for the same app can be downloaded for about $10, and it comes with Dropbox support, PDF export, plus much more options when it comes to the shapes you can use for designing. Both version are available in English, German, French, Italian, Spanish and Korean, and you can get them installed on a version equal to or higher than iOS 7.0.

As opposed to Adobe Air – an app that is suitable for the less experienced ones – iDraw is known to be a real graphics application. This one costs about $9 and comes with many advanced tools like the Bezier pen for drawing vectors and all sorts of illustrations.

Besides, it can also be used for drawing lines, curves and various shapes, adding text and images while you take advantage of the RGB color picker. The canvas can be easily imported from your photo library, and when you’re done working on a project, you can save it as a PDF, but also as a JPG, SVG or PNG document.

Coming only in English for now, the app received 4.5/5 stars from all user reviews. It requires version 7.0 or later of iOS and allows customers to save their data directly onto iCloud. This makes it easy when wanting to keep your projects safe while switching between multiple devices. 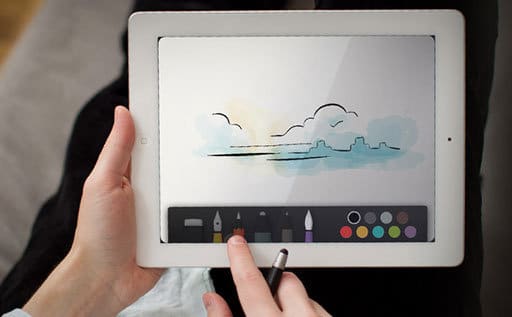 Paper is a sketchbook tool that can come in handy when you need to do some doodling or sketch up the designs you have in mind. The essential version lets you add text, use color tools, draw the outline and do as much sketching as you wish – all this for free.

You can take advantage of these tools in English, French, but also Russian, Korean, Portuguese and plenty of other languages. The application is very intuitive and not just meant for artists, but basically for anyone wanting to spend some time using their creativity.

Being so easy to use, it makes it easy to switch from a thinner to a thicker line while you’re drawing. You can also create your own pencil by choosing its color, how think you want it to be, adjust the surface pressure and many more that you can explore here.

FontBook is probably the cheapest app out of the ones you have to pay for. It comes with a large catalogue of typefaces to choose from, and they continuously update this one. With more than 730,000 of them at the moment, you can look them up by foundry, class, designer and many other features.

Once you used a font a lot, it adds it to your favorites so that you can find it right away. If you’re one who likes fonts and wants to experiment with different ones in creating a cool design, this might be just the app you’re looking for. It’s also available in both German and English, and you can get it installed on iOS v7.1 or newer version of the same OS.

This one’s another app that works well with the real professionals in the field. It pushes the iPad a little off its limits by offering a multiple display setup allowing you to drag and drop things from Photoshop. It costs somewhere around $10, and you can get it from the iTunes store right away.

Available for the iPhone, iPad and iPod Touch, but also for Android devices, Air Display turns any additional display you have into a multitouch second screen. This way, you can use Illustrator, Photoshop and another design app at the same time without losing track of everything.

Was this article helpful?
YesNo
TechPP is supported by our audience. We may earn affiliate commissions from buying links on this site.
Read Next
12 Best Free PDF Readers for Windows and Mac in 2023
#apps #Best Apps #Design #ipad