It is best known for its phones (and the occasional tablet), but Micromax has been eyeing the notebook market for a while, and now has officially entered it with the Canvas LapTab. As the name indicates, the device is an attempt to blend the best parts of a notebook and a tablet in one super compact package, all with, in best Micromax tradition, a staggeringly low price. 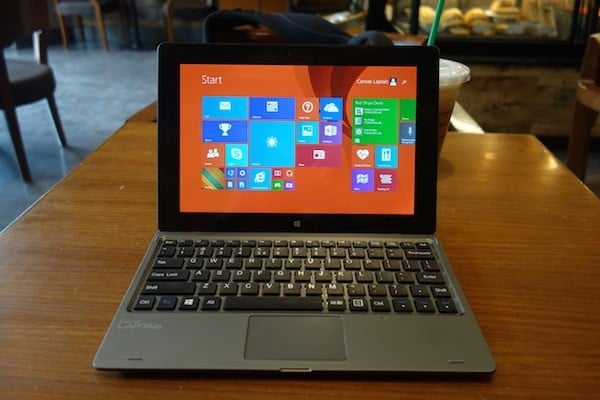 Speaking of which, we need to state the price of the device at the very outset, for it is, to in Raju PP’s rare forays into Hindi, its Suraksha Kawach (“protective armour”). No matter what the device’s critics say, what cannot be denied is that Micromax has managed to deliver a decent specced tablet and notebook combination at a price of Rs 14,999 (~$235). And before you say, “Well, Asus did the eeeBook for the same price,” we need to point out that that worthy (which incidentally, is a superb device in its own right), did NOT come with a detachable display that could morph into a tablet (well, the and well, there is the little matter of 3G as well – yep, the Canvas LapTab has a 3G sim card slot too). And the specs are respectable – a 10.1 inch 1280 x 800 display, 2 GB RAM, 32 GB storage a fourth generation quad core Intel Atom 3735F processor, Bluetooth, Wi-Fi, a proper USB port, a microSD card slot (with support for 64 GB storage), a micro-USB port, dual 2-megapixel cameras, a 7700 mAh battery and of course, that SIM card slot with 3G connectivity (this is the first notebook we have seen that comes with a SIM card extractor!). Oh and all this with the latest version of Windows 8, 8.1 and upgradeable to Windows 10, with an year’s MS Office in tow.

Right, so let’s start by conceding that just as they often have in phones, Micromax have managed to pull off a staggering coup in terms of price. Small wonder Microsoft and Intel were also seen at the launch of the device – in terms of sheer value for money paid, there is no doubt that this is a very good proposition.

Which in turn leads us to the question that most people ask about Micromax’s products -”yes, the price is terrific, but what about performance?” Of late, the answer to this query has been increasingly in the affirmative (check our reviews of the Canvas Knight and the Yureka, even though the latter comes from Micromax’s sister YU brand), showing just how far the company has come from its “modest price and performance” days. 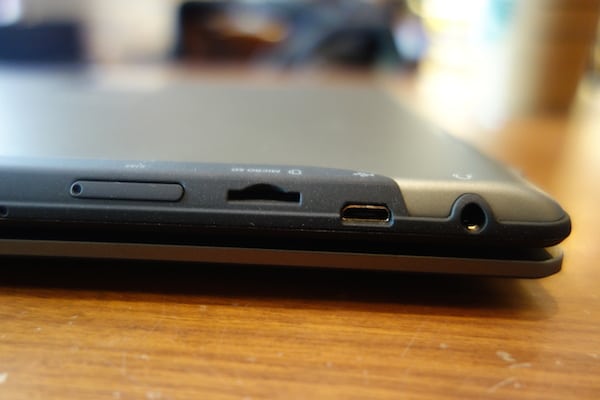 But has it been able to pull off a performance coup to match its price one in the LapTab? Well, the answer depends on what you expect, really. We have been using the Canvas LapTab for a while now, and we have found a lot to admire and a bit to annoy as well.

Let’s get started with the design. The LapTab is a bit of an odd bird in this department. It is an all plastic build and predominantly grey. And yes, seen together in folded form, it looks impressively slim and smart. It is slightly more than a kilo in weight and at 9.2 mm at its thinnest point, gets close to ultrabook territory. And for those wondering, we can assure you that it feels very solid.

Lift up the display/tablet portion, however, and the eccentricities of the design spring up at you. Literally. Unlike the Microsoft Surface which attaches magnetically to its keyboard, the LapTab is attached to the keyboard through a mix of magnets and a port. At one level, it is impressive, as when you lift the display, it actually snaps onto the port and magnetic connectors. However, once it is there, you realise that the connection is not a rock solid one. Pick up the notebook and try to pass it to a friend across the table and you will see the display wobble. Shake it too hard, and it seems set to fall off the keyboard. And that makes it more suited to desks than actual laps, if you know what we mean. And you are restricted to just one viewing angle. 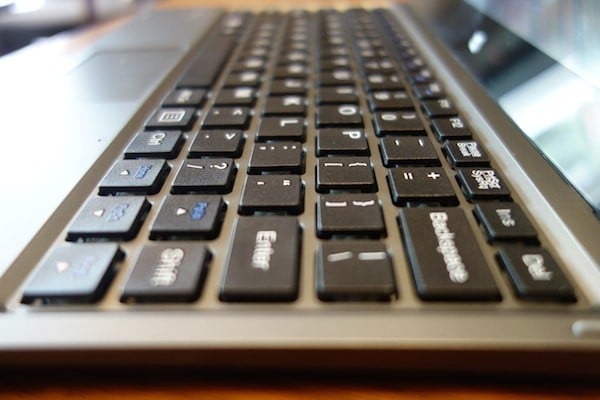 Mind you, there is a way around this – just yank the display off the keyboard and continue using it as a simple tablet. The display is reasonably bright and while the uber geeky might complain of viewing angles, we think it is more than adequate for most users. You don’t lose much in terms of connectivity when only using the tablet – all the ports of the device are on it, barring the USB one, which is on the keyboard. If you do need USB connectivity, there is a USB on-the-go cable with the box, which you can use with the micro USB port.

Truth be told, we found the device to be at its best in this mode. The tablet is very compact and Windows 8.1 runs quite well on it as long as you do not start trying to play hefty games, although it handled Angry Birds very well indeed. The keyboard dock actually is a bit of an Achilles Heel. Yes, it is a full keyboard, but the keys are painfully small – and no, that is not the perception of someone with dishplate hands (mine are big, I confess) but even those with dainty ones (all the three girls I showed it to, found the keys way too small). In many ways, this is the classic two-in-one device trap – the size of the keyboard depends heavily on the size of the display as the keyboard has to fit into a similar sized overall framework. It is the reason why so many iPad keypad covers are a pain to use. And well, it is the reason why the keyboard on the LapTab is a very mixed experience – yes, one is grateful for the keys sometimes (especially for extended writing sessions), but getting used to it takes a bit of time. I paired the tablet with a larger Bluetooth keyboard and the results were so much better in sheer typing terms.

But the blues of the keyboard and quirkiness of design are in my opinion, more than countered by three features: the fact that the device can be charged off a normal microUSB charger (yes, we used a phone’s charger to charge it), that it can easily see off about eight to nine hours of online usage on a single charge, and well, that SIM card slot which means that one does not have to lug a dongle around.

As for the actual performance, the Canvas LapTab is strictly in netbook territory we would say, right in there with the likes of the Asus eeeBook and the HP Stream 11. It handles tasks like word processing (yes, you get MS Word free as part of the one year subscription to Office 365), browsing the Web, social networking and even the odd spot of image editing and casual gaming (Angry Birds and the like) with ease, and with no lags whatsoever. Push it into high-definition territory however and like most netbooks, chinks start appearing in its armour. Our advice would be to not depend on it if you are the type that is into heavy desktop design, gaming or editing multimedia. It will play HD videos well, although we would have liked slightly louder speakers to be honest. The netbook similarity is accented by its battery life – careful use will see it into close to ten hours, while normal usage with brightness middled out would get you through close to 7-8 hours, as long as you do not get into gaming and videos 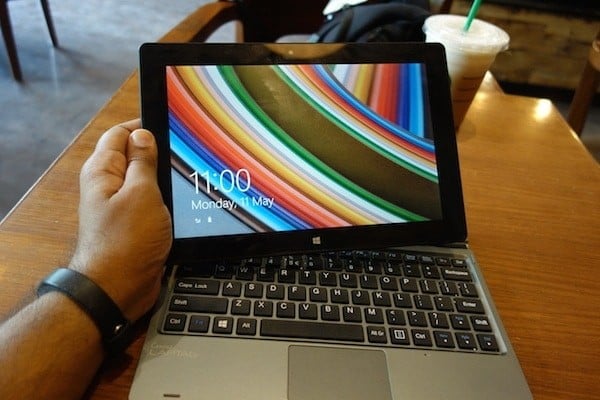 So where does that leave Micromax’s first visit to Windowsland (the non-smartphone one)? Well, there are some who have referred to the Canvas LapTab as a poor man’s Surface. We think that is being a bit cruel because the Surface while delivering much more, also costs more. The LapTab is not a perfect device but it delivers some very good features at a surprisingly low price – the tablet is very good, the connectivity options superb but the keyboard component falls short of our expectations. Had this been priced twice as much, we would have shaken our heads in disapproval.

Well, at that price, the Canvas LapTab is a great option for anyone looking for a tablet-notebook blend without taking too much of a financial hit. We would go so far as to say that the battery life, the micro USB charging and the SIM card slot make the tablet component alone worth a purchase for someone who wants a Windows tablet on the move. The keyboard needs serious work, though, and we really think the rear camera serves no major purpose, although the front facing one is decent enough for video calls.

It ain’t the Surface. Not by a mile. But it is very much Surface Clone and a very handy two-in-one with some very decent specs.

And that price-shaped Suraksha Kawach…

Was this article helpful?
YesNo
TechPP is supported by our audience. We may earn affiliate commissions from buying links on this site.
Read Next
Micromax’s IN a Red(mi), Real(me) World – no longer just about p...
#Canvas LapTab #micromax